Families of those incarcerated in Pennsylvania's state prison system say the Corrections Department is keeping them in the dark about their loved ones' coronavirus diagnoses and, in some cases, deaths.

An inmate died of the coronavirus, but Pa. corrections never told his family

Family members and advocates contend officials could do more when inmates get sick or die. 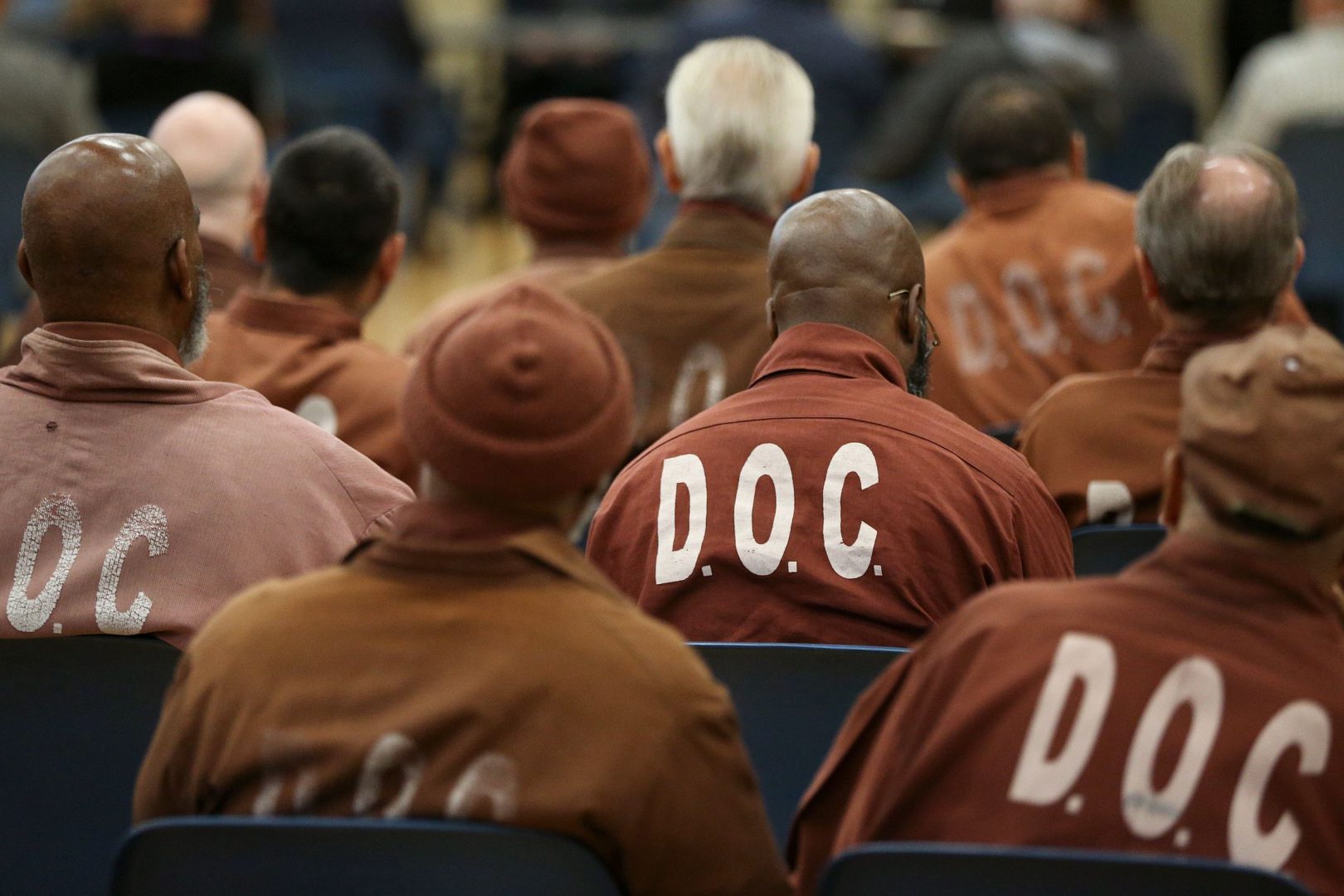 Families of those incarcerated in Pennsylvania's state prison system say the Corrections Department is keeping them in the dark about their loved ones' coronavirus diagnoses and, in some cases, deaths.

(Harrisburg) — Yvonne Newkirk would talk to her 60-year-old brother Edward Ball on the phone almost every day. He was serving time at a state prison in Luzerne County, where he would also write to her every week. Then, in mid-November, all contact ended.

After three weeks of silence, Newkirk was desperate, and asked prison officials where he was housed, SCI-Dallas, for help. But staffe there refused to give her answers, citing a federal act meant to protect a person’s private medical information.

For two days, she called the prison nonstop, and, eventually, a sympathetic nurse explained her brother had been hospitalized and intubated after a positive COVID-19 diagnosis weeks before, she said. Despite being his emergency contact and power of attorney, Newkirk said, she was never called, and prison officials wouldn’t tell her what hospital was treating him.

She guessed he was at the nearest medical unit to the prison, Wilkes-Barre General Hospital. But hospital staff wouldn’t confirm. She remembers staff telling her that, because her brother was a warden of the state, she needed to get any information from the Pennsylvania Department of Corrections.

When she called the prison back, the staff again denied her.

“They didn’t tell me anything,” she said. “They kept saying, ‘We can’t prove who you are over the phone.’”

On Dec. 11, Newkirk got a call from the Wilkes-Barre hospital. He was dead.

“[Corrections] didn’t even call to tell me,” she said, adding that a week later, they still have not talked to her about how to retrieve her brother’s belongings, or what happened to him.

Though the Department of Corrections has the discretion to decide when to release medical information, family members of those who are incarcerated — with the backing of prisoners’ rights advocates — told Spotlight PA they are kept in the dark as their loved ones face life-threatening illness and, in some cases, die.

Non-profit organizations and attorneys point to a waiver issued by the U.S. Department of Health and Human Services in March that gave hospitals the discretion to release such information to family and friends during a public health emergency. Similar notices were sent out during Superstorm Sandy in 2012 and Hurricane Katrina in 2005.

The Department of Corrections does provide medical care that parallels a hospital, but maintains that it is not one and that the waiver does not apply to it. Hospitals are given the latitude to communicate personal medical information to loved ones, but they defer communication about inmates to the department, which leaves families pleading with both for answers.

Claire Shubik-Richards, executive director for the Pennsylvania Prison Society, a nonprofit that acts as the state’s unofficial ombudsman for prisoners and their families, said this bureaucratic limbo has been a problem since the pandemic started. But it’s becoming even more common as positive cases of COVID-19 within state prisons are seven times higher than they were in the first seven months of the pandemic. Yvonne Newkirk with her brother Edward Ball before he died from the coronavirus.

“We’ve been fielding calls en masse during the first wave from families trying to find out what is happening to their loved ones inside prisons, and now it’s happening again during the second wave,” Shubik-Richards said. “There is a colorable argument that the DOC can do this, based on the way this waiver is structured.”

Melissa Levine — a HIPAA specialist at Hogan Lovells, a law firm in Washington, D.C. — said the waiver was meant to have a narrow focus and including prisons or other entities, even if they are required to abide by federal medical privacy laws, “would be risky.” If the U.S. Department of Health and Human Services meant for prisons to be included in the waiver, Levine said, it would have made that clear.

But attorneys in Pennsylvania who specialize in correctional medical care disagree.

They said prisons act as de facto hospitals in many instances. And the state corrections department’s interpretation is allowing it to duck the waiver and apply an overly strict standard for releasing medical information during the pandemic.

Matthew Fry, an attorney in Delaware County, who specializes in medical practice within correctional facilities, said attorneys could argue that the HIPAA directive was meant to include prisons since they contract medical providers and staff.

“The Pennsylvania code that dictates requirements of any facility, requires they have medical faculty on staff. How can you require medical staff and not be a medical facility?” Fry said. “It’s ridiculous.”

Veda Collmer, an Arizona-based attorney specializing in HIPAA compliance within correctional facilities, said families who are being denied access to any basic information should file a civil rights complaint through the U.S. Health and Human Services website.

“There is no exclusion for correctional health settings,” Collmer said. “They have to follow the rules as well. They do have to tell family members about their loved ones.”

Officials at Health and Human Services did not respond to several emails and phone calls regarding whether the waiver should apply to prisons.

Under normal circumstances, medical providers must get explicit permission to release patient information, such as where they are located, or information about a diagnosis. The state Department of Corrections requires the same process: inmates must fill out a form that lists people to whom officials can disclose medical information.

“In the event a family member would like any type of medical information (to include COVID) they should contact the respective SCI’s Correctional Health Care Administrator,” DOC spokesperson Maria Bivens said in an email. “The CHCA will ensure that there is a DC-108 (Release of Information) signed by the inmate, prior to sharing any confidential health information with the requesting family member/inquiring party.”

But Newkirk and other family members who talked to Spotlight PA said they were already cleared through the form. Even after securing power of attorney or being established as emergency contacts, they said they were not told of their family members’ COVID-19 diagnoses, hospitalizations, and — in two known cases — their deaths.

Maurice Thomas said he did not find out his cousin died from COVID-19 until another prisoner called to let him and his wife know. Anthony Reel, whose brother is incarcerated at SCI-Laurel Highlands and was transferred to a hospital due to COVID-19 complications, said prison staff told him it “was illegal” to speak to the hospital and wouldn’t tell him the location. Theresa Shoatz said she called SCI-Dallas nonstop for three days and had to goad a corrections nurse to tell her that her father, a cancer patient, had tested positive.

In an email Sunday, Bivens forwarded a statement from the department’s medical team that said it would not change its policy. The team said the waiver is “limited to hospitals,” and “the DOC is not a hospital and therefore not included in the waiver.”

A spokesperson for the state Department of Health, Nate Wardle, said it’s up to corrections officials to determine how HIPAA and the waiver might affect them.

Jeanne Coffey, whose cousin was incarcerated at SCI-Benner Township, said she has heard through other inmates that he has a “fifty-fifty chance, because he’s on a respirator.” She called the prison for three days, and each time officials there cited HIPAA when she asked for any details.

She said she wishes she could video call him, just as she was able to with other family members who have been hospitalized with COVID-19, to tell him that he’s not alone, and that she and her family love him.

“All I want to know is that he’s OK,” she said over the phone. “But they won’t tell us anything.”