Turnovers cost the Eagles again in another loss vs Browns

It was another tough day for Carson Wentz and the Eagles, plagued by inconsistency and injuries all season.

(Cleveland) — Kareem Hunt lifted off just inside the 5-yard line, soared over the head of Philadelphia’s Jalen Mills like an Olympic long jumper and landed in the end zone.

Without star Myles Garrett, the Browns needed someone to step up.

Hunt went above and beyond — and he wasn’t the only one.

Hunt hurdled Mills on a sensational touchdown run, Olivier Vernon made up for Garrett’s absence due to COVID-19 by getting three sacks and a safety, and Cleveland stayed firmly in the playoff picture with a wet 22-17 victory over the Eagles.

Hunt’s leaping 5-yard score came shortly after a dazzling 54-yard run by Nick Chubb as the Browns (7-3) finally found traction in their running game in a constant downpour.

“It was like he never stopped going up,” Browns quarterback Baker Mayfield said of Hunt, comparing his gravity-defying move to something out of a video game. “He jumped and just kept levitating. It was like a Super Mario double bounce.”

Cleveland also got a 50-yard interception return TD in the first half by second-year linebacker Sione Takitaki, and the Browns constantly harassed Eagles quarterback Carson Wentz despite playing without Garrett, the NFL’s sacks leader. 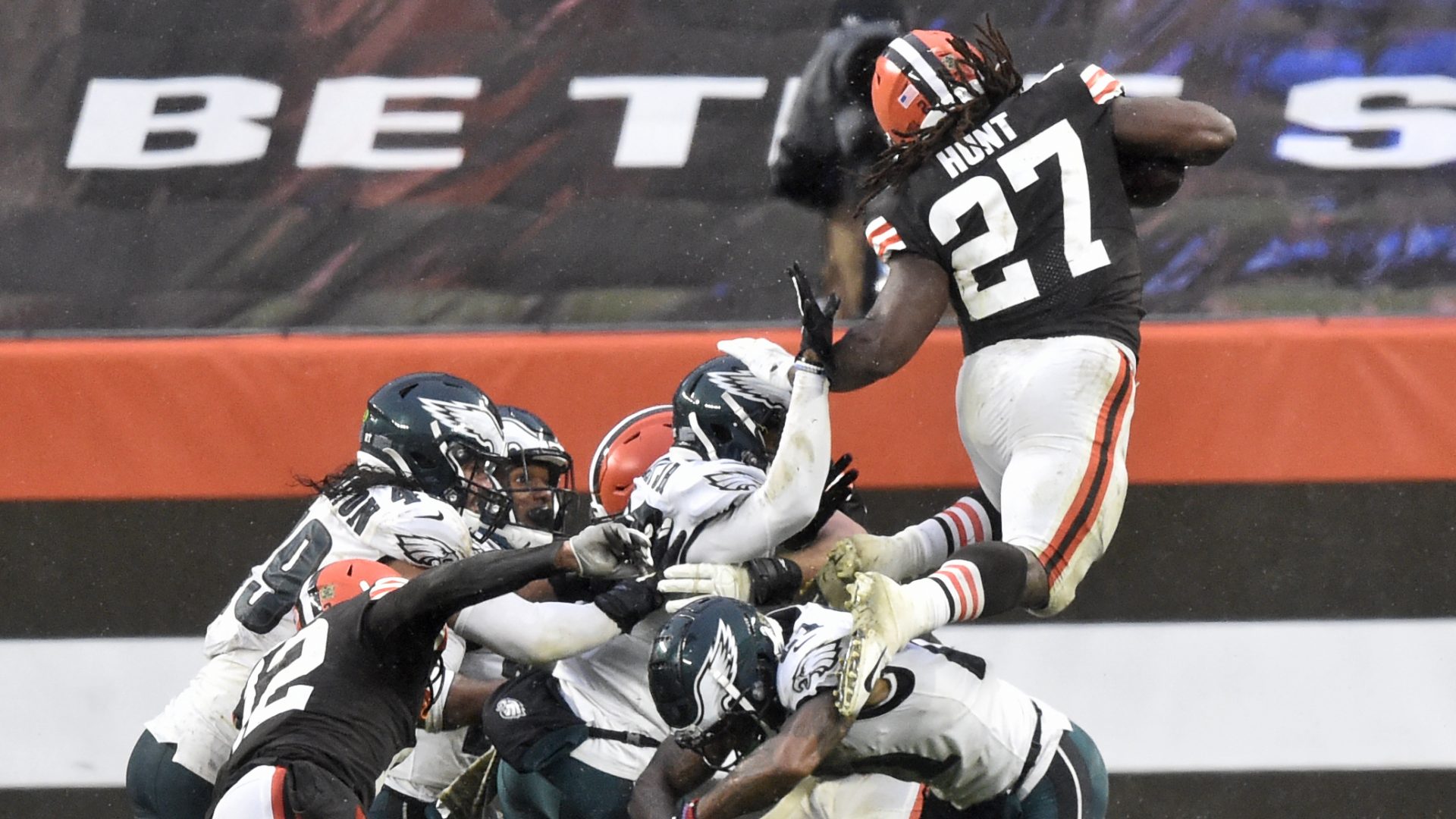 Cleveland Browns running back Kareem Hunt (27) rushes for a five-yard touchdown during the second half of an NFL football game against the Philadelphia Eagles, Sunday, Nov. 22, 2020, in Cleveland. The Browns won 22-17.

“I’m smiling and crying,” Garrett posted on Twitter. “I’m so proud of the DL.”

Wentz, who threw two more interceptions, pulled the Eagles (3-6-1) within 22-17 with a TD pass in the final minute, but the Browns recovered an onside kick and secured win No. 7 — one more than they had in 2019 — under first-year coach Kevin Stefanski.

On Friday, the Browns placed Garrett on the COVID-19 list to cap a week of challenges tied to the virus. It’s still not known when they’ll get dynamic end back, but his teammates stepped up and made the kind of big plays he’s known for.

“You lose a guy of Myles’ caliber, you are not going to replace him,” Stefanski said. “You need guys to step up, and it is a committee approach.”

Chubb and Hunt, who give Cleveland a devastating 1-2 punch, combined on the game’s biggest sequence in the fourth quarter.

After the Eagles closed within 12-10 on Jake Elliott’s 43-yard field goal, Hunt went on his long run, which included him flattening defensive end Joe Ostman with a stiff arm.

Two plays later, Hunt, who had just 11 yards on 13 carries, swept right and jumped over an unsuspecting Mills near the goal line to put the Browns up 19-10.

“We have the best backfield in the league,” Mayfield said. “There’s no question. I love watching those guys run.”

It was another tough day for Wentz and the Eagles, plagued by inconsistency and injuries all season. Wentz made a bad choice on his pick to Takitaki, threw a late interception — his 14th this season — and was sacked five times. Wentz has been sacked a league-leading 40 times.

“We are where we are because of the mistakes we’re making, coaches and players,” Eagles coach Doug Pederson said. “This is a test to see who’s in, who’s out. That’s where we are. It’s a matter of challenging the leadership of the football team, challenging the guys to keep things together. We still have an opportunity in our division.”

Vernon, who plays on the opposite side from Garrett, gave the Browns a 12-7 lead in the third quarter when he brought down Wentz in the end zone.

Wentz’s hesitation helped set up Takitaki’s easy TD. Philly’s quarterback ignored an open receiver and instead tried to swing the ball to Miles Sanders as he was hit by blitzing cornerback Denzel Ward.

Steady starting center Jason Kelce hurt his elbow in the first half, and his loss forced the Eagles to turn to undrafted rookie Luke Juriga, the 12th lineman used this season. Kelce played the second half in a large brace.

Left tackle Lane Johnson hurt his shoulder in the second half.

Despite a rise in COVID-19 cases across the country, the Browns are one of the few teams continuing to allow fans to attend home games. There were 12,000 soaked fans inside FirstEnergy Stadium.

Eagles: DT Fletcher Cox left with an apparent leg injury in the fourth. … DE Derek Barnett injured his knee, but came back and blocked a field-goal attempt. … CB Cre’Von LeBlanc rolled his ankle in the third quarter.

Browns: Cleveland hits the road at Jacksonville on Nov. 29.