New York Giants' Sterling Shepard (87) catches a pass in front of Philadelphia Eagles' Avonte Maddox (29) during the second half of an NFL football game Sunday, Nov. 15, 2020, in East Rutherford, N.J.

Phialadelphia's (3-5-1) leads the NFL’s worst division. Dallas and Washington are each 2-7. 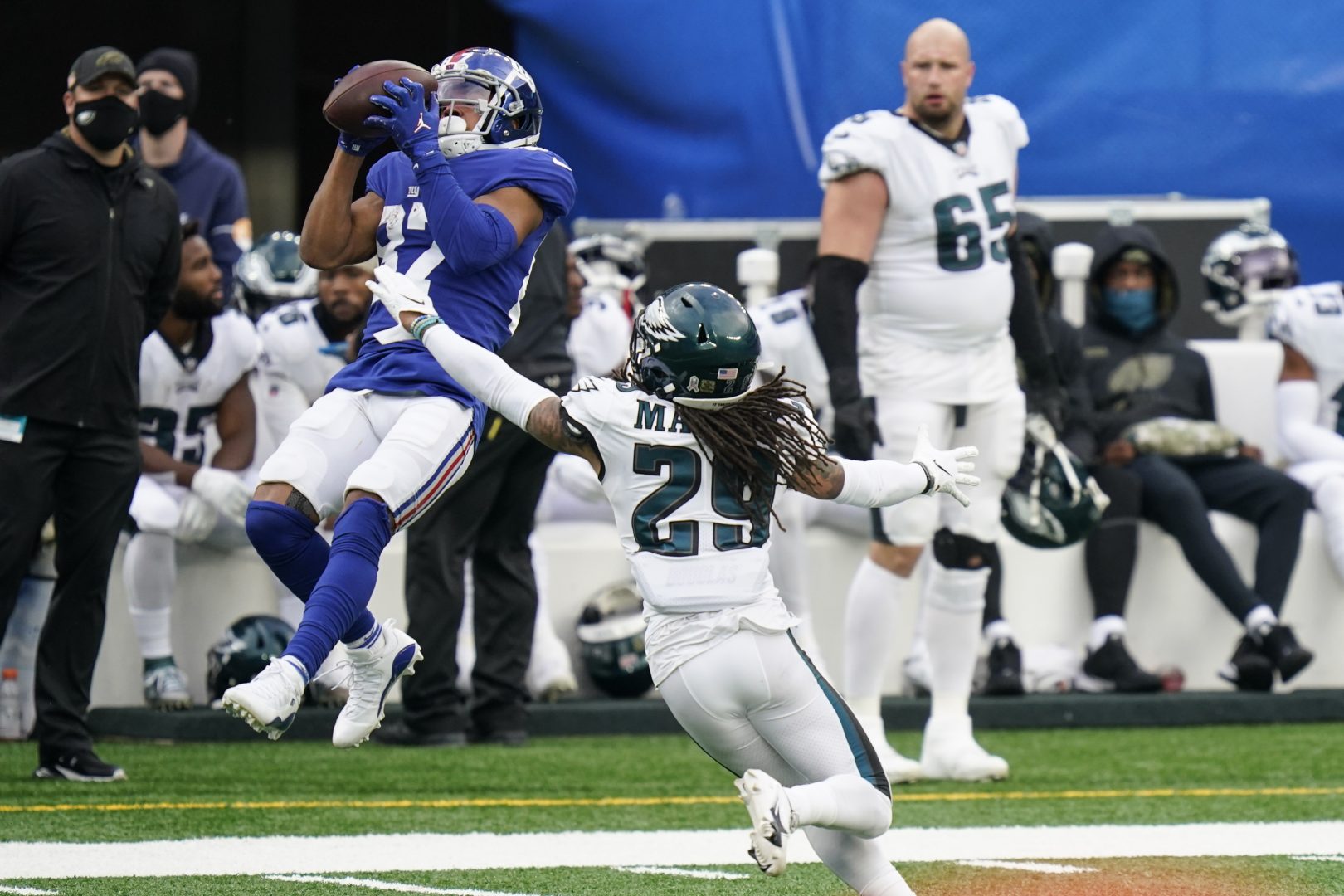 New York Giants' Sterling Shepard (87) catches a pass in front of Philadelphia Eagles' Avonte Maddox (29) during the second half of an NFL football game Sunday, Nov. 15, 2020, in East Rutherford, N.J.

(East Rutherford, N.J.) — Joe Judge isn’t looking at the standings yet even though his New York Giants are inching closer to the top.

Daniel Jones threw for 244 yards and ran for a touchdown, Wayne Gallman Jr. had two TD runs and the Giants beat the Philadelphia Eagles 27-17 on Sunday, making their case to win the dreadful NFC East.

The Giants improved to 3-7 under first-year coach Judge with their second straight win, snapping an eight-game losing streak against Philly.

The Eagles (3-5-1) still lead the NFL’s worst division. Dallas and Washington are each 2-7. 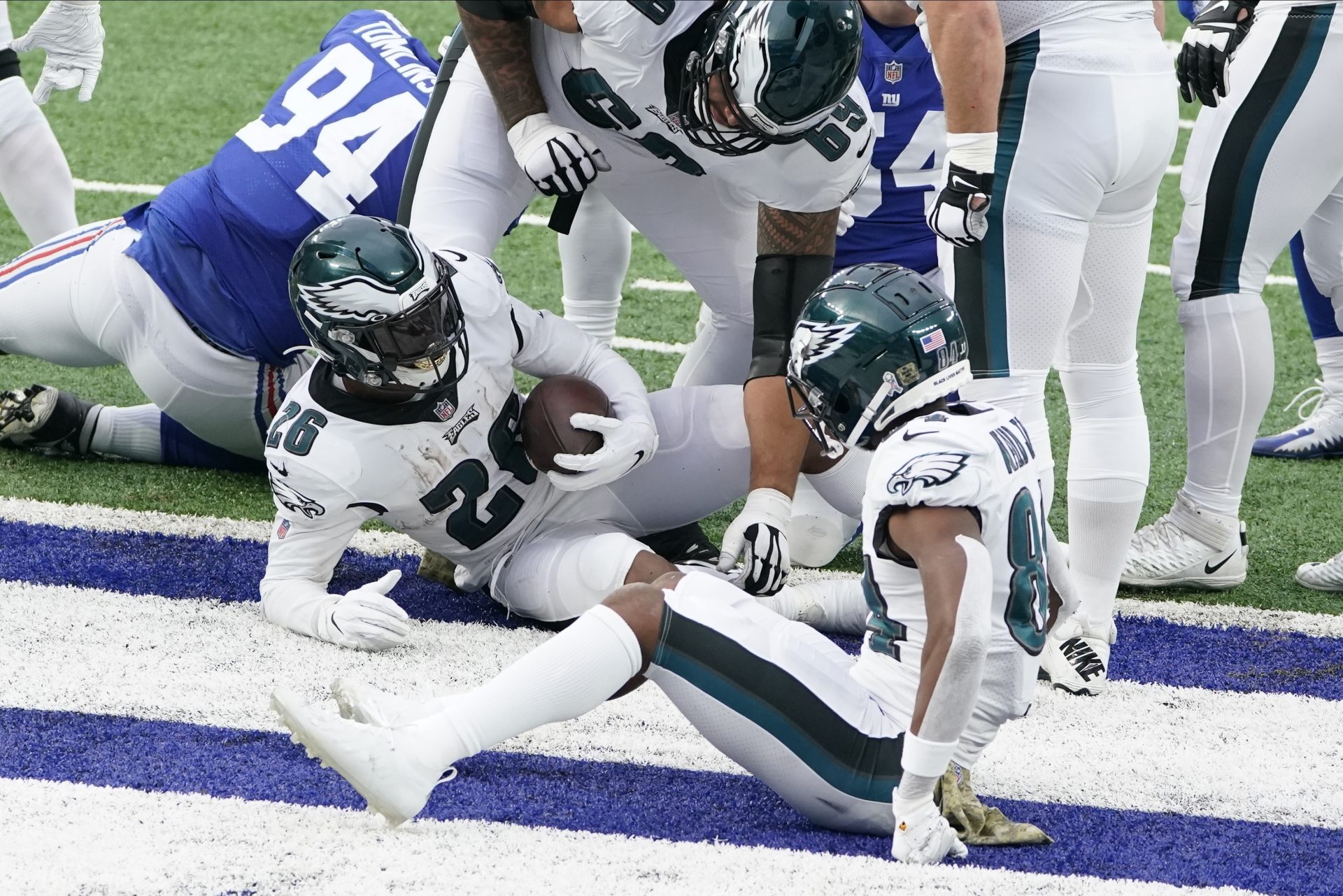 Philadelphia Eagles’ Miles Sanders (26) scores a two-point conversion during the second half of an NFL football game against the New York Giants, Sunday, Nov. 15, 2020, in East Rutherford, N.J.

“I’ll tell everyone right now, it’s irrelevant,” Judge said about the standings. “The only thing that matters is if we keep improving as a team and go 1-0 every week. The overall standings, we’re not going to look at those, we’re not going to focus on those. We’re going to have an emphasis on organization. We have to keep improving as a team to give ourselves a chance to be the program we want to be.”

Carson Wentz and the rest of Philadelphia’s offense were out of sync following a bye. They were 0 for 9 on third downs. Boston Scott had a 56-yard TD run early in the third quarter but the Eagles couldn’t get closer.

“We made it tougher on ourselves, left some plays out there, didn’t execute, 0 for 9 on third downs is frustrating,” Wentz said.

Jones ran untouched 34 yards for a score to cap a well-executed 85-yard drive to start the game and the Giants led the entire game. It was similar to Jones’ 80-yard run against Philadelphia in a 22-21 loss on Oct. 22 except he didn’t stumble at the 8 this time.

Jones finished with 64 yards rushing and the Giants had 151 on the ground.

“We were confident in what we were doing all day,” Jones said. “Offensively, we felt like we were executing and it was up to us to keep drives going.”

The Eagles were down 14-3 at halftime before Scott broke a long run and tiptoed down the left sideline. Miles Sanders ran in for the 2-point conversion to cut the deficit to 14-11.

But the Giants quickly answered with Gallman’s 1-yard TD run. Jones hit consecutive passes of 27 yards to Sterling Shepard and 38 yards to Golden Tate to set up the score.

Philadelphia came right back. Wentz completed a pair of 16-yard passes to Jalen Reagor and Greg Ward. Sanders ran 14 yards to the 5 and Corey Clement took it in from there for his first TD since Oct. 11, 2018. Eagles coach Doug Pederson chose to go for 2 and Wentz was sacked.

Jones had lost 16 straight starts to teams other than Washington.

“I think people are just sick of losing any game,” Judge said. “Whoever we play on a given Sunday, we want to win that game. They all hurt the same if you don’t come out with the result you want. It’s a division game so obviously it’s important to go out there and win for a lot of reasons. We wanted to make sure that we couldn’t come out today and leave any meat on the bone. We had to make sure we finished as a team to get the results we wanted.”

When Gallman leaped in from the 2 on fourth-and-1, the Eagles were down 14-3 just seconds into the second quarter.

“We gave them 14 early and we can’t do that,” Eagles defensive end Brandon Graham said. “We have to strike first.”

The Eagles got Sanders and wide receiver Alshon Jeffery back. Jeffery returned for the first time since he had foot surgery last year. He had no catches and one target. Sanders, the team’s leading rusher, was back after missing three games with a knee injury. He ran for 85 yards.

Eagles: LG Nate Herbig was a late scratch because of a finger injury.

Giants: RG Kevin Zeitler came out with a concussion.

Giants: Following a bye, visit the Cincinnati Bengals on Nov. 29.