Advocates say the county had more than enough time to prepare 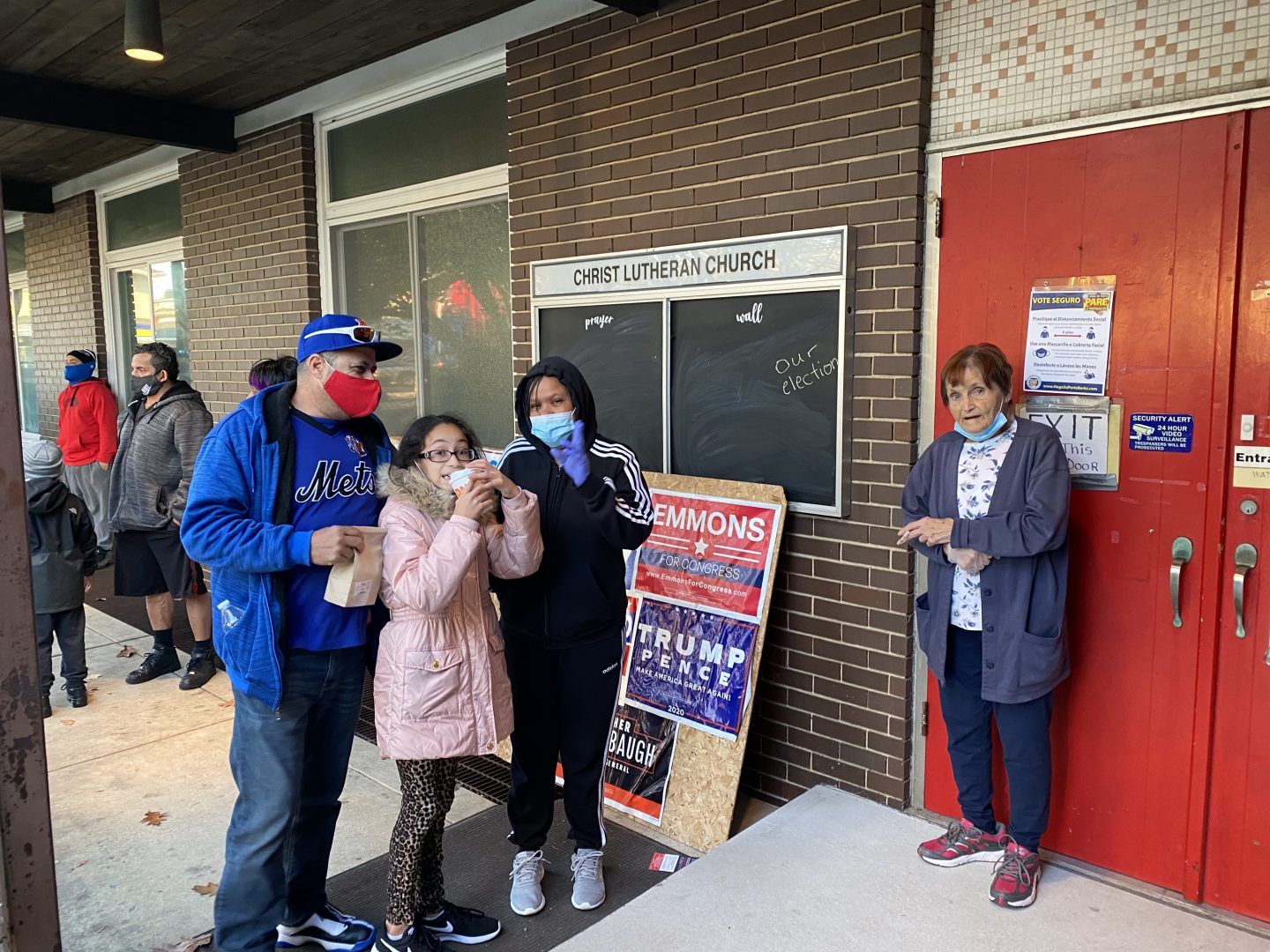 (Reading) — At a time when Black and Latino voters were considered key constituencies by both presidential campaigns, Berks County drew attention last week over a Reading polling place that was not suited for the community’s Spanish-speaking population.

Berks County election leaders say poll workers at the location were “mismatched” for the Latino community they served, unable to efficiently locate Spanish last names in the polling place registry.

In a hotly contested presidential election, the misstep is exposing a cultural competency gap. Latino advocacy groups are saying the incident is yet another example of how Berks has shortcomings when serving the city’s Latinos.

“Berks County knows, after having been sued for not providing adequate services under Section 203 of the Voting Rights Act, the Spanish-speaking people that they had an obligation to be equipped for,” Gonzalez said. “So if you’re saying that it’s not suppression, then it’s malfeasance or it is a lack of caring, or misconduct.”

Ceiba was among a coalition of advocacy groups that worked with Berks, Lehigh and Philadelphia counties to make sure they were ready to serve Spanish-speakers for this year’s primary and general elections. 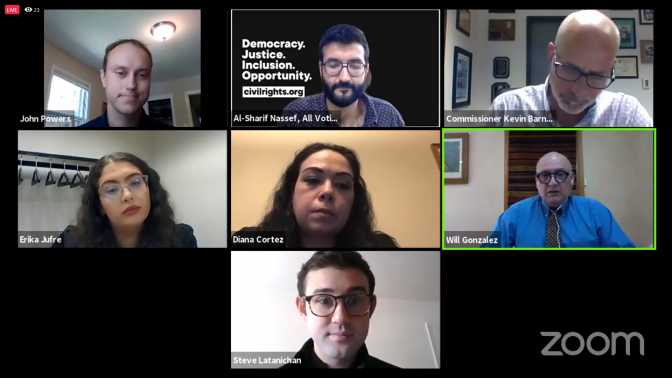 Will Gonzalez, CEO of Latino advocacy group Ceiba, moderates a panel discussion in the lead up to the election about how Berks, Lehigh, Philadelphia and the state are meeting requirements of the Voting Rights Act of 1965 for Spanish-speaking voters. (All Voting is Local Facebook page)

He referred to a 2003 federal lawsuit that resulted in the county having to abide by Voting Rights Act requirements for its Spanish-speaking population. Currently only Berks, Philadelphia and Lehigh counties meet the threshold for such bilingual requirements: 10,000 voting-aged residents who speak a minority language or a language minority makes up more than five percent of all voting age citizens.

Berks spokeswoman Stephanie Weaver said the county is owning up to the problem and looking to take steps to ensure it does not happen again.

“The county does not believe there was anyone intentionally trying to make the process difficult for these voters,” Weaver said in a written statement. “[B]ut, we feel it is the county’s responsibility to provide better resources at precincts with large Latino populations, so that this problem does not persist.”

The county does not have specific hiring plans outlined at this moment, according to Weaver. Election leaders will make a concerted effort to recruit bilingual poll workers and discuss such plans once the current election is behind them, she said.

Mayor Eddie Moran says he is doing what he can to ensure everyone voters.

The line to vote at Reading’s 19-02 precinct at Christ Lutheran Church did not have hundreds of people in it or wrap around the block as seen in other areas of the state.

Rafael Hernandez, 57, waited more than three hours to cast his vote. He said he felt lucky to even fill out a ballot for the presidential election.

“I don’t know what the reason would be, but to me it looked like the people working there were not adequate for this job,” Hernandez said in Spanish. “It’s like they’re lost — one person says one thing, another person says another, they look [for the name] in one book and in another book; it’s a mess.”

Hernandez is among thousands of Puerto Ricans in Reading who are American citizens by birth and primarily speak Spanish.

The precinct is located in an area where 40 percent of the people live in poverty and 42.5 percent of households are limited-English and Spanish-speaking, according to U.S. Census estimates.

Election Judge Rose Althouse told reporters Tuesday morning they were having trouble locating some Spanish last names. An elections judge reportedly told one journalist the issue was caused by “all the Spanish people and their last names.”

Many Latinos use two last names: first the paternal then the maternal, sometimes hyphenated. Names, like “Hernandez,” are not pronounced the same in English and Spanish.

Weaver gave this overview of how county poll workers checked in voters:

“The general concern is that it appears the poll workers at this precinct were mismatched with the community, which led to misunderstanding during the registration process,” Weaver said. “Many of our poll workers are older residents who are receiving very little pay for their service.”

Long lines persisted into the evening, with the last voter getting into the church after 9 p.m.

Weaver said the county is unaware of anyone being turned away from polls or leaving the line. No would-be voters left the line, while interviews for this story were being conducted at the polling place. But, multiple voters in line said they believed some likely left or did not even try when they learned how long it was to cast a ballot.

“The county also will attempt to have additional interpreters at precincts such as this one so that they can assist with not only translating ballots, but also at the registration table,” Weaver said.

Late Tuesday night, Weaver addressed issues at the polling place in a written statement that said the polling place had a live interpreter all day and “they had no issues providing services, it was just a busy precinct.”

Voter advocates say turnout was long-expected to be high and should not be an excuse.

But the number of voters in the precinct was less than in previous presidential elections. In the 2016 race, 566 voters cast a ballot as compared to this year’s 495 voters, according to this election’s unofficial tallies. In 2012, 589 people voted for president at the location. 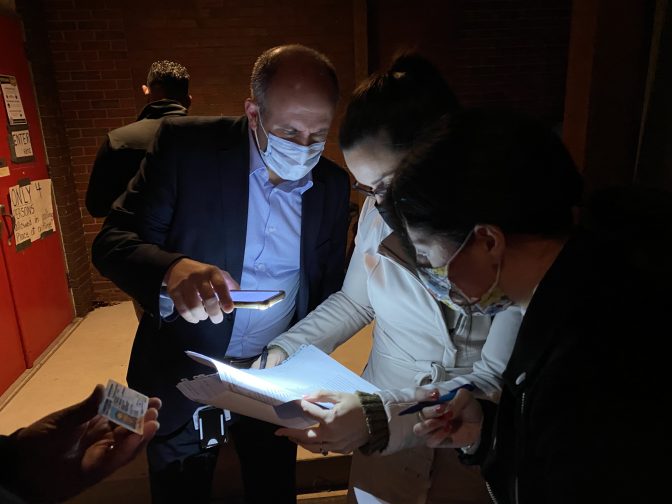 In terms of interpreters, Berks had plenty on hand. The county said it had interpreters at 92 of more than 200 polling locations. Election services had interpreters on call and sent two interpreters to Christ Lutheran Church to help process voters but were ultimately not needed, according to the county.

Mayor Eddie Moran, Centro Hispano president Michael Toledo, and Berks County’s first ever Latino Commissioner Michael Rivera arrived at the polling place in the afternoon to assure voters they and others would do what they could to rectify the situation.

Immigrant rights group Make The Road Pennsylvania fed people in line and also provided live music. Volunteers passed out rice, beans, tacos, candy and also played Latino music via a loudspeaker. City Councilwoman Donna Reed stayed at the polling place in her district to support voters. They also gave hearty rounds of applause to voters as they left the polling place — in an attempt to encourage voters to stay in line.

Neighbors also leaped into action after hearing of troubles at the polling place. Celines Valerio, of Mount Penn, went to the location, after learning via social media of the troubles voters were experiencing.

Together, Valerio and Rivera clearly wrote names of voters in line and also noted what page in the voter registry they are on so that poll workers could easily locate them once inside.

Issues in Reading appear to have been isolated in the 19-02 precinct, but this was not the first red flag for voter advocates.

Berks also faced criticism from community members in the lead-up to the election for allegedly not having bilingual signage clearly posted at its two ballot drop off locations. The county did have bilingual signage at the locations, Weaver said.

The county also declined to take an offer from voter advocacy group Pennsylvania Voice to send out voter information texts in English and Spanish Berks’ behalf. The county declined the offer because it did not want a third party to send out unsolicited texts on its behalf, Weaver said.

Ceiba nearly filed a federal lawsuit against the county for not having online mail-in ballot applications available in Spanish for the primary.

Make The Road’s Civic Engagement Director Ivan Garcia said what happened at Christ Lutheran Church is a great example why organization is needed in communities like Reading.

“There should be no reason why your judge of elections or anyone working on a poll site should be given the reason that the reason why there’s a line is because of the Spanish people and their last name,” Garcia said. “And to me, it just tells me that our work isn’t done.”

Sonja Diaz is a practicing civil rights attorney and the founding director of UCLA Latino Policy & Politics Initiative. The initiative is studying the impact of Latino voters across the county, especially in swing states and counties.

Diaz said even if it was an accident, the problems faced at precinct 19-02 speak to larger problems.

“It’s true that some people who are not white Protestant Anglo Saxon have names that make it difficult for people who don’t have the cultural or linguistic competency necessary to identify that they are in fact who they say they are,” Diaz said. “Ultimately, this is not an issue of voter fraud, but this is just an issue of willful neglect of non white voters and the ways in which they present themselves to participate in an election and really be able to exert their fundamental right to cast a ballot.”

This story was updated to clarify the county’s use of bilingual signage at its two drop off locations.