The restraint bill incorporates into law bans on certain restraints that were already in or were recently added to the police department's conduct rules.

(Philadelphia) — The Philadelphia City Council formally banned police from using certain modes of restraint on crime suspects Thursday, including kneeling on a suspect’s neck, and voted to open contract negotiations with the police union to the public.

The contract bill passed by the council requires a public hearing to be held 30 days before a contract proposal is officially presented to the police union. It allows for public comment on the initial proposal before it is submitted.

The restraint bill incorporates into law bans on certain restraints that were already in or were recently added to the police department’s conduct rules, but it also applies to other law enforcement agencies that operate in the city.

Under the first bill, the public won’t get a chance to comment on the final contract proposals, but the bill stipulates that the city report back to the council on how public comment was incorporated. Negotiations are ultimately decided by a mediator.

City officials, including Police Commissioner Danielle Outlaw and Mayor Jim Kenney, released a list of a few dozen changes to officer conduct codes, policing procedure and disciplinary transparency that they had hoped to work on, some with help needed from the council and others requiring the Legislature’s approval. 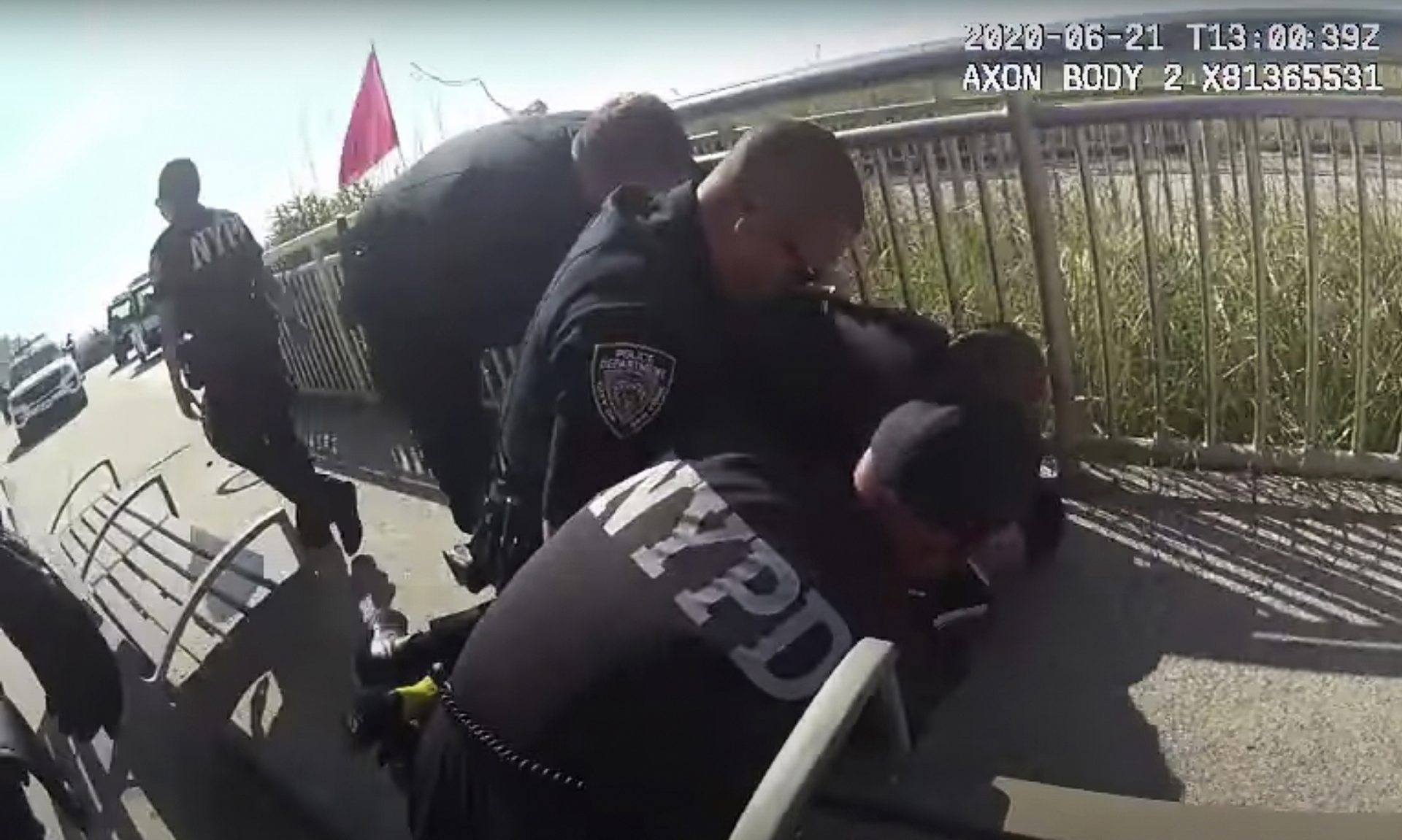 In this June 21, 2020, file image made from police body cam video, New York Police officers arrest a man on a boardwalk in New York. The man whose takedown by police, as shown in this photo, led to an officer being charged for using what officials said was an illegal chokehold.

Officials cited the union contract and negotiations, which have been a traditionally closed process, as a hurdle in some cases to making those changes, especially in disciplinary matters.

“For far too long, these contracts have been negotiated in the dark, allowing the (Fraternal Order of Police) to create terms and demand payments regardless of results or accountability,” Councilmember Katherine Gilmore Richardson wrote in an emailed release about her bill’s passage.

John McNesby, president of the Fraternal Order of Police Lodge 5, said he believes the bill won’t change the contract process or affect officers on the ground.

“The bill has zero effect on us. We are the only ones mentioned in the bill. … None of the other unions are named. It singles us out,” he said. “But really it only says the city has to address the City Council before giving us a proposal.”

McNesby said the union will then give its proposal to the city, as usual. And it’s likely, as has happened in the past few contracts, that the union will declare an impasse and move to the arbitration process with a mediator, he said. That process is not changed by the bill.

Both the public hearing proposal and the bill to formally ban the use of restraints such as “chokeholds, hogtying, and sitting, kneeling, or standing on the head, face, or neck, as well as sitting, kneeling, or standing on the chest or back” were introduced in June amid protests against police brutality in Philadelphia and around the country in reaction to the police killing of George Floyd in Minneapolis.

Outlaw announced in June that she would change the police code of conduct, which already barred chokeholds, to include a ban on kneeling or sitting on a suspect’s upper torso or neck because of the medical dangers.

The council measure formally bans those restraints in city law, as well.