A voter, right, checks in with an election worker before casting her ballot in the Pennsylvania primary in Philadelphia, Tuesday, June 2, 2020.

Constraints gone, GOP ramps up effort to monitor voting in Pennsylvania and other states

(Washington) — Since 1937, the state of Pennsylvania has had strict rules about who can stand in polling stations and challenge the eligibility of voters. The restrictions are meant to curb the use of “poll monitors” long sent by both parties to look out for voting mishaps, but at times used to intimidate voters.

In June, the Republican National Committee sued to ease those rules, saying they imposed arbitrary limits on the party’s ability to keep tabs on the voting process no matter where it occurs.

The Pennsylvania lawsuit over an obscure slice of election law is just one piece of the party’s sweeping plan to expand poll monitoring this election year. Thanks to a federal court ruling that freed the party from restrictions — a result of tactics found to be aimed at minority voters — the GOP is mounting a broad effort to keep a close watch on who casts ballots.

The GOP is recruiting 50,000 monitors, typically party activists and specially appointed volunteers, across 15 battleground states. Meanwhile, the party has filed, or intervened in, lawsuits challenging election rules across the country, including cases in battleground states like Nevada, Wisconsin and Florida that challenge laws meant to ease access to absentee ballots and voting by mail.

Republicans say they are focused on preventing the fraud they have long maintained, without evidence, is rampant in U.S. elections. Democrats and voting rights groups fear the planned influx of poll watchers under the imprimatur of the RNC is a veiled effort to suppress Democratic turnout, particularly in minority communities. 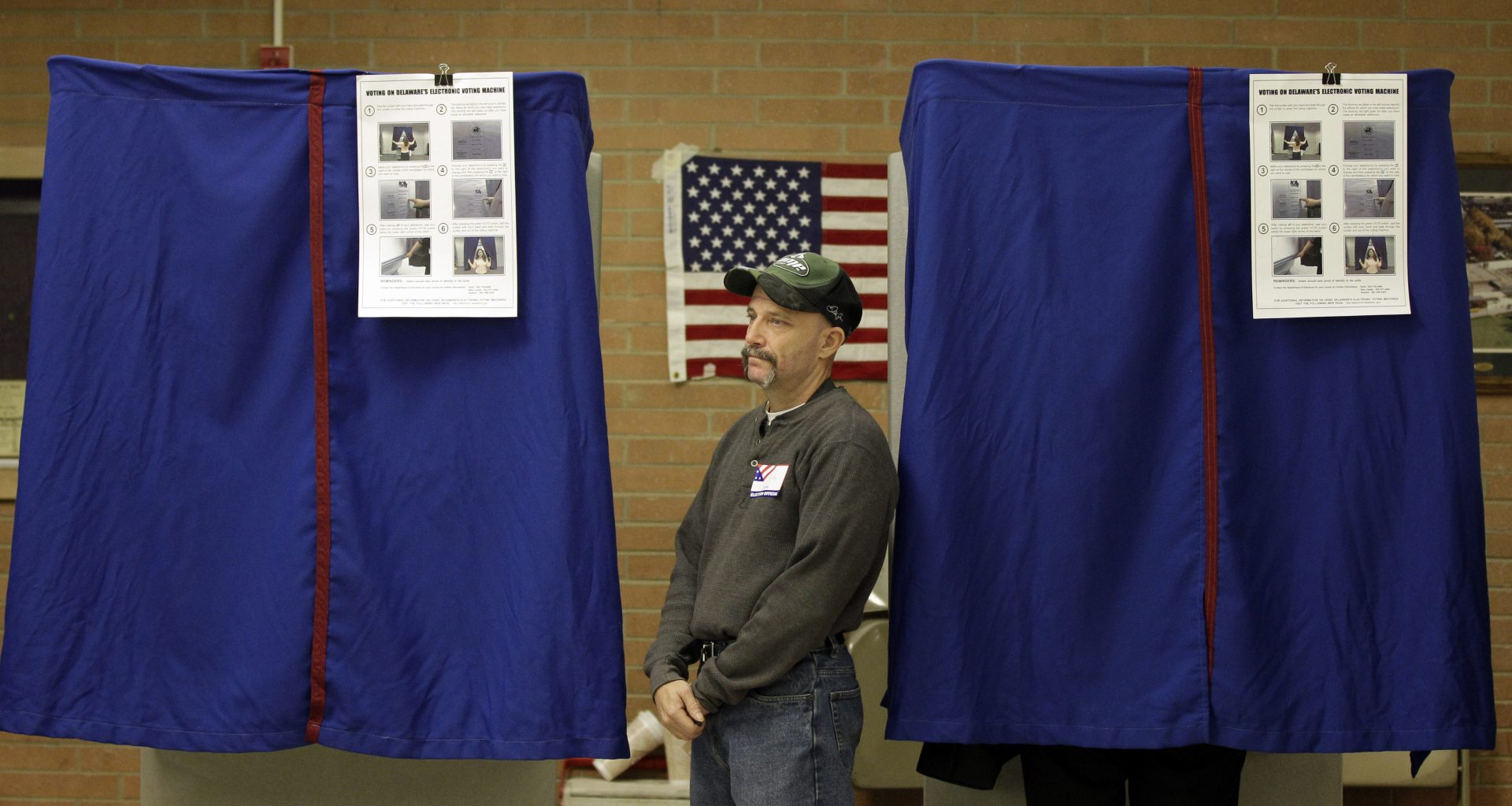 An election worker monitors a voting booth at a polling station in Wilmington, Del. Tuesday, Nov. 2, 2010.

The issue is especially contentious for two parties already clashing over how to protect the right to vote during a pandemic. As election officials prepare for an unprecedented surge of mailed ballots, both parties are gearing up for the possibility of protracted legal battles over how those votes are tallied, giving new weight to the question of who can monitor the count.

“By and large, these kinds of ballot security operations, especially in a heated partisan and polarizing environment and with the emotions surrounding elections — they risk crossing lines, causing disruptions,” said Wendy Weiser, who directs the Democracy Program at the Brennan Center for Justice.

Republicans say the monitors they’re recruiting will receive training to ensure they follow state laws. The real reason Democrats are objecting is because Republicans know that “the playing field has been leveled,” said RNC spokesperson Mandi Merritt.

“We can do what Democrats and other Republican groups have been able to do for decades,” Merritt said in a statement. “This is about getting more people to vote, certainly not less.”

Democrats say they, too, have spent millions of dollars building up staff. They say their goal is to support voters who need questions answered and to combat what they say is a misinformation campaign aimed at suppressing turnout.

Former Vice President Joe Biden told those attending a July fundraiser that his campaign has 600 attorneys and 10,000 volunteers ready to ensure voters can cast ballots.

Traditionally, poll watchers monitor polling locations and can alert campaigns and party lawyers about perceived irregularities, including people being unfairly blocked from voting, identification laws not being followed or poor signage. In some states, citizen observers can lodge challenges against individual voters, kicking ballots to a review board or forcing them to be counted provisionally until the complaint is settled.

In 2020, when as many as half of ballots may be cast by mail, poll watching may extend to mail balloting, where boards that include observers from both parties often review individual ballots to determine whether they should be counted.

The Pennsylvania lawsuit seeks to overturn state law that says poll watchers may serve only in the counties where they live. Republicans are asking a judge to allow monitors to be present any place votes are cast, including any locations where absentee or mail ballots are returned. 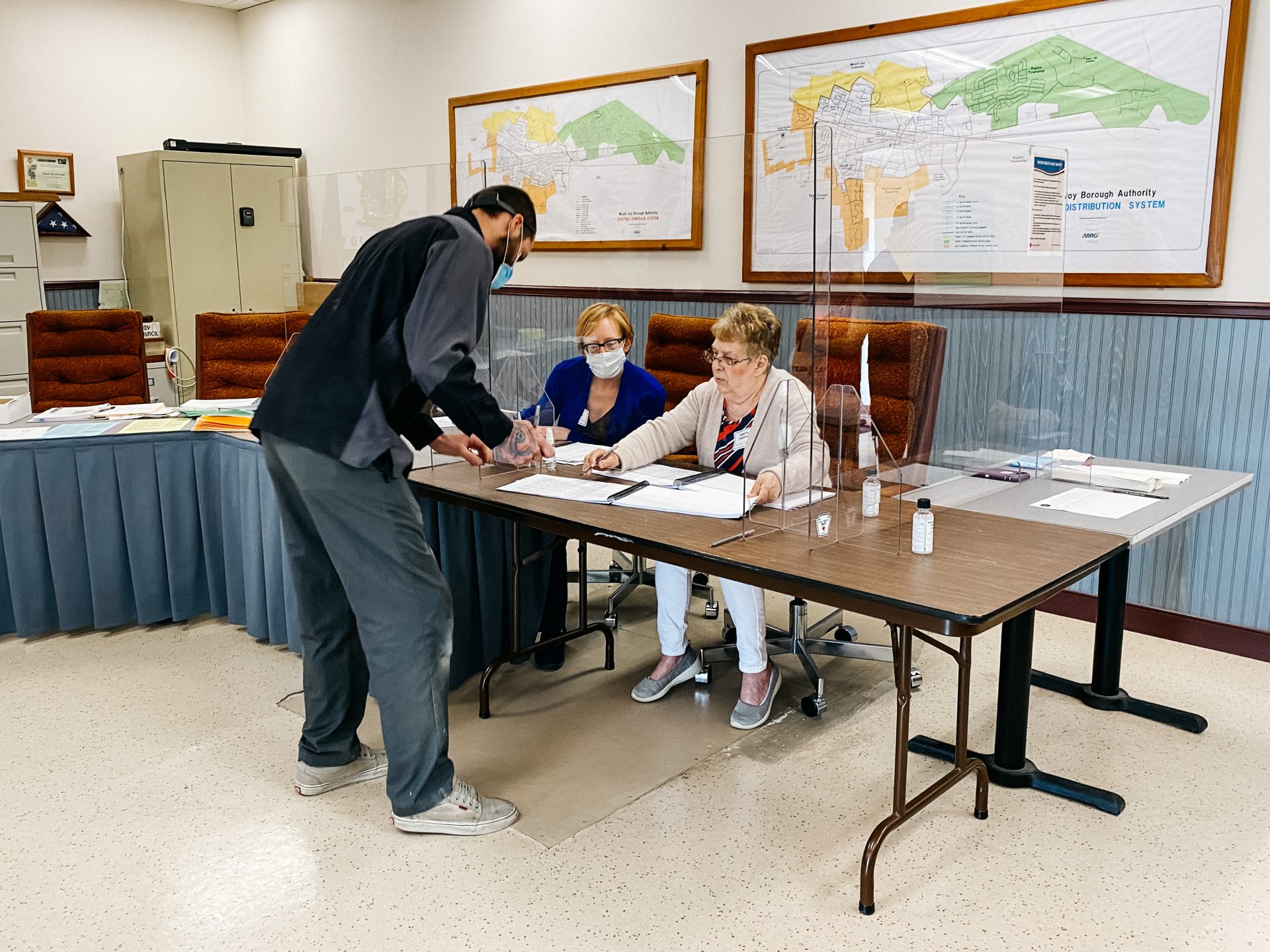 Workers at the Mount Joy Borough Municipal Office greet a voter on June 2, 2020.

Even before the coronavirus reconfigured the election, both parties were bracing for a titanic battle over voting in courts and at the polls.

Intensifying the conflict was a judge’s 2018 decision to lift a consent decree, in place for nearly 40 years, that required the RNC to have court approval for organized poll monitoring activities, such as interrogating prospective voters about their qualifications before they cast ballots or deputizing civilians as law enforcement officials.

“There is no modern precedent for what to expect,” said Marc Elias, who represents Democrats in voting rights lawsuits across the country.

The 1982 agreement resolved a lawsuit that accused the RNC and the New Jersey Republican State Committee of voter intimidation tactics in that state’s gubernatorial election one year earlier. Those included the hiring of off-duty law enforcement officers to patrol polling places in minority communities.

Newly freed from the decree, the RNC can now centralize what individual parties and campaigns and the states had to perform.

“For 40 years, the Republican Party has been fighting this battle with one hand tied behind its back,” Justin Clark, now a senior counsel to Trump’s campaign, told a conservative conference in March.

Democrats are concerned an organized poll-watching force could engage in the type of activity that produced the consent decree in the first place. The agreement was modified several times after Democrats raised new allegations that it had been violated, including in 1990 after the North Carolina State Republican Party sent postcards to Black voters warning them that submitting false information to a federal election official was a crime.

Republicans have given some clues as to how their poll watchers might be deployed.

The monitors will ideally both watch the setup of election systems, where Clark said the bulk of errors occur, and eyeball Election Day activity for possible fraud. Rather than solely focusing in Democratic bastions, they’ll also spread out to smaller cities, such as Eau Claire, Wisconsin, where Trump will try to run up robust margins.

“What we’re going to be able to do if we can recruit the bodies is focus on these places because that’s where our voters are,” Clark told a Republican lawyers group in Wisconsin in November, according to a recording posted online by the Democratic group American Bridge. “Traditionally it’s always been Republicans suppressing votes in places, but let’s start protecting our voters. We know where they are now.”

“Just having a presence of some sort is a deterrent for probably 80% of the bad behavior that is going to happen,” Helton said. “If people are left unattended and unchaperoned in some of these areas where there is no Republican presence whatsoever, then they’re going to cheat.”

Democrats, for their part, have hired voter protection staffers in 19 states, created an online tool to warn voters they may be purged from registration systems, and launched toll-free numbers where voters could report problems.

“We have a really robust operation,” said Rachana Desai Martin, Biden’s voter protection director. “We have a ton of interest. My inbox is filled with people who want to help us protect the right to vote.”