Mae Krier is busy sewing face masks in the ‘Rosie the Riveter’ pattern at her home in Levittown, Pa.

‘We did it, and we can do it’: A Bucks County Rosie helps fight a new foe

“This virus is actually like another war, and we’ve gotta pull together if we’re gonna conquer it.”

Mae Krier has helped make a lot of things in her 94 years, beginning when she was a teenager riveting heavy bombers during World War II.

Now, in the middle of a global pandemic, she is cutting, creasing, and stitching hundreds of cloth masks.

“I had made 300 on my own time, but now we’re over a thousand, so I gotta get my friends to help me. I can’t do it all,” Krier said over the phone from her home in Levittown.

Sewing protective masks was a way to keep busy and help friends and neighbors. But the red and white polka dot pattern Krier uses is also symbolic — it’s the same design seen in the bandana the iconic Rosie the Riveter figure first sported on posters in the 1940s.

For years, Krier and her fellow “Rosies” manufactured critical equipment for the American and Allied forces. Her mission is to have that service and dedication formally honored by the U.S. government in the form of a Congressional Gold Medal, considered to be one of, if not the highest civilian awards.

According to the Congressional Research Service, the medals have expressed “public gratitude for distinguished contributions, dramatized the virtues of patriotism, and perpetuated the remembrance of great events.” Just over 300 have ever been awarded in the nation’s history, bestowed on figures such as George Washington, Mother Teresa, and Robert Frost, among others.

“I think they realize American women have earned it,” Krier said.

Given that women’s labor was instrumental in the Allied forces’ victory, she believes there was  insufficient recognition in the postwar years, and she wants to see the sacrifices made by the Rosies be a part of the country’s historical narrative.

“After the war, the men came home to flying flags and parades, and Rosie came home with a pink slip. It really wasn’t fair,” Krier said. “The men will tell you: If it hadn’t been for the women, they couldn’t have won the war.” 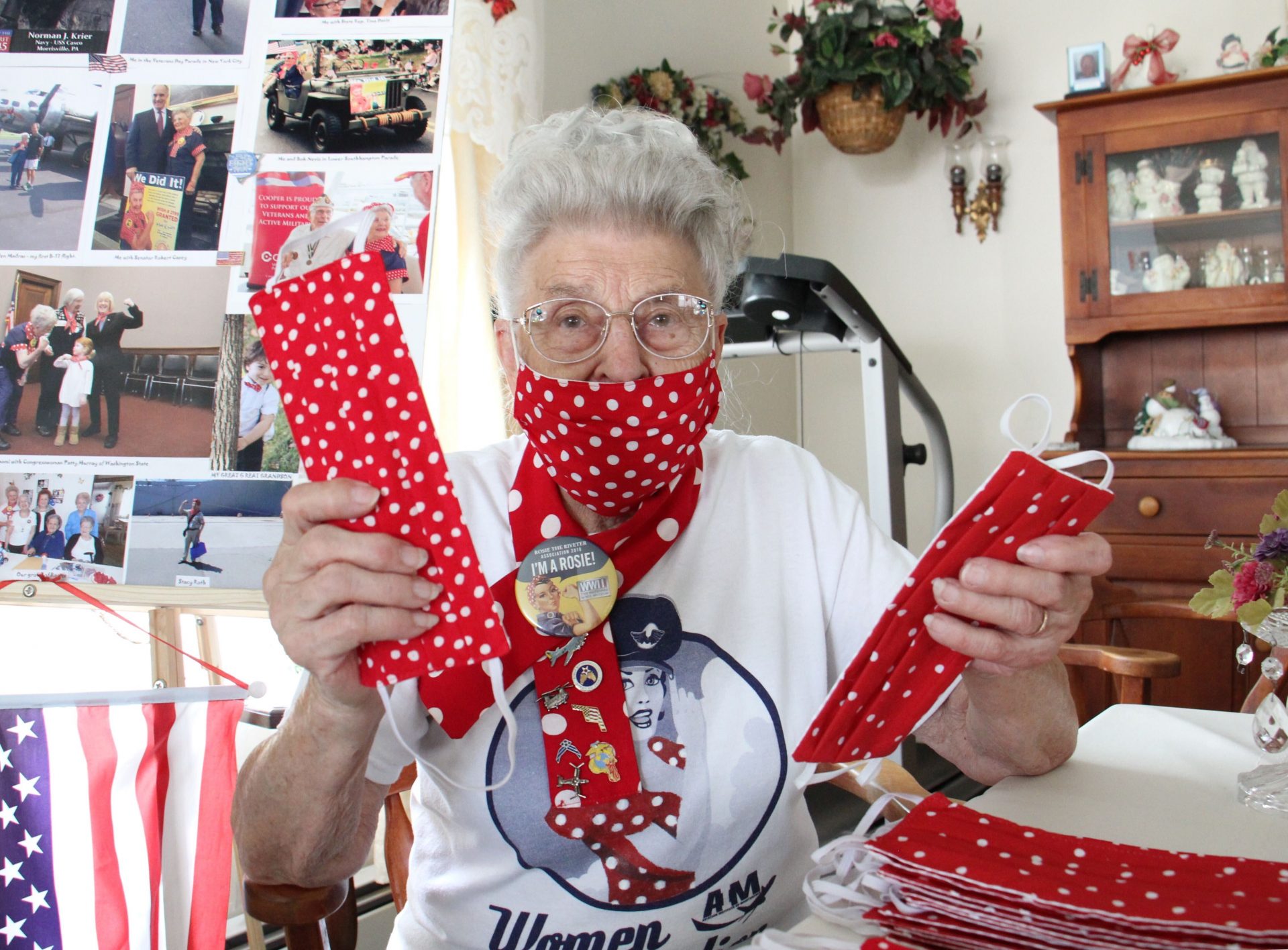 Mae Krier is busy sewing face masks in the ‘Rosie the Riveter’ pattern at her home in Levittown, Pa.

When Krier left her hometown in North Dakota for work in a Seattle factory, she was only 17 years old. She thought she would just work for the summer, but instead stayed until the war’s end, working all day, and dancing half the night. In addition to a sense of collective purpose, it was liberating to earn money and take charge of her life.

“Up until 1941, it was a man’s world. They didn’t realize how capable American women were,” Krier said.

Today, there’s a sense of urgency to her work drumming up support for legislative bills honoring the Rosies.

“This gold medal is important because right now we’re still living history,” Krier said. “In a little while, we’ll just be a page in the history books.”

Lobbying is more effective in person, but …

She and others successfully lobbied members of the U.S. House to support a bill in favor of the Gold Medal. A version there passed in November. The companion bill in the Senate was sponsored by Pennsylvania Democrat Bob Casey, and as of this summer had 29 cosponsors from a bipartisan group of legislators spanning the ideological spectrum. But that’s still short of the 67 votes the measure would need to ultimately pass the chamber.

Success, Krier said, came when she could speak directly with senators or their staffers to make her case. But since March, that hasn’t been an option.

“It seems like if we can meet them in person, we can get them to sign, but now with this virus, we can’t go. So I’m not sure what else to do,” she said.

So in the meantime, she sews. Promoting the Rosie masks has become its own sort of lobbying campaign on behalf of the Senate bill, and since the story of Krier’s mask-making first leapt from social media into the pages of the Bucks County Courier Times, she has done interviews with regional and national outlets to promote the cause.

Krier sees parallels between the last world war and the current global coronavirus pandemic. After the Japanese attack on Pearl Harbor, she said, there was a sense of common cause, manifested in everything from enlistments to grueling industrial work to household conservation of food scraps and knickknacks.

“This virus is actually like another war, and we’ve gotta pull together if we’re gonna conquer it,” she said.

Mask-wearing, Krier added, seems like a worthy and minor inconvenience to protect the public’s health. Much less cumbersome, she believes, than the welding masks and riveting guns she and her colleagues lugged around during their shifts.

Krier looks forward to the day when she can hug the grocery store clerks, mail carriers and other essential service providers who have put themselves in harm’s way during the last four months. She believes they and especially nurses, doctors and frontline health care workers have picked up the mantle of shared sacrifice.

“I call them our new, modern Rosie the Riveters, because they’re doing what we did,” she said. “They work day and night to save people.”

Although she does not believe the pandemic will soon subside, she is optimistic the country will get through it.

She has no plans to stop sewing masks.

From sanctuary to the Ivy League: A DACA recipient’s journey to Columbia University