In this photo provided by the U.S. Army, paratroopers assigned to Fort Bragg, N.C.'s 82nd Airborne Division return at Pope Army Airfield, Friday, May 1, 2020. Over the next three weeks, 2,500 soldiers who were suddenly deployed to the Middle East in January will be required to quarantine upon return.

As U.S. soldiers deploy amid pandemic, they fight 2 battles

Amid the COVID-19 outbreak, the Department of Defense has been forced to adapt quickly to comply with guidelines from the U.S. Centers for Disease Control,

(Fort Bragg, N.C.) — Edward Brown has always found a way to deal with his husband’s military deployments in the past, but the most recent one felt different. Instead of an endless parade of family visits and last-minute errands, Brown and Staff Sgt. James Clyde were holed up inside their Fayetteville, North Carolina, apartment watching Netflix and making TikTok videos.

When his mandatory two-week quarantine ended last Friday, Clyde made the short drive to Fort Bragg and boarded a plane for a nine-month deployment in the Middle East.

The 34-year-old is among 2,200 paratroopers assigned to the 82nd Airborne Division’s 2nd Brigade Combat Team deploying to Iraq and Syria amid the coronavirus pandemic. They’ll be supporting Operation Inherent Resolve, the U.S military battle to defeat the Islamic State.

In 2016, Brown learned ways to keep his worries at bay during his husband’s first stint in Iraq. The then-newlywed ignored headlines and prayed without ceasing for Clyde’s protection. But the virus has added yet another worry that is hard to ignore.

“He’s going to be fighting two wars at the same time,” Brown said.

Because of travel restrictions, Spc. Amy Cloud can’t say goodbye to her family in Pennsylvania before her predeployment lockdown on Bragg. But the unexpected is what she signed up for.

“I volunteered for this. We don’t have a draft. No one forced me to enlist in the military. I did it of my own choice,” she said.

Amid the COVID-19 outbreak, the Department of Defense has been forced to adapt quickly to comply with guidelines from the U.S. Centers for Disease Control, while maintaining military personnel in a constant state of readiness.

Married soldiers, like Clyde, are allowed to quarantine off base inside private homes and apartments. But those who are single spend their last two weeks in the U.S. at FOB (Forward Operating Base) Patriot, a secluded compound on Fort Bragg. 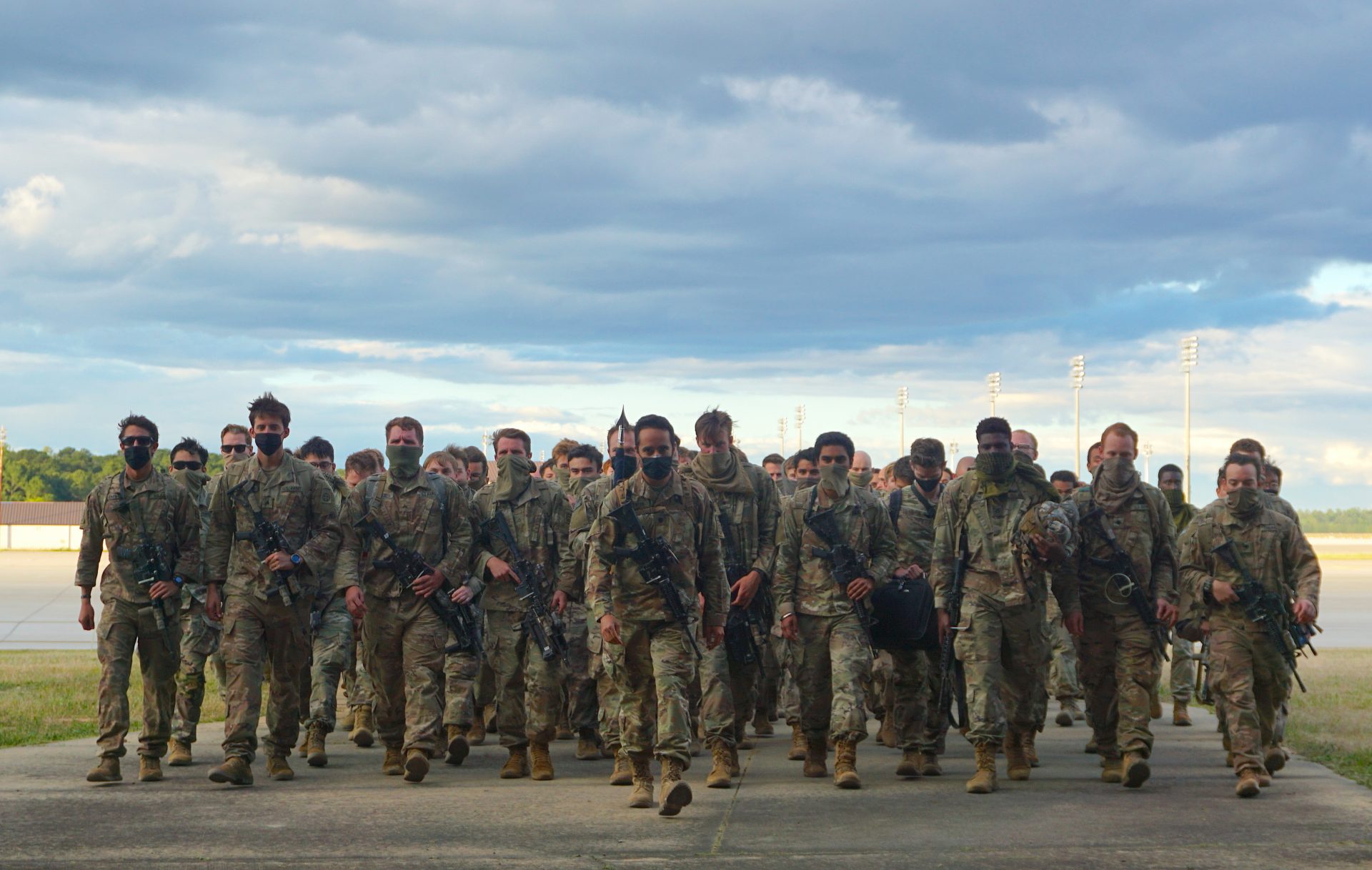 In this photo provided by the U.S. Army, members of Fort Bragg’s 82nd Airborne Division’s Immediate Response Force return Friday, May 1, 2020, at Pope Army Airfield, in North Carolina. The paratroopers suddenly deployed in January amid rising tensions with Iran.

When paratroopers touch down in the Middle East, they’ll immediately be screened for COVID-19. Any soldier who exhibits symptoms will be quarantined again for two weeks in Kuwait.

On bases across Iraq, Syria and Kuwait, physical distancing guidelines were implemented months ago. Dining facilities remain empty as soldiers are required to take meals to go. Workouts are done outside and barbershop appointments are meticulously tracked in case someone gets sick.

Readiness to deploy at a moment’s notice has always been a way of life for paratroopers in the 82nd Airborne Division. The division’s Immediate Response Force is a rotating brigade-sized entity that can mobilize for a crisis within hours. Even so, they have already been extraordinarily busy this year.

On New Years Eve, President Donald Trump mobilized the force to the Middle East. On June 1, not long after some had just returned from that deployment, they found themselves bound for Washington, D.C., to quell civil unrest in Washington, D.C., in response to George Floyd ‘s death. Floyd was the black man who died last month after a Minneapolis police officer kneeled on his neck for several minutes.

The 1st Brigade soldiers who were mobilized had just two hours to report to Fort Bragg. They were in Washington by that evening.

Airborne training throughout the Army, suspended since March because of the coronavirus, resumed last month. Soldiers wore protective face masks as they strapped on nearly 100 pounds (45 kilograms) of parachutes and gear, but were allowed to remove their facial coverings before jumping out of an airplane high above Fort Bragg.

Among those in training on a recent day in May was Sgt. Isaiah Solis. Solis waited on a dusty bleacher to climb into a sand-colored mechanical box resembling a Humvee. The press of a button moved the vehicle back and forth until it was upside down, as soldiers chanted “Rollover! Rollover! Rollover!” while suspended by their seatbelts. The exercise is meant to simulate what can happen if an armored vehicle takes a hit from an improvised explosive device.

This will be Solis’ second deployment. He doesn’t think much about the risk — but his mom does.

He admits the restrictions imposed by the coronavirus pandemic haven’t been comfortable – but he says nothing about the Army is. He’s ready to deploy, even if it looks a bit different this time around.

“Mission is the same: Go fight bad guys,” he said.