A file photo from March 2020 of Gov. Tom Wolf signing the coronavirus disaster declaration for the state. 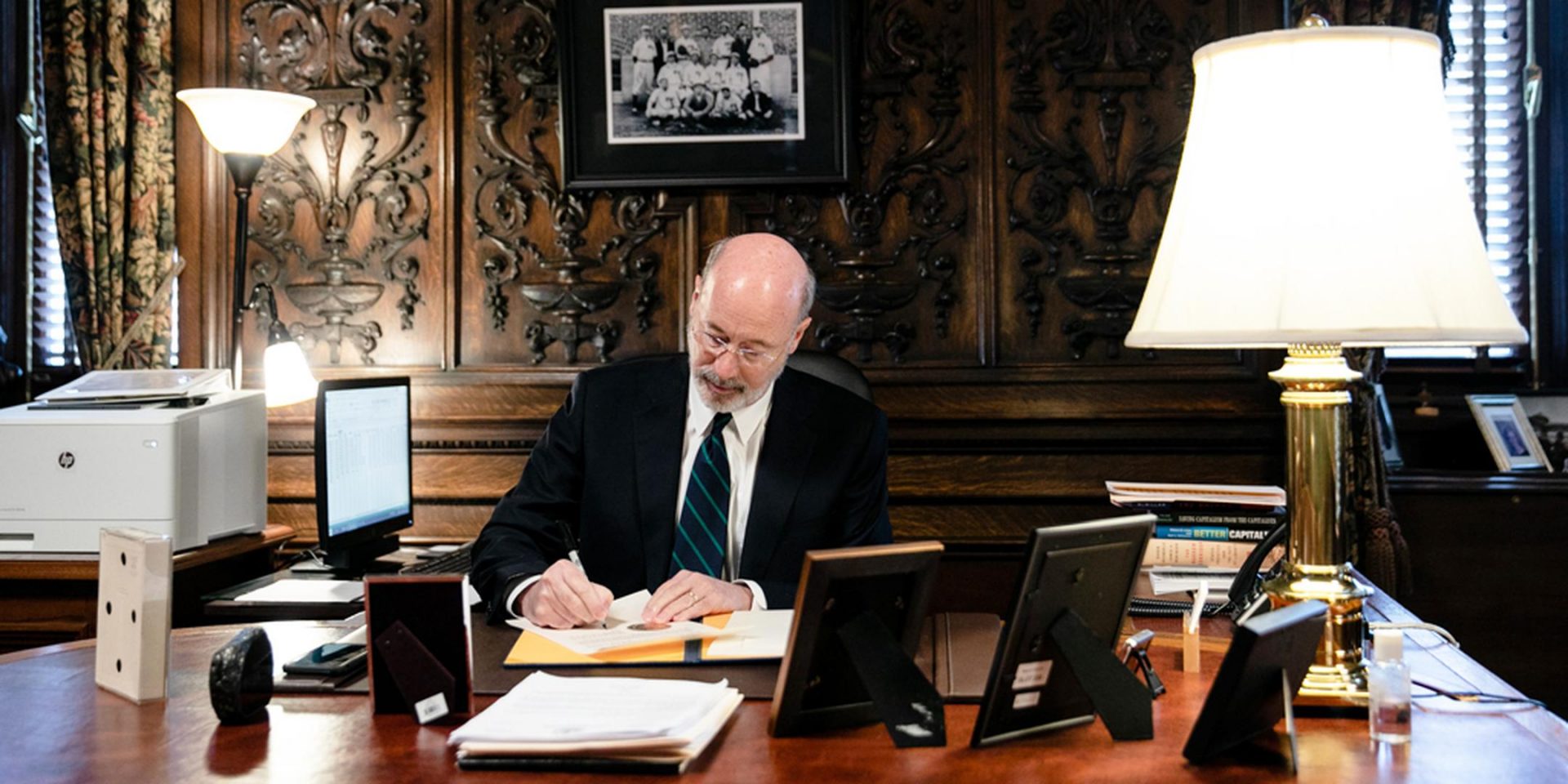 A file photo from March 2020 of Gov. Tom Wolf signing the coronavirus disaster declaration for the state.

Pennsylvania’s Republican-controlled General Assembly passed a resolution to terminate the emergency Gov. Tom Wolf issued in March and extended earlier in June that has provided the legal basis for much of the Commonwealth’s response to the coronavirus.

After a four-hour debate in which 30 of the 50 senators spoke, the state Senate passed the resolution 31-19 with two Democrats joining Republicans shortly before 8:00 p.m. Almost immediately, the House took up the resolution on concurrence and passed it 121-81.

The action sets up a potential legal battle over next steps. For weeks, legislative Republicans have maintained that because Title 35 of state code says the governor “shall” sign a concurrent resolution that ends the governor’s disaster declaration, he has no choice in the matter such that passage by both chambers effectively ends a declared emergency.

“The governor will be statutorily required to issue an order terminating the declaration in compliance with section 7301 if the House passes the resolution as adopted by the Senate,” tweeted Senate GOP leadership spokesperson Jennifer Kocher. “He has no discretion in this matter.”

Democrats have countered that according to Article III, section 9 of the state constitution, for any concurrent resolution to have the force of law, a signature by the governor or a two-thirds override by both chambers of the legislature is required.

Wolf spokesperson Lyndsay Kensinger said the governor will disapprove (effectively veto) the resolution, but said that, even if it were to take effect, it would not affect the administration’s phased reopening plan.

“That said, this resolution would not affect the Secretary of Health’s order including business closure orders, building safety orders, and business safety orders, and therefore the Administration’s phased reopening plan and associated orders would remain in place even if it passes,” she said.

Senate Minority Leader Jay Costa (D-Allegheny) said that during the Senate debate that that is because of the Secretary of Health’s prerogatives under the Disease Prevention and Control Law of 1955.

House Majority Leader Bryan Cutler (R-Lancaster) agreed that some of the health orders will stand because they were issued under different statutory authority, but he objected to the idea that the governor’s disapproval could be the final word on the issue.

House GOP spokesperson Mike Straub pointed to the text of the bill and said that the Chief Clerk of the House will transmit a copy of the resolution to the Secretary of the Commonwealth as an official action of the General Assembly under Title 35 to terminate a state of emergency.

“This will not go to Wolf. The declaration is over, and it will be published in the Pennsylvania bulletin,” he said.

A source close to the GOP leadership predicted that Wolf will take the legislature to court.

In response, Kensinger said in an email late Tuesday night that nothing the legislature has done can have the force of law without being presented to the governor.

“When the concurrent resolution is presented to him, as the Constitution requires, he will disapprove it,” she said. “Until then, no action will be taken. The disaster proclamation has not been terminated by the House or Senate’s actions. Only the governor can terminate the disaster emergency.”

[Related: Clash between Gov. Wolf and GOP legislature hinges on different understandings of power under the Pa. Constitution]

During the Senate debate Tuesday, Republicans tended to focus their arguments on separation of powers issues and the impact the shutdown has had on Pennsylvanians.

“We are here in response to the voices that put us here,” said state Sen. Scott Martin (R-Lancaster).

“He’s our governor. He’s not our king,” said state Sen. David Argall (R-Berks, Schuylkill). “The General Assembly never ever intended to grant this governor or any governor, the royal powers of the king. This legislation is an attempt to clarify our checks and balances.”

Senate Minority Leader Jay Costa (D-Allegheny) suggested that even if the resolution passes, it would not necessarily stop the business closure orders because the Secretary of Health has authority under the Disease Prevention and Control Act of 1955 to close businesses, he said.

Senate Majority Leader Jake Corman (R-Centre) countered that the Secretary of Health has the powers only over those who are sick.

Democrats tended to focus on the potential loss of federal funding should Pennsylvania become the first state to end its emergency declaration as well as the ongoing risks of COVID-19.

State Sen. Lindsey Williams (D-Allegheny) pointed to Title 42, Section 5191 of the U.S. Code, which states, “As a part of [a request for assistance], and as a prerequisite to emergency assistance under this chapter, the Governor shall take appropriate action under State law and direct execution of the State’s emergency plan.”

Williams dismissed an assurance that Mastriano received from a White House official as insufficient justification to protect the Commonwealth.

“I’m a licensed attorney. I want a legal opinion. I want citations to statutes, regulations, and legal authority to justify that legal opinion,” she said.

State Sen. Maria Collett (D-Bucks, Montgomery) added, “I am not willing to bet my constituents’ livelihoods on the whims of this president.”

But Democrats also questioned the capacity of the legislature to act responsibly in a pandemic.

State Sen. Art Haywood (D-Montgomery, Philadelphia) noted that, on April 15, near the peak of COVID-19 cases in Pennsylvania, the legislature passed legislation to reopen several sectors of the economy.

State Sen. Katie Muth (D-Berks, Chester, Montgomery), responding to Republican arguments that stay-at-home and business closure orders infringed on people’s personal freedom, said, “Your freedom does not give you the right to put someone else at risk.”

Two Democrats did express reservations about the governor’s use of executive power, but neither voted for the resolution.

State Sen. Lisa Boscola (D-Lehigh, Northampton) said she would have been inclined to support the version of HR 836 that passed the House, which terminated the disaster declaration only to the extent that it treats some businesses differently than others, but that the Senate version, as amended Tuesday, went too far because it might jeopardize federal funding.

“As frustrated as I am with the approach that this administration has taken with the Lehigh Valley specifically, I am not going to put federal dollars in jeopardy. I can’t do that. I am going to set aside my personal feelings about how I feel about the administration’s approach to the Lehigh Valley … I’m just going to vote in the financial interests — the best interests — of all Pennsylvanians,” Boscola said.

Corman conceded the governor could issue a new emergency declaration that has narrower constraints and said Republicans would be happy to work with him on that, but he said that he refuses to become “comfortable” with the new normal Gov. Wolf has signaled is forthcoming.

“The governor is a good man. He and the Secretary of Health are doing absolutely everything they can to fight this virus,” said Corman. “It’s not about his interest and desire to keep the people of Pennsylvania healthy. This is a free society, a free society where we fought and died … for a government of the people, by the people, and for the people. If we become complacent and we allow our civil liberties to go away because of fear, they may never come back.”

State Sen. Andy Dinniman (D-Chester) acknowledged Republicans’ concerns about checks of balances, conceding, “Clearly, we do not have a balance of power that is appropriate.”

He suggested that a proposed constitutional amendment that would require legislative assent to a disaster emergency declaration after 30 days is a step he would support, and he also proposed a constitutional convention to address the balance of power between branches. But he said he could not support HR 836 because COVID-19 is still an active pandemic.

The proposed amendment to the state constitution is currently in the Senate as SB 1166 and passed the Senate Appropriations Committee Tuesday for possible consideration Wednesday. Amending Pennsylvania’s constitution requires approval by voters after passing both chambers of the legislature in two consecutive legislative sessions.