Wolf wants to begin easing some pandemic restrictions on May 8 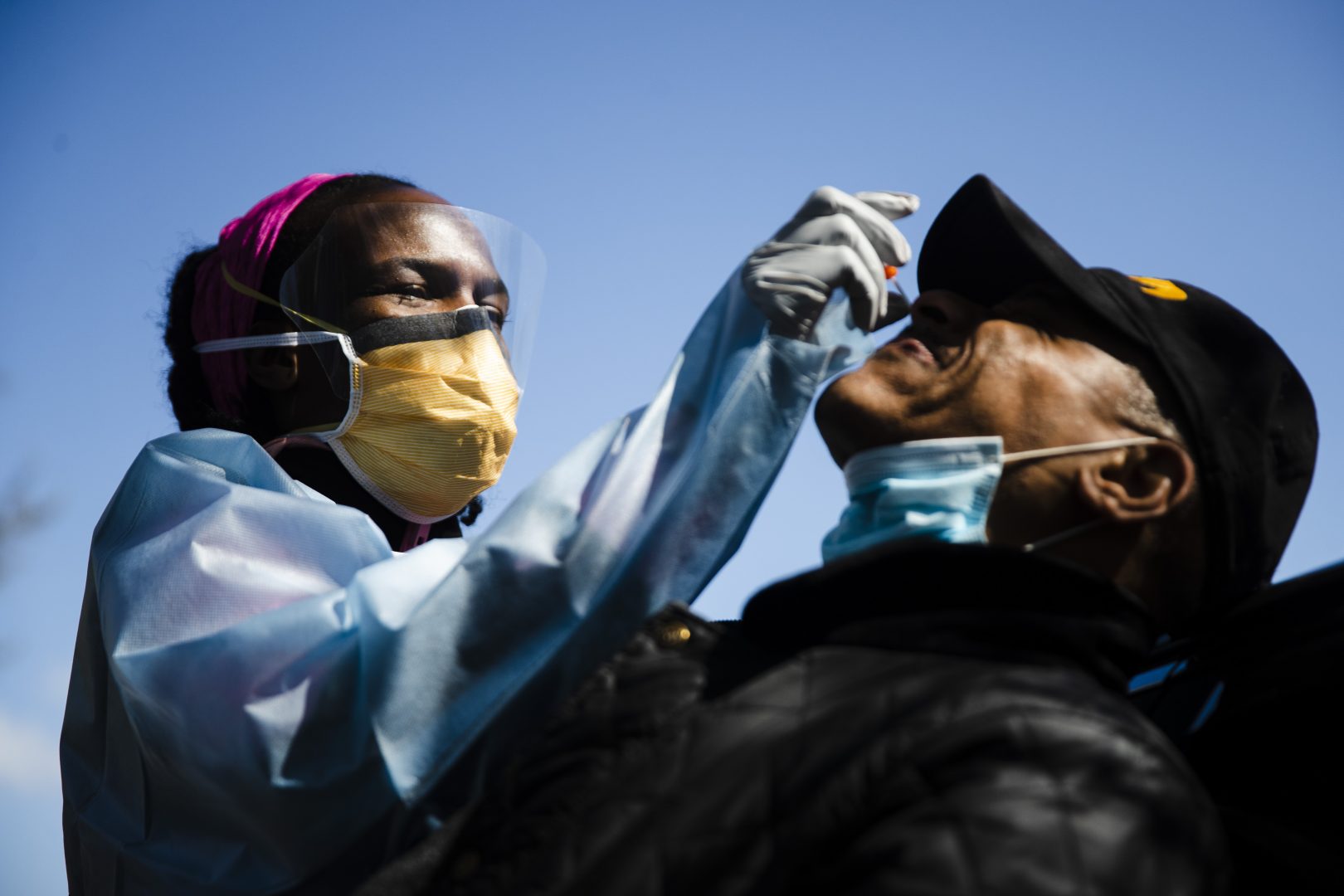 Residents of northcentral and northwestern Pennsylvania are projected to be the first in the state to be released from Gov. Tom Wolf’s stay-at-home order, and many retail stores in those areas should be able to reopen, under a statewide plan announced Wednesday night.

Wolf wants to begin easing some pandemic restrictions on May 8 in areas of Pennsylvania that have been lightly impacted by the new coronavirus. 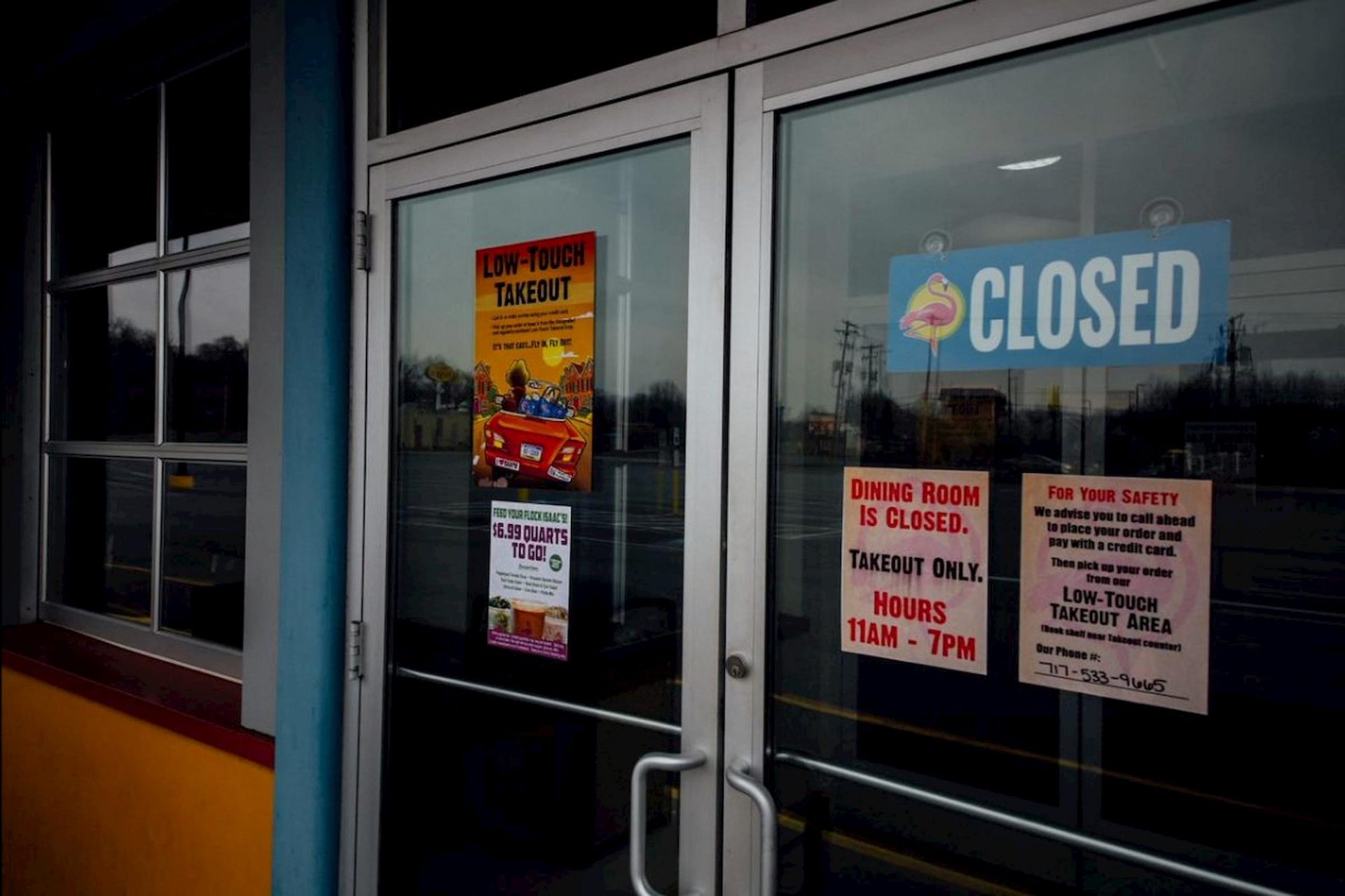 Closed signs are on the front door of Isaac’s Restaurant in Hummelstown on April 5.

His reopening plan said a region or county will need to average fewer than 50 new positive cases of the virus per 100,000 residents for 14 days in order to begin moving out from under his statewide lockdown. Many counties in rural Pennsylvania have reported just a few cases total.

“We’re trying to be prudent and careful and we want to keep people safe,” Wolf said at a video news conference Wednesday night.

The virus has infected more than 35,000 people in Pennsylvania and killed more than 1,600, but Wolf, a Democrat, says the state has made sufficient progress in its fight against COVID-19 to begin a gradual loosening of restrictions. Republicans are pressing for a more aggressive timetable. 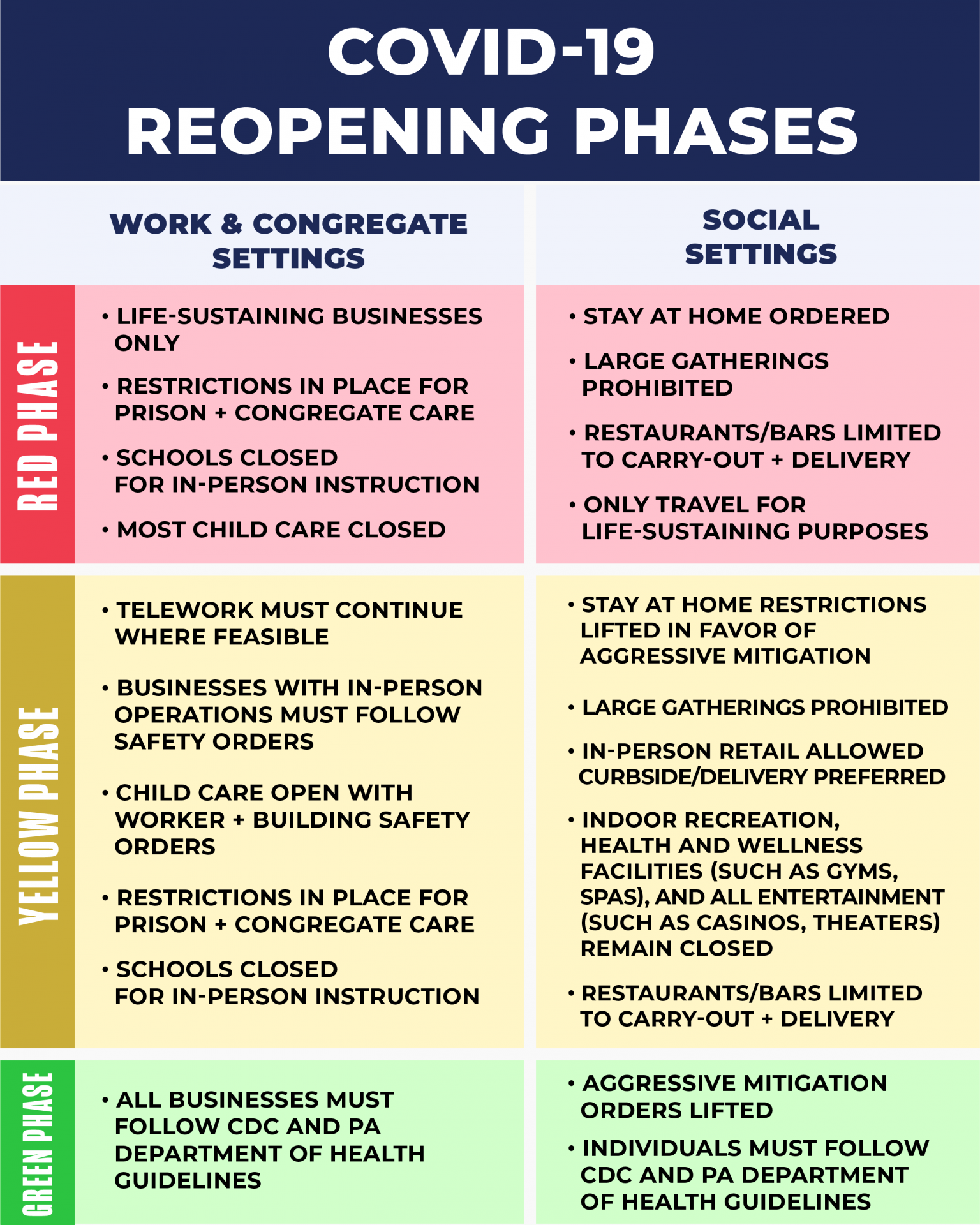 As the virus begins to ebb, and each county or region meets the state’s case reporting threshold, residents will be permitted to leave their homes and in-person retail will be allowed to resume, according to Wolf’s plan. But a ban on large gatherings will remain, and gyms, casinos, theaters and other indoor recreational, wellness and entertainment venues will stay closed, according to the plan, which lays out a phased, color-coded reopening roadmap.

Right now, all of Pennsylvania is at “red,” the plan said, meaning that all 12.8 million residents are under orders to stay home and all nonessential businesses are closed. Regions and counties will move from red to yellow, and then, eventually, to green, meaning that all pandemic restrictions are lifted, the plan said.

Wolf also pushed up the date that limited building construction work may resume statewide, from May 8 to May 1. But he cautioned that if the virus flares up again in a certain county or region, residents would be ordered back home and businesses would have to shut down again.

Schools will remain closed for the rest of the academic year.

Other coronavirus-related developments in Pennsylvania:

Pennsylvania’s COVID-19 death toll rose by 58 to 1,622, the state health department reported Wednesday, with more than 1,150 additional people testing positive for the virus that causes the disease.

Statewide, more than 35,600 people have tested positive, according to the latest health department data. The number of infections is thought to be far higher because many people have not been tested, and studies suggest people can be infected with the virus without feeling sick.

Today’s update includes three new deaths in Berks County, two in Dauphin and one in York. The total death count for the region is only slightly higher than yesterday, however, because the state is reporting decreased counts in two counties: two fewer reported deaths in Lancaster County and one fewer in Columbia County.

On Sunday, the Department of Health began including deaths probably caused by COVID-19 as well as deaths of people confirmed to have the coronavirus. The department has spent the past several days working with coroners and hospitals to revise its data.

Since the first cases were reported in central Pennsylvania on March 13, a total of 6,112 people in the region have tested positive for the virus. The first coronavirus-related deaths in this region were reported about two weeks later, on March 28. Since then, a total 240 central Pennsylvania residents have died from COVID-19 or related complications. 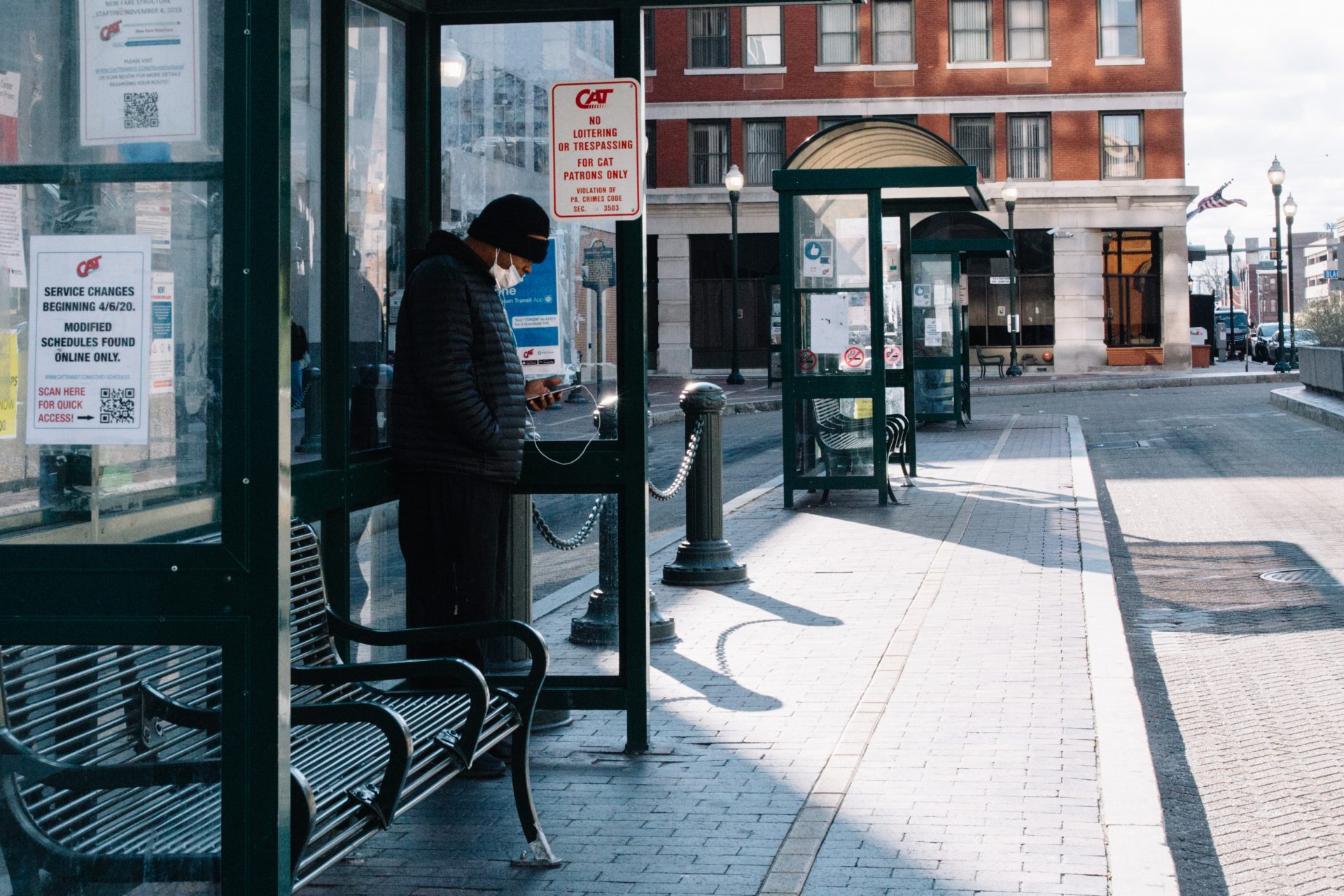 A man wearing a mask over his mouth checks his phone while waiting for a bus in Harrisburg on April 10, 2020.

Capital Area Transit is requiring all passengers to wear a mask or other face covering. To help protect its riders and workers, the transit agency is asking community members for donations of cloth masks. People interested in helping can call CAT’s customer service line at 717-238-8304 or email info@cattransit.com.

The relief fund, an effort of the York County Community Foundation and United Way of York County, will focus its next round of grants on organizations that help families facing eviction.

For more information about the grant program or to contribute to the response fund, visit www.yccf.org

Bingo for small businesses in Lancaster 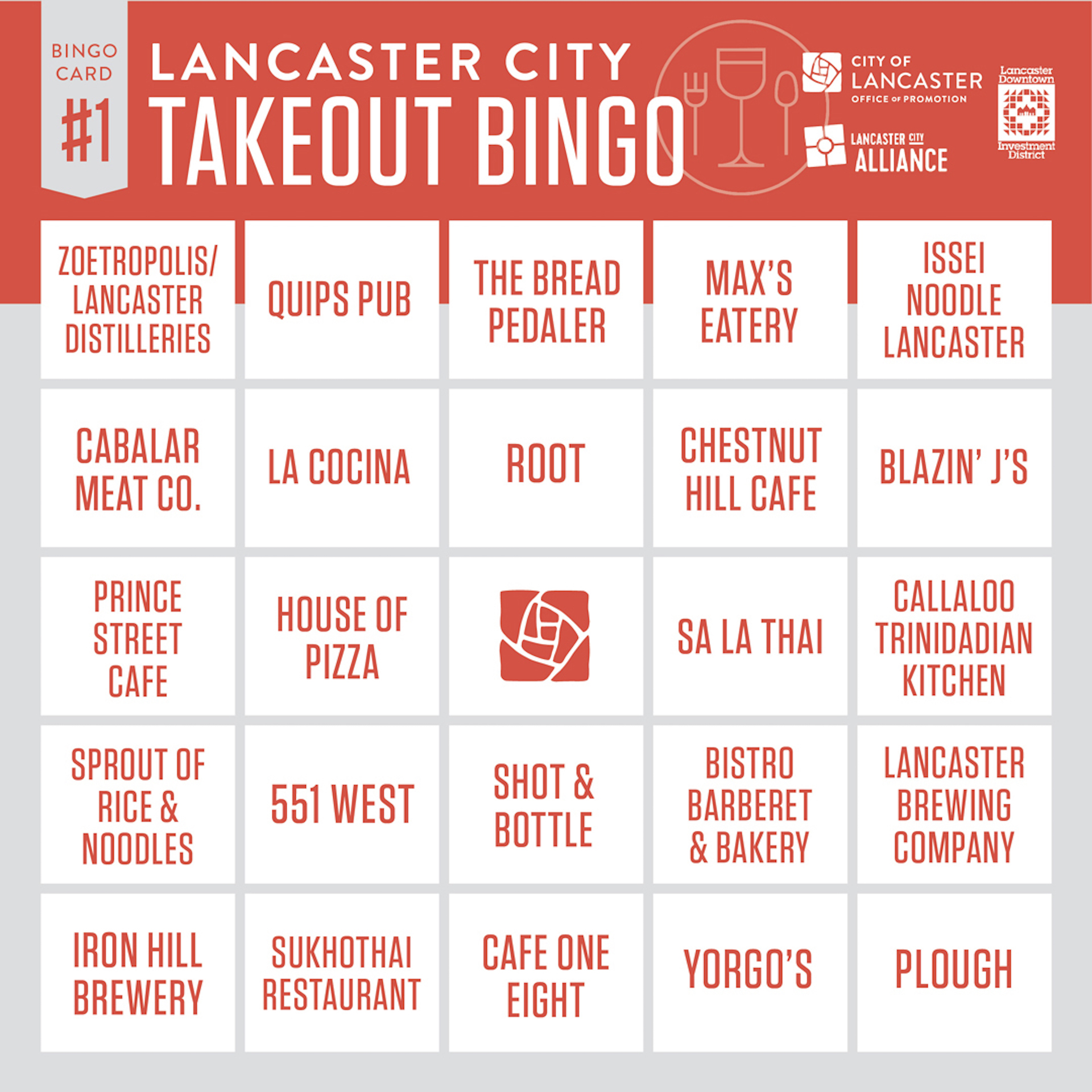 The City of Lancaster Office of Promotion and the Lancaster City Alliance launched a bingo game to help support restaurants and retailers.

To play, participants must order from a listed location and take a picture of the food. Once they have completed a bingo (horizontal, vertical or diagonal), they can send food photos and the marked bingo card to LOOP@cityoflancasterpa.com or direct message @visitlanccity on Instagram in order to be entered into a drawing for $50 Downtown Dollars. One winner will be selected every two weeks.

The city plans to release four bingo cards. The first two will feature restaurants, and the second set will focus on retail stores.

The Wolf administration is encouraging voters to cast their primary election ballots by mail, saying it would help prevent the spread of the new coronavirus, but faced legal action Wednesday by a liberal group demanding greater protections against disenfranchisement. 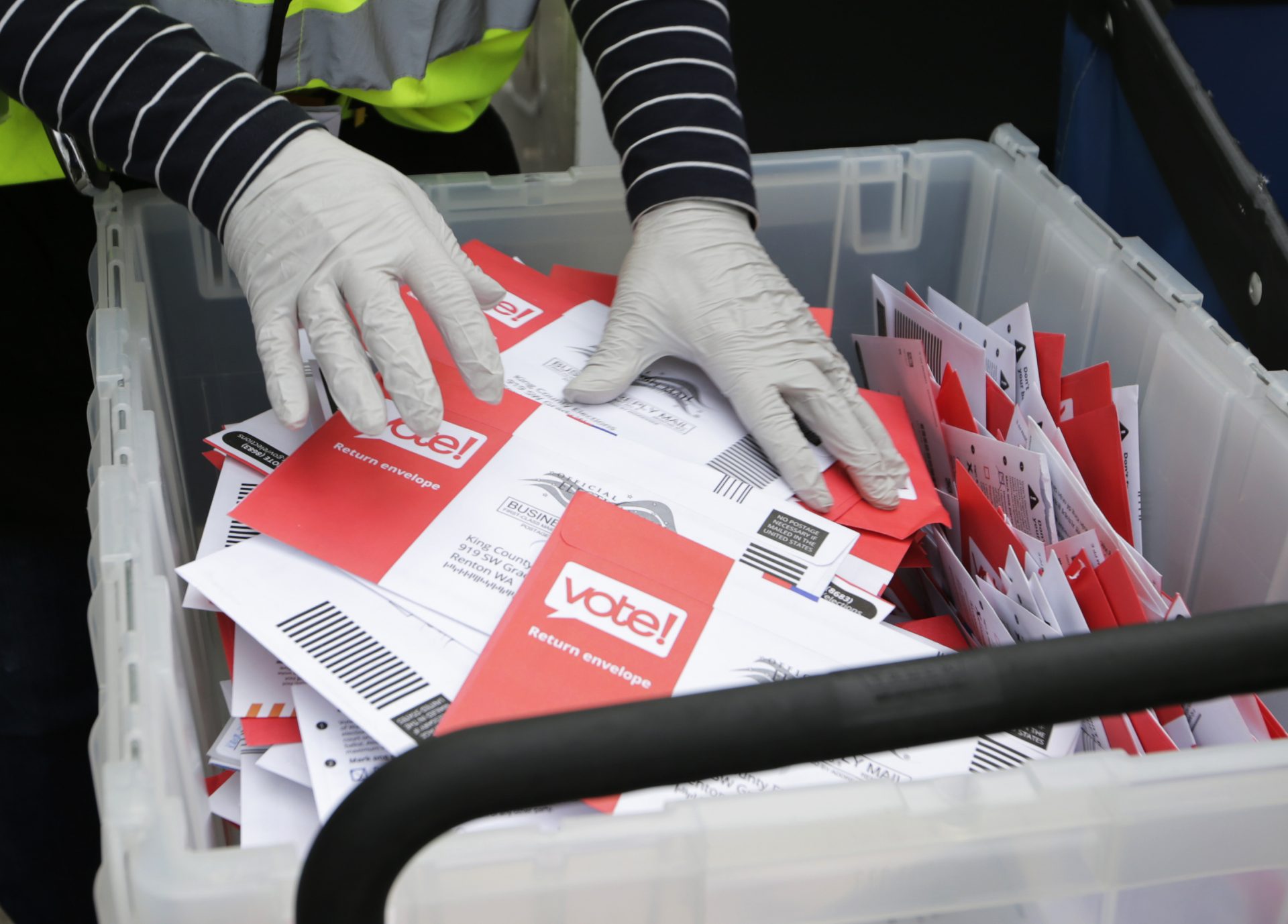 Republican and Democratic party officials in Pennsylvania have encouraged people to vote by mail amid concerns the virus will make it difficult for county officials to find polling places and get poll workers to staff them. Election officials in various counties say they probably will be forced to operate far fewer polling places than normal.

In its lawsuit, the labor-backed Pennsylvania Alliance for Retired Americans seeks to have the state provide prepaid postage for all mail ballots; count ballots received after 8 p.m. on Election Day if the delay was caused by a disruption in mail service; and allow third parties to assist voters in submitting their sealed ballots.

State officials have “failed to implement adequate safeguards to ensure a free and fair election” in the face of the pandemic, said the suit, filed in Commonwealth Court.

An email was sent to Wolf’s spokeswoman seeking comment.

The new coronavirus could cost Pennsylvania hospitals more than $10 billion this year, a trade group said Wednesday, repeating its call for the Wolf administration and state lawmakers to provide tax relief and other financial support.

An analysis commissioned by The Hospital and Healthsystem Association of Pennsylvania said the cancellation of elective surgeries and deferral of medical treatments — from which hospitals derive a large portion of their income — resulted in a nearly $1 billion revenue hit in March alone. Many hospitals and health networks have already furloughed and laid off workers, and the report warned that some hospitals might have to close.

“We are calling on the governor and the legislature to act now,” Andy Carter, the group’s president and CEO, told reporters on Wednesday. “I ask policymakers to use the tools at their disposal to ensure we plant the seeds of a strong recovery for Pennsylvania’s health care workforce and its community of hospitals.”

Pennsylvania hospitals said they expect to get more than $3 billion in federal coronavirus funding, leaving them with a projected net loss from the pandemic of $7 billion this year without tax relief and additional government aid.

The drive-thru testing site is for health care workers and first responders with symptoms of COVID-19, and symptomatic people ages 65 and older. The site is in the parking lot of the Mohegan Sun Arena at Casey Plaza, outside Wilkes-Barre.

Several counties in northeastern Pennsylvania, including Lehigh, Monroe and Luzerne — where the testing site is — have some of highest rates of infection in the state.

Two police unions have sued the Erie County Department of Health to force it to disclose for emergency responders the names, and not just the addresses, of people with a COVID-19 diagnosis under isolation.

The lawsuit, filed Wednesday by unions representing 173 officers in Erie city and about 200 officers in other Erie County police departments, centers on how much information is provided by the health department to the county 911 center.

Dispatchers pass along the information to police and others, at their request, when they are summoned to respond.

The county’s solicitor, Richard Perhacs, said the current practice matches that of other counties in Pennsylvania. County Executive Kathy Dahlkemper told the Erie Times-News that it protects the public while respecting patients’ privacy rights.

Perhacs said about 25 people in Erie County are currently under isolation with a COVID-19 diagnosis.

The lawsuit claims current policy violates the county health agency’s requirement to prevent and control the spread of disease and puts officers at risk of infection.