Protesters head to Harrisburg on Monday to demand lifting of Pa. restrictions

But public health leaders say it's too soon. And who are these protesters anyway? 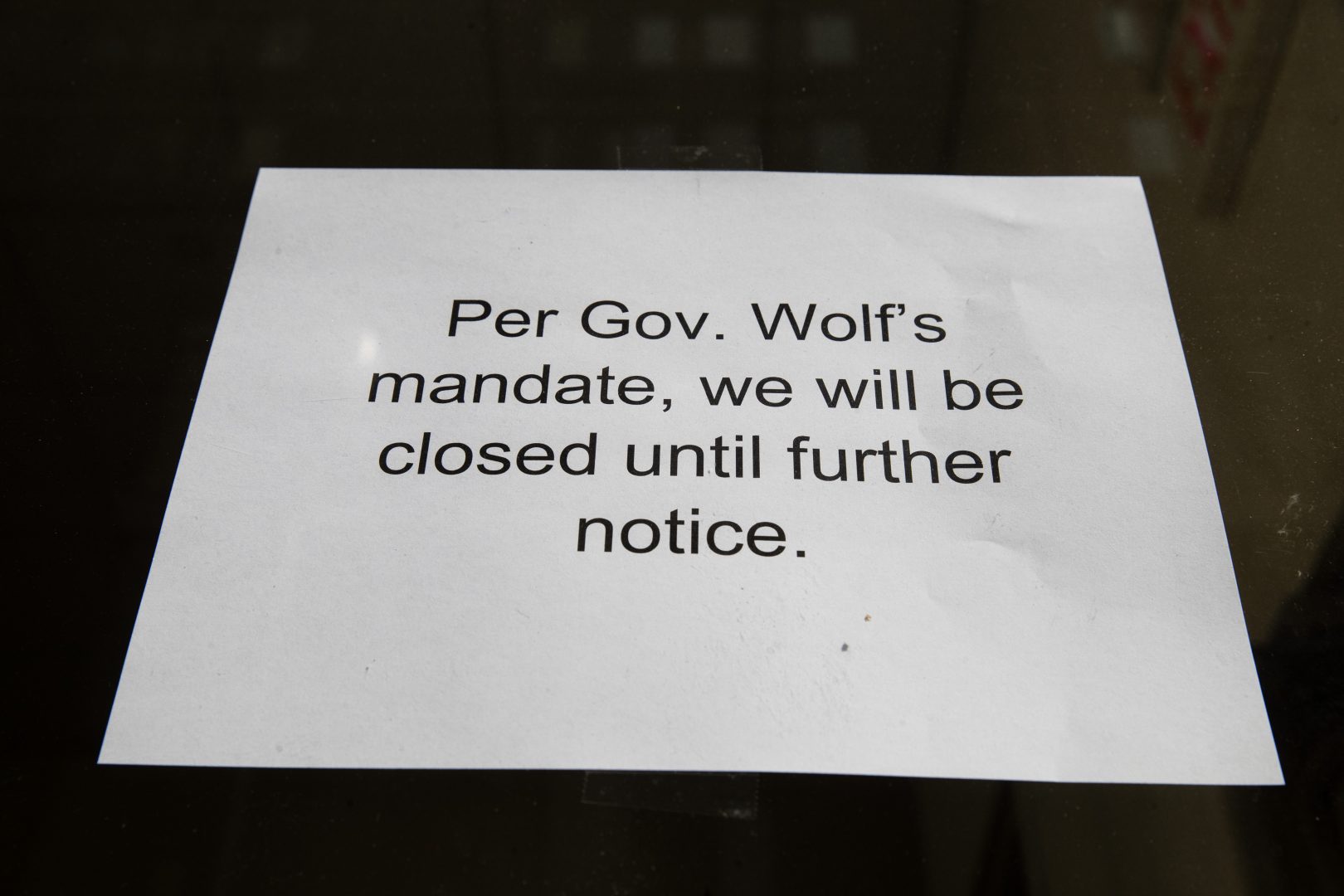 Today at noon, groups advocating an end to coronavirus restrictions are holding a protest outside the state capitol in Harrisburg. The protest follows similar gatherings over the weekend in Indiana and Texas, and last week in Michigan and North Carolina.

Let’s take those one at a time:

It’s not as bad as predicted: Just last month, public health officials and political leaders around the country were offering dire predictions about the number of deaths that would result from coronavirus infections. Hospitals would be overrun, they said, as they urged Americans to self-isolate.

Yes, the fears of March have, thankfully, not played out. And it’s important to note that the predictions came from epidemiological models produced by different academic centers and public health agencies. Like all models, they reflect what their creators know at any given time.

As Dr. Anthony Fauci said more than a week ago, “Models are as good as the assumptions you put into them, and as we get more data, then you put it in and that might change.”

Writing in The Washington Post, epidemiologists William Hanage and Helen Jenkins stress that the models get better as more facts are gathered about the virus’s spread: “Debating the merits of different models rather than taking prompt action to slow the relentless march of the coronavirus is a deadly mistake.”

But did stay-at-home orders and business closures actually do what they were intended to do — i.e. slow the spread of the disease? They did. That’s the consensus of public health officials, including Pennsylvania’s Dr. Rachel Levine.

A counter-example is Singapore. The city-state that early on boasted of conquering the virus is now experiencing a second wave of infections. Officials there used aggressive testing and tracing to detect cases and isolate them. But testing missed some cases, and meanwhile the country’s leaders resisted stay-at-home orders and other restrictions. “As Singapore’s experience shows, relaxing too soon can backfire disastrously,” writes CNN’s James Griffiths.

Wrecking the economy isn’t worth it: This utilitarian argument assumes that the virus doesn’t pose the same level of threat to everyone, and that people who are most at risk can be successfully isolated. At least one economic paper suggests that lifting restrictions too soon will cost the economy more than keeping them in place for another two months.

As Futurity’s Lawrence Goodman writes, the study’s author, Brandeis University’s Anna Scherbina “compared the economic costs of businesses staying closed, which causes a steep drop in the gross domestic product, with the economic benefits of a lockdown that prevents people from getting sick and dying. With widespread illness, productivity drops as people skip work to recover or care for their sick relatives.There are also increased medical costs.”

Scherbina warned that easing coronavirus restrictions could help the virus return in a second wave that would prompt an even stricter shutdown of the economy. That, she estimated, would potentially cut the U.S. GDP by 40 percent. In other words, the costs now are less than they would be if the virus begins to spread in a second wave.

It’s safe for some of us to go back to work: This argument is predicated on the assumption that people carrying the virus can be identified and isolated. It assumes, too, that for most people, the virus isn’t particularly deadly.

But scientists are still trying to understand coronavirus. While South Korea has brought new infections down to a handful per day, doctors there found that some people who had the virus and recovered later tested positive for it again.

Michael Ryan, a top World Health Organization official, stressed how much scientists don’t know: “Nobody is sure whether someone with antibodies is fully protected against having the disease or being exposed again.” He said some people might get a false negative result and believe they’re protected but are not.

Other studies show that many people with the virus are capable of spreading it despite exhibiting no symptoms. And without enough testing, separating silent carriers from the rest of us isn’t possible.

So what does the future hold? Sunday’s New York Times carried a long piece by reporter Donald G. McNeil Jr. that explored what the next year could look like for the United States, based on interviews with 20 experts. A taste:

“When can we emerge from our homes? How long, realistically, before we have a treatment or vaccine? How will we keep the virus at bay? Some felt that American ingenuity, once fully engaged, might well produce advances to ease the burdens. The path forward depends on factors that are certainly difficult but doable, they said: a carefully staggered approach to reopening, widespread testing and surveillance, a treatment that works, adequate resources for health care providers — and eventually an effective vaccine. …

“Still, it was impossible to avoid gloomy forecasts for the next year. Exactly how the pandemic will end depends in part on medical advances still to come. It will also depend on how individual Americans behave in the interim. If we scrupulously protect ourselves and our loved ones, more of us will live. If we underestimate the virus, it will find us.” —Russ Walker

Who are the protesters? Protesters gather outside the Indiana Governor’s mansion in Indianapolis, Saturday, April 18, 2020, urging Gov. Eric Holcomb to back off restrictions on Indiana residents because of the coronavirus, and restart the economy. (AP Photo/Michael Conroy)

That careful approach isn’t enough to satisfy opponents who say Wolf is overreaching his authority by shutting down the economy. But who are the protesters? What do they want?

Slate’s Molly Olmstead, in a piece about the spread of the protests nationally, writes: “The supporters of the protest movement appear to generally fall into two categories: those interested in preserving local businesses and those who complain of an infringement on their personal liberties. Groups geared toward the latter more often veer stridently political, while some of the other groups are trying to take a more collaborative and conciliatory tack.”

The Inquirer notes, “The group Pennsylvanians Against Excessive Quarantine insisted on its website that elected leaders ‘are on a power trip, controlling our lives, destroying our businesses, passing laws behind the cover of darkness, and forcing us to hand over our freedoms and our livelihood!’” And according to The Washington Post, the Facebook groups used to organize the protests in Pennsylvania and other states “appear to be the work of Ben Dorr, the political director of a group called ‘Minnesota Gun Rights,’ and his siblings, Christopher and Aaron. … The Dorr brothers manage a slew of pro-gun groups across a wide range of states, from Iowa to Minnesota to New York, and seek primarily to discredit organizations like the National Rifle Association as being too compromising on gun safety.”

While some protests around the country have been linked to big money conservative donors, others appear genuinely grassroots, like ReOpen Pennsylvania. Its founder, Kirk Durbin of Hollidaysburg, told PennLive he “is not encouraging his followers to join Monday’s protest, but to lobby in other ways for a reasonable reopening of the Keystone State.” Durbin said: “Our goal is to actually be productive,” Durbin said. “This is about Pennsylvania. It’s not about Democrats, Republicans, Independents…This is about Pennsylvania as a whole.”

Durbin’s group stands in contrast to Pennsylvanians Against Excessive Quarantine, which Pennsylvania Capital-Star reporter Sephen Caruso wrote about on Twitter. Another group, ReOpen PA (similar name to Durbin’s group), is co-led by Matthew Bellis of Lancaster County. According to the York Daily Record, Bellis said “he’s frustrated that governors in five other states are building a strategy with Wolf, but he’s excluding his electorate. ‘They’re part of the conversation, but we’re not,’ Bellis said. ‘We don’t want to be in your shoes, but we do want to be a part of the conversation.’”

Regarding Bellis’s point, journalists are also interested in how Gov. Wolf is working with other mid-Atlantic and New England states on a joint reopening strategy. Those talks ought to be open to the public and media, or at the very least described in detail to the voters in the participating states.