Smoke comes from the windows as a firefighter works on Monday, Feb. 24, 2014, in Pittsburgh's Market Square.

March 25, 2020 | 4:25 PM
With our coronavirus coverage, our goal is to equip you with the information you need. Rather than chase every update, we’ll try to keep things in context and focus on helping you make decisions. See all of our stories here.

(Pittsburgh) — Firehouses throughout the city have run out commercial hand sanitizer, but they’ve gotten help from an unusual source: Maggie’s Farm Rum Distillery.

The distillery is one of several in the state that have shifted production to sanitizer. Maggie’s Farm Rum donated 70 gallons of it this week.

Ralph Sicuro, the president of Pittsburgh Firefighters Local No. 1, says he’s glad for the help – but afraid the bureau may need more of it down the road.

“Some stations may still have some left in their dispenser, but most have depleted their hand sanitizer at this point,” said Sicuro. “So they have been using extra [disinfecting] wipes. The wipes, as I understand it, are either extremely low or depleted at our supply warehouse.”

Sicuro also worries about items like N-95 face masks, which are in demand by hospitals and other first responders around the country. 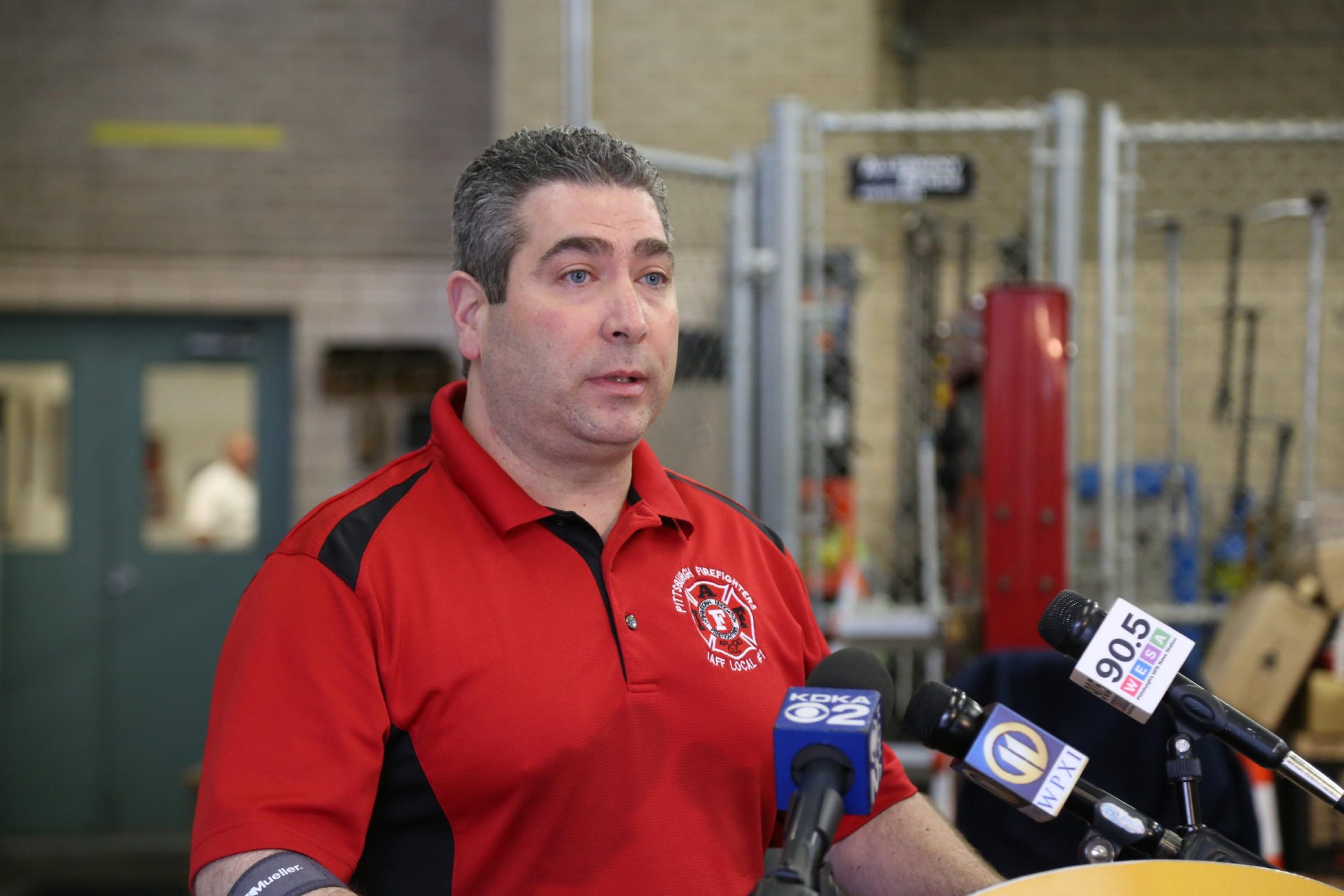 Ralph Sicuro, the president of Pittsburgh Firefighters Local No. 1, speaks at a press conference at the fire training facilities on March 28, 2017.

“We have a supply of them, but those can go through rather quickly as calls ramp up and we’re using more and more on these calls,” Sicuro said. “We’re not able to get more replenishment in; it becomes a concern on what’s the next plan if we’re not getting resupplied in enough time.”

Chris Togneri, a spokesman for the city’s Public Safety division, says officials can’t “predict what’s to come and shortages certainly could become a concern depending on how long this lasts.”

“But at this time, we are not facing any shortages,” he added.

While the city doesn’t usually rely on donated sanitizer or other equipment, “The fact that it was donated does not somehow lessen its value. … Public Safety is constantly evaluating our inventory and seeking to replenish stockpiles when possible. We are constantly looking for additional supplies because of the uncertainty of this crisis.”

Sicuro said he believes city officials are doing the best they can under the circumstances – which include a lack of support from higher levels of government.

“[City officials] are continuing to work on getting their own supplies because the federal government has not stepped in to take over the purchasing for the United States,” he said. “Which, I think, most people want to see happen.”

The coronavirus has been a growing concern for first responders. Several firefighters have been put quarantined to guard against possible infection, as were police officers after an accident earlier this week that involved a driver who showed flu-like symptoms. The driver tested negative, and police were later cleared to return to duty.

Fraternal Order of Police President Robert Swartzwelder said he hadn’t heard of any shortages affecting police. He said that a more pressing concern for police was knowing whether anyone involved in an emergency call posed a coronavirus risk to first responders. State law currently limits the release of health information, but Swartzwelder says he hopes that can be changed.

“Officers should be notified if they are going to a call where someone tests positive,” he said.

Officials with the city’s paramedics union did not return calls for comment.