Amid coronavirus pandemic, when is it too early – or too late – to close Pa. schools?

With no known positive or presumptive cases, school officials here largely remain under the guidance of state and federal authorities. 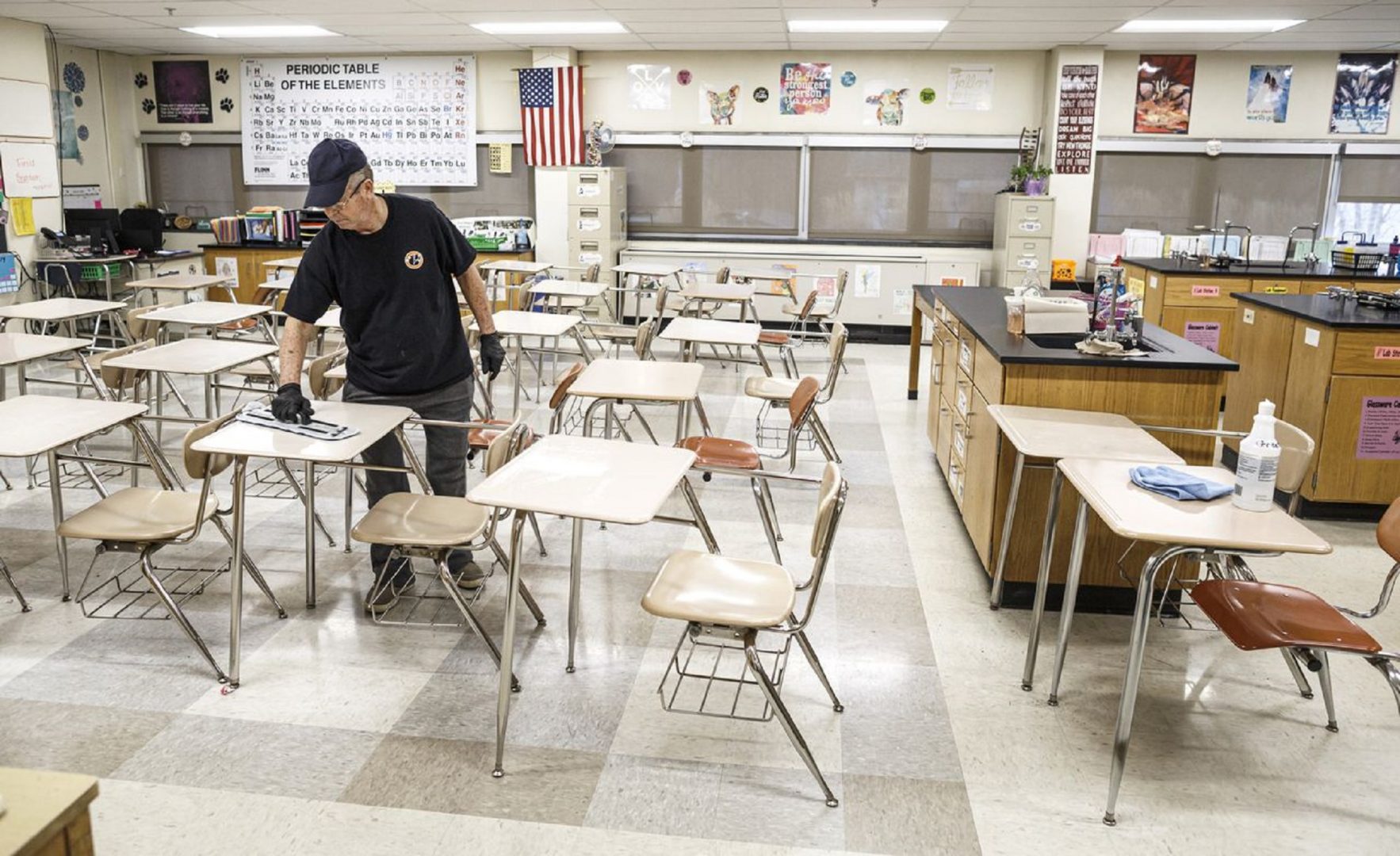 (Harrisburg) — Across Pennsylvania, dozens of schools have closed amid coronavirus concerns.

The Cheltenham School District, for instance, shuttered operations this week after officials there determined that a parent may have been exposed to a positive coronavirus case.

Dozens of other schools, the majority in the southeastern part of the state, have also canceled classes amid similar concerns.

But in central Pennsylvania, with the exception of unceasing reminders to wash hands and cough into elbow crooks, hundreds of thousands of students – as well as faculty and staff – have gone about their days as usual.

The State College Area School District told parents and staff Wednesday that the district would be closed to students next week in order to prepare for the coronavirus. So far, the vast majority of schools in central Pennsylvania are remaining open.

With no known positive or presumptive cases, school officials here largely remain under the guidance of state and federal authorities.

School communities remain in a wait-and-see mode. Still, they’re confronting a host of challenges, such as delivering instruction at home and aiding those kids who depend on schools for their meals.

“I think the challenge right now is really looking at when are we being preemptive and when are we being reactive, and when is it appropriate?” said David Christopher, superintendent of the 9,500-student Cumberland Valley School District.

Like the majority of school communities in central Pennsylvania this week, Cumberland Valley continued its day-to-day school operation unchanged.

“Is it appropriate to preemptively close schools when there are no cases in Cumberland County? That is hard for people to understand why you would do that. But, if you wait too long, you miss the window.”

Pennsylvania Secretary of Health Dr. Rachel Levine this week addressed a number of school-related topics at one of the many covid-19 preparedness forums. She said she wants schools to work with state health and education officials to reach their decisions.

The novel coronavirus continues to prompt widespread official decrees as the pandemic surpasses 120,000 cases worldwide. U.S. officials have listed 1,000 cases of the novel virus; Pennsylvania has 16 presumptive cases of coronavirus as of March 11.

Christopher, just like every other head of schools in the state, has been attending a string of preparedness meetings with local, state and federal authorities this week. Some of these forums have been online, others in person. All high-touch areas in a chemistry classroom are wiped down with a cleaning solution applied to a cloth. Custodial staff at East Pennsboro High School sanitize surfaces each day as a precautionary measure for the coronavirus, known as COVID-19, March 11, 2020

In recent days, the Department of Health has been holding daily online briefings with heads of schools.

School officials say that guidance continues to set the tone for their response to the potentially lethal virus.

“It’s not our intent to make a call in a vacuum,” said Dan Tredinnick, spokesman for the Derry Township School District. “If we have a student or staff identified as a presumptive case, the first thing we are going to do is talk to health officials. Do we need to adjust our school schedule or close? We are not going to make those decisions in a vacuum.”

Pennsylvania has a robust home-rule governance that allows its 500-plus school districts the ability to make such decisions as canceling schools due to snow or inclement weather. In this case, however, school officials say the decision to cancel classes or close schools is not theirs alone to make.

Christopher said it’s a decision he will make under the guidance of local authorities, as well as that of the state Departments of Health and the Department of Education.

That “something” is, for instance, a case of community spread in the county, which might prompt health officials to issue more strident advisories.

For now, the day-to-day business of school across the majority of school districts remain unchanged, save for a ramped up effort at all schools to sanitize door knobs, hand rails and other high-touch surfaces.

When it comes to school communities, response to the coronavirus entails numerous moving and fluid parts.

Heads of school districts, some of the size of small towns, are considering everything from the proper sanitation of schools, the promotion of best hygiene practices to students and faculty; and faced with the potential of school closure, planning remote learning curriculum.

One of the most compelling areas is that of the nutritional needs of students: School officials are scrambling to find answers to how will they feed sizable portions of their student population enrolled in federal reduced or free lunch programs if schools are canceled? For some kids, public schools are the place where they get solid meals.

“I have not come up with an answer,” said Christopher, whose district provides the nutritional program for 2,000 students. “It’s all uncharted territory.”

CORONAVIRUS CASES IN PENNSYLVANIA: Click to see where cases of the coronavirus are in Pennsylvania are located.

As district prepare for worst-case scenarios of potential protracted school closures, school officials are weighing the dilemma that some of their students may not have the technological resources at home to support remote learning. That includes internet service and laptops, computers, and even musical instruments.

Morgan Horton, a spokeswoman for the East Pennsboro Area School District, said officials there have already broached that hurdle.

“We’ll be asking faculty to prepare lessons that can be done by all our students,” she said.

In addition to stressing good hygiene protocol, the Department of Education, for instance, continues to encourage districts to work with local health and emergency officials.

For now, it’s part of a learning process for everyone involved.

“It would be great if somebody had all the answers and could tell us what to do,” said Jim Hazen, spokesman for the Lower Dauphin School District. “That would be ideal. In terms of school safety, state and federal officials will tell you that any emergency response starts at the local level. As you need assistance, you go to the county, state and federal level. So while it would be great if somebody had all answers, this is the Homeland Security enterprise. The local level deals first then moves up that chain of command.” The State College Area School District announced it will remain out of session for students until March 20.

Just about every school has a so-called Safe School Plan that addresses such emergency situations as pandemics. For most school districts, annual flu outbreaks and the managing of school communities during the flu season is par for the course during any given school year.

Indeed, the 2009 H1N1 swine flu outbreak provided some lessons for school officials to prepare for these kinds of emergency situations.

“We are not starting at zero,” Christopher said.

Tredinnick said school officials are putting a lot of energy into following general guidelines, but are bracing for specific situations to respond appropriately.

“The general overall feeling in society is that of unease,” he said. “Fear has spread faster than scientific knowledge. It’s natural because people aren’t as comfortable or familiar that they are going to have a sense of what if. School districts aren’t immune to that. The danger is getting caught too much in the hypothetical. You can’t answer all the what ifs if you don’t have all the information.”

School districts across central Pennsylvania may not be making wholesale sweeping decisions about closures, but they are making smaller decisions about activities and programs.

Derry Township School District, for instance, which houses 3,500 students on a single three-school campus, recently canceled a field trip to New York City after the city confirmed its first case of covid-19.

Lower Dauphin School District canceled its band trip to an indoor competition in New Jersey, which has active coronavirus cases and has seen one fatality.

Many schools have already hosted their spring musicals, so that’s one less large gathering event for many to worry about.

But almost daily officials are looking at activities and programs and weighing them against potential risks.

“We haven’t had anything we’ve had to cancel ourselves, but that’s within the realm of possibility,” Hazen said. “We haven’t reached that level yet. We are playing a waiting game and seeing how this plays out.”