Bong Joon Ho, right, reacts as he is presented with the award for best picture for "Parasite" from presenter Jane Fonda at the Oscars on Sunday, Feb. 9, 2020, at the Dolby Theatre in Los Angeles. Looking on from left are Kang-Ho Song and Kwak Sin Ae.

The acting awards this year had heavy favorites going into the ceremony. 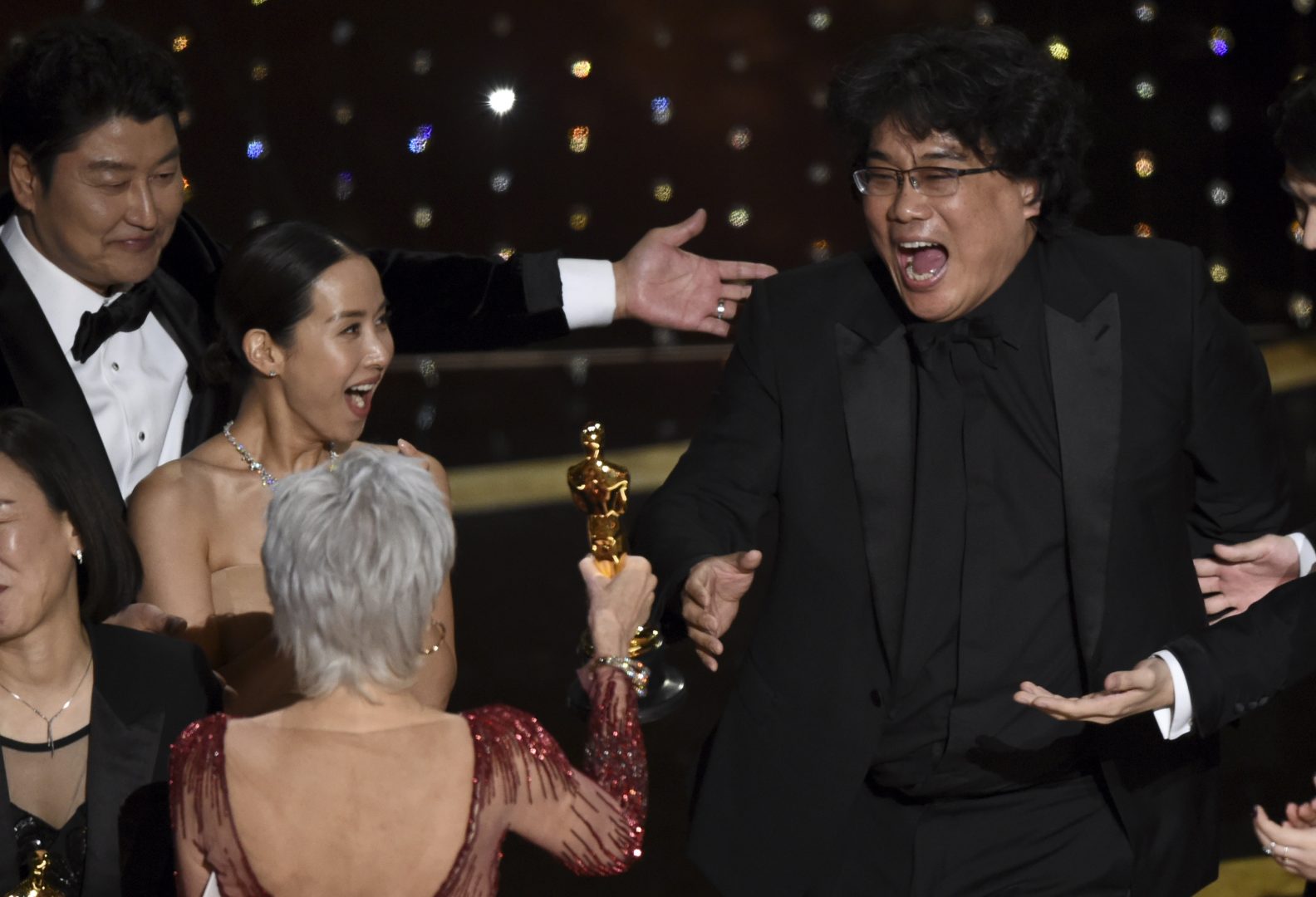 Bong Joon Ho, right, reacts as he is presented with the award for best picture for "Parasite" from presenter Jane Fonda at the Oscars on Sunday, Feb. 9, 2020, at the Dolby Theatre in Los Angeles. Looking on from left are Kang-Ho Song and Kwak Sin Ae.

(Los Angeles) — At Sunday’s Oscars, on a night when almost everything went as planned and as usual, the one true surprise came in the biggest moment of all.

For the first time ever, a film in a foreign language won best picture when Bong Joon-ho’s Parasite, a comedy-drama-thriller about class and secrets, took the big prize. Bong also won the awards for best director and best original screenplay. He delivered three warm and generous speeches, including one when he won for his directing and thanked fellow nominees Martin Scorsese and Quentin Tarantino for inspiring him and boosting his career, respectively. (He acknowledged Sam Mendes and Todd Phillips, too.) And, while he gave most of his speeches in Korean with interpreter Sharon Choi, when he won the first one, he stopped and noted in English: “This is very first Oscar to South Korea.” The affection in the room for the film was evident every time it was mentioned, as well as in its strong haul of awards (though it absurdly landed not a single nomination for its uniformly excellent cast).

The evening began three and a half hours earlier with a combination of the old and the new: the kind of themed singing-dancing number that used to be the typical Oscars opening, but in the absence of a traditional host, it was performed by the thoroughly modern Janelle Monáe. A version of her own song “Come Alive” was accompanied by dancers dressed in costumes saluting not just nominated films like Joker, but also conspicuously snubbed ones — several of them, but not all, from black filmmakers — including Us, Queen and Slim, Dolemite Is My Name and Midsommar. The monologue that followed, however, was much more creaky and awkward, despite the best efforts of Chris Rock and Steve Martin (the latter of whom regrettably blew the name of best actress nominee Cynthia Erivo).

The awards in general, and the ones this season in general, have been heavily criticized for how white the nominees are, the failure to nominate any women directors in a year when several made highly regarded films, and plenty of other shortfalls in inclusivity. The Academy’s discomfort with that criticism seemed evident: There may not have been a lot of performers of color among the nominees, but there were a lot among the presenters and speakers and performers. Several presenters — as well as Monáe in her opening number — made mention of the limitations at issue, which is the kind of thing that happens when people are placed in a situation they don’t want to ignore but also aren’t there to challenge too much.

One new inclusion was a land acknowledgment — a custom that’s commonly observed in other places, including Canada, at cultural events (I’ve personally seen them at the Toronto International Film Festival). In this case, it was writer-director Taika Waititi, nominated for Jojo Rabbit, who read an acknowledgment of the indigenous people who have lived on the land where the event — in this case, the Academy Awards — takes place. Whether this gesture will be followed up by any action as to the broadening of the Academy’s taste remains, of course, to be seen.

Parasite‘s win for best picture stood out particularly because almost all of the other awards that had seemed likely to go a particular way did: Legendary cinematographer Roger Deakins won for his work on 1917, the WWI film engineered to look like a continuous shot. Film editing is often a precursor to other big awards, and this year the winners were the editors of racing drama Ford V. Ferrari. Parasite had been expected to win (or at least to contend strongly) in the categories of best international feature film and for Bong Joon-ho’s original screenplay. Waititi was a favorite for best adapted screenplay, which he won. 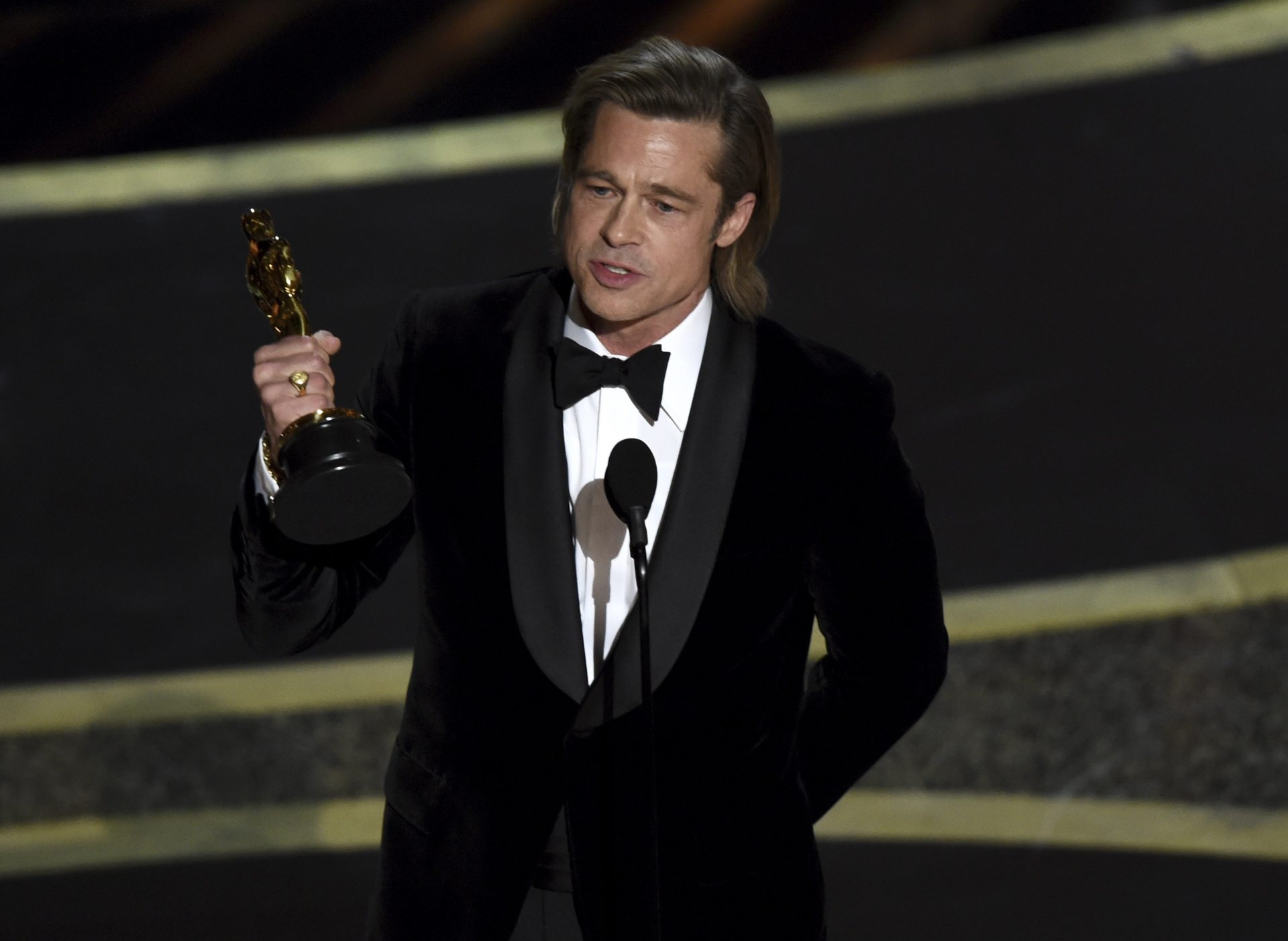 Brad Pitt accepts the award for best performance by an actor in a supporting role for “Once Upon a Time in Hollywood” at the Oscars on Sunday, Feb. 9, 2020, at the Dolby Theatre in Los Angeles.

The acting awards this year had heavy favorites going into the ceremony: Joaquin Phoenix as best actor in Joker, Renee Zellweger as best actress in Judy, Brad Pitt as best supporting actor in Once Upon a Time in Hollywood and Laura Dern as best supporting actress in Marriage Story. They all won. Most of them said about what you might expect (although Phoenix surprised many of us by adding to his speech about fighting injustice a mention of the cruelty of artificially inseminating cows and then stealing their offspring, while Zellweger listed many of her heroes in a speech that matched his, meander for meander).

The lower-profile (but critical) behind-the-scenes awards were spread across a bunch of films. Best production design went to Quentin Tarantino’s Once Upon a Time in Hollywood, which re-created the late-’70s L.A. landscape and aesthetic with a lot of loving attention. Little Women won its only award of the night for Jacqueline Durran’s costume design, full of beautiful dresses both fancy and not. The transformation of actors into familiar faces from the news won an award for the hair and makeup team from Bombshell. The sound editing award went to Ford v. Ferrari and both sound mixing and visual effects went to 1917. 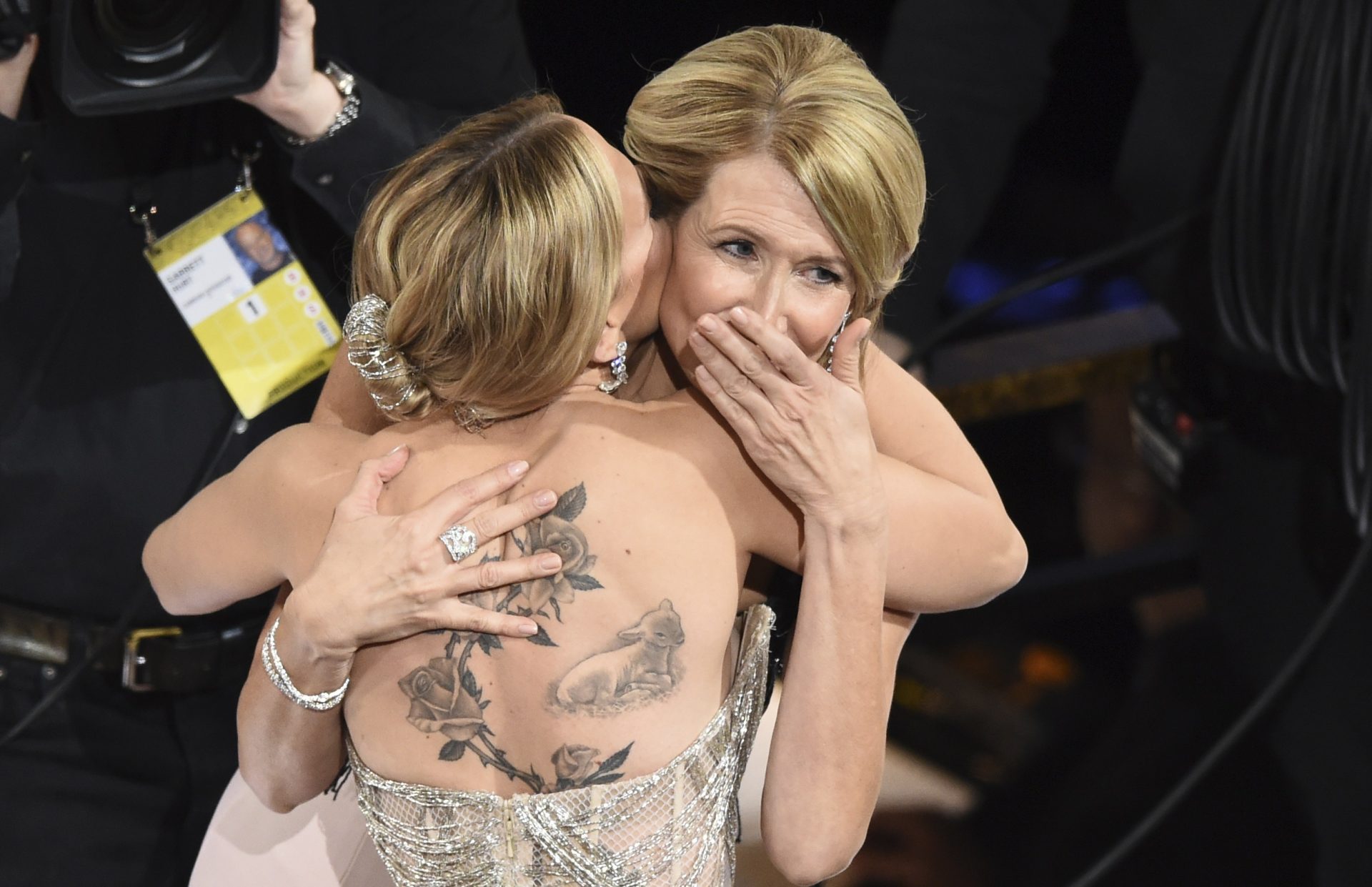 Scarlett Johansson, left, congratulates Laura Dern, winner of the award for best performance by an actress in a supporting role for “Marriage Story” at the Oscars on Sunday, Feb. 9, 2020, at the Dolby Theatre in Los Angeles.

The non-surprises kept coming: Toy Story 4 won best animated feature. Best documentary feature was awarded to American Factory, which boasts Barack and Michelle Obama as producers and which comes from Netflix. Hair Love, a lovely film about a father learning to do his daughter’s hair for the first time, written and directed by Matthew A. Cherry, won best animated short, and Cherry dedicated the award to Kobe Bryant: “May we all have a second act as great as his was.” Best live action short film went to The Neighbor’s Window, and best documentary short subject went to Learning to Skateboard in a Warzone (If You’re a Girl).

The nominated best original songs were performed on stage as usual. Introducer Josh Gad had some fun pointing out that Idina Menzel’s name is “pronounced exactly as it’s spelled” (take that, John Travolta) before she performed “Into the Unknown” from Frozen 2. Menzel was joined by some of the singers who have performed the song in other languages in one of the evening’s better innovations. Chrissy Metz performed “I’m Standing With You” from Breakthrough, accompanied by the choir that’s nearly obligatory. Randy Newman performed “I Can’t Let You Throw Yourself Away” from Toy Story 4, and Cynthia Erivo (also nominated for best actress) performed the song “Stand Up (From Harriet),” which, as its title suggests, is from Harriet. Elton John performed “(I’m Gonna) Love Me Again” from Rocketman, seemingly hamstrung by a bad sound mix.

When they’d all been heard, “I’m Gonna Love Me Again” was victorious. Hildur Guðnadóttir won best original score for her work on Joker.

The musical moment you probably would not have expected — because, really, who could? — was that actor Anthony Ramos introduced Lin-Manuel Miranda; Lin-Manuel Miranda introduced a montage saluting the music used in movies over many decades; and that montage led to Eminem performing the Oscar-winning “Lose Yourself” from 8 Mile, to which the audience responded rapturously. It wasn’t an obvious move to throw in that performance, given that it’s not celebrating any kind of round-numbered anniversary; it won at the 2003 ceremony, though Eminem didn’t perform it then. But it made people happy and got the crowd going like nothing else did all evening except Parasite winning awards, and there’s something to be said for that. Not long after, there was a recap rap from Utkarsh Ambudkar, an actor who appeared this year in Brittany Runs a Marathon, reminding everyone what had happened so far. That’s a lot of rap for an Oscars ceremony.

Last year’s ceremony also went without a host, and it wound up being dominated by the actual wins and losses. That made big nights for Green Book and Bohemian Rhapsody, neither of which seemed to excite the crowd, very disappointing. But this year, the fact that there’s good feeling around so many different films — and enormous respect and love for both Parasite and Bong Joon-ho — means that this ceremony fared much better.