Bells is a Lancaster-based post-rock band whose music can be described as cinematic. From moments of wonder and contemplation to agitation and aggression, their songs paint evolving landscapes of emotion. During live performances the band often projects patterns and images behind them to complement the music. 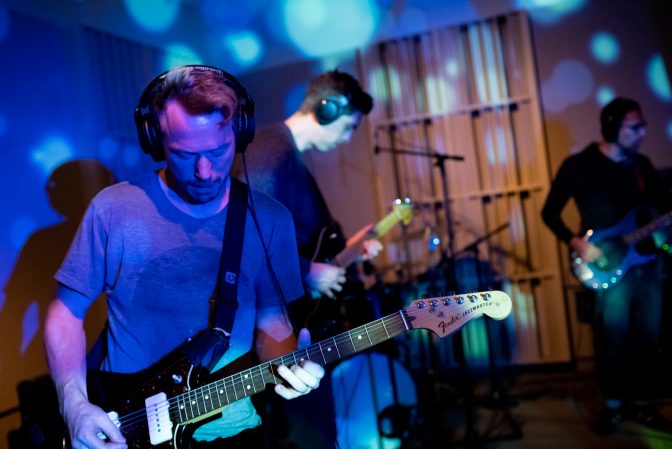 “A theme for me in writing … is trying to capture making myself remember and feel how I felt when I was younger,” says Sean Hennessey, the band’s guitarist, bassist and keyboardist. “I hope that we create maybe a sense of yearning.”

Guitarist Joe Terranova adds to that: “That idea kind of takes on special meaning, because some of us have kids now. I think now especially … elementary school kids have tablets, phones and the world’s moving a million miles an hour. So I think about that all the time: how do we slow things down for our kids and help them experience a childhood? … How do we encourage them to experience that, to live in the moment rather than where society wants them to go, wants them to grow up real quick?”

“The genre’s typically called ‘post-rock’ if you want to be formal about it,” Tim says. 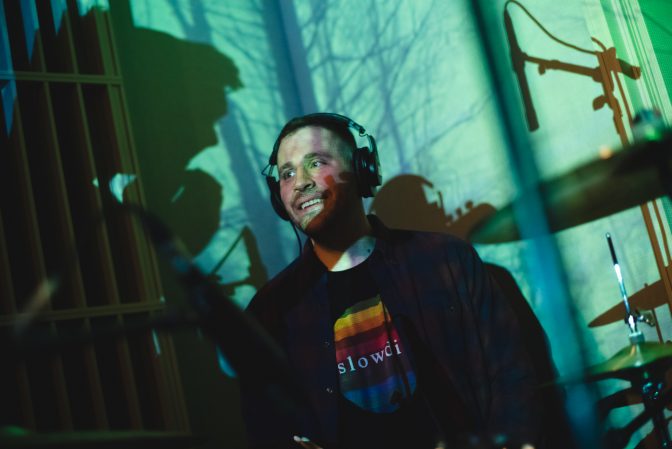 “I forget who did a write-up on us, they said it was like cinematic rock,” Sean adds. “It kind of lends itself well to visualizing cinematic sequences.”

Sean continues, “But we like to drip in little electronic blippies and that kind of stuff for sure.”

Bells music is rich with layers of synth pads, percussive electronic noises (aka “blippies”) in addition to the guitars and drums. The depth of instrumentation and sound belies the number of people in the band.

“We work really well recording and writing at the same time,” Jon says. “Sean and I have done that a lot where we’ll lay down a track and then be like, ‘Let’s try and write a little blippy synth part here.’ Then that turns into something else. Then we’re inspired to do another thing. Next thing you know there’s like a million layers. … [Playing] live is hard to pull off, and we have to sample a lot because we’ve written so many layers and we’re only five people.”

“We have leads and everything that we’ll play and then there will be soundscape, textural things that get sampled,” adds Sean. 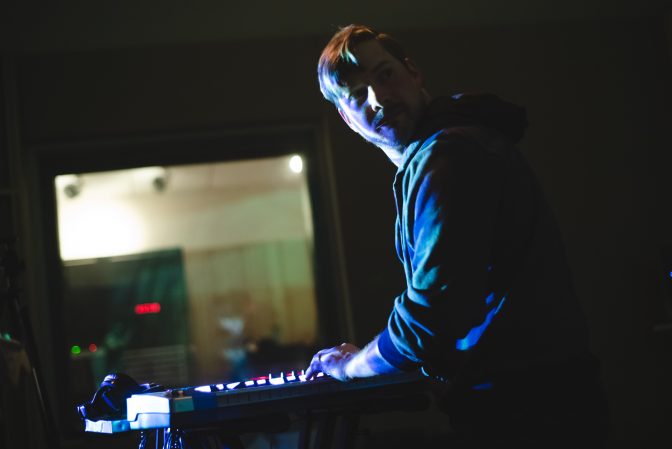 Tim puts together the videos they project during performances.

“I pick a theme or a motif for each song … Then I get a collage of video together from public domain. … And each instrument will be assigned with a clip of video so that it all syncs together. So the kick drum will be assigned with something bright or flashy, so that each time that hits, the video responds to that. And then the theme of the video will just naturally unfold as the video goes on, as the song goes on.”

The band’s music ranges from very quiet to very loud and uses odd time signatures and changes in time signatures. Sean says it takes practice to put everything together.

“There’s a lot of ramp-up time. It takes a long time for us to come together. We really massage our volumes and dynamics as best as possible.”

“I always look up to a band like Pink Floyd,” says Sean, “who you always hear were obsessive about making sure every note and every volume and every tonality, every hit was just absolutely perfect. And it shows in their performance.” 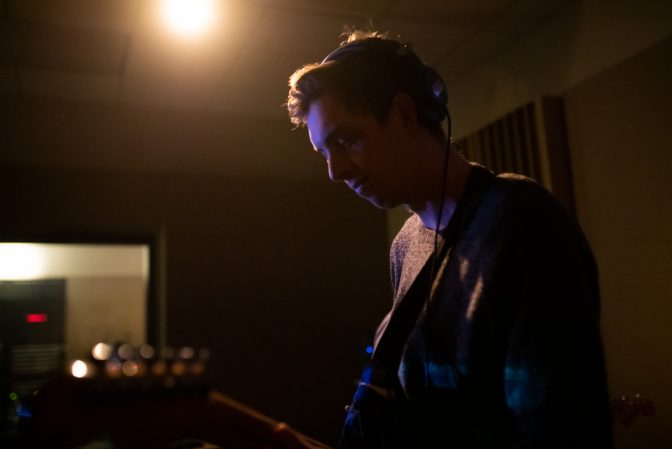 All of these time signatures and changes rest on top of the drums which Toby says he works with Sean to perfect.

“[Sean] will have a song idea in his mind and he’ll have a rhythm in his mind, and I’ll sit down and listen to it [and I’ll think], ‘Is this even possible to play?'” Toby says. “With the song we played today, ‘Noosphere,’ the end of it — it sounds kind of simple but I’m doing this thing on my foot that’s just a constant dah-dah, dah-dah … the whole time my hands are doing different rhythms.

“We practiced on it for a few months and Sean was always like, ‘Nah it doesn’t sound right still,'” he says as the band laughs. “It takes me a lot of time sometimes with the drums because it is weird time signatures…” 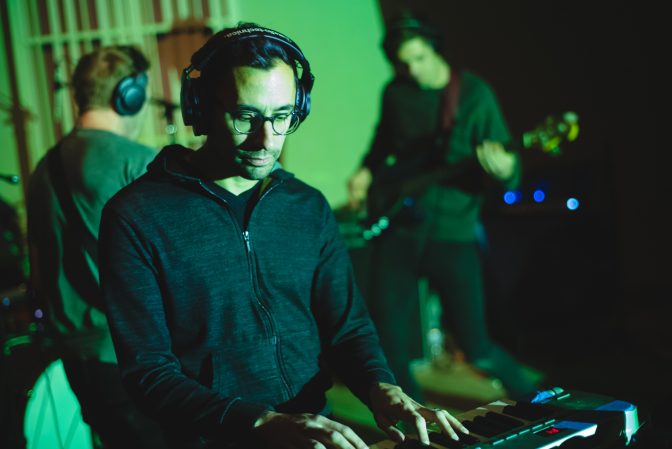 The cinematic nature of Bells’ music has caught the attention of others in the media industry. HTC licensed a song of theirs for a commercial. Their music has also been used in film productions.

“Ultimately, I think one of our biggest goals would be to be in some kind of film,” Sean says.

“To be a soundtrack of a whole movie would be the ultimate,” Toby adds.

“Or to be able to write for the film,” Joe says. “So any producers or directors out there listening, get in touch.”

“Anything. Documentary … anything … comedy … screwball comedy,” Jon says as the guys all laugh. 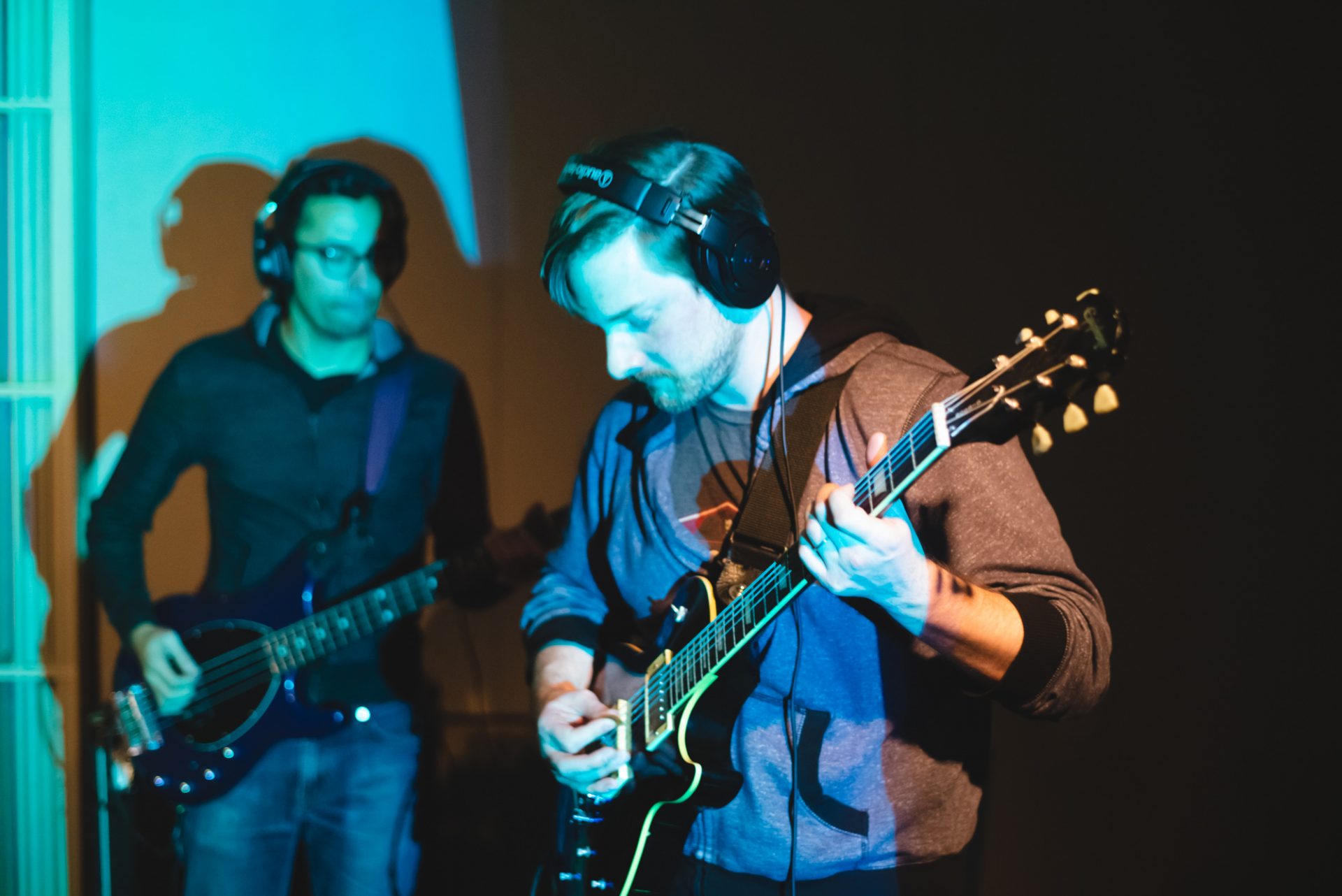 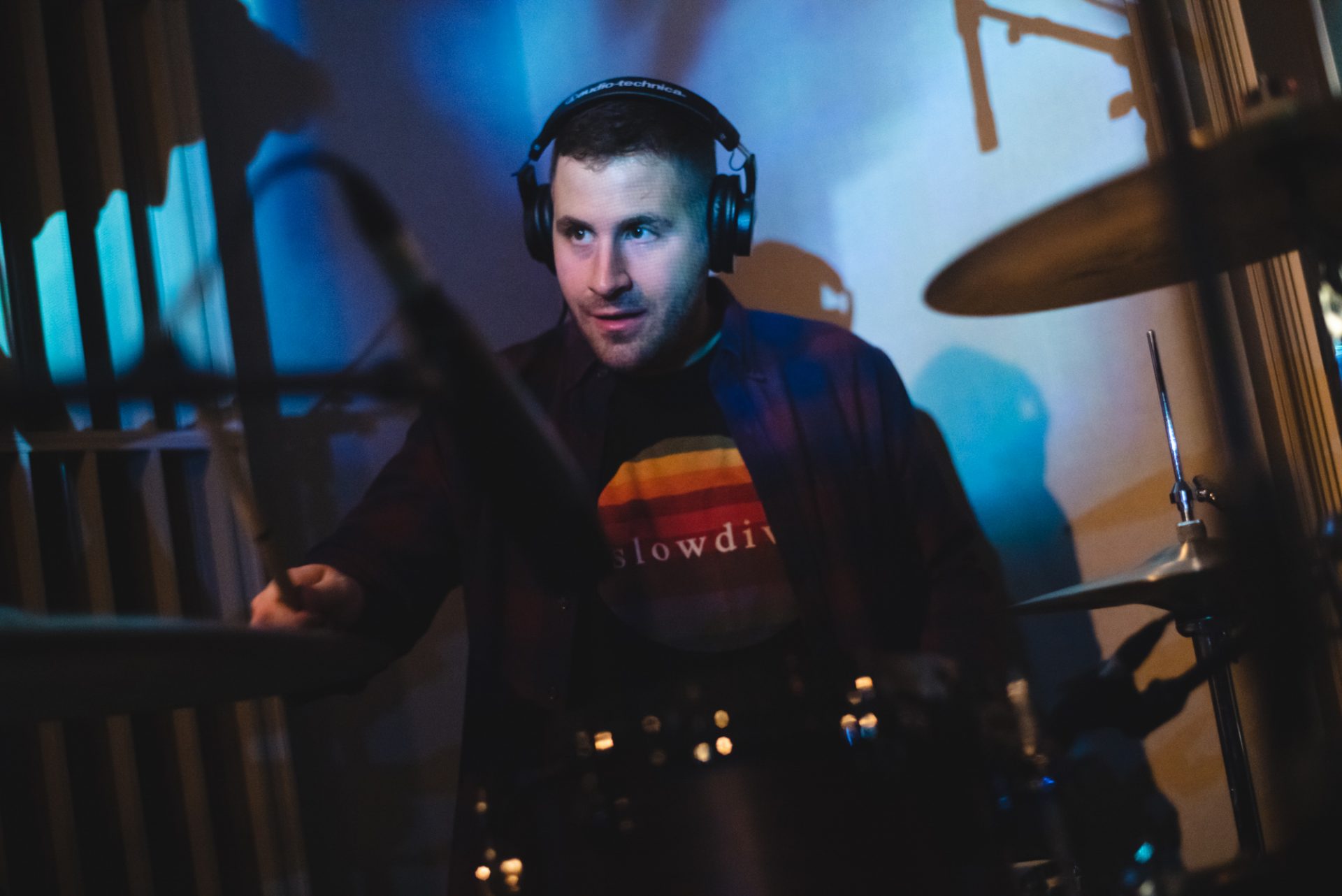 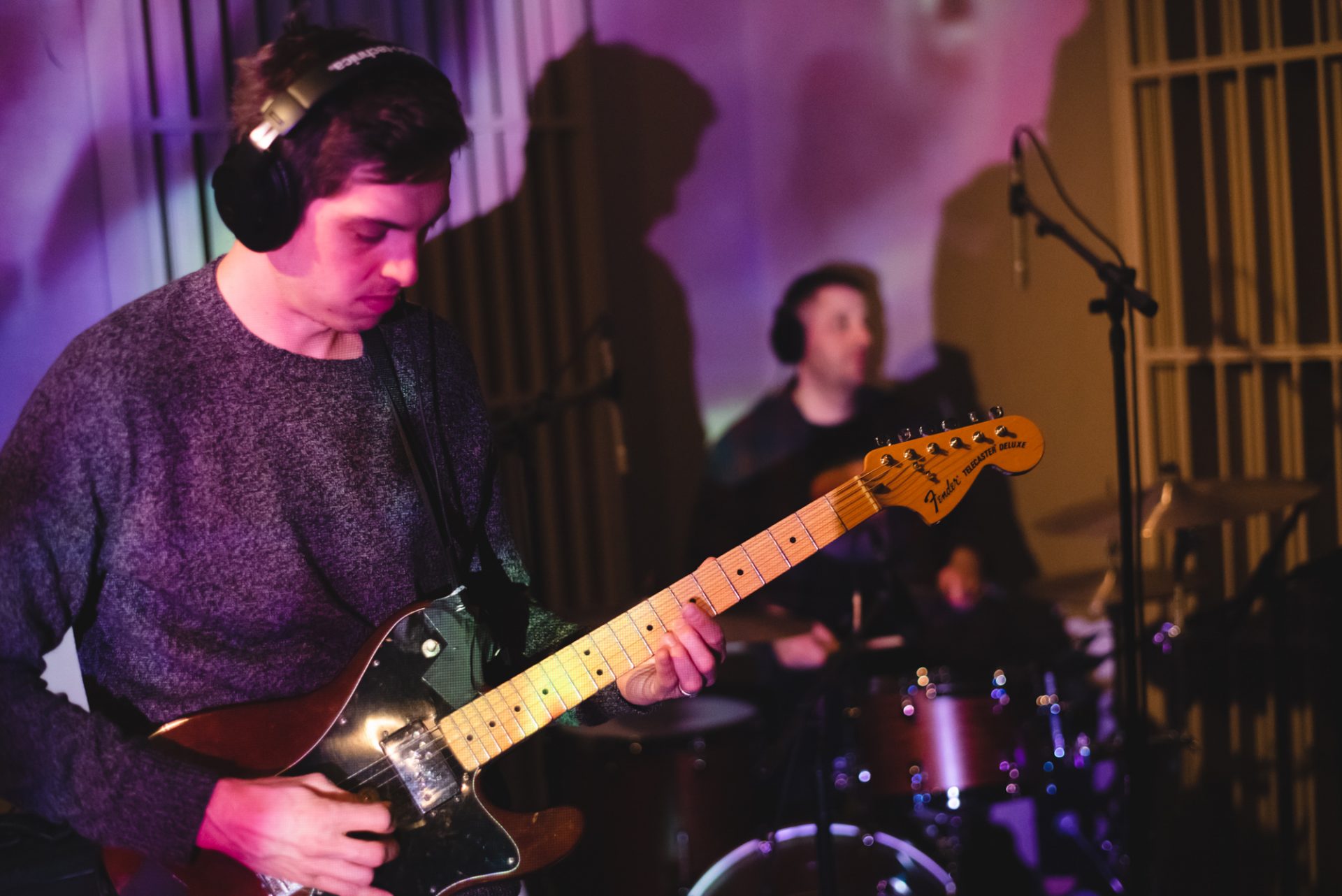 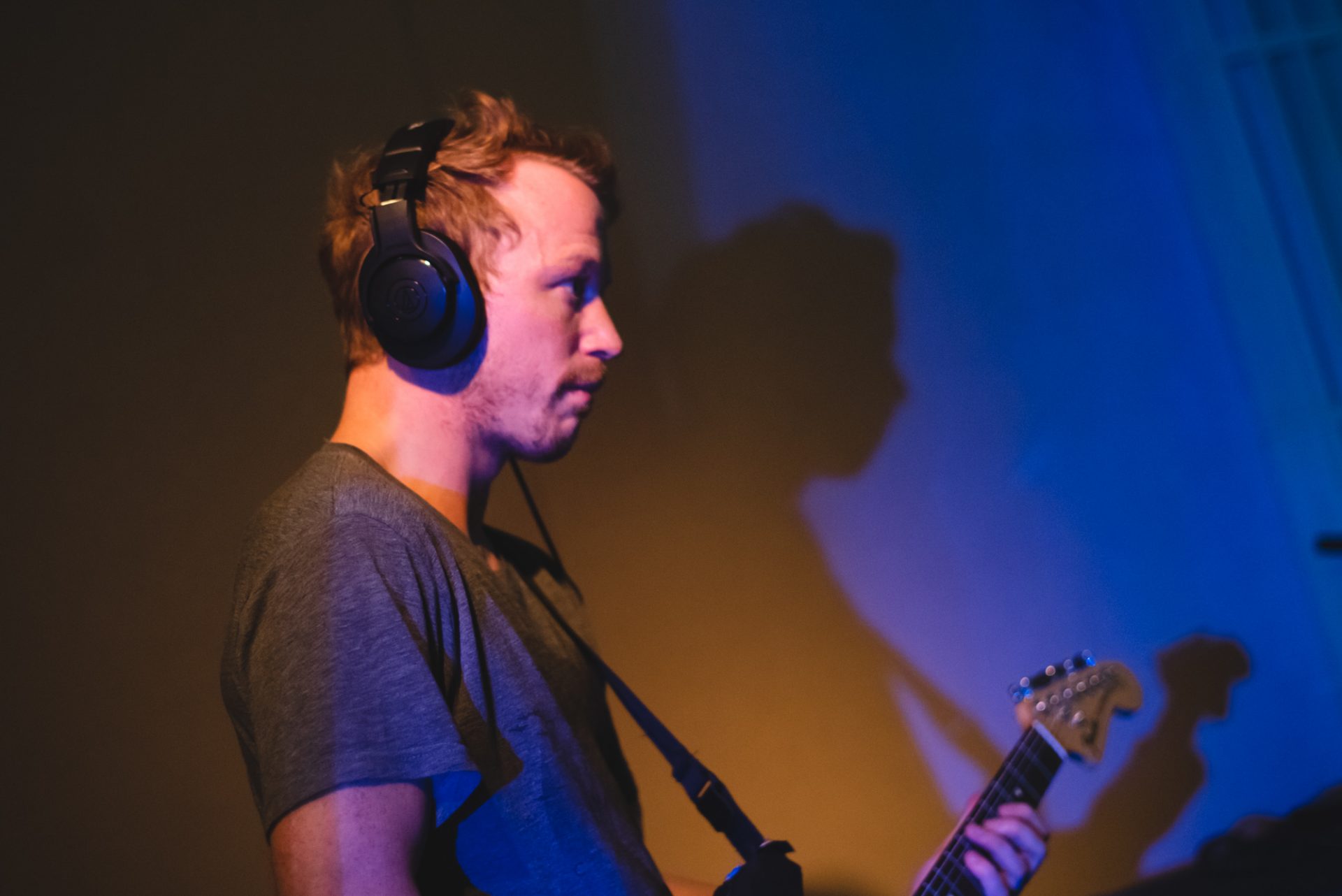 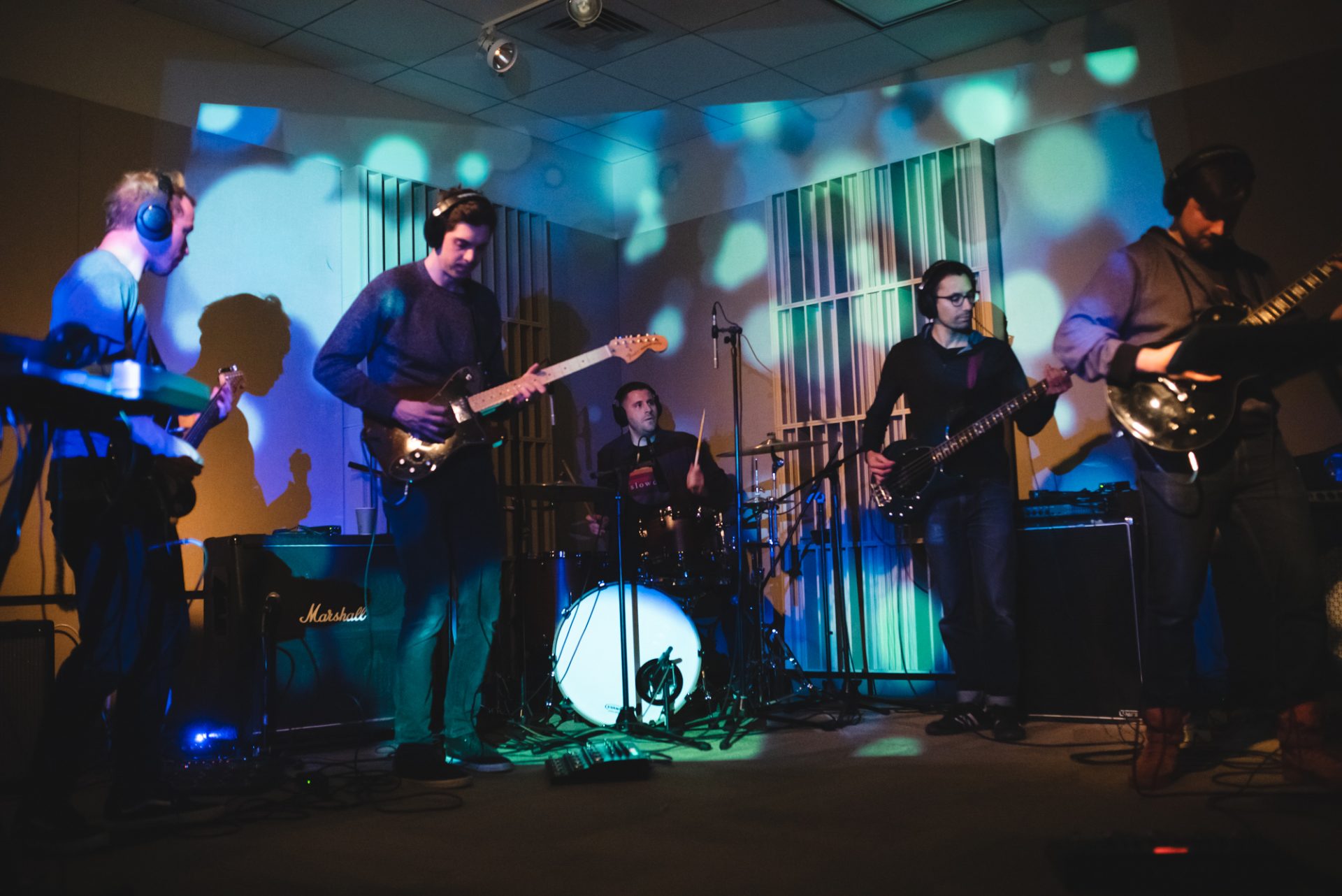 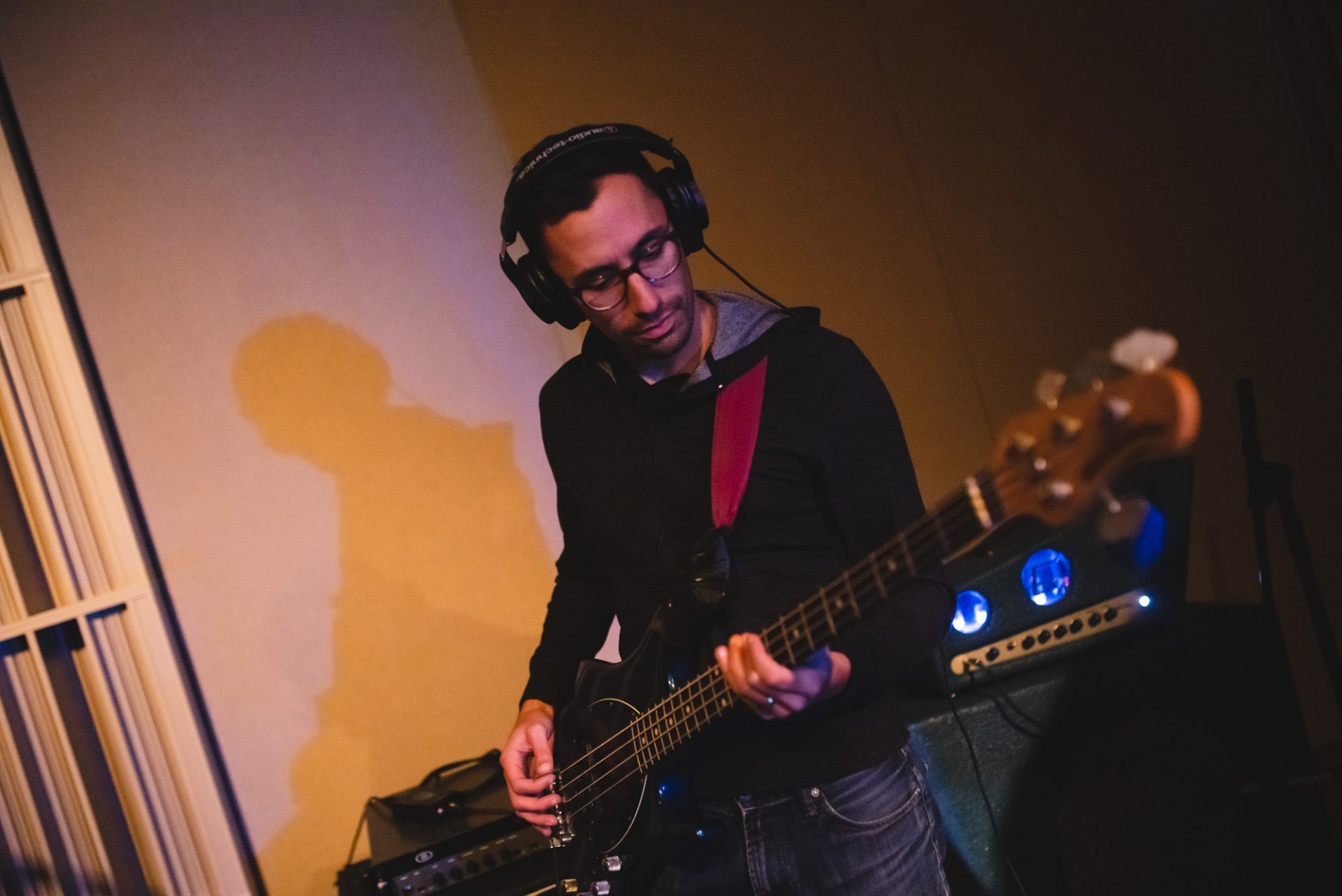 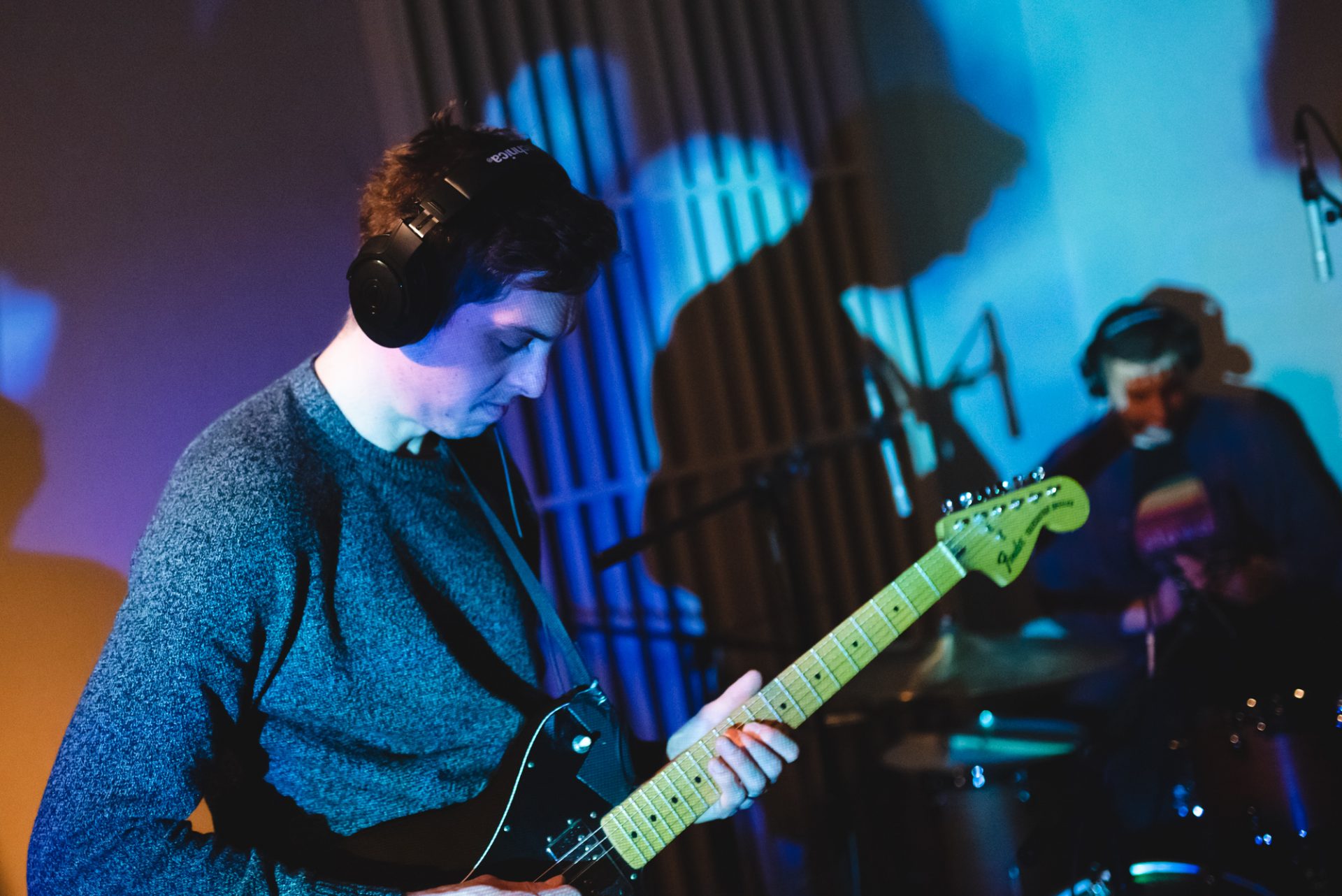 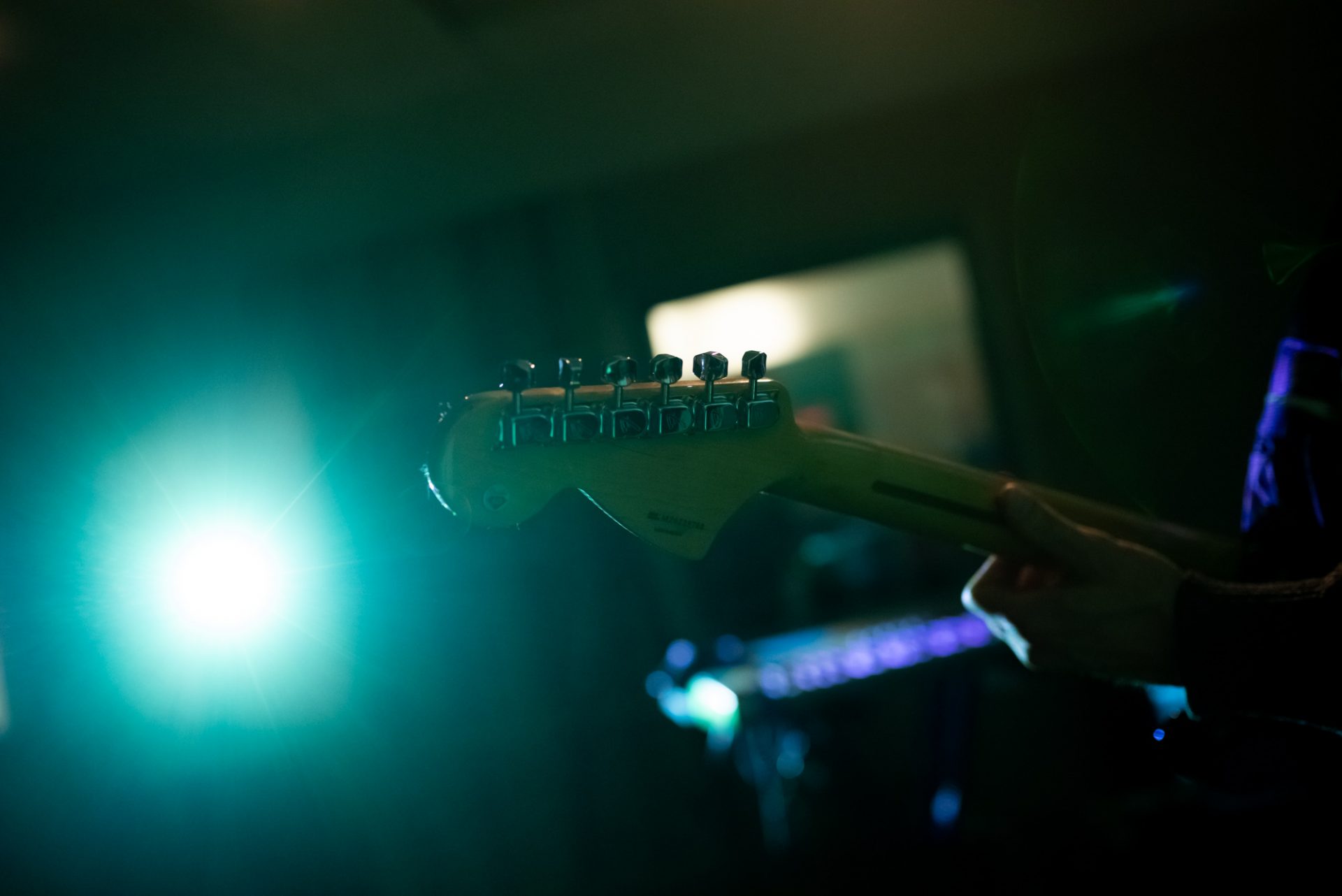 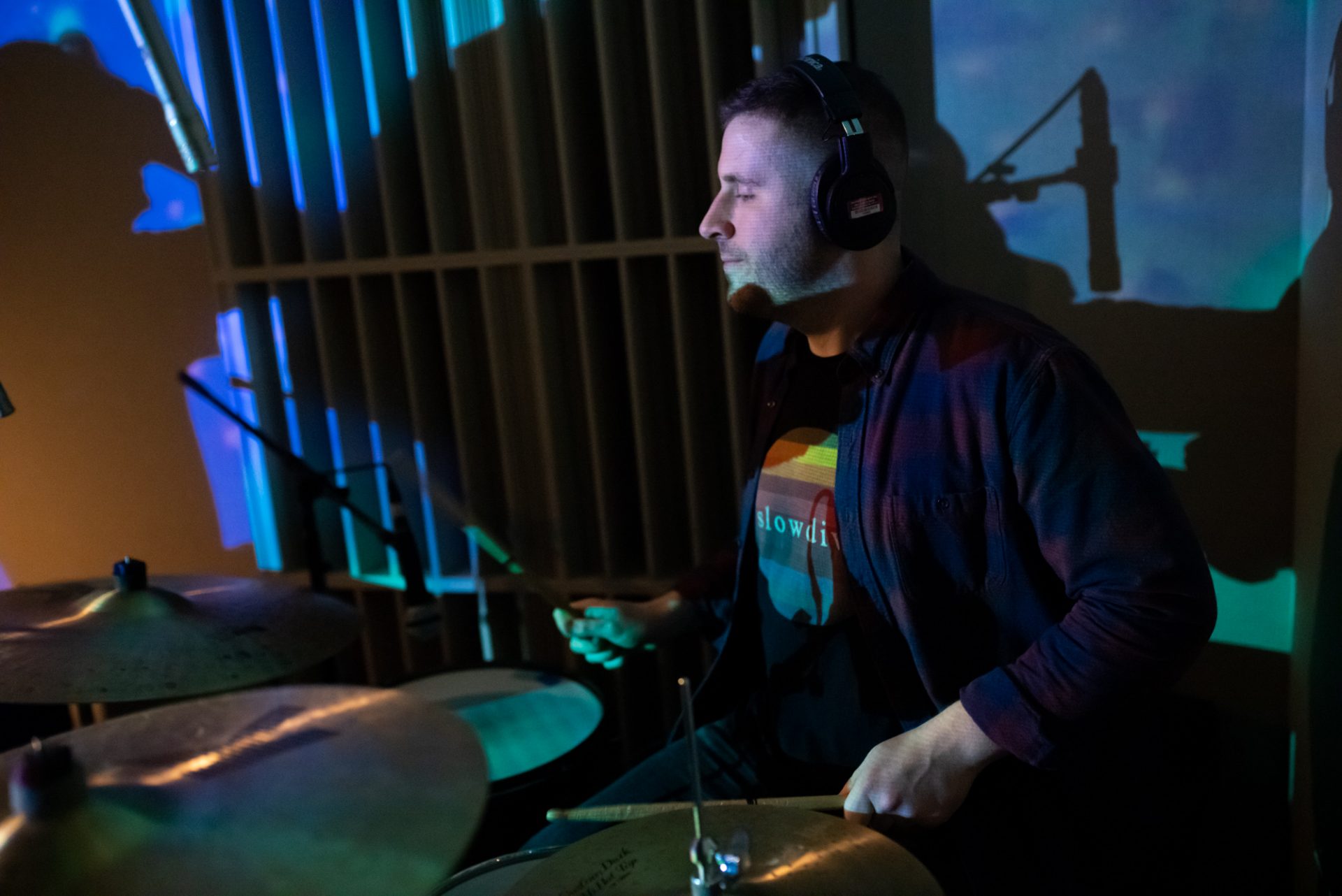 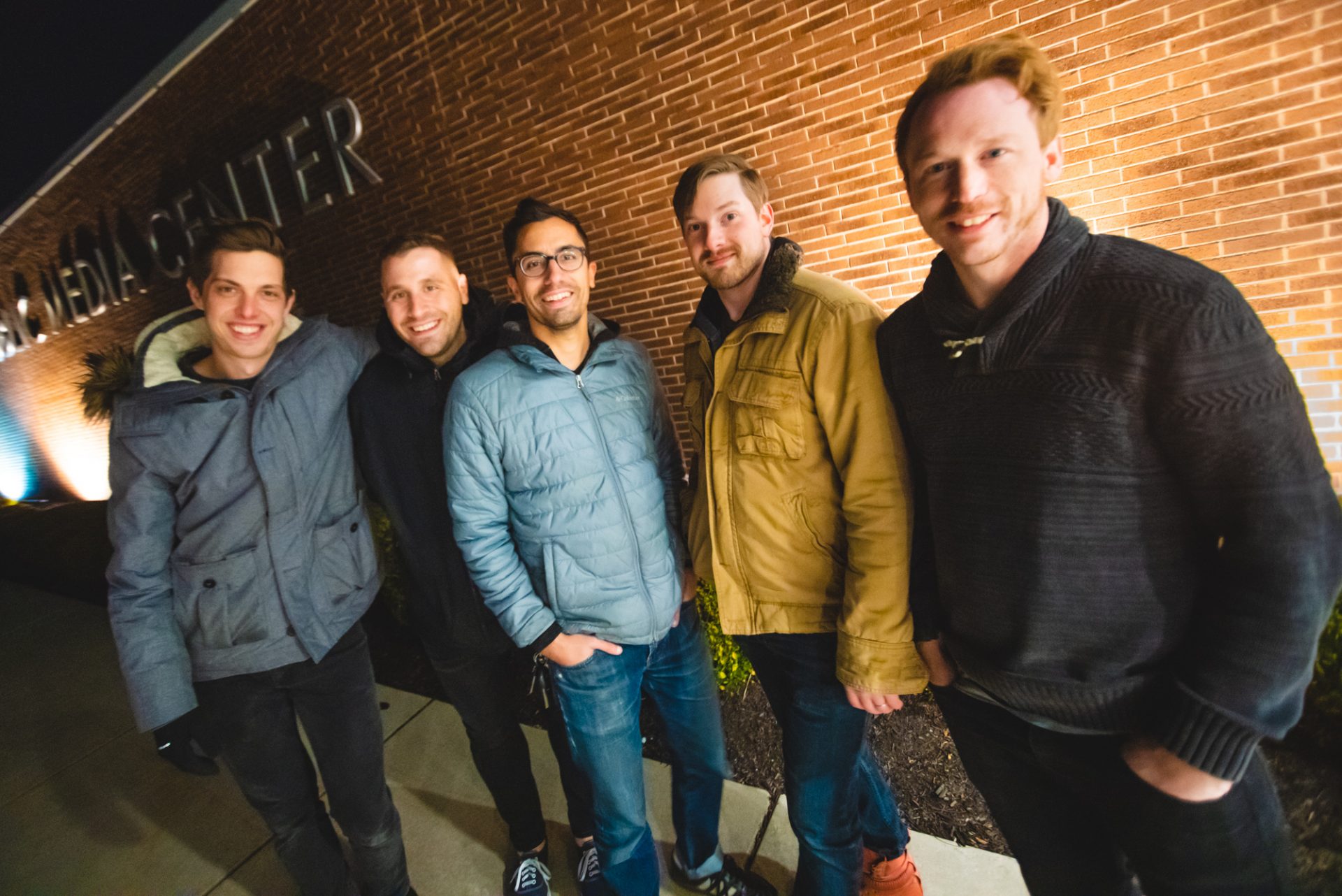