Postcard writing in groups has allegedly gained popularity since the election of President Donald Trump.

“We’re reaching out to people in Iowa from Pennsylvania to say, ‘Hey, we’re a key state and we’re all going to vote for (Warren).’”

(Philadelphia) — The first-in-the-nation Iowa caucuses are right around the corner on Feb. 3, and a small group of Philly politicos hope to sway some undecided caucus-goers in that state with some handwritten postcards.

On Sunday, more than 50 people backing Sen. Elizabeth Warren’s 2020 bid for the White House crammed into the La Colombe in Fishtown.

The volunteers commandeered tables as they slowly filled out stacks of blank postcards that read “Greetings from Pennsylvania and its 20 electoral votes!” with their elevator pitch for Warren.

“It’s back to basics,” said Elaine Griffin, who’s canvassed for several Democratic candidates for president, including Bill and Hillary Clinton, and John Kerry. “We’re reaching out to people in Iowa from Pennsylvania to say, ‘Hey, we’re a key state and we’re all going to vote for her.’”

While the postcards were serious business for Griffin — making sure to stress Warren’s “electability” in a swing state like Pennsylvania — she also said taking pen to paper in a bustling coffee shop was fun. 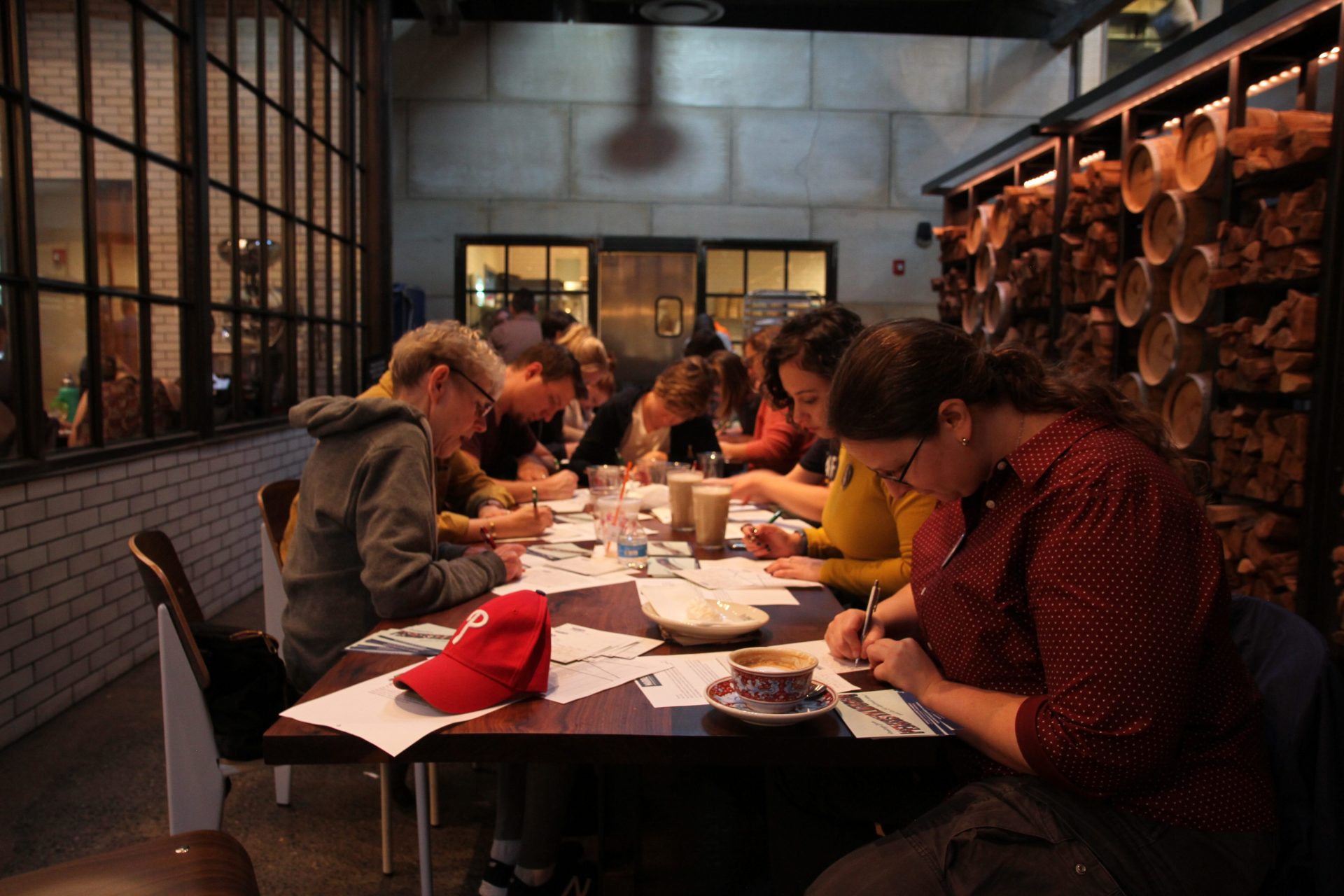 Though the idea of using postcards came out of the Warren campaign — which opened its first field office in the city last Thursday — volunteers found the form of outreach more rewarding than the usual phone banking.

“You have a stack of postcards at the end that you know are going to voters in another state, whereas sometimes if you phone bank you have a lot of hang-ups and inconclusive calls,” said Stefan Zajic, who filled out postcards with his wife as his two young children colored.

Some of the younger voters — who are new to volunteering for political candidates — thought postcards were a good way to test the waters.

“I think it felt like the least intimidating out of all of [the volunteer events],” said 25-year-old graduate student Angela Mastrianni, a first-time volunteer. “You’re writing on a postcard so it’s not quite like going up and approaching someone or knocking on someone’s door, so [it’s] an easy way to get into it.”

With the deluge of Democrats running for the 2020 nomination, the Warren campaign isn’t the only one harnessing the power of the pen.

Voters were able to fill out the cards with messages of why they were supporting Sanders.

Per Sanders’ press team, volunteers from across the country claimed more than 150,000 postcards within a few hours of the online launch. Some local Bernie supporters were among those who missed out on the postcard effort.

Warren’s campaign couldn’t be reached for comment, so it’s unclear how many postcards will be sent to Hawkeye State on her behalf. 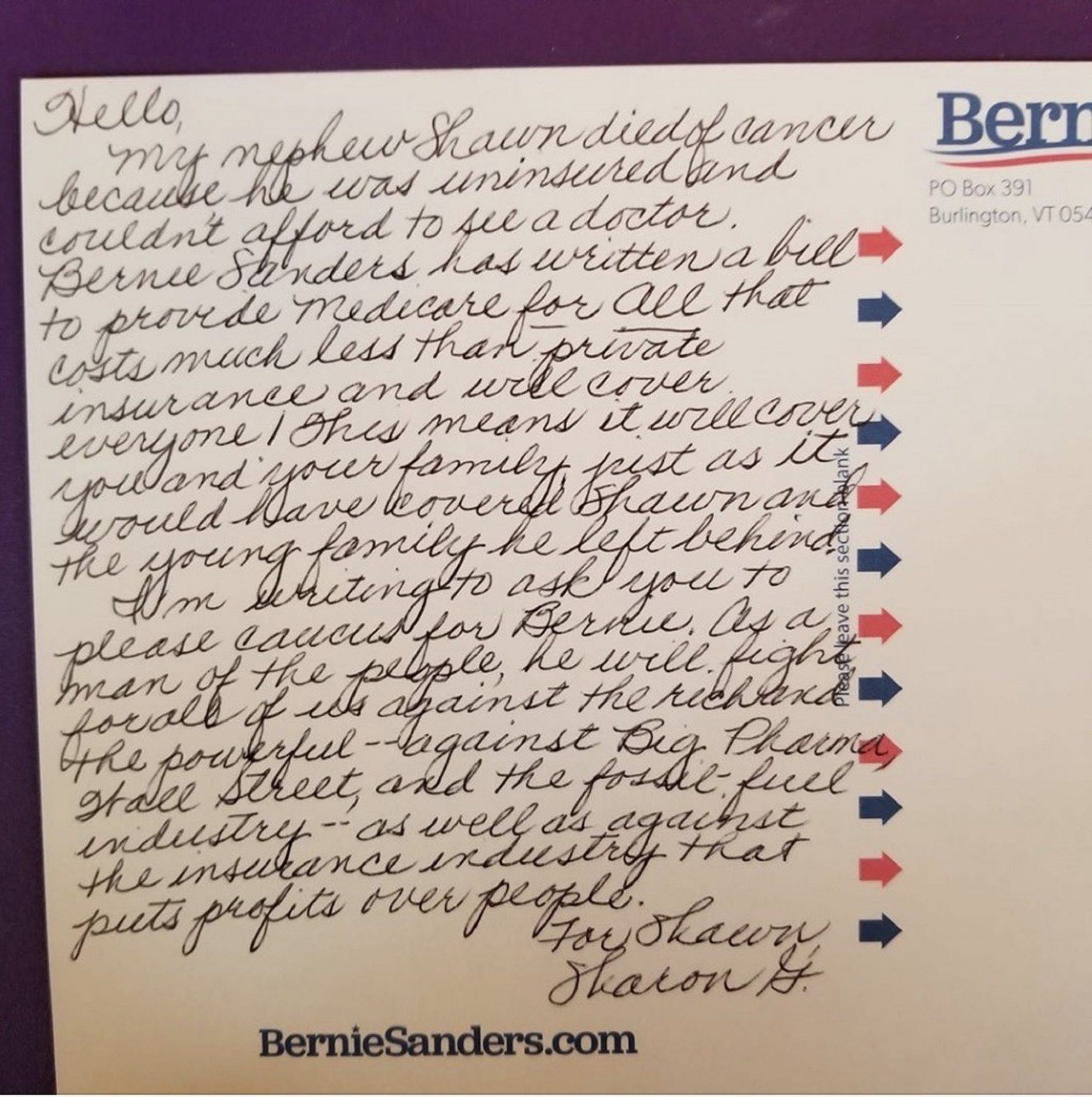 One of the postcards that will be sent to Iowa.

Postcarding as a trend

Postcard writing in groups has gained popularity since the election of President Donald Trump, according to the Washington Post.

Since 2016, groups like Postcards for America and Postcards to Voters cropped up, gaining members across the country.

Postcards to Voters focus their efforts on close contests they hope to flip blue, while Postcards for America groups target elected officials, weighing in on legislation and other issues of concern.

More recently, groups have taken to using old-fashioned snail mail as a way to get out the vote.

Indivisible Chicago Alliance created a 2020 “Postcard Posse,” with the goal of sending 500,000 postcards to neighboring Wisconsin in an “effort to increase turnout and create some new voters.”

Some activists are fed up with the limits of social media and “clicktivism,” Lingel said, and volunteers want to connect with voters on the receiving end of their pitch. 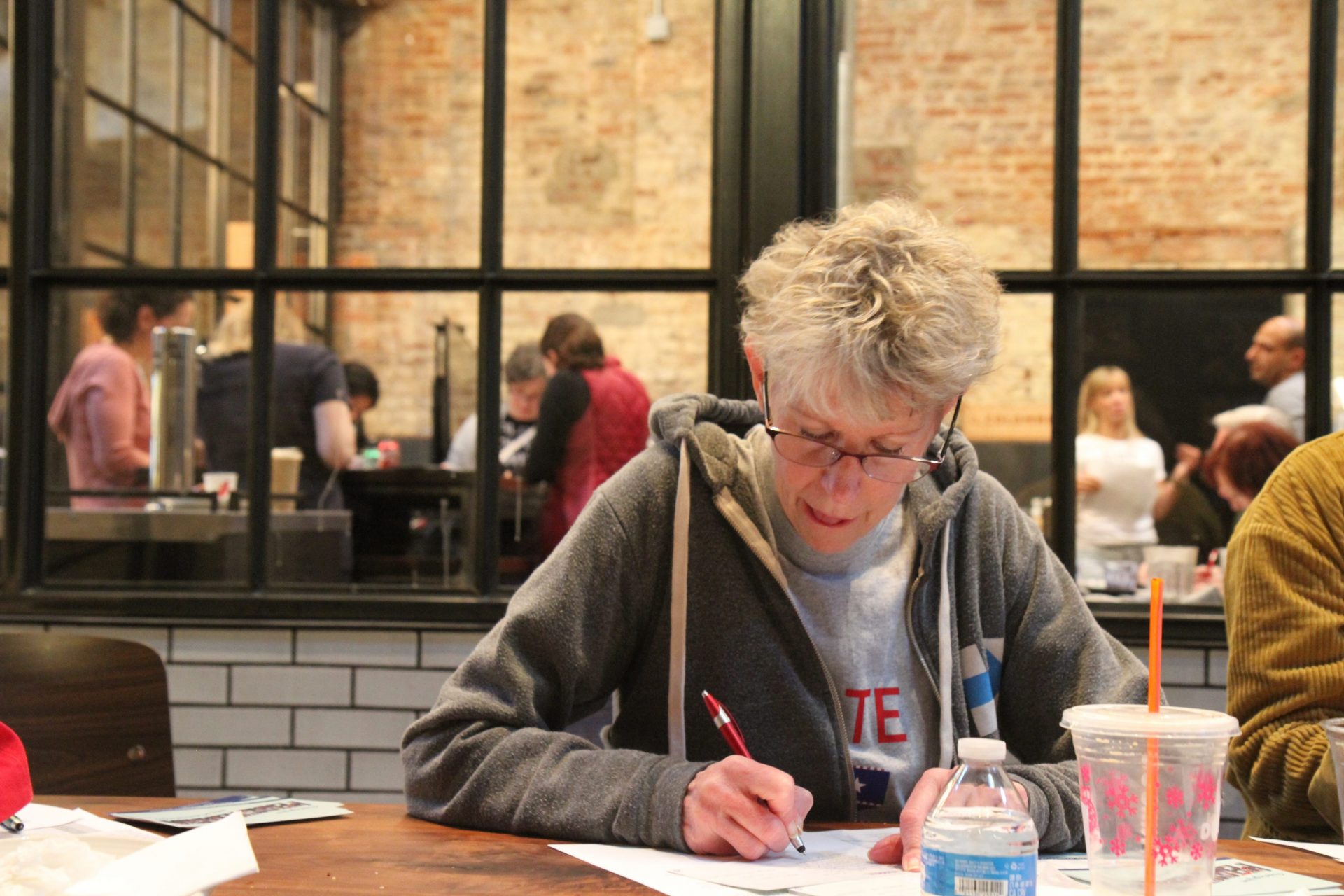 There’s not a lot of research on the use of these notes in campaigns.

Twenty years ago, two Yale University researchers found visits from canvassers were the most successful way to increase voter turnout. Direct mail and phone banks were less effective. But the mailers from those field experiments had pre-written and controlled messages.

Groups like Indivisible Chicago argue the personalized notes work. They point to recent wins in which two Illinois districts flipped blue where they targeted their mailing efforts.

Whether notes sway voters, there is some indication that volunteers who feel positively about their postcard writing experience are more likely to volunteer in a future event, per a 2017 survey conducted among a postcarding group that targeted Virginia.

Lingel can see why that could be.

Mastrianni, the grad student, is skeptical of how influential her batch of cards will be on Iowa caucus attendees, but she does think it could sway engaged voters deciding between a couple of candidates.

“I do feel like that maybe I could make a difference,” she said before picking up her pen again.