State Senate signed off on increase from $7.25 to $9.50, but it's not clear if the House is willing to follow suit 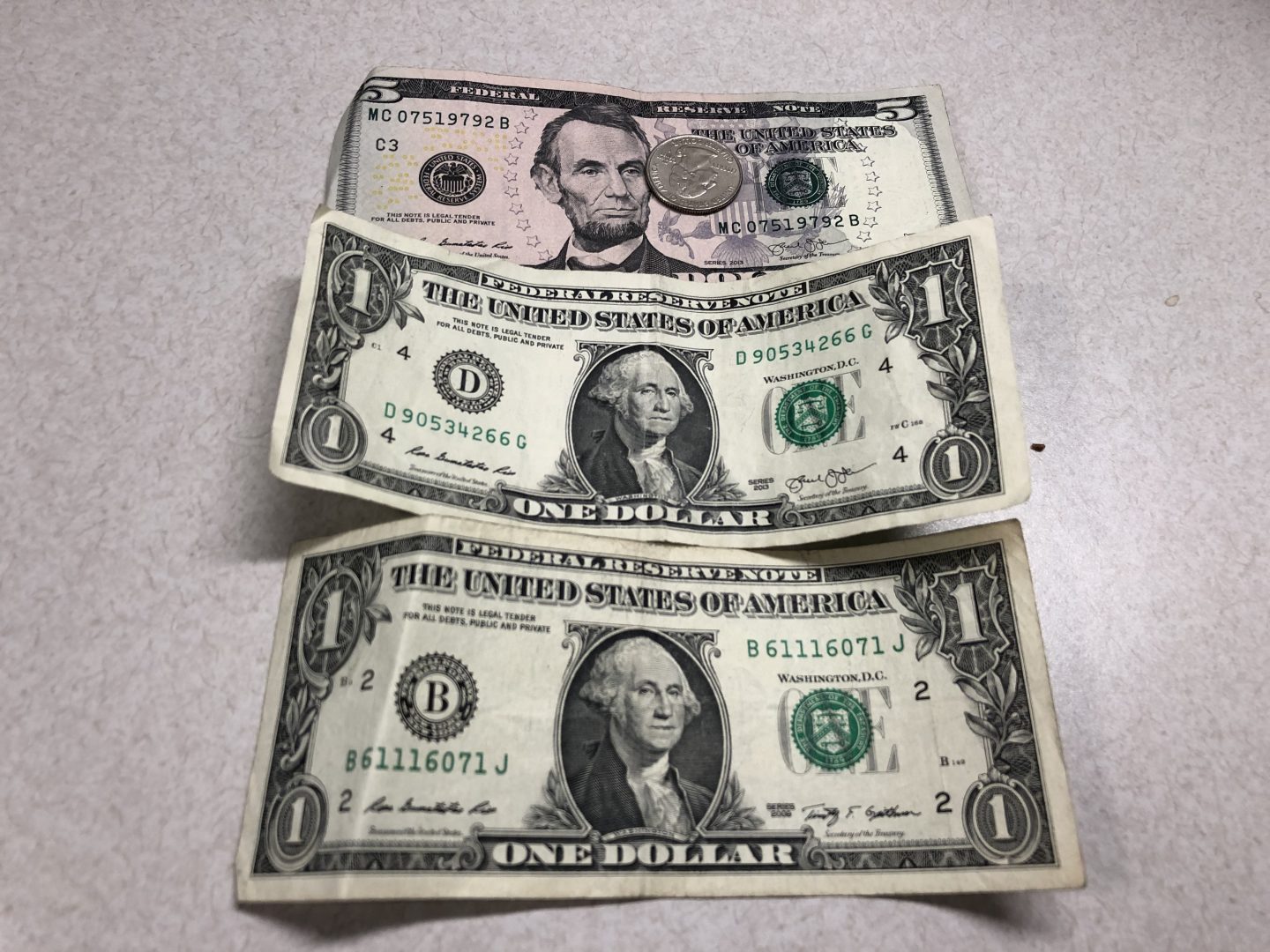 (Harrisburg) – Before departing Harrisburg for the holidays, state lawmakers sent a bill that would increase Pennsylvania’s minimum wage into what could be a legislative abyss between the House and Senate.

Right now, the least a worker in the commonwealth can make is the federal minimum $7.25 an hour. The Senate proposal would raise that to $9.50.

The chamber passed it after years of repeated, unsuccessful wage-increase proposals by Democrats, as a result of quiet horse-trading between Republican Senate leaders and Democratic Gov. Tom Wolf.

However, those negotiations may be for nothing if the House doesn’t approve the bill. Leaders haven’t indicated what they’re going to do.

When lawmakers talk about the minimum wage, they often talk about small businesses like, for instance, Elementary Coffee in Harrisburg.

Andrea Grove, who has advocated for minimum wage increases at the Capitol, started the business around five years ago, but only recently moved it outside the city’s farmer’s market.

She said as she was building it up, she kept one thing at the forefront of her financial planning: wages.

“We find ways to care for each other, one of which is raising our wages as we get more money,” she said. “It’s like, this is a community. I don’t understand why people wouldn’t want to watch out for their employees.”

At minimum, Employees at Elementary Coffee now make $12.50 an hour.

Those who oppose raising the minimum wage say not every business can afford to follow Grove’s example.

While Democrats typically argue higher pay puts money in people’s pockets and helps them get off unemployment benefits, many Republicans say businesses — especially smaller ones — would disproportionately struggle and have to lay off workers if they were required to dedicate more money to salaries.

The conservative Commonwealth Foundation has opposed a wage increase of any size. The group often highlights perspectives from, for instance, business owners in other states who say changes to wage laws mean they’re at risk of having to lay off entry-level workers.

Nathan Benefield, the foundation’s vice president, recently wrote that “any minimum wage hike will cut off access to work experience for those trying to enter or re-enter the workforce.” 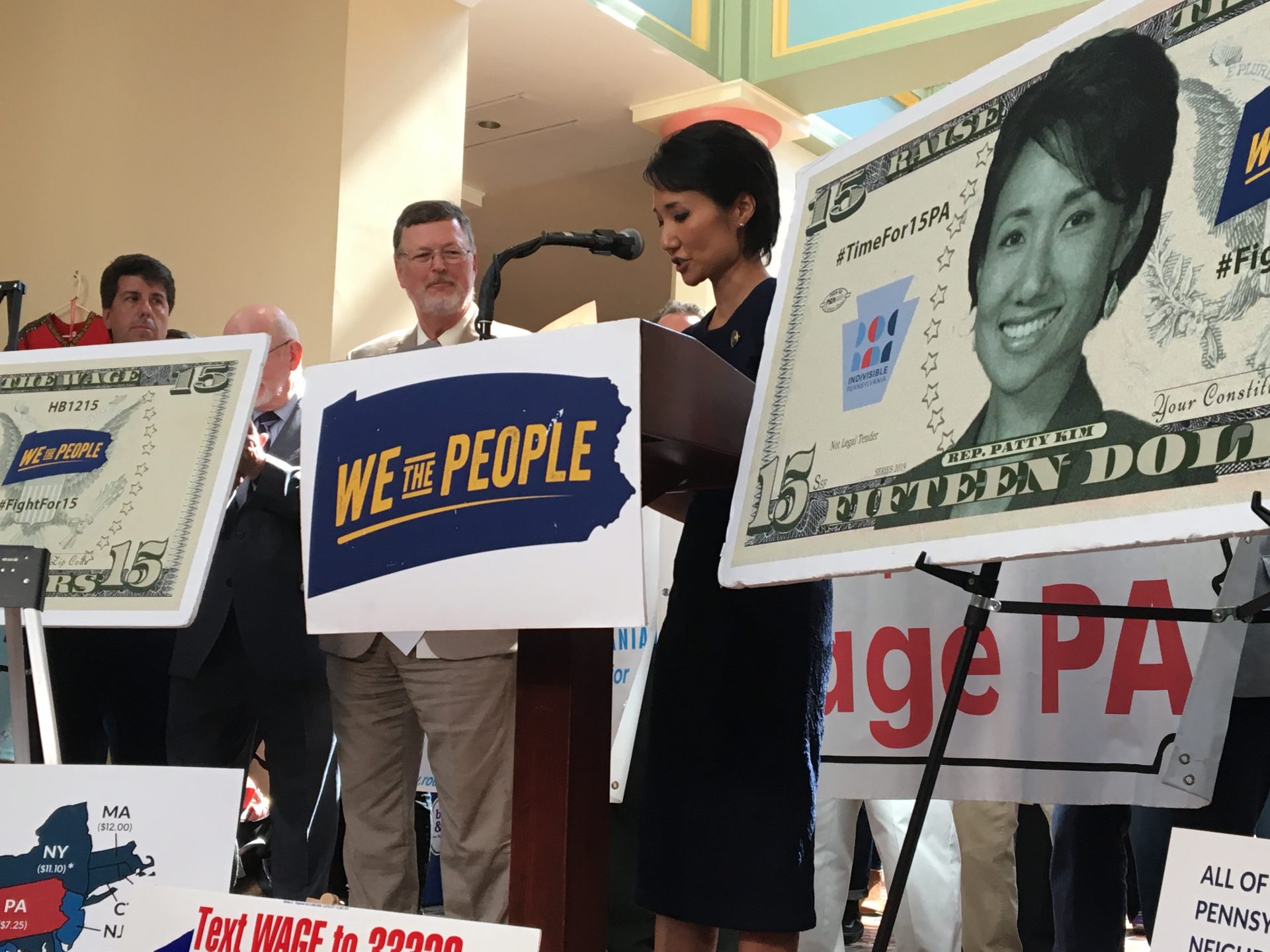 Representative Patty Kim speaks at a Sept. 17 rally for a higher minimum wage. Advocates have been using the likenesses of Kim and her co-sponsor, Representative Chris Rabb, in their lobbying effort.

Pennsylvania’s Independent Fiscal Office, which does nonpartisan studies on state finances, said in its most recent review that the actual effect would be a little of both. It looked at a $12 minimum wage.

In that scenario, 1.08 million low-wage workers would get raises directly and retain their employment, and 826,000 more people who make between $12.00 and $14.99 would also receive around a 4 percent pay increase.

The office found a smaller negative impact — 34,100 positions eliminated, and a 1- to 2-percent reduction in hours for full time workers. Analysts estimated part time workers would probably see a 2- to 4-percent reduction. They also noted that they didn’t estimate the effect a wage increase would have on worker benefits, as people who make those wages generally aren’t provided things like healthcare through their jobs.

All told, the IFO said workers who benefit from a $12 minimum wage would get an additional $3.87 billion, and those who are negatively affected would lose $363 million.

A number of Pennsylvania’s GOP lawmakers believe, like Benefield does, that the free market should regulate wages and that any increase would be unacceptable. But many have indicated they’re open to compromise.

Take Senate GOP Leader Jake Corman, who, in a speech on the Senate floor, rebuked those of his colleagues who “think compromises are a four-letter word.”

The Senate’s minimum wage deal wouldn’t have happened if Wolf hadn’t given up things he wanted in return for agreement on an increase.

He also halted his plan to expand overtime pay eligibility to people who make more than $45,500 a year, instead of the $36,000 federal threshold that’s starting in January.

Gene Barr, who heads the conservative Pennsylvania Chamber of Business and Industry, said that trade was enough for him to begrudgingly support the wage increase — a reversal that helped make the Senate compromise successful.

“Our members have looked at [Wolf’s proposed overtime expansion], and they believe that is far more damaging to business operations here than the minimum wage that was proposed here,” Barr said.

He said he worries that if the House doesn’t agree to raise the minimum wage, Wolf will go ahead with his overtime plan.

As he hurried to the chamber floor on a recent session day, GOP Majority Leader Bryan Cutler didn’t want to say much — just that the wage bill “will have to be referred to committee and we’ll treat it like any other issue.”

Cutler and his caucus aren’t the only ones who are skeptical of the Senate’s deal.

“It felt like a kick in the gut,” Kim said of the moment she realized Wolf had compromised.

Kim has sponsored multiple proposals for a $15 minimum wage. She said that’s still her goal, but added that after reflecting for a while, she has decided to settle for now.

Jim Cox, the Berks County Republican who runs the House Labor and Industry Committee, where the bill will be considered next, hasn’t commented on when — or if — he plans to bring it up for a vote.