Under current law, lawmakers can accept whatever gifts they want, no matter the cost. For the first time in recent memory, the House may be poised to change that.

(Harrisburg) — After years of pressure from advocates, leaders in Pennsylvania’s GOP-controlled state House are indicating they might be willing to substantially tighten the law governing legislative gifts.

Michael Pollack, a Philadelphia rabbi, has spent the last three years nonviolently agitating for a gift ban with the group March on Harrisburg.

He and his fellow protesters have been arrested several times—in one instance, they were blocking a hallway dressed in Where’s Waldo costumes—a dig at lawmakers who had canceled a voting day. More recently, they rained dollar bills stamped with “bribe” down on the House chamber. 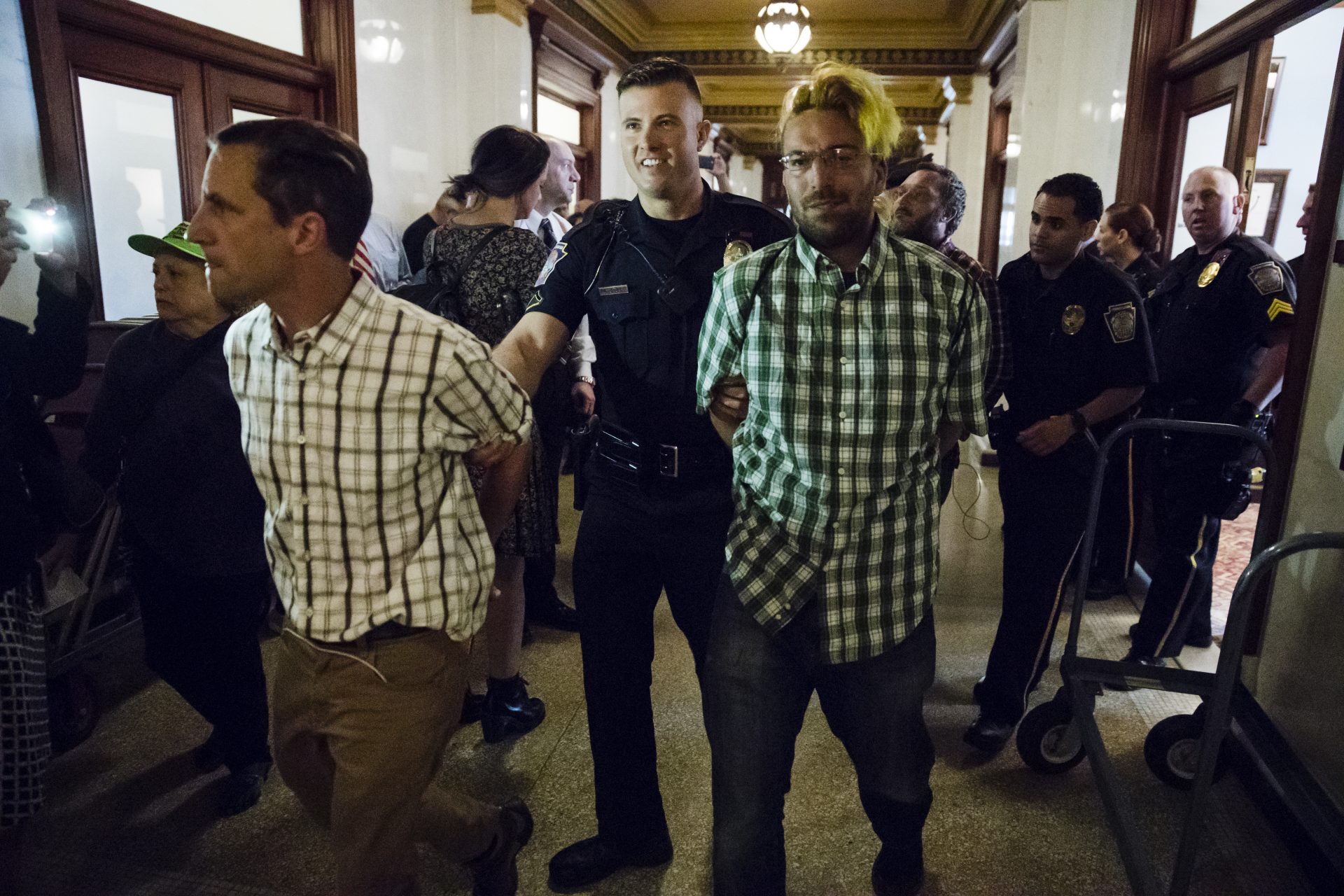 Gift ban advocates getting arrested by state Capitol police at one of their 2017 protests.

Pollack said the measure’s passage through the House State Government Committee is a huge step for his reform-minded group.

Still, he added, he thinks the bill could require small gifts to be tracked more closely.

Like-minded lawmakers, he said, plan to amend the measure “to make it a whole lot more tight around the reporting threshold.”

Those amendments will likely include “dollar-one” reporting, i.e. every gift, no matter how small, would have to be disclosed.

As-is, the bill would ban lawmakers from accepting cash and keep them from taking non-cash gifts worth more than $50 from any single person per year. It would also lower the threshold for hospitality and transportation lawmakers can accept from one person in a year—from basically unlimited, to $500.

House State Government Committee Chair Garth Everett, a Republican, said he thinks it would be too cumbersome to require lawmakers to report smaller expenses, like Pollack and others want.

“I don’t think that de minimis amounts add anything to the conversation for our constituents,” he said.

The reporting threshold isn’t the only point of contention.

The measure includes several carveouts. For instance, lawmakers would be allowed to accept things of value from friends and their parents, spouses, children, and other close relatives as long as, the bill says, “the circumstances make it clear that the motivation for the gift…was a personal or family relationship.”

There would also be an exception to a provision banning lobbyists from giving lawmakers gifts. If a lawmaker and lobbyist are involved in a “personal romantic relationship,” the lobbyist would be allowed to gift the lawmaker with hospitality, transportation or lodging.

Cash gifts wouldn’t be allowed under either of those exceptions.

Other contentious exclusions include an amendment, added Tuesday, that would let lobbyists give gifts for big life events, like weddings.

For example, he said, say a hypothetical lobbyist friend gifted him a $500 watch for his birthday.

“If I was questioned by one of my constituents, ‘Why did you take a $500 watch?’…I would say, ‘Hey, we’re friends. That’s a birthday gift. It had nothing to do with any particular piece of legislation,’” Everett said

Democratic Governor Tom Wolf didn’t comment on his preferences for the proposal, but he has imposed strict gift bans within his administration.

Top Senate Republican Jake Corman said he plans to wait for the House to pass the bill before he weighs in.