A fallen tree rests in an area of virgin spruce forest in Monongahela National Forest, W.Va., on Aug. 27, 2019. The Appalachian highlands once supported a large and unique ecosystem, dominated by red spruce forest a century and a half ago. But commercial logging in the late 1800s and later coal mining in the 20th century stripped the landscape, leaving less than a tenth of the original red spruce forests intact.

What can be saved? Taking root 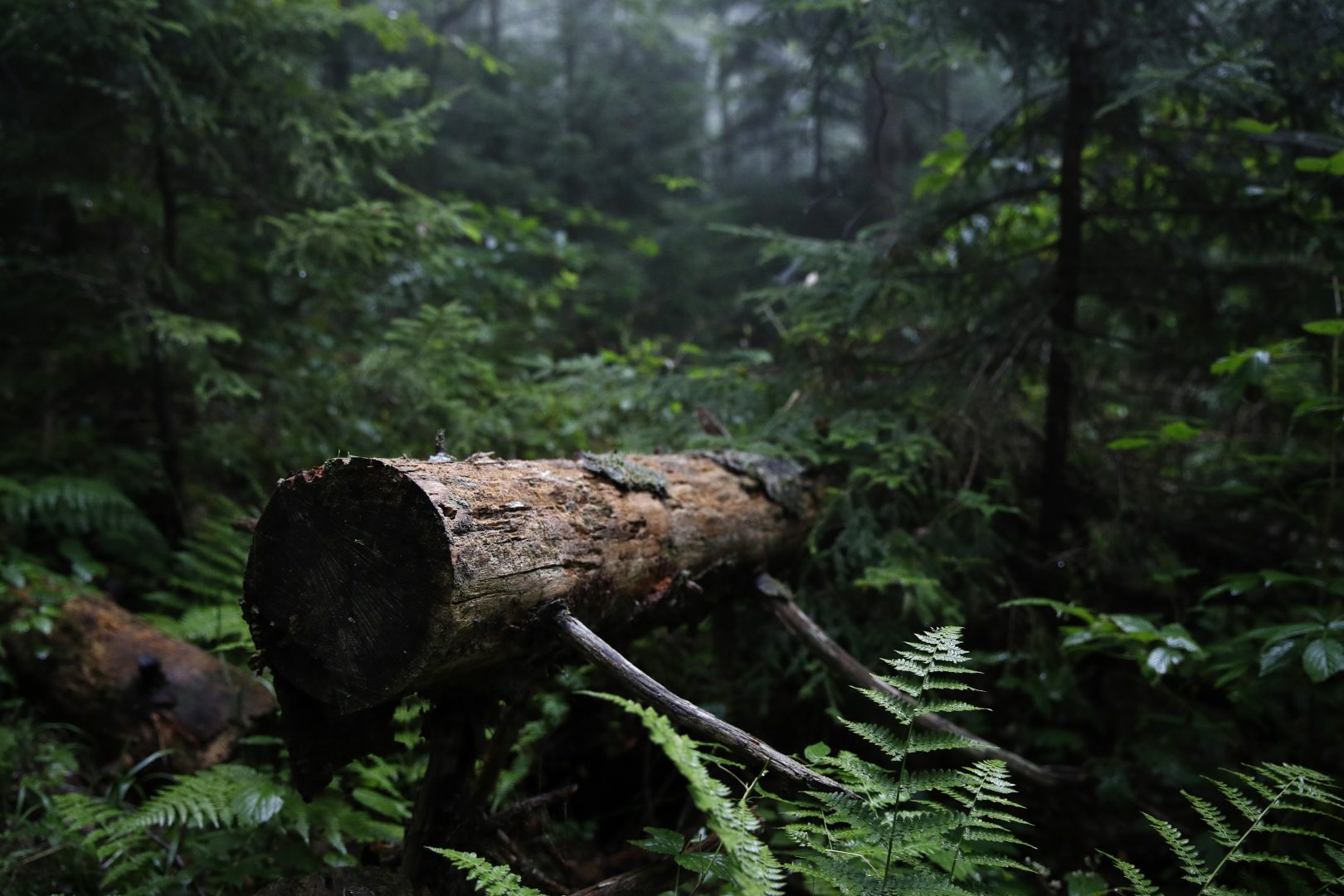 A fallen tree rests in an area of virgin spruce forest in Monongahela National Forest, W.Va., on Aug. 27, 2019. The Appalachian highlands once supported a large and unique ecosystem, dominated by red spruce forest a century and a half ago. But commercial logging in the late 1800s and later coal mining in the 20th century stripped the landscape, leaving less than a tenth of the original red spruce forests intact.

Forestry researcher Jhon Farfan carefully steered a motorcycle through the dense Peruvian jungle. He was following a narrow path cut by illegal gold miners in the heart of the Amazon, but he was not seeking treasure. Instead, he was on a quest to reforest abandoned gold mines within the world’s largest tropical forest.

“When you walk through this degraded land, it’s like being in a desert. Sadly, as someone born where, you wonder what has happened,” Farfan said as he inspected lands in a region of southeastern Peru called Madre de Dios.

To recover the gold, the floor of the jungle was turned upside down. There are no gold seams in the lowland areas of the Amazon, but only flakes of gold washed down from the Andes mountains by ancient rivers, buried beneath the soil. Left behind are patches of desert-like land — dry, sandy, stripped of topsoil and ringed by trunks of dead trees.

“Miners will use mercury to concentrate the gold in the sediments and the soils and a lot of that mercury is getting into the environment, unfortunately,” said Jimena Diaz Leiva, a graduate student at the University of California, Berkeley, who is currently doing environmental research in the area.

Last December, Farfan and other scientists with the Peru-based nonprofit CINCIA planted more than 6,000 saplings of dozens of different species native to this part of the Amazon, including the giant shihuahuaco, and tested different fertilizers. A study of former gold mines in Peru by scientists at CINCIA and Wake Forest University several years ago found that seedlings transplanted with soil were more likely to survive than “bare-root seedlings,” and the use of special fertilizers also helped growth.

Some of the trees tested had absorbed trace amounts of mercury, but it’s not clear yet how this will affect them. Since the project began three years ago, the team has planted more than 42 hectares (115 acres) with native seedlings, the largest reforestation effort in the Peruvian Amazon to date. The group is in discussion with Peru’s government to expand their efforts.

The Peru military, meanwhile, has stepped up efforts to curb illegal mining including blowing up hidden equipment. More than 3,000 miles to the north, a different type of destruction.

On former coal mining land across Appalachia, workers rip out old trees that never put down deep roots and make the soil more suitable to regrow native tree species. “I think a lot of people still think we are totally crazy with the work that we’re doing because it’s just so different than going and planting a tree,” said Shane Jones, a wildlife biologist for the Greenbrier Ranger District in West Virginia for the U.S. Forest Service.

After miners left West Virginia’s Cheat Mountain in the 1980s, there was an effort to green the coal mining sites to comply with federal law. The companies used heavy machinery to push upturned soil back into place, compacting the mountainside with bulldozers. The result was soil so packed in that rainwater couldn’t seep down, and tree roots couldn’t expand.

The Appalachian highlands once supported a large and unique ecosystem, dominated by 500,000 acres of red spruce forest a century and a half ago. But commercial logging in the late 1800s and later coal mining in the 20th century stripped the landscape, leaving less than a tenth of the red spruce forests intact. “Why in the world would you knock down a red pine tree to put in a red spruce tree? Well, red pine didn’t originally grow here and red pine doesn’t support the habitat of a lot of species that live here. Red spruce does,” said Chris Barton, a professor at the University of Kentucky and founder of Green Forests Work.

Barton and colleagues at the nonprofit are collaborating with the U.S. Forest Service to restore native Appalachian forests and the rare species they support _ by first tearing down other trees. This “deep ripping,” as it’s known, gives rainwater and tree roots a better chance to push down into the soil. 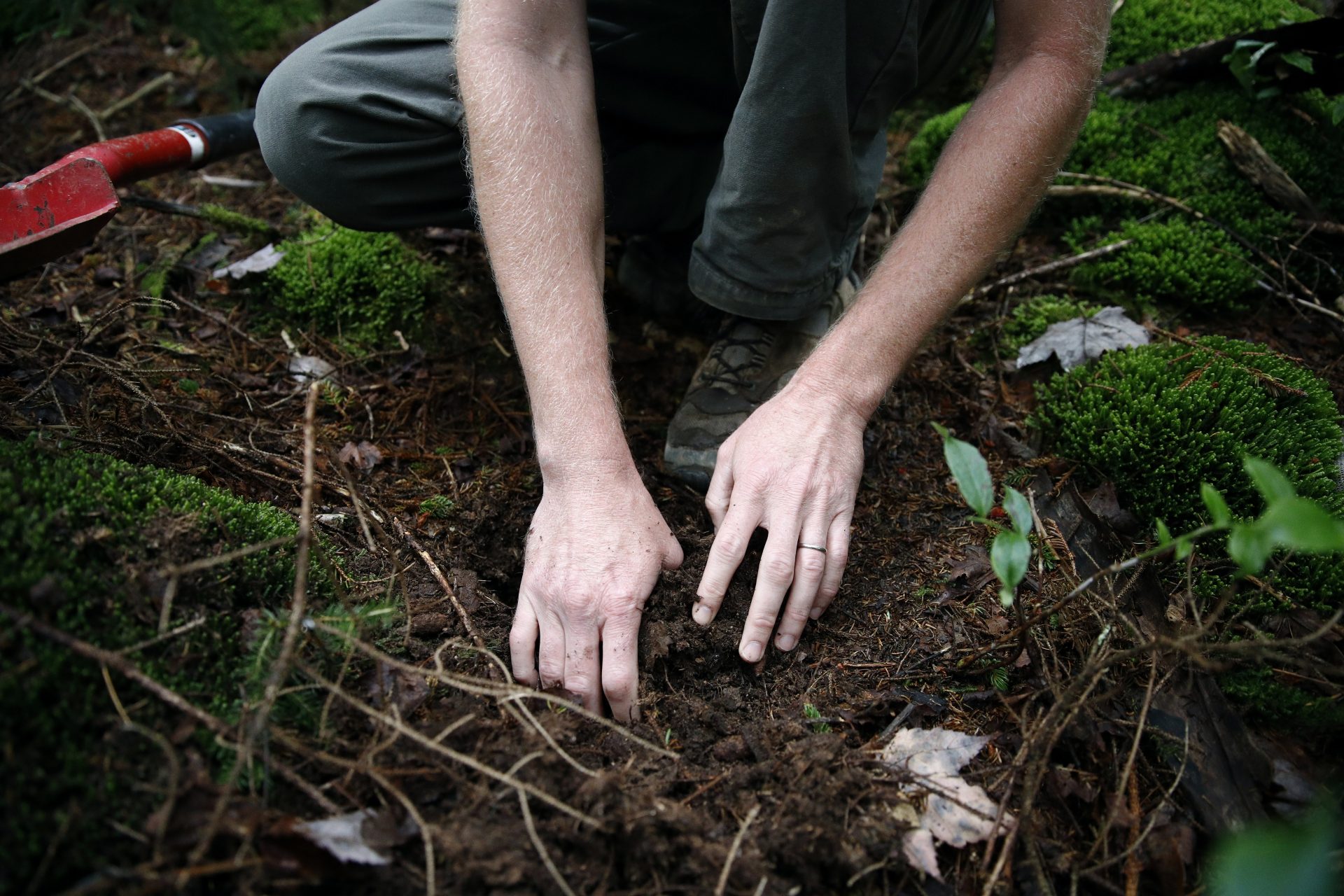 Michael French, director of operations for the nonprofit Green Forests Work, pulls up soil in an area of virgin spruce forest in Monongahela National Forest, W.Va., on Aug. 27, 2019. French and colleagues at Green Forests Work are collaborating with the U.S. Forest Service to restore native Appalachian forests and the rare species they support.

A 2008 study found that disrupting the soil on U.S. brownfield sites through this method helped tree growth. After five growing seasons, trees planted on “ripped” sites had more roots compared to those where deep ripping didn’t occur. Trees also grew taller. Green Forests Work has now reforested around 800 acres within the Monongahela National Forest, and it is taking a similar approach to other former mining sites across Appalachia, having reforested around 4,500 total acres since 2009.

The projects in the Appalachia and Amazon show how rebuilding woodland is slow and often difficult work. And it requires patience: It can take several decades or longer for forests to regrow as viable habitats, and to absorb the same amount of carbon lost when trees are cut and burned. And yet, there is urgency to that work — forests are one of the planet’s first lines of defense against climate change, absorbing as much as a quarter of manmade carbon emissions each year. As forests have shrunk, however, so has an already overloaded earth’s capacity to cope with carbon emissions.

Their ultimate goal is to restart the natural cycle of the forest — so that scientists’ work becomes invisible again. “It’s definitely a big challenge. But we’re optimistic that even if it takes long, the scars of degraded soil can be healed,” said Farfan.