In Pittsburgh, some restaurants are helping restore the Chesapeake Bay one oyster shell at a time 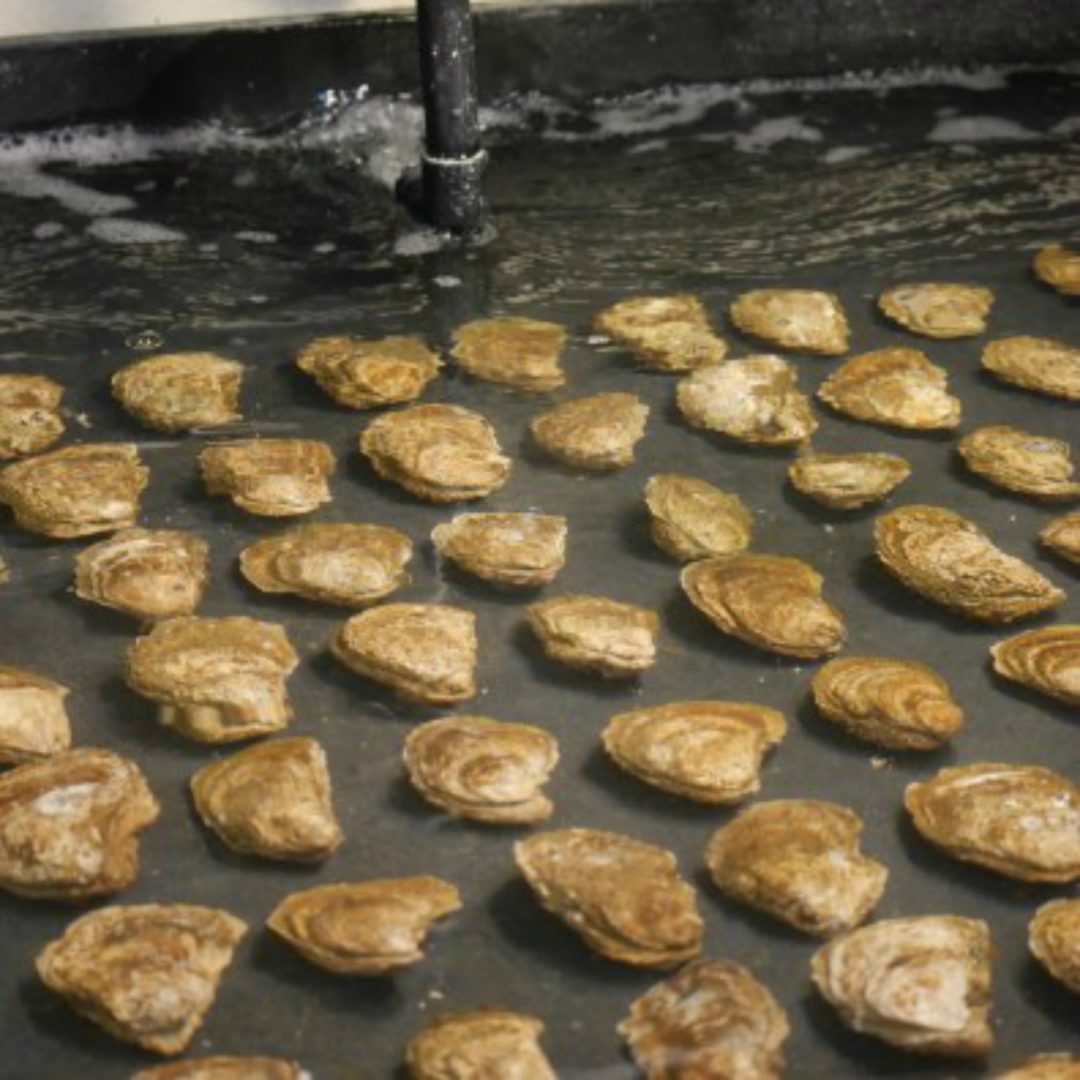 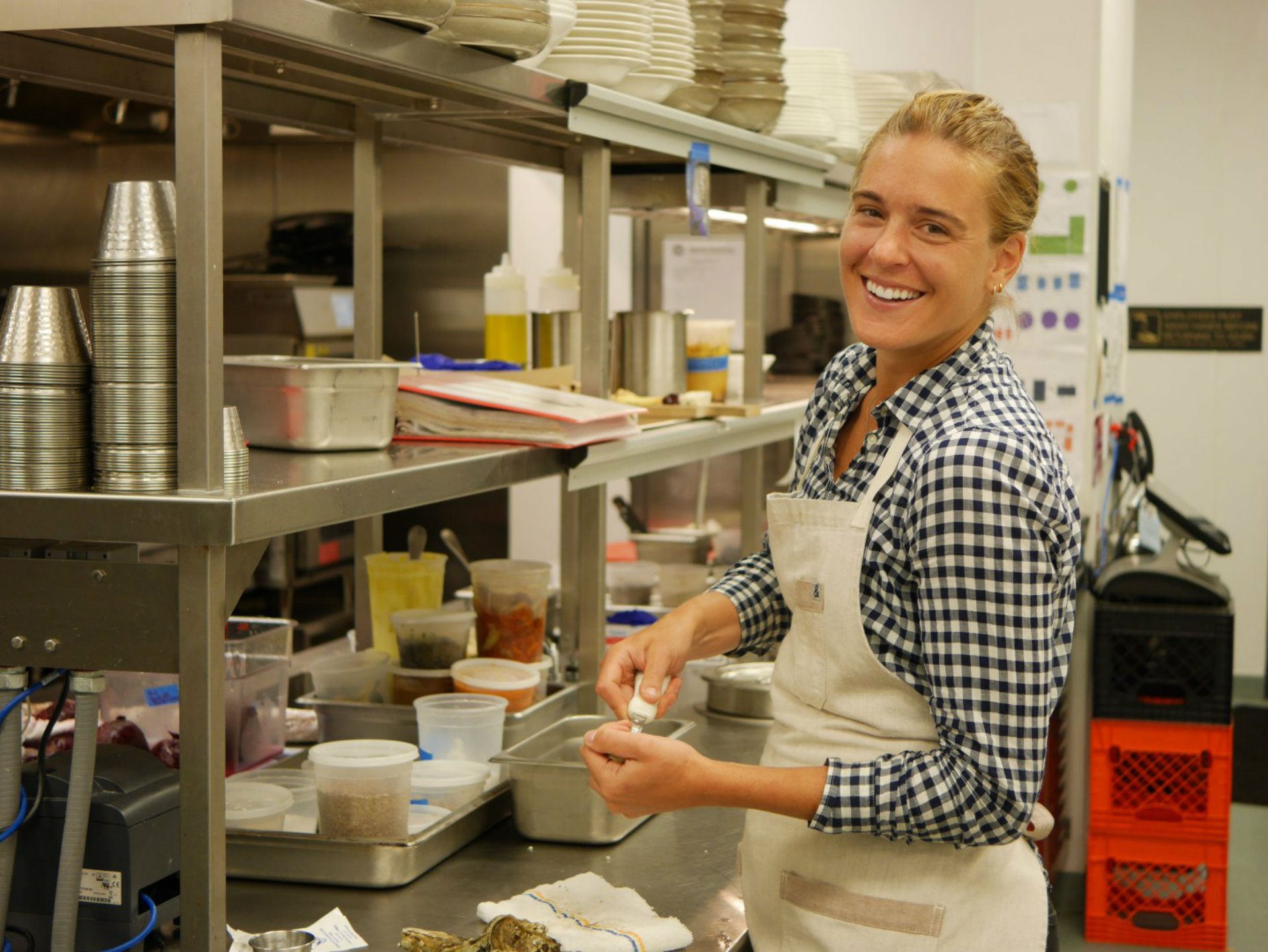 Jessica Lewis says shucking an oyster is like picking a lock.

“You can’t really muscle through it,” she said, running a small knife around the edge of a closed oyster shell. “You press down, and then you just wiggle, and pop it open.”

Lewis is the executive chef of Spirits & Tales at the Oaklander Hotel in Pittsburgh. She says the restaurant goes through 300 to 400 oysters a week, from the East and West coasts. But regardless of where they’re sourced, the top and bottom shells will end up as a part of a restoration project in the Chesapeake Bay.

Lewis and her staff toss the spent shells into a 35 gallon barrel with a screw-on lid in the trash area on the ground floor of the building. About once a month, a truck picks up the old shells from this and six other participating restaurants in Pittsburgh, and drives them more than 250 miles to a staging area just across the Chesapeake Bay Bridge in Maryland.

From there, the oyster shells from Pittsburgh, and ones collected from Maryland, Virginia and the D.C. area are taken to a site at the University of Maryland Center for Environmental Science’s Horn Point Laboratory in Cambridge, for processing.

“So here you’re looking at about 7,000 tons of clean shell,” said Karis King, with Oyster Recovery Partnership, a nonprofit that works to increase oyster numbers in the Chesapeake Bay. She’s standing at the base of a mountain of gray shells. 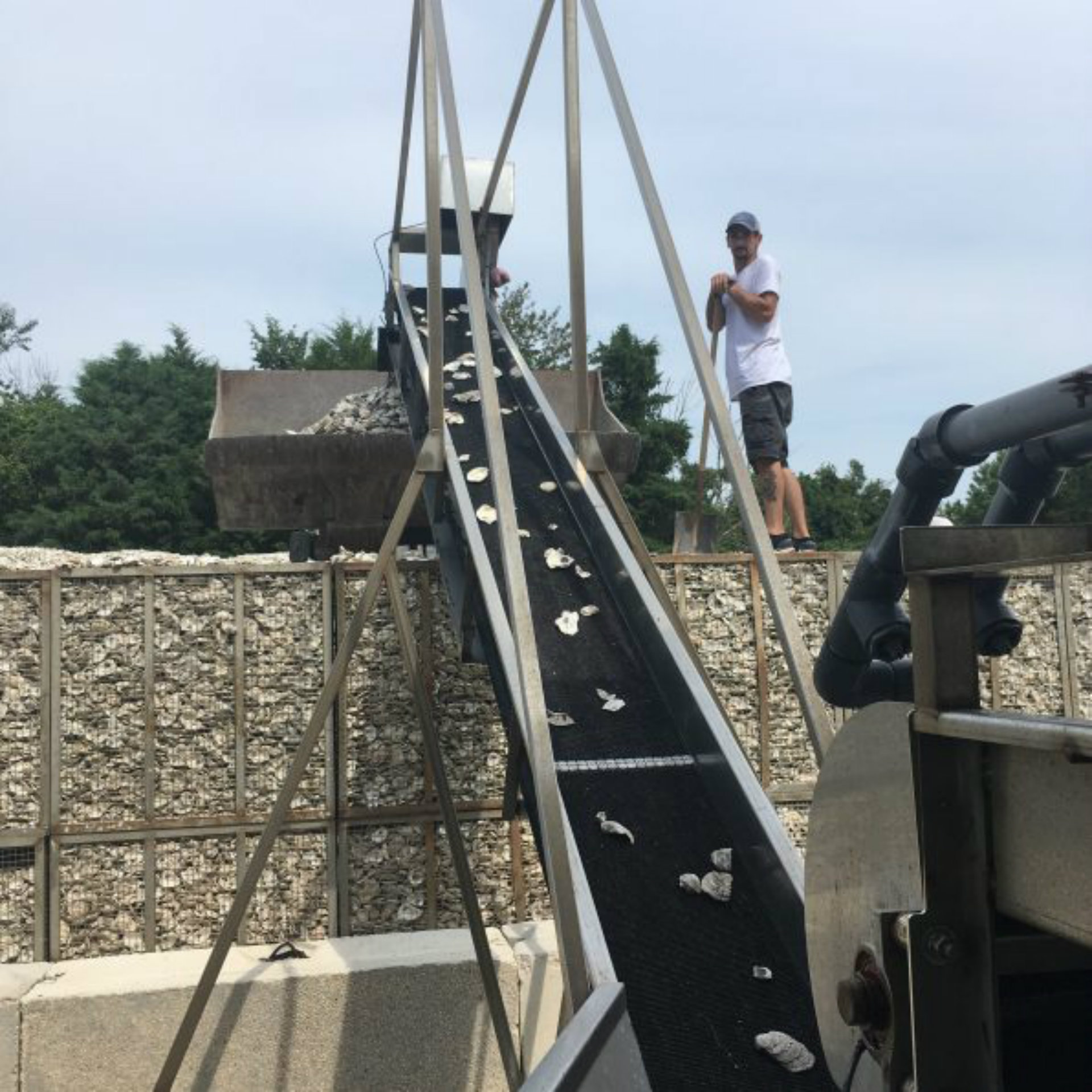 Shells will be cured for a year before being used for spat.

They’re dumped with a front loader into a machine that’s like a modified potato hopper, which helps sort the shells. While on the sorter, the shells are washed with water from the nearby Choptank River, a major tributary of the bay. Smaller fragments of broken shell fall away, as a conveyor belt deposits the half shells into wire cages or piles where they’re cured for a year.

“Even with all the shell that we do recycle, and also purchase from shucking houses, we still don’t have enough to do large scale restoration, at the rate that we could,” King said.

Nature is “out of whack”

A look back in history explains the scale of the problem, says Stephanie Alexander, manager at the Horn Point Lab oyster hatchery. 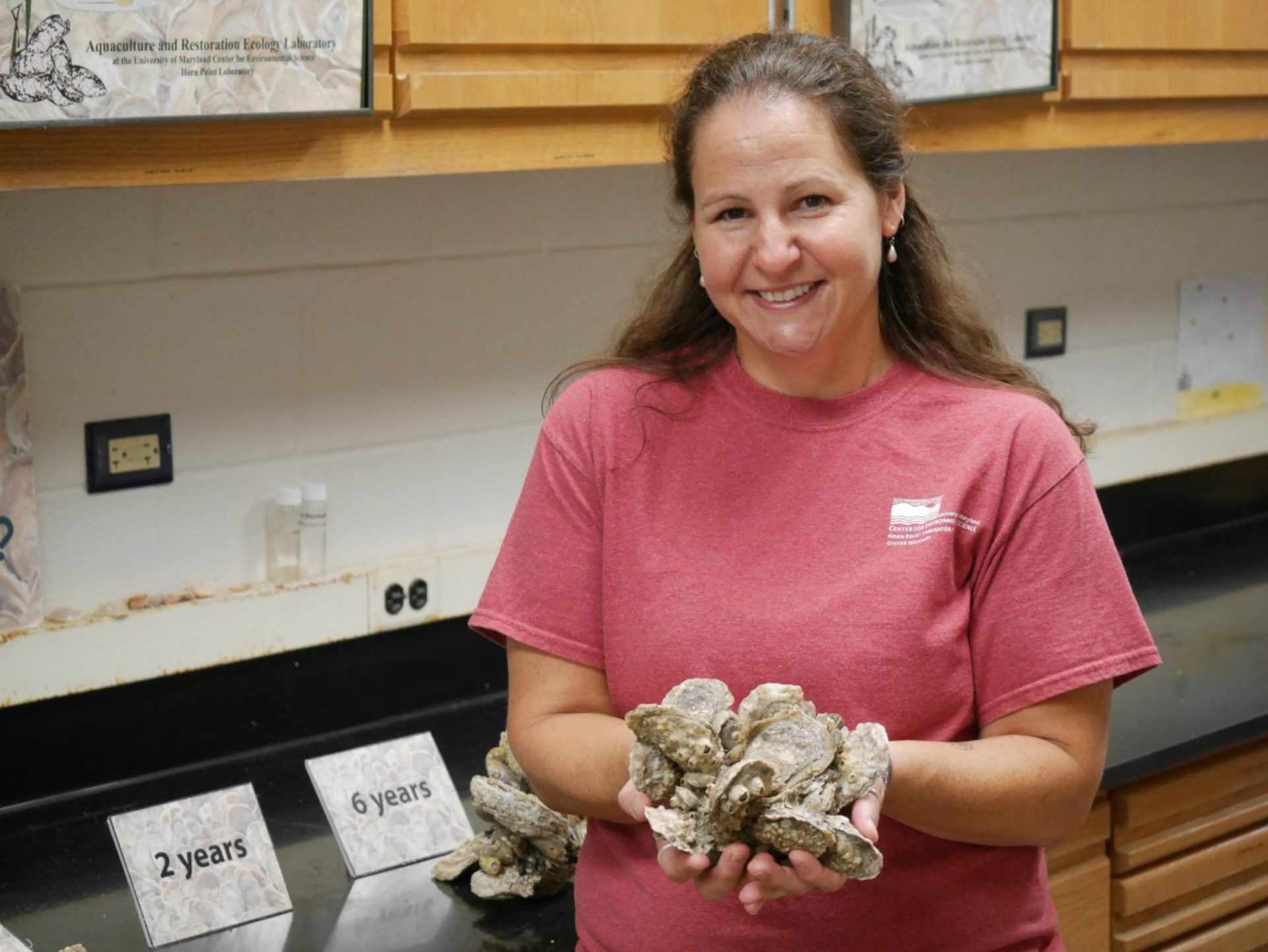 “When John Smith sailed up in the 1600s, he was running aground on oysters,” Alexander said.

That’s before these waters were overharvested, and before there was agricultural runoff and soil erosion from development.

“We’ve pretty much wiped the oyster out to less than one percent of historic levels,” she said. “So we started this restoration effort where we’re using a hatchery to produce spat on shell to put back into the bay, so we can kind of help jump start Mother Nature.”

The concept is pretty simple: Scientists here at the lab produce baby oysters from adults harvested from the bay, nurture the microscopic larvae with a custom algae diet, then get them to attach to the recycled, treated oyster shells. That’s the “spat on shell.”

It’s a lot harder than it sounds. Even in the lab, with its high-tech tanks, instruments and network of pipes, nature is in charge.

Alexander says it was a slow summer for the project. Increased rainfall caused a drop in salinity in the bay, stressing the adult oysters, and making them less likely to spawn, or produce eggs and sperm.

The water in the bay is also warming, which could make it harder for the the spat on shell they release to grow a second shell, and over the years, form the clusters that create oyster reefs.

“When one thing gets out of whack, everything else is going to kind of follow,” Alexander said. “So we’re trying to get the oysters back into balance, so then, hopefully, everything else will follow.”

Vacuum cleaners of the bay

Over the last two decades, the lab and Oyster Recovery Partnership have planted 8 billion oysters on the bottom of the Chesapeake Bay and its tributaries, with the help of other partners like the Maryland Department of Natural Resources and the U.S. Army Corps of Engineers. Throughout the summer spat on shell are released from a boat on sites where they’re most likely to survive. Alexander says that’s critical.

“Oysters are the vacuum cleaners, or the kidneys, of the bay,” she said. “They just suck the water in. They decide if it’s food or not food. But no matter what it is, they remove it from the water column, and that’s how they clean it.”

Because of this superpower, oyster aquaculture is a best management practice identified by the regional partnership that oversees cleaning up the Chesapeake Bay.

Some of the spat raised at the Horn Point Lab will make its way to oyster farmers, and those are the “oysters on the half shell” that are served in restaurants. But the majority of the spat will help rebuild oyster reefs, creating habitat for fish, and restoring the ecosystem. 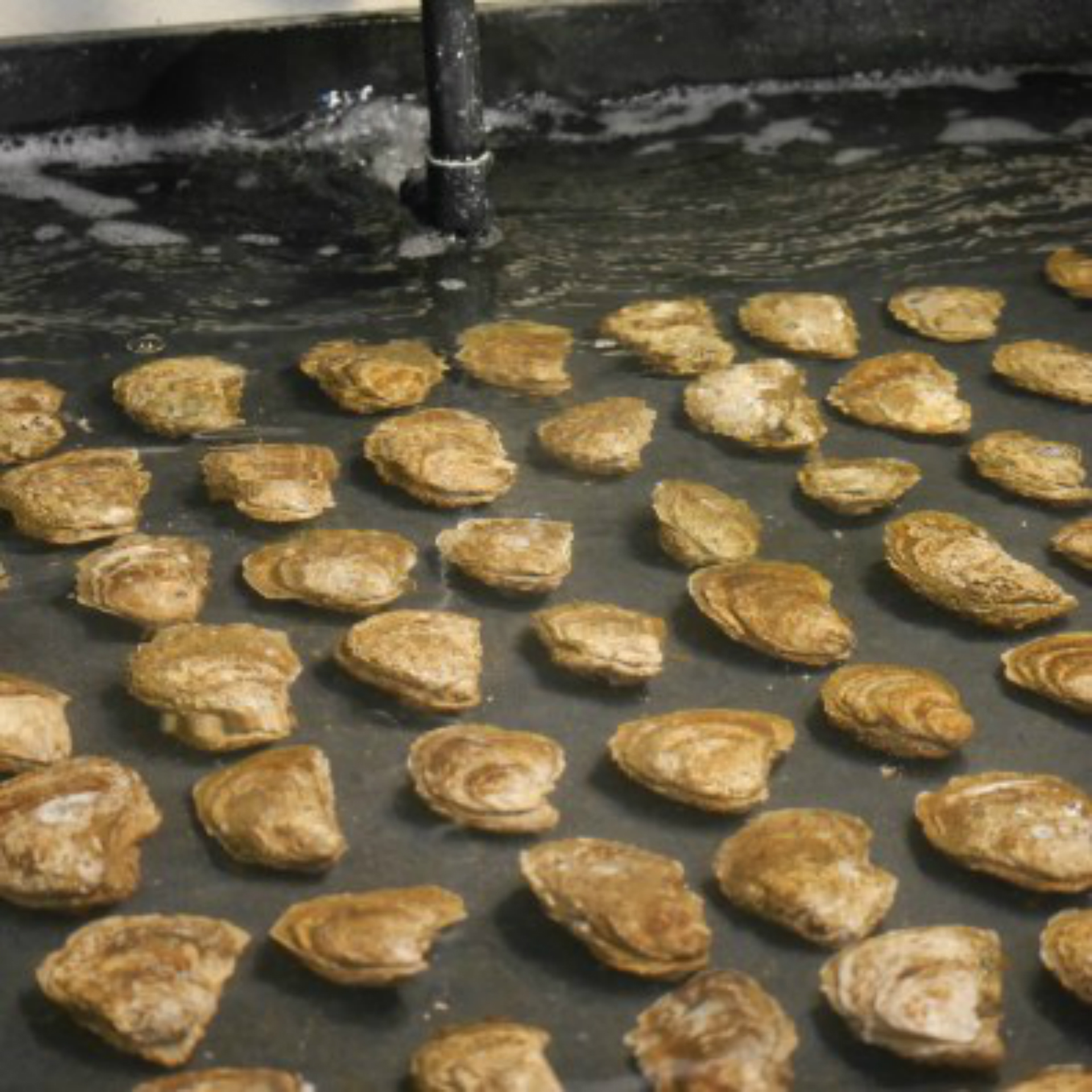 “We did something good.”

Half of the land area of Pennsylvania drains into the Chesapeake Bay, and that includes a lot of pollution from agricultural runoff, like nitrogen. It’s a factor in the formation of dead zones in the bay. Recently, the commonwealth has come under fire from Maryland’s governor for not investing enough money to help clean up the Chesapeake.

Back in Pittsburgh, Jessica Lewis is educating diners and trying to convince other Pittsburgh restaurants to join the oyster shell recycling effort that feeds the conservation work. She hopes they’ll see the value in giving back.

“With climate change, and all those scary things, it’s like a bright light shining through–that we did something good,” she said.

Her pitch: Every shell counts.

This story is part of The Allegheny Front’s series, Wild Pennsylvania, which is funded by the Richard King Mellon Foundation. To check out other stories in the series, click here.

An Erie biology professor felt like he couldn't control what's happening in Washington. Then he led a campaign against a polluting coke plant in his community