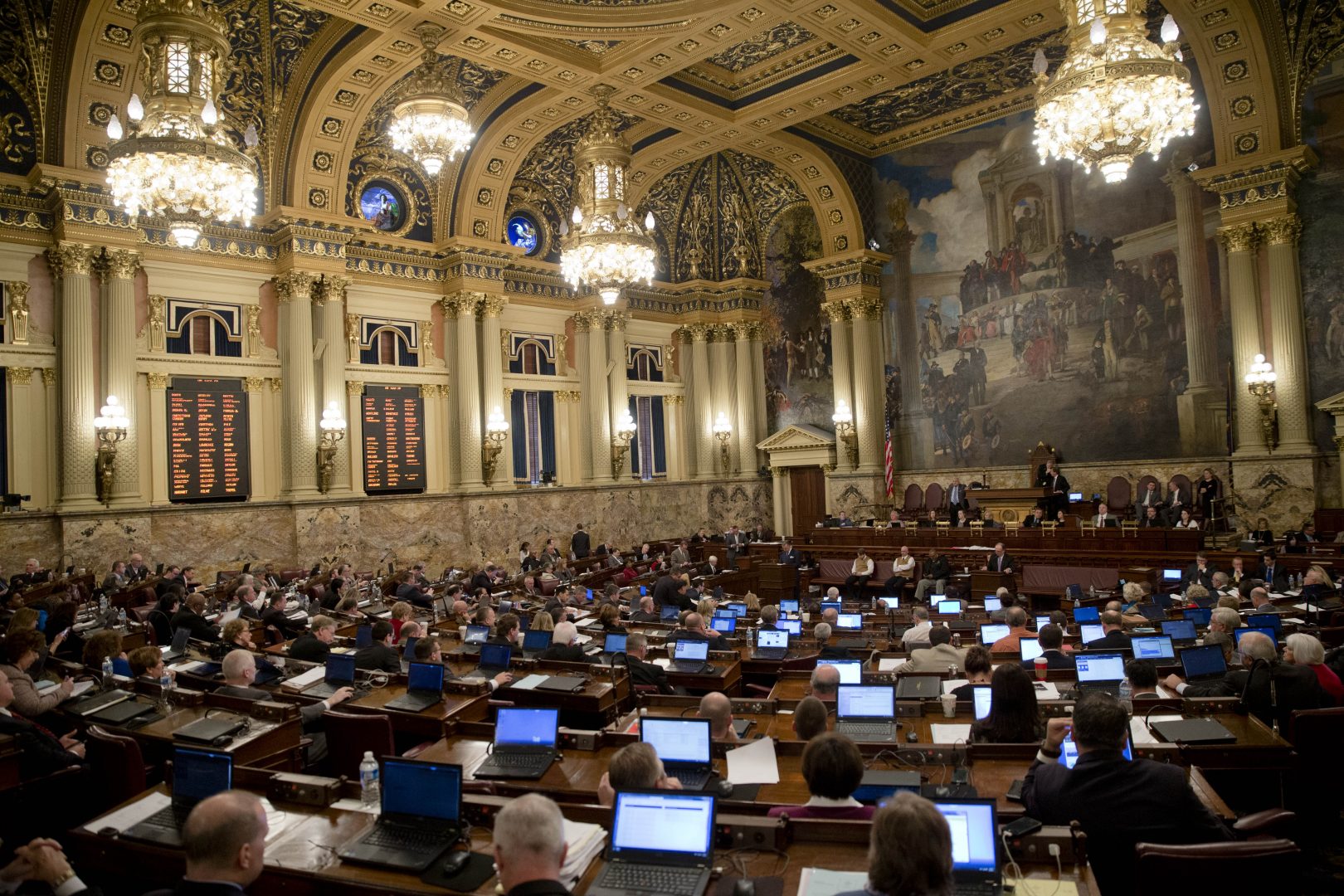 He came down against what’s commonly called a “red flag” bill on Tuesday—much to the surprise of some lawmakers in his own party.

The comments came at the end of a hearing on a raft of 12 gun bills.

If you’ve been following PA’s ongoing fights over gun restrictions, I’d recommend watching today’s House Judiciary Cmte meeting. They’re passing a big slate of bills, some of which may loosen gun restrictions, and none of which are particular priorities for gun control advocates. pic.twitter.com/E77MB9vBXm

Many of the measures were controversial—like a bill preempting cities’ gun restriction ordinances. Several others had bipartisan support, like one requiring people in inpatient mental health care give up guns more quickly.

But Tim Briggs, the Democratic committee chair, said he feels those were just political cover.

“There’s a number of bills I think we could be taking up sooner,” he said. “We’re ignoring a lot of, I think, bills that the public wants us to be tackling.”

Gun control advocates have lately focused their support on a measure that would let family members request a court temporarily take weapons from a person who may be dangerous or suicidal. That person would get an expedited hearing before a judge, and could have their firearms seized for three months to a year.

The legislation would grant police a search warrant to take a person’s guns if there’s probable cause they haven’t been relinquished.

The so-called extreme risk protection bill—often referred to as a “red flag” bill, has garnered support from both Republicans and Democrats, and 17 other states have passed similar measures.

But, echoing a concern a number of Republicans have raised in the past, House Judiciary Chair Rob Kauffman said he thinks it violates due process.

“We will not be considering ‘red flag’ in the House Judiciary Committee so long as Chairman Kauffman is chairman,” he told reporters.

In fact, he said he doesn’t have “any intention of bringing further gun bills before the committee” this year.

The Judiciary Committees in both chambers typically must approve nearly all legislation related to guns. The House Judiciary Committee debates a slate of gun bills on Tuesday, September 24.

Kauffman said he believes his own bill—the one requiring involuntary mental health inpatients to give up guns within 48 hours, instead of 60 days post-discharge—that passed the committee Tuesday with bipartisan support “negates” much of the reason for ‘red flag.’”

Kauffman and his fellow Second Amendment-focused Republicans aren’t the only ones who have raised due process concerns about the extreme risk bill.

The state chapter of the American Civil Liberties Union first flagged the measure when it was initially introduced last legislative session.

She said they were able to settle concerns about extreme risk protection order recipients being able to appeal judges’ rulings, and giving recipients a written decision explaining judges’ rationale. The ACLU is now neutral on the legislation.

Asked whether the ACLU’s acceptance affects his thinking, Kauffman said, emphatically, it does not.

“Maybe they sold out,” he said.

Stephens, who sits on Kauffman’s Judiciary Committee and had several unrelated gun bills pass on Tuesday, said he was taken aback by the chair’s sudden opposition to his extreme risk measure.

“That’s unfortunate,” he said after the meeting.

He added he is “hopeful that the information that is gleaned from the Senate hearings [that are being held this week on various gun-related proposals] helps people better understand the benefits Pennsylvania could receive and the lives that could be saved in Pennsylvania from a ‘red flag’ law.”

Pro-gun control groups in and outside Pennsylvania also voiced their dismay with Kauffman’s decision.

One of those was the group Giffords, founded by former Arizona Congresswoman Gabrielle Giffords, who was shot in the head in 2011.

In a statement, the organization’s state legislative director said Kauffman’s “refusal to act while Pennsylvanians worry about gunfire in their communities is reprehensible, and it’s time the House Judiciary Committee is led by a chairman who puts Pennsylvania families first and isn’t afraid to fight for lifesaving laws.”

If Kauffman doesn’t shift in his refusal to bring up Stephens’ bill, it is essentially a death knell for the initiative during this legislative session—with one potential exception.

If a committee chair refuses to act on a bill that many other members of the chamber support, those members can initiate a process known as a discharge resolution, in which the full body must vote to override the chair’s decision.

The maneuver is rare, and is even more rarely effective. Stephens said he thinks any consideration of a discharge is “premature right now,” noting he’d like to wait to see how Senate hearings play out.

Luzerne County Senator Lisa Baker, who is helming those hearings in her chamber’s Judiciary Committee, said after a day of testimony from various groups, she is still forming her position on extreme risk protection bills.

“I’d like to hear some additional testimony,” she said. “I haven’t made a decision yet.”

The committee will hear one more day of testimony Wednesday.

Meanwhile, the slate of bills that passed the House Judiciary Committee are headed to the full GOP-controlled chamber, where they will likely see robust debate and eventual approval.

One of the more contentious among them is the measure that would override cities’ individual gun ordinances in favor of uniform laws statewide.

The other bills that saw the most debate were a trio, sponsored by Stephens, that would reinstate the commonwealth’s mandatory minimum sentencing laws for certain gun crimes. Mandatory minimum laws for a number of gun and drug crimes were ruled unconstitutional in 2015.

The Judiciary Committee also moved several bills that saw less heated debate. Along with Kauffman’s involuntary commitment bill, members approved ones that would clarify taser laws and laws governing transporting guns in cars, among others.

Ahead of the meeting, Governor Wolf had released a statement saying he was “disappointed” the committee wouldn’t be taking up bills favored by gun control groups, particularly the “red flag” measure.

After Kauffman’s comments on the bill, Wolf released a stronger statement, saying he is “extremely frustrated today that the House Judiciary Chairman pledged not to allow votes on any additional bipartisan commonsense gun safety priorities,” and that as “citizens across Pennsylvania demand gun safety action, the chairman is going in the opposite direction.”

He added, he opposes “any attempt to weaken or dismantle state and local gun safety provisions,” and plans to veto House Bill 1066, which would preempt local gun ordinances.

This story has been updated to include a comment from the group Giffords.