Donna Ancypa Holmes uses a manual wheelchair but gets some extra power from a SmartDrive, an electric device that hooks onto the back of her chair. It’s one of a few examples of existing technology that could create more mobility options. 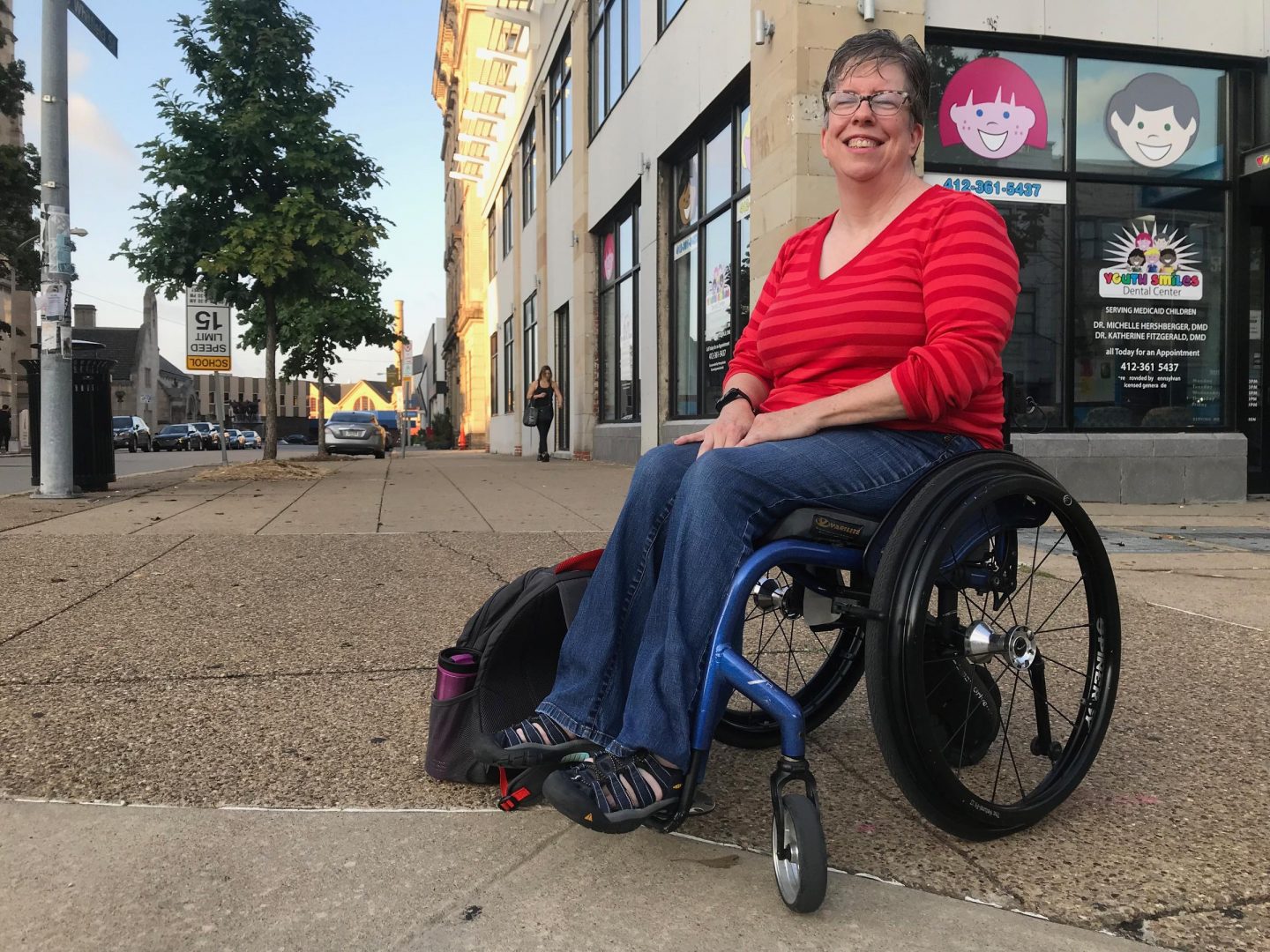 Donna Ancypa Holmes uses a manual wheelchair but gets some extra power from a SmartDrive, an electric device that hooks onto the back of her chair. It’s one of a few examples of existing technology that could create more mobility options.

(Pittsburgh) — How we get from one place to another can have a big impact on our lives. Conjure up the feeling of sitting in a hot car, stuck in gridlock, and compare it to taking a short bike ride to work or to meet a friend.

It may not seem like a big deal, but the difference between the two can lead to a noticeable shift in mood. It may also help explain the meteoric rise of micromobility.

Cities around the world have begun to reevaluate the preeminence of the car as residents and officials look to the future. Urban population growth, concerns about climate change, and the desire to promote walkable, active spaces has allowed planners the license to rethink how streets are designed and used.

Simultaneously, smaller, personal alternatives for travel have sprung up, from bikeshare programs to fleets of electric scooters. Grouped under the broad heading of “micromobility,” these new modes are fundamentally reshaping how people get where they need to go. In 2018 alone, people completed more than 84 million trips on shared bikes and scooters. Major companies such as Google’s parent company Alphabet, Uber and Lyft have joined the fray, as has legacy mobility company Ford. While Pittsburgh intentionally kept out most of these transportation newcomers, the city is home to a growing bikeshare program, as well as a ride-on scooter service that’s available seasonally.

Though still in relative infancy, micromobility is fundamentally reshaping how people get where they need to go. But only for some people. Despite billions of dollars in investment and an unprecedented adoption rate, the micromobility revolution in the U.S. largely misses a whole group of consumers.

On a recent weekday morning, the corner of Forbes and Murray avenues in Pittsburgh’s Squirrel Hill neighborhood was hopping: cars honked, buses ground to a halt to collect riders, the walk sign at a four-way intersection chirped, and Mark Castello unlocked one of this city’s micromobility options — a Healthy Ride bike — for Nasreen Hashmie so they could take a ride together.

“And it’s like $2 for half-an-hour,” added Castello. “Which, in terms of entertainment … it’s kind of a good deal.”

Fun is not just a pleasant byproduct of micromobility but a critical part of its growth and success, according to a January analysis from consulting firm McKinsey and Company. Since 2015, the industry has attracted more than $5 billion of investment. Like car-sharing or ride-hailing, the bikes and scooters of the world offer convenience and utility. But the report notes the key may be something else entirely: “…they appear to make people happy.”

Despite the flurry of innovation in micromobility, options tailored for people with disabilities have yet to materialize in a similarly widespread way.

‘The least spontaneous person in the room’

Donna Ancypa Holmes would love to scoot to and from work or bike along a trail with friends, but she uses a manual wheelchair.

“If you want to be the least spontaneous person in the room, have a disability, because you have to be prepared to think about logistics when other people are not thinking about them,” she said. “When I first saw the SmartDrive I thought, ‘I can go where I want to go.’”

Created by MAX Mobility, the SmartDrive weighs in at 12.5 pounds (“It’s about the size of a very large cat,” Holmes said with a laugh) and attaches to the back of her chair. An electric wheel rests on the surface below her and can travel up to 5 miles per hour. The FDA-approved device requires a prescription from a doctor or therapist, and sells for north of $6,000. Luckily, Holmes’ insurance paid for the device. She loves it.

“But it’s a tool,” she said. “It’s not super fun. It’s not very sexy and it makes me think a lot about how I’m not a consumer to a lot of the companies that offer these products like scooters and Segways and stuff like that.”

Four of the country’s five major electric scooter companies did not comment for this story. A spokesperson for Uber, which owns Jump, wrote in an email the organization has no plans for “add-ons of this nature for now.”

For new companies just trying to establish a business in a competitive industry, it makes sense to target young people without disabilities, said Dr. Rory Cooper. He directs the Human Engineering Research Laboratories at the University of Pittsburgh, which works to improve the mobility of people with disabilities.

“But at some point, you know, you saturate your market, and you’ve got to look at other alternatives in order to expand,” he said. “Which means providing devices where you don’t need to have the balance and the control to stand on a scooter.”

Cooper said it would be interesting to see adaptive devices for rent in the United States, in the vein of some European countries, where micromobility options for those with disabilities have begun to proliferate. Stateside, both Portland, Ore. and Detroit, Mich. conducted pilots in which accessible options, such as handcycles and recumbent bikes, were added to the cities’ bikeshare systems.

Cooper described such an effort as “social testing,” a way to create greater acceptance of all forms of mobility. There’s a likely parallel with the Americans with Disabilities Act, he said. The law requires municipalities to install curb cuts, a gradual slope from a sidewalk to the street.

“People said, ‘I don’t see why we have to spend the money, I don’t ever see wheelchair users,’” Cooper recalled. “Once they were installed, not only did wheelchair users go outside, they made it easier for small children, baby strollers, delivery people with dollies.”

That’s the potential embodied by the concept of universal design, which promotes creation of environments that can be accessed and used to the greatest extent by the most number of people: both intended and unintended audiences benefit.

Some 65 million people worldwide require a wheelchair, according to the World Health Organization. To provide new mobility options for those users and others with disabilities presents a huge opportunity, said Alex Hunt, chief operations officer for Rio Mobility. The Berkeley, Calif.-based company makes the Firefly, a fully electric attachment that converts manual wheelchairs into three-wheeled scooters. For now, Hunt doesn’t care to seek FDA approval, as getting into the insurance-approved market can be expensive and time-consuming. The Firefly sells for about $2,300 and has a top speed that rivals that of standing electric scooters, about 12 miles per hour.

“The demand grows every year,” he said. “The company is viable, we’re moving into different parts of the world.”

‘The environment around me’

To explain what gap Rio Mobility fills in the market, Hunt introduced me to one of his customers, Kathryn Sorenson. She’s a professor at the University of North Carolina at Chapel Hill and uses a manual wheelchair. She came across a promotional video for the Firefly on Facebook late one night a few months ago, and said it gave her a jolt.

“It was just the image of being free,” she said. “I could get around pain-free and not have to worry, ‘Can I get up this hill? ‘Can I make it to this meeting because it’s not easy to drive to?’”

Since buying one in June, Sorenson said the Firefly has changed her life. For the first time in her life she can drink a cup of coffee on her way to class. She said it’s a common assumption that people with disabilities just can’t do things.

“The most limiting part of my disability is not my actual body but the environment around me,” she said. “People with disabilities are people first. We want to participate and we can participate in life, we just might have to do it differently.”

Currently, there’s no research to gauge exactly what the demand is for accessible micromobility options. Cooper, of Pittsburgh’s Human Engineering Research Laboratories, said the funding for that kind of research just doesn’t exist yet.

At some point, everyone will experience disability, whether through injury, pregnancy, or the unavoidable advance of age, both Sorenson and Holmes noted. They say all people deserve to have choices, to have fun, and they’d gladly pay for services that provide both.