Al Duncan of Malvern, a member of the Chester County Vietnam Veterans of America, salutes after placing the remains of Eugene Gorski in a niche at Washington Crossing National Cemetery.

“I don’t think anybody belongs on a shelf in the morgue,” said reporter James McGinnis. 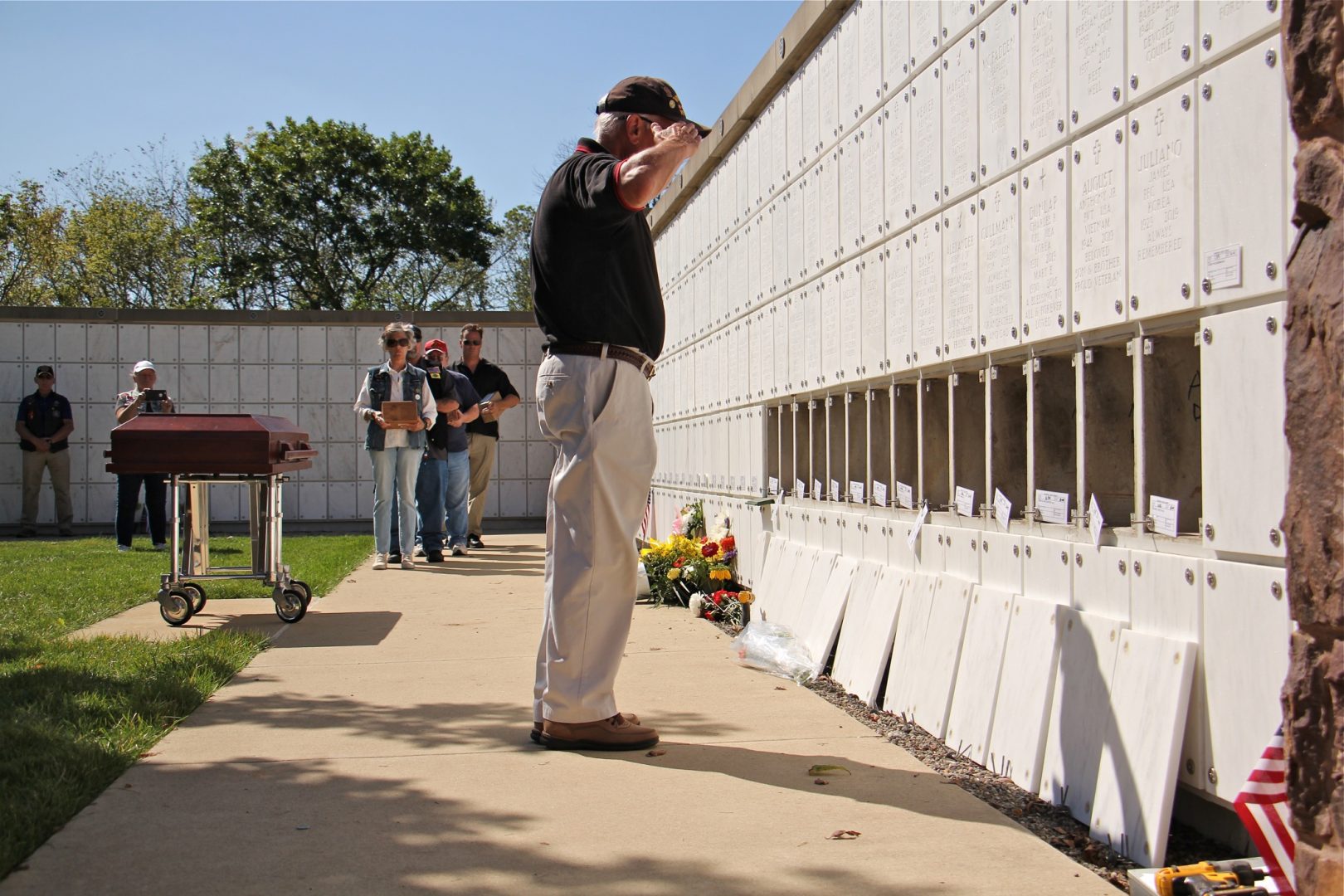 Al Duncan of Malvern, a member of the Chester County Vietnam Veterans of America, salutes after placing the remains of Eugene Gorski in a niche at Washington Crossing National Cemetery.

On the last Thursday of every month, Washington Crossing National Cemetery in Bucks County performs military burials for veterans whose remains were never claimed by family and often left on a coroner’s shelf.

This service for the “unattended” started almost a decade ago and includes the customary bugle, a color guard and three volleys of rifle fire.

The ceremony Thursday honoring 14 veterans, brought together people from all over the region striving to ensure those who served don’t remain unclaimed. From motorcycle biker groups Warriors’ Watch and Patriot Guard to members of the Disabled American Veterans to a local member of Congress, about 100 people helped mark their service, even if they had never met the deceased. 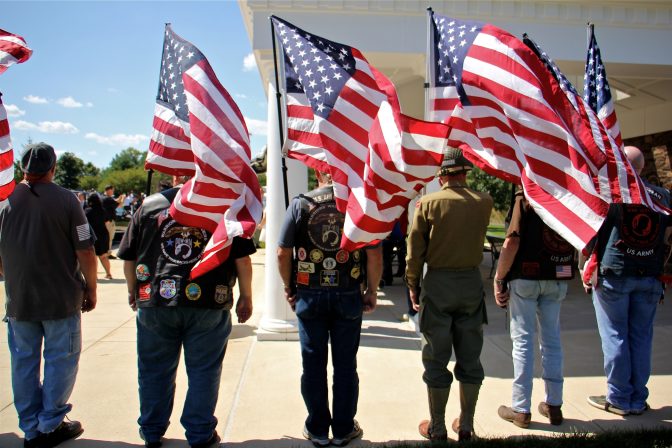 Members of the Warriors’ Watch Riders carry American flags during a burial ceremony for fourteen veterans whose remains were unclaimed. 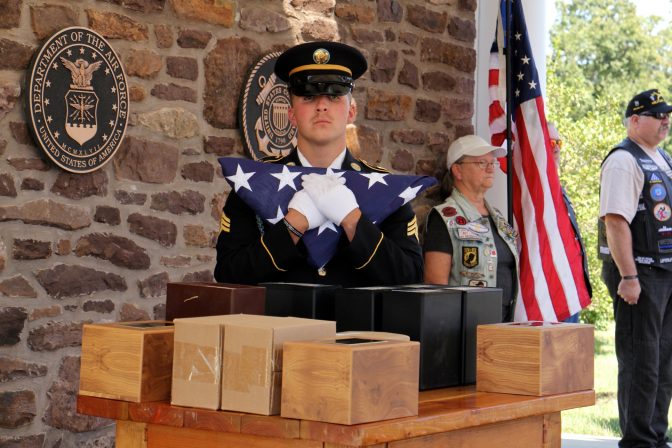 An Army National Guard soldier stands behind the cremated remains of 14 veterans who died whose remains were unclaimed. 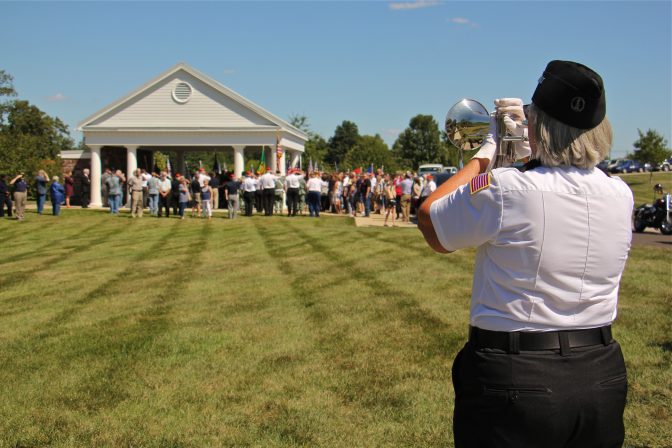 A bugler plays taps to end the funeral ceremony for 14 veterans who died unattended. The service took place at Washington Crossing National Cemetery in Newtown, Pa.

Carol Shelby Ford is a Vietnam-era vet in Langhorne who rides in on her motorcycle every month, whether the dead came from the region or elsewhere. She and other bikers formed a procession for the veterans who served from World War II to the Persian Gulf conflict.

“They didn’t just say I’m only going to be fighting in Vietnam for Chester County,” she said. “They fought for everybody.”

Like Ford, many attendees said they come to bury the vets out of a sense of obligation, a small token of thanks for people who gave so much to their country and in many cases died alone.

“It could have been any one of my relatives that could have died and I wanted somebody to be there for them just like they were here for us to serve our country,” explained Carol Rathbeger, from Chester County, who took off from work with her husband to ride the bodies in.

Rathbeger is part of the motorcycle group the 6B Network. The group heard about the event through the Chester County Coroner’s Office.

The issue of unclaimed remains 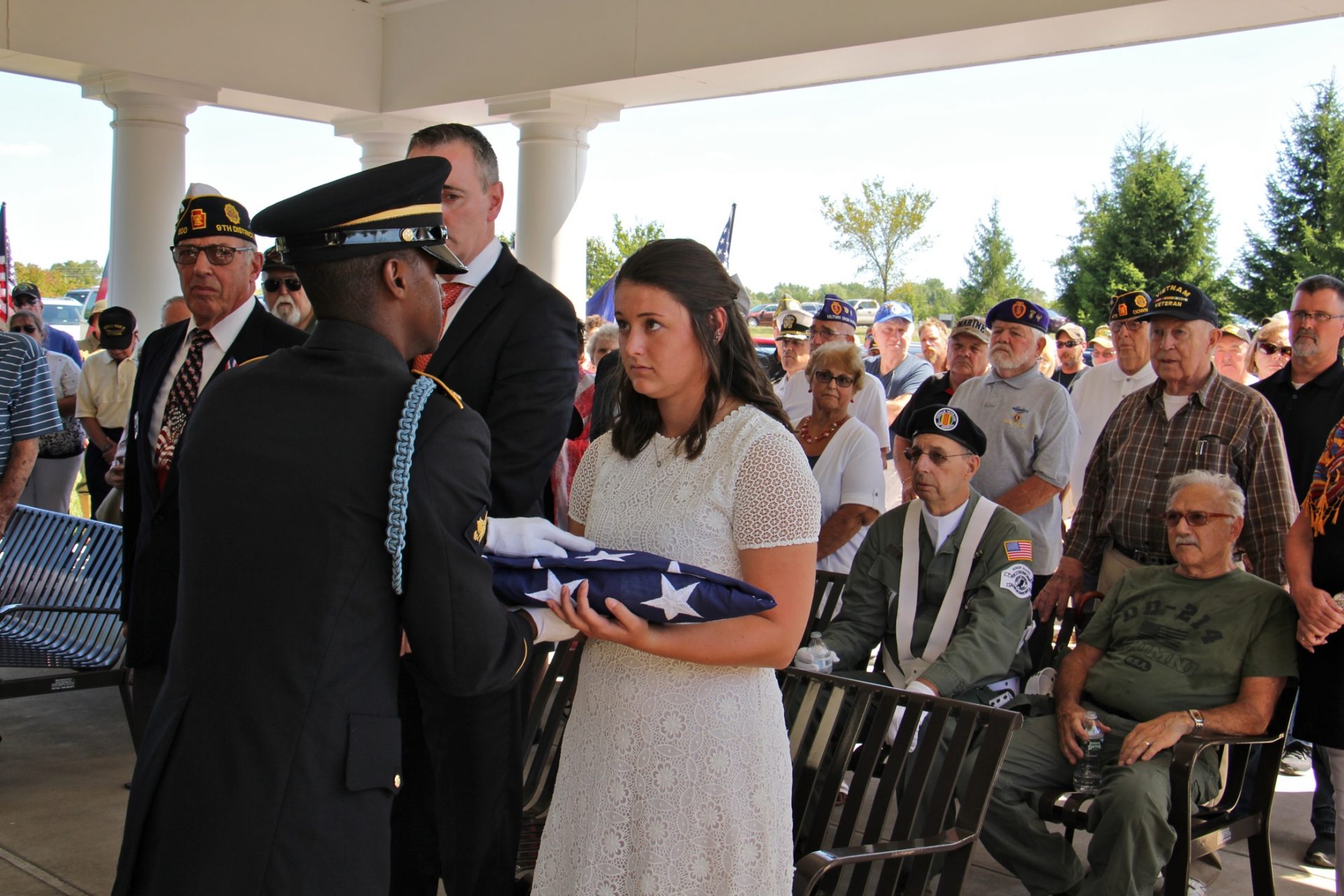 Justine Newman, an intern at the Bucks County Coroner’s Office who helped to identify veterans among the office’s unclaimed remains, is presented with a memorial flag during the service for 14 veterans who died unattended.

Justine Newman, a former intern at the Chester County Coroner’s office, identified nine of the bodies interred Thursday and coordinated with 6B Network and other groups to raise local interest in the ceremony.

This is the second time she’s helped identify and bury veterans whose military service would have otherwise gone unrecognized.

In “Unclaimed,” an ongoing series at the Bucks County Courier Times, investigative reporters found unclaimed remains are growing in number in our region, increasingly falling on the laps of county coroners.

The issue affects more than veterans. The reporters have found homicide victims and children on coroners’ shelves.

“We’ve found between Bucks County, Montgomery County and Burlington County, New Jersey, we have found probably close to 300 people,” said Jo Ciavaglia, one of the reporters on the project. 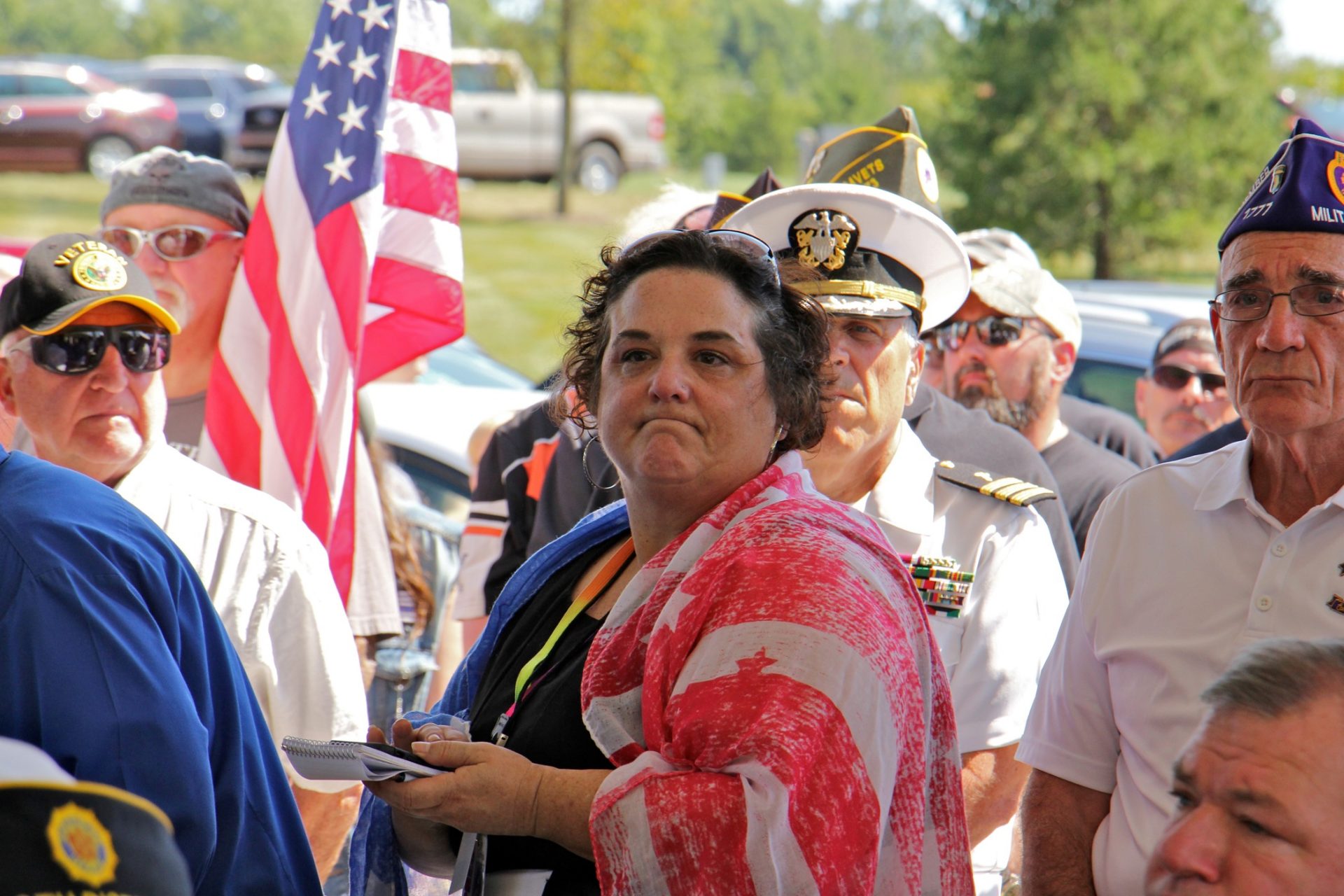 Jo Ciavaglia, an investigative reporter for the Bucks County Courier Times, attends a funeral service for 14 veterans that she helped to identify through her reporting.

Ciavaglia and her reporting partner James McGinnis were also at this Thursday’s burial where they laid to rest the remains of four Bucks County residents their work helped identify as veterans.

One of the men buried was Leo Murphy, a veteran Ciavaglia knew from her time covering homeless camps in Bristol Township.

“Leo had talked to me about being a military veteran because my family was a veteran,” she said. “So I knew at least one veteran and I really am so happy to have Leo finally at rest.”

But proving military service is often more tedious. Records have typos or misspelled names and according to McGinnis, running names through the Social Security Administration’s index is harder for records after 2013.

Still, it’s work that other coroners’ offices have said they want to take on and work Newman, Ciavaglia and McGinnis have vowed to continue.

“I don’t think anybody belongs on a shelf in the morgue,” said McGinnis.

Will lessons from the opioid crisis be retained for the next drug epidemic?