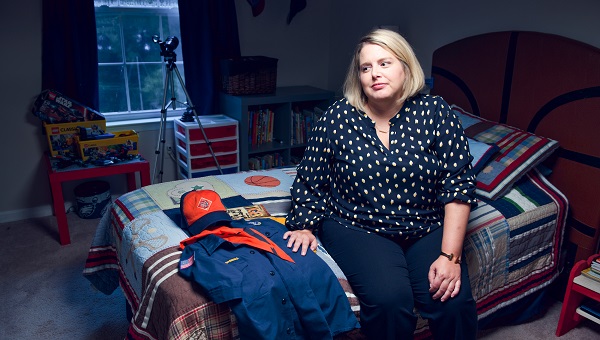 Leslie Slingsby, executive director of Mission Kids, sits on her sons bed with his Boy Scouts of America uniform and handbook at her Collegeville, Pa. home on August 14, 2019. Slingsby’s nonprofit works on behalf of Montgomery County to investigate claims of child abuse and advocates for child protection around the world. (Kriston Jae Bethel for WHYY)

Leslie Slingsby was nervous last year when her 6-year-old son Alex said he wanted to join the Boy Scouts.

By that time, the organization’s past failures to protect children were well known. The announcement last week that lawyers had compiled 800 new sexual-abuse allegations against scout leaders going back decades was a grim reminder of that legacy.

And as the head of Mission Kids, a child advocacy center in Montgomery County, Slingsby understands how children can be hurt. Her organization helps coordinate criminal investigations into 600 abuse cases a year and connects victims to crucial services.

“But I also knew this was something my son might be interested in,” she said of the Boy Scouts. “So I, as a parent, put some protections in myself so my child would never attend any scout meeting or scouting event without me being present.”

A year later, Slingsby’s son is still in scouting, and she is one of thousands of parents nationwide who continue to let their kids participate in the Boy Scouts despite lurid descriptions of abuse in lawsuits and the organization’s own records.

Participation has shrunk in recent years, but Boy Scouts of America says it still has 2.2 million members.

“The Boy Scouts really is a great organization in teaching skills that other places don’t,” Slingsby said. “For example, my son was really interested in science and the outdoors, and this is a really unique organization that focuses on both of those things.” 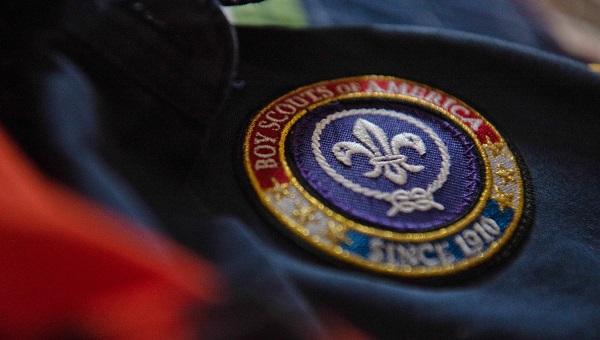 A Boy Scouts of America seal rests sewn to the uniform of Leslie Slingsby’s son on August 14, 2019. (Kriston Jae Bethel for WHYY)

Some parents, like Slingsby, have fashioned their own protocols to ensure their children’s safety. Others say Boy Scouts of America has learned from past mistakes and has itself instituted policies that will protect their children.

“I feel 100% comfortable having my children involved and recommending it to my friends and family to have their children involved,” said Bob Brady, who achieved prestigious Eagle Scout status as a teenager and now leads his daughter’s troop in Sussex County, New Jersey.

Brady said policies in place today are vastly improved compared to those in his youth — an assertion backed up by a timeline of policy changes provided by Boy Scouts of America and detailed in reporting by the Los Angeles Times.

In 1988, according to the Times, scouting did away with “probation,” which allowed accused leaders to continue working with boys. Its policy now is to “remove individuals based on only allegations of inappropriate behavior,” the organization said.

According to its “two-deep leadership” policy, which the organization said was also put in place in the 1980s, adults should never be engaged in one-on-one interactions with children, be it in person, online, or via text. The organization says there should always be two adults — registered leaders or parents — on every outing.

In 2008, criminal background checks were required for all volunteers, according to the Times, and in 2011, the organization required all suspected abuse to be reported to law enforcement.

Boy Scouts of America has taken other steps. Every two years, volunteers must complete youth-protection training, which includes video modules on how to spot neglect and abuse.

Tamara Christensen, a parent in Chester County who has volunteered with the Boy Scouts of America for 15 years, said she is impressed with the quality of the instruction.

“I came out of it thinking, ‘Wow, I volunteer for a lot of organizations, and nobody has training like this,'” she said. 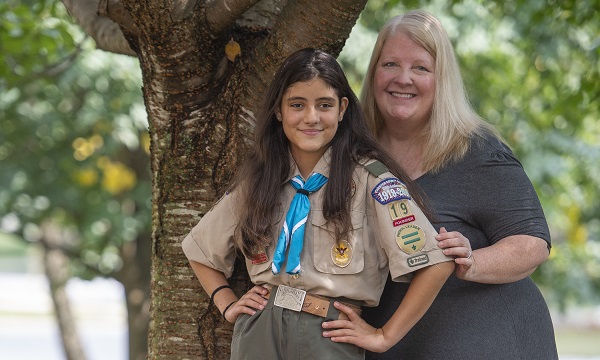 Christensen also credits the Boy Scouts of America for recently partnering with the Barbara Sinatra Children’s Center to create age-appropriate lessons for children that teach them how to distinguish between safe and unsafe touches and respond to abusive behavior. She said the material has made it easier to talk about the difficult concept with her 14-year-old son, Sasha, and 11-year-old daughter, Mia, both of whom are in scouting.

“The way they talk to people who are 5 [years old] is not scary,” she said. “It’s explaining things in a really animated way.”

Slingsby, too, says Boy Scouts of America has taken positive steps to protect children, like making meetings and events open to all parents, as opposed to being exclusive to scout leaders.

But there are aspects of scouting that still concern her.

“The one thing that really stuck out at me is that, in their scout oath, they have obedience” as one of the characteristics of a scout, she said. In many instances of abuse within the scouts, leaders exploited children’s deference to authority to make it harder for the boys to reject unwanted advances.

“I think that’s something that the organization should really should take a little bit of more investigation into, about what that means,” Slingsby said. “Is there a better word?”

Also, Slingsby said she wasn’t aware of the two-deep leadership rule and some of the other protections in place until they were described to her by a reporter.

That suggests communication and enforcement of the policies is uneven across local packs — a weakness Slingsby said needs to be shored up.

“To enforce those rules, I think it’s really important that everyone knows that those are the rules,” she said. Now that she knows about the two-deep rule, for example, “I know it’s a real problem if one of the leaders who is trained and knows about the rule still did it anyway. That’s a red flag for me.”

Slingsby knows from her job that the most likely abusers are people that children know, love and trust. It’s nearly impossible to eliminate all risks for children. But between enhanced Boy Scout policies and her own vigilance, it’s enough to let her son continue in scouting.