They say conditions are mostly adequate, but that 'a golden cage is still a cage' 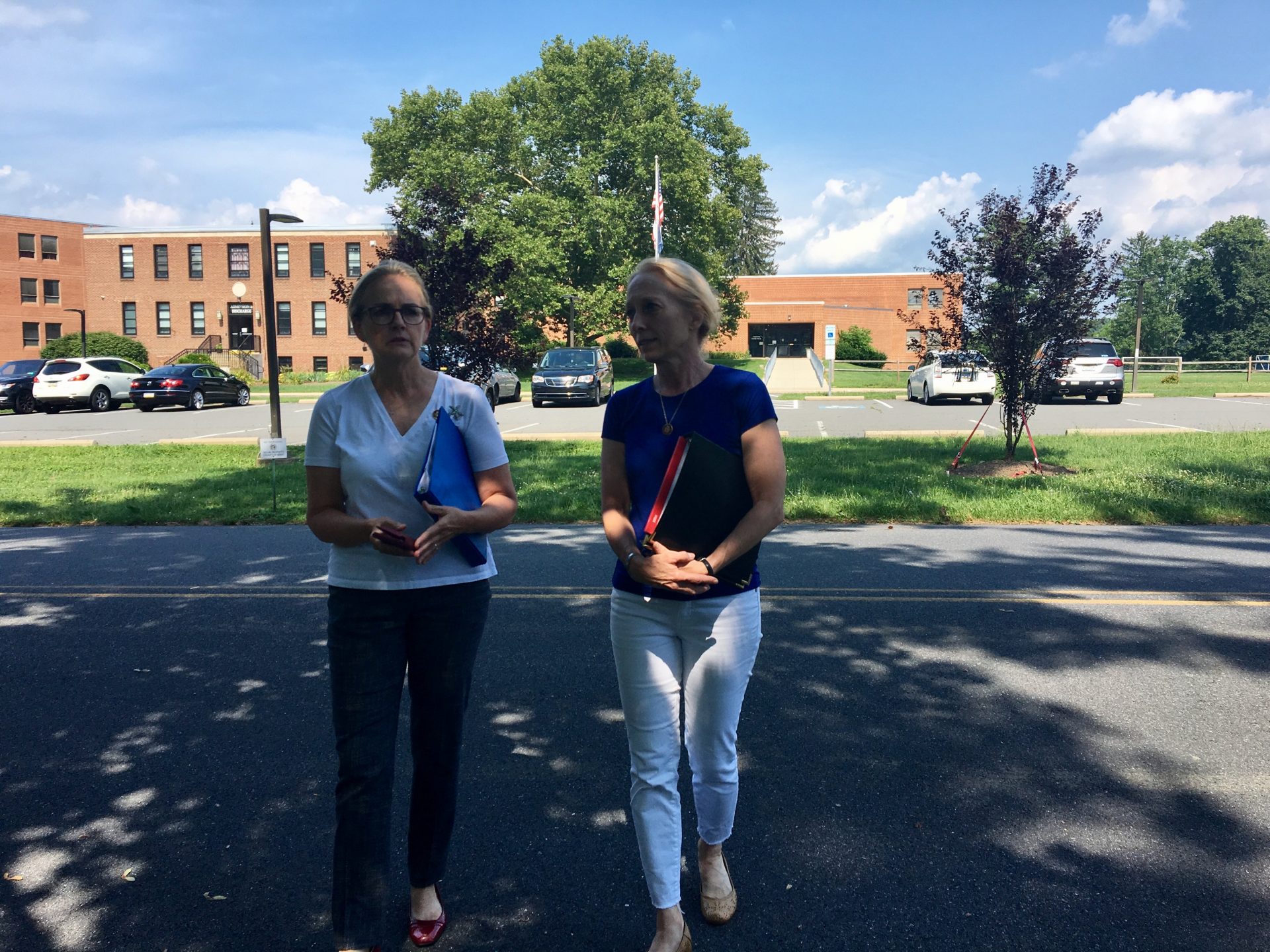 (Leesport) — Like many of their colleagues, freshman Democratic Congresswomen Madeleine Dean and Mary Gay Scanlon have lately been vocally opposing the detention of immigrant families on the southern border.

They’re also drawing attention to a concern closer to their home districts: a family detention center in Berks County.

When Dean and Scanlon—from Pennsylvania’s 4th and 5th districts, respectively—pulled up to the Berks Family Detention Center on a hot Friday afternoon, staff weren’t expecting them.

Dean said that was by design. The move was inspired by experiences she had touring detention centers in Florida and Texas.

“We knew they had sanitized the place, and it was appalling even in its sanitized version,” she said.

The Berks facility isn’t much like the ones on the southern border. The onetime nursing home is smaller, with just 96 beds. Dean described it as a “school you can’t leave.”

Scanlon said she has a couple pressing concerns about the 25 parents and children currently housed there. For one, she noted, no pediatrician is on call—just a doctor who rotates through several different facilities.

Scanlon added that the staff also periodically shine flashlights at detainees as they sleep. She said they were told the practice is a safety measure.

But the bottom line, she said, is she believes children should stay in communities, not detention centers.

“I’m thrilled that the people here are trying to do as best they can under the circumstances,” she said. “But I think the underlying issue is, we should not be doing this.”

Dean put it even more bluntly.

Scanlon and Dean report of the 25 people currently at the shelter, 13 are minors. They say all the families have sponsors in the US, but are waiting for the immigration process to play out.

For some, it takes longer than the typical 20-day standard for family detention. The congresswomen say one man has been there 49 days.

They also reported, a number of the migrants had rough paths even getting to Berks.

Two families, Scanlon said, were recently detained in raids—one in Los Angeles, and one in Philadelphia.

“A six-year-old girl was quite traumatized,” she said. “She was attending school, she had just finished her kindergarten year, and six cars came up to their house at eight o’clock in the morning, blocked the driveway, put her father in handcuffs, and dragged them out.”

Dean said a man and his 16-year-old son were detained on the border in Arizona, after the father had been badly beaten at home in Mexico.

“They arrive at the border seeking asylum, and they were both shackled,” she said. “The young boy showed us the scars on his wrists from the shackles.”

Berks County runs the detention center through a contract with Immigration and Customs Enforcement, and is reimbursed by ICE for its work.

Both ICE and the county strongly defend its operation.

Democratic Berks County Commissioner Kevin Barnhardt recently released a letter saying he supported shutting down the center because of the direction the federal government is taking with immigration enforcement. But he also said its operations are not a problem.

“Families are receiving medical, dental, and psychiatric care, most for the first time in their lives,” he wrote in the letter.

The facility also has a state license which, in 2016, Democratic Governor Tom Wolf attempted to revoke. A state judge ordered it to be reinstated, however, and the issue has been mired in court since.

For years, activists—and now, psychologists—have urged Wolf to issue an emergency removal order to close down the Berks center completely.

It would require a diagnosis of immediate danger within the facility. Wolf has said he doesn’t think he has legal standing, and is concerned detainees would simply remain in ICE custody if emergency removal were issued.

Scanlon and Dean both said they believe detention in any form is immediately harmful to children.

Dean, who previously served as a state representative, said she plans to talk to Wolf about the legal options for an ERO.

“I have a very good relationship with this governor, I admire him greatly, I know he’s very concerned about the center,” she said. “I want to help him make whatever legal arguments he can to shut down the center.”