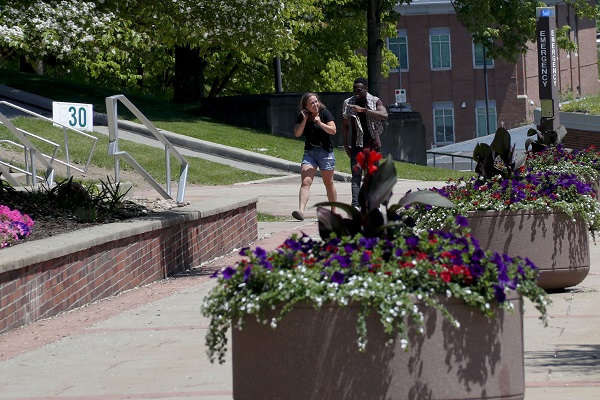 In this photo made on Friday, May 24, 2019, visitors walk through the campus of Slippery Rock University in Slippery Rock, Pa. (AP Photo/Keith Srakocic)

(Harrisburg) — The Pennsylvania State System of Higher Education is still staring at an existing $62 million budget gap for 2019-20, but its students aren’t the ones who are going to fund it, Chancellor Daniel Greenstein said.

“We’re going to manage as effectively as we possibly can over the course of the next several months,” he said Wednesday after the board of governors unanimously voted in favor of a tuition freeze. It’s the first time in 21 years that the state system hasn’t increased tuition.

A number of new affordability goals are being utilized by the state system, among them “shared services,” Greenstein explained. As they’re developed, approved and implemented, Greenstein said cost savings will emerge.

“It will take a while to kick in and get revenues generating from them,” he said.

The state’s colleges and universities have been using “aggressive recession management” for a decade, which they will continue to do while at the same time preserve students’ “quality of education,” he said.

On the plus side, the state system received an additional 2 percent in state funding. Future negotiations with state lawmakers will play a large part in whether students will foot the bill again in the near future.

Leaders said they were very thankful for the additional money.

“Unless you want to continue to put the cost on our students, we’re trying a different path,” Greenstein said. “We’ve got to shift this dynamic somehow.”

Enrollment at the system has declined in recent years. The system’s enrollment peaked at 112,000 in 2011, but the student count has dropped by more than 20,000 since then. The system is competing with more than 200 higher education institutions in Pennsylvania even as the pool of high school graduates is shrinking.

The news of a tuition freeze was refreshing for Millersville University student Nathaniel Warren. He showed up to last year’s quarterly meeting and left feeling “depressed.”

Tuition for an in-state full-time student increased to $7,716 annually, last year, which was a 3 percent increase. The cost will remain the same in 2019-20.

“Now I just hope they can go forward with the next steps they were talking about and design a system that works for everyone,” Warren said. 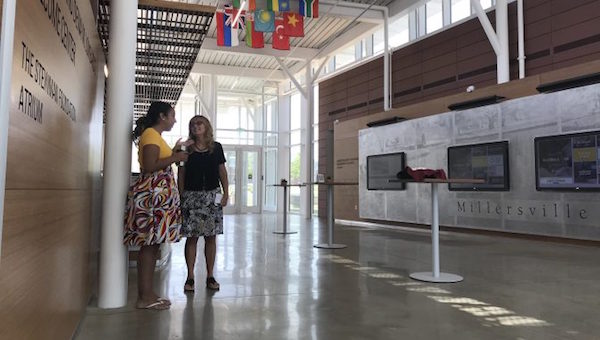 The atrium of the Lombardo Welcome Center at Millersville University. (Marie Cusick/StateImpact Pennsylvania)

“This fall, I’m excited to start student teaching and making an impact on future generations,” Warren said during public comment. “While student teaching is a full-time commitment, it is an unpaid internship, and I know I will need to work multiple part-time jobs in addition to student teaching in order to afford basic necessities like rent. I want to focus on the classroom, but I’m constantly at risk of dropping out due to the cost of school.”

Next year is a different subject. Funding will most likely be decided by each college and university in the 2020-21 school year.

To the handful of students who attended Wednesday’s meeting, that means to them they are going to continue to ask the General Assembly and the board of governors to rethink how they fund higher education costs.

Jarrett Risper, who works for the statewide Pennsylvania Student Power Network, said the group will continue to mobilize students regardless of today’s outcome.

The group will continue to work on an ongoing campaign, “College for All PA,” which believes education is a human right that should be free and accessible to everyone, regardless of age, income, immigration status, disability, or criminal record.

“We’re going to continue to push for legislation statewide, and then nationally, for College for All,” Risper said. “It’s important that we mobilize now on each of the state system’s campuses for 2020-21.”