Cash for the poor? Yes. Arming teachers? No. And 4 other highlights from #AskGovWolf

During a live broadcast at WITF hosted by Keystone Crossroads, Gov. Tom Wolf gave updates on a number of issues central to ongoing negotiations about next year’s state budget.

One of the most contentious components is General Assistance, a program that offers small amounts of cash to certain poor people, and which Republicans are committed to eliminating.

Here’s a look at the General Assistance conflict and five other highlights — including some non-budget related ones — from Thursday’s interview.

1. Cash for the poor

Wolf wants to keep the program, known as General Assistance, but he says the latest move by Republicans puts him in a tough position.

In a nearly-party line vote Wednesday, the GOP-controlled House passed a bill that would eliminate the program.

But the same bill includes something Wolf wants: Money for Philadelphia hospitals, among other things.

Republicans believe Wolf will either sign the bill, or let it become law, because he won’t want to kill the medical money.

“They are pursuing a pretty smart tactic,” Wolf said. “…It’s a Hobson’s choice.”

Wolf says people who benefit from cash assistance also benefit from the tens of millions of dollars that would go to hospitals. He says he’s not sure how he’ll respond.

“I’m not just saying this to put you off. We’re literally still talking about what our options are, because … we are between a rock and a hard place here,” Wolf said.

A fiscal note attached to the bill estimated that eliminating the program will save $53.5 million next fiscal year. But the Wolf administration had a lower estimate for what it costs to maintain the program next year: $24.5 million.

The cash assistance program was eliminated in 2012, but restored in 2018 after a Supreme Court decision. That decision was based on procedural problems with how the legislation passed.

Under the program, eligible people in most counties can receive up to $205 a month, according to the Pennsylvania Department of Human Services.

Should teachers and administrators in Pennsylvania schools be allowed to carry guns? No, Wolf said.

He suggested it was a different situation for “people who have been trained in gun ownership and firearms, whose job it is to protect the safety of the schools, to carry firearms.” But, he added “they need to be trained. I think the random arming of civilians is not a good idea.” 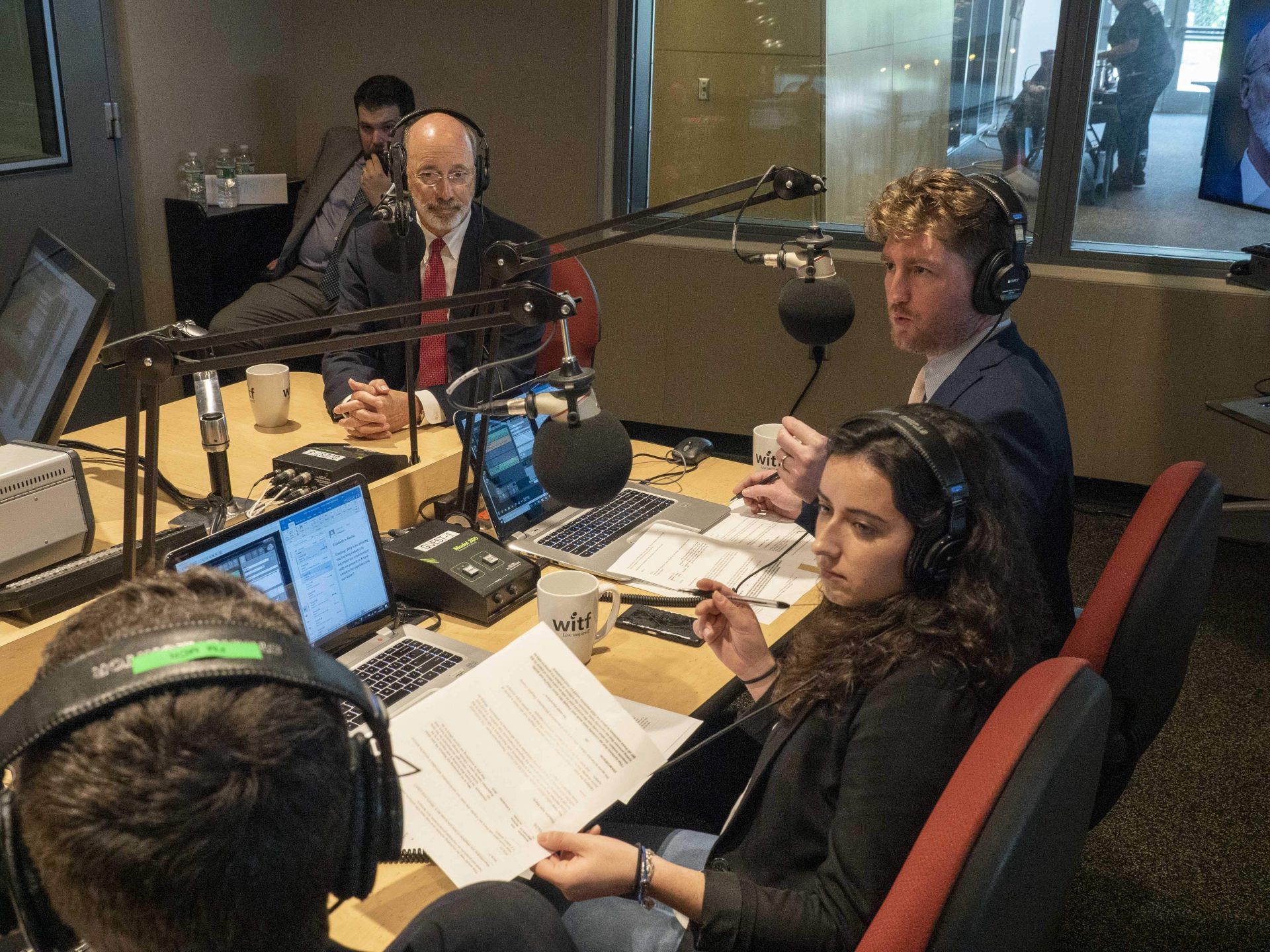 Gov. Tom Wolf listens to a question during an interview at the WITF Public Media Center in Dauphin County on June 20, 2019.

Joe Biden, the former vice president who was born in Scranton, received an early endorsement from U.S. Sen. Bob Casey, D-Pa. But Wolf says he won’t be endorsing in the Democratic presidential primary.

“I have not made a choice, and I won’t,” Wolf said. “I will come out for the winner, the ultimate winner after the convention, and support him or her to the utmost of my ability.”

Several people who submitted questions were critical of natural gas drilling — and aren’t happy that Wolf’s Restore PA plan would rely on a severance tax on natural gas to pay for infrastructure and other initiatives.

@GovernorTomWolf #askgovwolf Why are you promoting the extraction of oil and gas when hundreds of scientists agree that it is harming families and contributing to climate change. #fracking

Wolf’s reply? People need to be concerned about climate change.

The governor was critical of cyber charter schools.

Kevin McCorry, a host of the program, referenced a recent study from the Center for Research on Education Outcomes, which suggested the online schools underperform traditional public schools.

“At this point, are cyber charters a good idea at all?” McCorry asked. 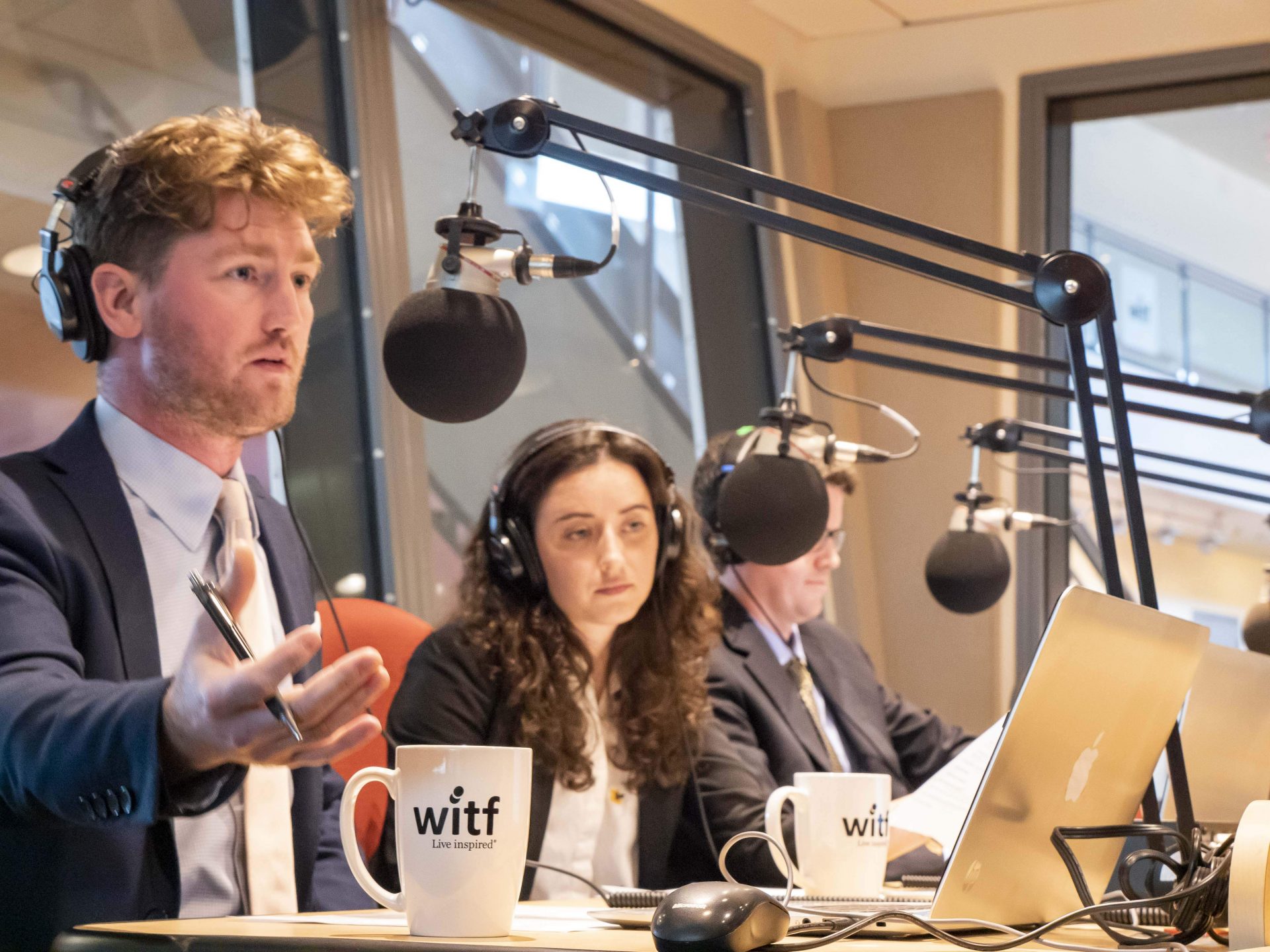 Kevin McCorry, left, asks Gov. Tom Wolf a question during an interview at the WITF Public Media Center on June 20, 2019.

But he didn’t say they should be abolished. Instead, he said reforms are needed, and he thinks more Republicans are recognizing that.

One person wanted to know what the state is doing to help food insecure college students.

#askgovwolf are you aware of the growing number of food insecure college students in our Commonwealth? Are there any plans at the state level to address this issue?

“Frankly, the area of student food insecurity is new to me,” Wolf said. “And I’m sure there are people out there who have known about this for much longer than I have. But this is something that I think Pennsylvania …  agriculture is our biggest industry This is something that we can and should do something about.”