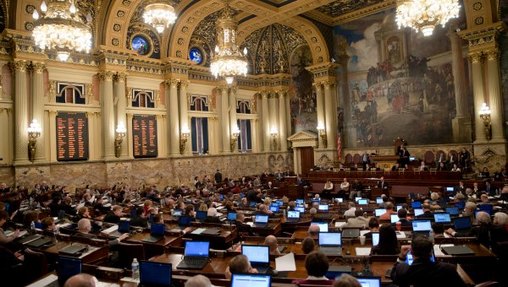 Some top positions in the state House’s Republican and Democratic caucuses will be open after the midterm election–and members are already positioning themselves to fill them. (Photo by AP)

(Harrisburg) — Though most Pennsylvania politicians up for reelection have their sights set on November 6th, some state House lawmakers are already thinking about the weeks that’ll come after.

Two top Democrats and a top Republican are leaving the House–and that means their seats are fair game for representatives who want to take on more control.

In the Democratic Caucus, Minority Appropriations Chair Joe Markosek of Allegheny County and Minority Whip Mike Hanna of Centre County are stepping down.

Both have held their leadership roles since 2011–as has fellow Western Pennsylvanian Frank Dermody, the minority leader from Allegheny County.

In that time, the commonwealth’s Democratic stronghold has continued shifting steadily southeast, to Philadelphia and its suburbs. Mary Jo Daley, a Montgomery County Democrat and vice-chair of the Southeast Delegation, said she thinks it’s time for leadership to reflect that–and other–changes.

“We have a lot of talented reps, and I’d like to see some of us in leadership,” she said.

“I also think we need more women in leadership,” she added.

A number of women have served as secretaries and chairs of the Republican and Democratic caucuses over the years, but virtually none have risen to leadership positions beyond that. There are only two exceptions: Republican Jane Orie, who served as Senate Majority Whip from 2001 to 2011–and spent two-and-a-half years in prison for campaign corruption–and Democrat Mary Varallo, who was House Minority Whip from 1959 to 1960.

Daley noted, it’s early for talk of leadership elections. But she has made no secret of her interest in a higher position–and neither have a number of her colleagues in Philadelphia and the suburbs.

Both the upcoming election, and the leadership contest, is ultimately about the fate of the House Democrats, she said. The caucus has been stuck as a shrinking minority since 2011–and it’ll almost certainly take years of concentrated effort to retake control of the chamber.

“This is not a one-election kind of thing,” she said. “I think we need, probably the next two elections.”

Meanwhile in the GOP, Majority Leader Dave Reed’s departure has created an opening most members say is likely to be filled by Bryan Cutler–the Lancaster County Majority Whip.

Cutler has been public about his plans to seek the position. And though Reed hasn’t formally endorsed him, he did tell the LNP Cutler would be a “natural fit” for the job.

Leadership elections are carried out every two years by the newly elected members in each of the legislature’s four caucuses. Leaders must win by a simple majority.

The House leadership election is tentatively scheduled for November 13th.