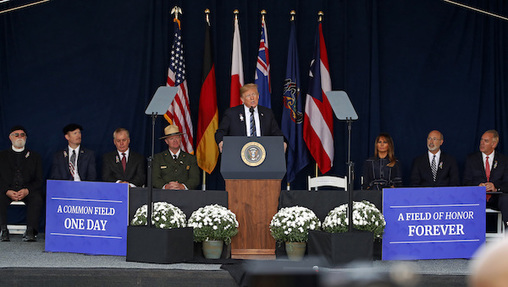 (Shanksville) — Every year, the families and friends of those killed on Flight 93 gather near the spot where the United Airlines jetliner went down, and read the names of their lost loved ones.

Those 40 passengers and crew were flying to California when their plane was hijacked. It’s thought the terrorists on board intended to crash in Washington DC.

The story of what happened next is well known, especially to the people who attended the memorial.  After the hijackers took control, the passengers and crew took a vote.

They voted to act. And the plane crashed, not in a major city, but in an empty field.

“At that moment, they took America’s fate–and their own fate–back into their own hands,” said President Donald Trump, who keynoted the event.

“We honor their sacrifice by pledging to never flinch in the face of evil, and to do whatever it takes to keep America safe,” he told the crowd.

“Hero,” Wolf said, is “one of the most overused words in the English language.” But he said, the 40 passengers and crew on Flight 93 deserve that distinction. 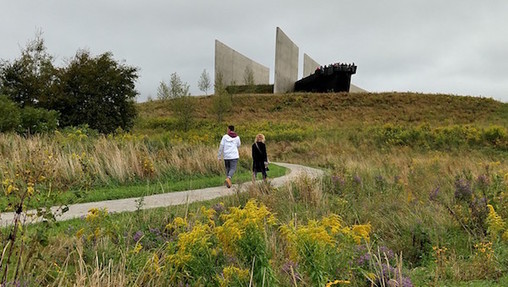 People walk along the path while a crowd gathers at the visitor’s center overlook at the Flight 93 National Memorial on September 11, 2018. (Lisa Wardle/WITF)

This year, the Flight 93 memorial dedicated its final major feature–a 93-foot-tall Tower of Voices that’ll hold a wind chime for each of the passengers and crew on the flight.

Gordie Felt, who chairs the Families of Flight 93 organization and lost his older brother Edward in the crash, said at the ceremony, the point of the memorial is to make sure no one forgets what happened 17 Septembers ago.