17 years after the crash, the Flight 93 Memorial nears completion 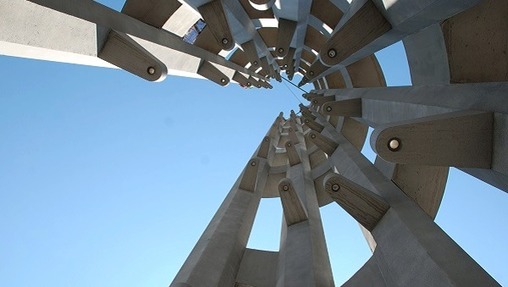 View from underneath the Tower of Voices on July 10, 2018, before the chimes are installed. The monument is being built, tuned and erected over the next few months. It is the last major feature for the Flight 93 National Memorial in Stonycreek Township, Somerset County, Pennsylvania. (Lisa Wardle/WITF)

All that’s left is installing an unprecedentedly enormous, complicated set of wind chimes.

Architect Paul Murdoch first pitched his plan for the memorial more than 13 years ago, and has been incrementally building features since then.

This final stage is dubbed the Tower of Voices–a 93-foot tall concrete structure that’ll be adorned with 40 chimes–one for each of the passengers and crew members killed in the crash during the September 11th attacks.

“This is probably the most challenging and the most unique piece,” Murdoch said. “Had we tried it day one, I’m not sure we could have done it.” 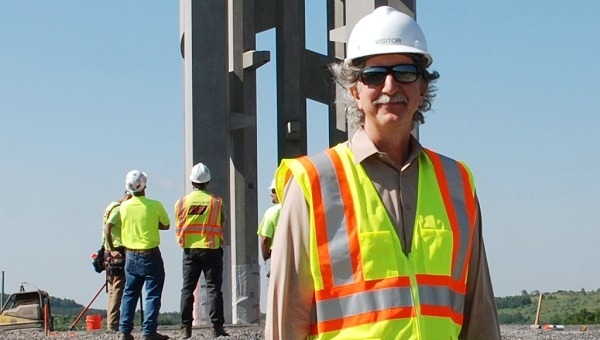 It became an international project, with wind engineers from Colorado and Australia, a musician from upstate New York, and structural engineers from California and London.

They had to do complicated analyses of wind patterns to make sure the chimes would sound alright, and repeatedly returned to the drawing board while figuring out how they’d swing.

Murdoch said it’s all worth it.

The monument will officially open September 9th–two days before the 17th anniversary of the crash of the lone hijacked plane that didn’t hit its intended target.

It is believed the passengers and crew fought back — forcing the four terrorists to down the plane.