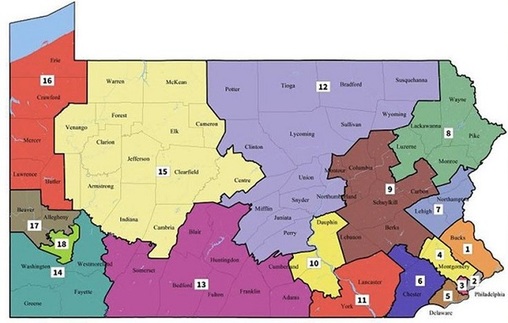 The state Supreme Court redrew the commonwealth’s congressional map after ruling it had been unconstitutionally gerrymandered by Republicans. Lawmakers are deadlocked over how to reform the process.

(Harrisburg) – For the second time this month, a state House panel has stripped a bill that would have established an independent redistricting commission made up of citizens, and replaced it with language that gives the legislature even more power over the process.

GOP House State Government Committee Chair Daryl Metcalfe called the surprise meeting Monday, because the bill’s supporters were trying to circumvent his panel to get the measure to the House floor.

A number of lawmakers complained they were only given about ten minutes’ notice of the amendment.

Metcalfe’s version of the bill would put six lawmakers in charge of the redistricting process.

Currently, congressional maps are passed by the entire legislature and signed by the governor.

Metcalfe’s proposal would eliminate the governor from the process entirely, and would allow the Commonwealth Court to be a final arbiter of disputes, not the state Supreme Court.

After changing the language, Metcalfe quickly adjourned the meeting without calling a vote to pass the measure.

The Butler County Republican said if a version of the bill comes up again, he’ll do the same thing.

“If they want to debate a proposal, they will debate this proposal in this committee,” he said.

Proponents of an independent commission say it would make the redistricting process less partisan, and therefore represent the people of Pennsylvania better.

But Metcalfe, and a number of other Republicans, argue the legislature itself is more representative.

“The sponsors are open about their admiration of this California commission on which it’s based,” he said. “But in California, every single commissioner had an advanced degree…It’s like, there is no blue-collar worker that’s represented here.”

The original version of the redistricting bill had 110 cosponsors. More than 50 percent of the legislature–Republicans as well as Democrats–supported it.

But Metcalfe noted, that’s not enough to dislodge it from his committee.

“I have fifteen votes for this bill in the committee,” he said.

And as for the bill’s supporters?

“Well, most of them are Democrats to begin with, and they’re in the minority so they’re not governing,” he said. “There’s not that many Republicans, and some of the Republicans I know have been browbeaten…by activists that are the arm of the League of Women Voters.”

Democratic Representative Steve Samuelson, of Northampton County, sponsored the bill that was gutted a few weeks ago.

He contested the claim that Republicans had been “browbeaten.”

“The sponsors of this bill have been contacted by average citizens across Pennsylvania,” he said. “Legislators have told me they sponsored this bill because they met with citizens from their home communities.”

Samuelson said he and other supporters are still trying to push the bill onto the floor, one way or another.

Democratic House State Government Committee chair Matt Bradford, of Montgomery County, was less optimistic. He said he can only think of one sure way to get it passed:

“There’s an election in November,” he said. “And I hope people turn out in historic numbers and have the same level of frustration I have with the circumventing of our democratic process.”

The Senate is holding hearings on a similar redistricting measure.

This story has been updated to clarify that under current law, the legislature passes congressional maps; not a panel of lawmakers.

Lawmakers divided over how to fix State System of Higher Education