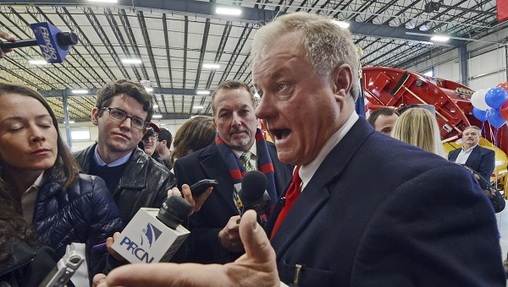 Wagner claimed the declaration is a sign of the Wolf administration’s incompetence. The administration said Wagner is using the opioid crisis to advance his political agenda. (Photo by AP)

Here are the most prominent perspectives on this story. We are on the lookout for stereotypes and assumptions in our own work, and we invite you to point out we may have missed. Contact us on our Trusting News page.

(Harrisburg) — One of Governor Tom Wolf’s potential gubernatorial rivals is taking issue with a 90-day emergency declaration he issued in response to mounting opioid overdose deaths.

Republican Scott Wagner said his problem isn’t about opioids, though. It has to do with gun rights.

Wagner, a York County state senator, said he does support addressing the opioid epidemic–but not by emergency declaration. He called the declaration sloppy, pointing to a state statute that prohibits carrying a firearm in public during an emergency without a concealed carry permit or hunting license.

And he questioned whether it’s legitimately intended to help addiction victims, or if it’s a “political ploy.”

Wolf spokesman JJ Abbott called the criticism baseless, and said the governor worked with law enforcement on the order to make sure gun owners wouldn’t be affected.

“Any implication otherwise to score cheap political points around the greatest public health crisis in our lifetimes is flat-out wrong,” he said.

The statute in question doesn’t allow weapons to be seized during an emergency, and there is little record of it ever being enforced.

But a spokesman for Wagner contended, “it is still limiting the rights of an individual to carry a firearm without a license.”