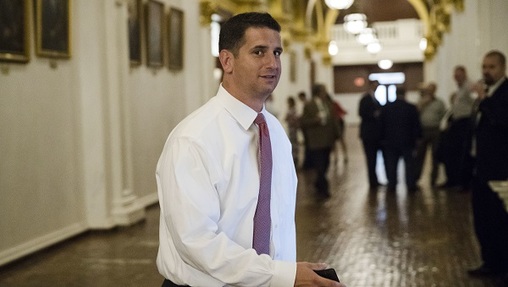 In the past, Reed has generally brushed off rumors that he’s considering seeking higher office. But now, he says it’s a possibility. (Photo by AP)

(Harrisburg) — House Republican Leader Dave Reed, who has represented part of Indiana County for 15 years, is considering running for Congress.

He’s eyeing the western Pennsylvania seat that is being vacated by Republican Bill Shuster after an unexpected decision not to seek reelection.

Reed, 39, said nothing about the potential run is set in stone, and was vague about when he’ll make a formal decision.

“It’s certainly something, when that possibility drops out of the sky, you think about,” he said. “I’ll continue to think about it, and I’ll make a decision about 2018 very, very quickly.”

Reed has been majority leader for three years–all of which have seen painful state budget fights. He indicated, he’s not opposed to leaving that part of the job behind.

Asked if tough budgets were part of the reason he’s considering an exit from the statehouse, he laughed. “I don’t know, I’ve enjoyed three years nonstop of budgets.”

“But look,” he added, “hopefully this year will be a smoother budget process…though I’ve hoped that every year so far, and so far, I’ve been wrong every year.”

Reed has expressed that sentiment before–like during a moment of frustration as budget talks crumbled in October.