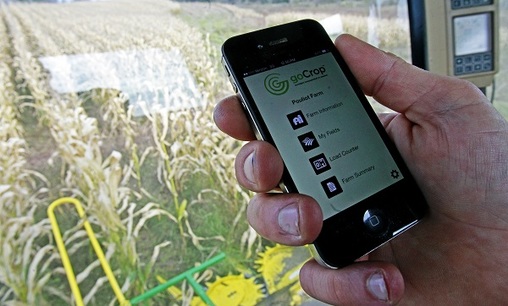 FILE PHOTO: Tony Pouliot demonstrates the goCrop app on his mobile photo in the cab of his combine on his farm in Westford, Vt. (AP Photo/Toby Talbot)

(Harrisburg) — State lawmakers on the Agriculture Committee took advantage of the Farm Show’s presence in Harrisburg this week, and convened in a back room of the complex to discuss their top priorities with Agriculture Secretary Russell Redding.

One of their primary focuses didn’t have to do with farming, exactly; rather, with making sure rural communities aren’t held back by bad internet access.

In cities and suburbs, high speed broadband internet is typically a given.

But Representative Pam Snyder said in her rural district in Pennsylvania’s southwestern corner, it’s often a luxury — and that can profoundly affect the people living there.

Snyder, a Democrat, said there is no partisan divide on the issue.

But she noted, it’s still tough to get anything done.

Mark Critz, who directs the Wolf Administration’s Rural Development Council, said the problem is resources; Pennsylvania is big and has tricky, mountainous topography, and broadband infrastructure is expensive.

Right now, the state is largely limiting its broadband work in rural areas to small, localized projects. But Critz said the problem won’t get solved in the short-term without some sort of statewide initiative.

He said that hypothetical venture would have to rely heavily on federal grants–but that the commonwealth should chip in as well.

“If we’re not talking about putting some skin in the game, we’re on a long road to accomplish this,” he said.

Right now, about eight percent of Pennsylvania doesn’t have broadband access, which makes it the 12th best-connected state, according to wireless internet tracker Broadband Now.

But Vince Phillips, with the farming advocacy group Pennsylvania State Grange, said that doesn’t mean much for rural Pennsylvanians who aren’t seeing improvements.

“We’re getting near kind of a crisis point,” he said. “Pennsylvania farmers cannot participate in the world market because they can’t talk to the world market. Pennsylvania students coming from rural areas are functionally–I hate to say deprived, but I can’t think of another word to describe it.”

Though it doesn’t include funding, the state lawmakers and others at the Farm Show meeting said they’re encouraged by it.

If not taxpayers, who should pay for sexual harassment claims?