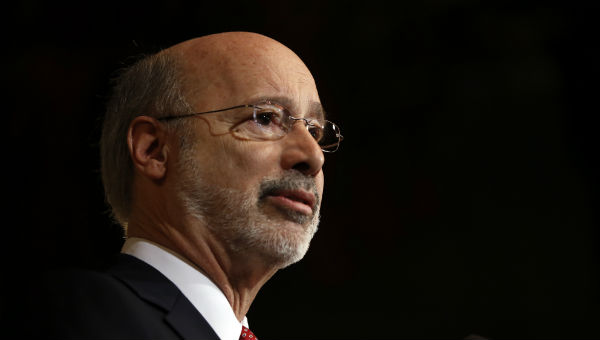 (Harrisburg) — Gov. Tom Wolf’s office on Thursday refuted claims by Sen. Scott Wagner, R-York, and others that the governor’s declaration Wednesday of the opioid crisis as a public health emergency would infringe on gun rights of citizens.

State Sen. Scott Wagner, R-York, who has said he is running for governor, contended Thursday that Wolf’s action was “another example of incompetence,” although he had initially praised it.

“While I earlier commended Governor Wolf for coming to the table to provide long overdue leadership on the opioid epidemic, further review of his statewide disaster emergency declaration has made it clear that he took the wrong approach,” Wagner said in a news release.

“There is no reason why addressing this crisis should come at the expense of our Second Amendment rights,” Wagner continued. “The sloppiness of this declaration is another example of the incompetence of this administration, and calls into question whether this was a good faith effort from the governor to help those suffering from addiction or just another thoughtless political ploy to silence the critics who’ve been saying (he) hasn’t done nearly enough on the issue.”

Wagner’s about-face came after attorney and blogger Joshua Prince described the governor’s declaration as “seemingly triggering the firearm prohibitions found in 18 Pa.C.S section 6107 during declared emergencies.” His blog post, shared on social media, was titled, “With a Stroke of a Pen, PA Governor Wolf Limits Firearm Rights by Proclaiming State of Emergency.”

However J.J. Abbott, a spokesman for Gov. Wolf, responded to an email inquiry from the Public Opinion Thursday that such suggestions are “flat-out wrong.”

“The governor’s declaration does not allow for law enforcement to confiscate firearms, and the governor worked with law enforcement to ensure that his actions to fight this epidemic have no impact on citizens and their firearm rights,” the statement said. “Any implication otherwise to score cheap political points around the greatest public health crisis in our lifetimes is flat-out wrong.”

“The law specifically does not allow for any firearms to be seized, taken or confiscated as a result of the disaster declaration,” the statement continued. “A declaration specifically has no effect on people with a concealed firearms license, someone using a firearm with an active hunting license or someone open carrying a firearm if actively engaged in self-defense.”

The statement noted that disaster declarations are frequently used in response to extreme weather, without any curtailment of gun rights.

“In 2016, for example, there was a disaster declaration for winter weather from January 21st until March 23rd,” the statement said. “We looked closely at this matter as part of the months-long process to develop this declaration, and we are not aware of any adverse effects on citizens and their firearms in the past during such a weather event with a declaration.”