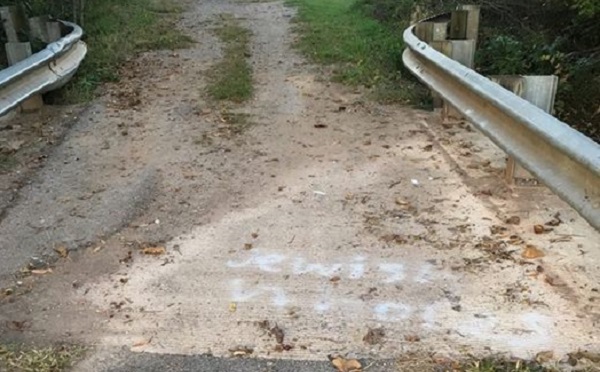 The words “Jewish Whores” was found September written on a walkway in Manchester Township, according to resident Amy Milsten. (Photo: Amy Milsten)

Manchester Township resident Amy Milsten said she and her 10-year-old daughter found the words “Jewish Whores” written on a walkway.

(Undated) — The words “Jewish Whores,” spray-painted in white on a small bridge near her Manchester Township neighborhood, halted Amy Milsten in her tracks.

“I kind of stopped in disbelief,” Milsten said. “I couldn’t believe it … It was kind of a shocking thing to find in our neighborhood.”

Milsten, 47, said she was walking with her daughter, Rachel, 10, and their dog between 6 and 6:30 p.m. when they came upon the anti-Semitic graffiti on Sept. 23. The bridge allows access over a creek and connects the neighborhoods of New Brittany and New Brittany II, she said.

“It’s kind of just ironic that I saw it, because we are the only Jewish family in the entire development, as far as I know,” she said.

Milsten said despite that, along with the fact that she passes by the area quite often while running or walking her dog, she does not feel the message was directed toward her or her family.

“I don’t think that it was for us,” she said. “I believe it was just coincidence.”

Rachel Milsten, who has keen observation skills, found some ripped-up pieces of paper nearby, in which the words “school rules” were written. Milsten suspects whoever wrote the slur may have been angry at something that may have happened at their respective school.

After finding the slur, Milsten and her daughter reported it to the homeowner association president, and spoke with Northern York County Regional Police on Sept. 25, providing an officer with photos.

Milsten said Rachel was stunned at the slur, asking, “Why do people do this?” and remained upset for the rest of the day.

Still, at 10 years old, Rachel is cognizant of the ugliness that can arise in the world, Milsten said.

Milsten said that since news of the slurs came out, some on Facebook have responded with comments such as, “They’re just words,” she said.

However, Milsten contends that words can be a gateway to hate crimes and other example of divisiveness, especially to young, impressionable minds.

“We need to teach our children that we are all equal and that there is never a reason for hatred,” she said. “People need to know it’s not OK; it’s never OK.”

Chad Smyser, member of the Interfaith Justice Council of York County, sent a letter, “Let us see what faith can do,” to the York Daily Record in response to the anti-Semitic incident.

The letter affirms the council’s obligation to rise up against acts of hatred and bias, by responding with truth and love.

“We, the members of the Interfaith Justice Council, are in solidarity with the family in Manchester Township that recently discovered anti-Semitic graffiti in their neighborhood,” the letter reads in part. “We recognize that injustice anywhere is a threat to justice everywhere. And as Dr. King taught, we embrace the network of mutuality that ties us all together. But this work is too great for us alone.”

“We call on every person of conscience in York County to stand against hatred and bias wherever they may see it. Our council was formed in response to the horrible bomb threat made against the York Jewish Community Center in February, but sadly we know that there are so many more wounds to heal.”

This story is part of a partnership between WITF and York Daily Record.