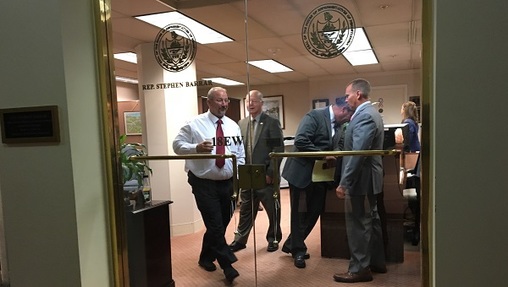 Lawmakers mill around an out-of-the-way office, where a small group congregated for closed meetings after deciding not to vote on the budget Tuesday. (Photo by Katie Meyer/WITF)

(Harrisburg) — The state House is still working on a plan to fill a $2.2 billion dollar gap in a budget that is almost three months late.

But negotiations took an unexpected turn Tuesday when the chamber adjourned suddenly without holding an expected vote on a plan from a conservative faction of members.

On Monday, House GOP spokesman Steve Miskin had appeared fairly sure a vote would happen the next day.

But something happened in the hours since then that stalled the process.

After the session’s abrupt end, GOP leaders huddled in a basement office with a small group of conservative members–many of whom devised the proposal.

In its original form, it would have raised $2.4 billion by transferring apparent surpluses out of off-budget funds–something the Wolf administration opposes, and the House Democrats and the GOP-led Senate responded to skeptically.

“Any time you get a plan out there I think you’re going to make some changes along the way,” he said. “We’re working through those changes, and we hope to have a draft ready to go for a vote this week.”

A more limited version of the same plan is also in the works.

It raises half as much money, and could be merged into a compromise solution if the broader plan fails. However, it’s still unclear what the rest of that alternative solution would look like.

Reed said all new taxes are currently off the table.

Meanwhile, Treasurer Joe Torsella is renewing his warnings that, thanks to significant payments coming due this week, the state’s main bank account will dip below zero on Friday.

Torsella has refused to extend a customary line of credit to cover short-term expenses, arguing that with the budget unbalanced, it would be irresponsible.

In a statement, spokesman JJ Abbot said the situation could “force the Commonwealth to run out of money and jeopardize funding across government.”

It’s unclear what Wolf will do on Friday. Abbot said only that the best option is for “urgent House action to fund the budget that they passed overwhelmingly in June.”