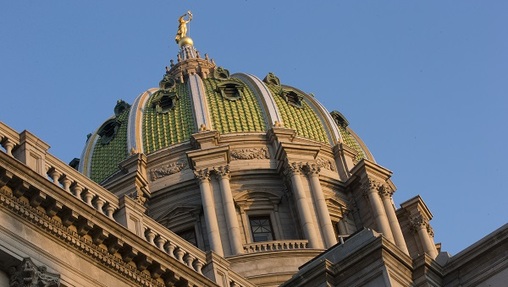 The House’s first day back in session was largely spent caucusing on a controversial budget plan from the chamber’s most conservative wing. (Photo by AP)

They’ll probably vote on the proposal sometime Tuesday–whether or not it’ll actually pass.

Appropriations Committee Chairman Stan Saylor said for now, the chamber is focusing exclusively on the plan supporters have dubbed the “Taxpayers’ Budget.” It would redirect money from off-budget state funds to fill revenue gaps.

Saylor stopped short of predicting whether it would get enough support.

Dan Moul, one of the plan’s authors, had no such concerns.

“We have a few people that are uneasy with some of the things that we’re doing, but that’s to be expected,” he said. “I think we will have the votes.”

Several state agencies–most notably, PennDOT and the Department of Agriculture–have sent House Republicans letters warning the money that would be transferred under the proposal is already committed to other projects, and isn’t free to use.

Moul said he thought those concerns were overblown.

“I can write anything in a letter,” he said. “I can write a letter that makes your house 20 stories tall. It doesn’t make it true.”

Two versions of the “Taxpayers’ Budget” have been developed. One raises $2.4 billion and totally redirects several funding streams. The other raises half as much, and only includes one-time transfers.

Moul acknowledged, in the event the more expansive plan doesn’t get enough support, the smaller alternative could be folded into a compromise budget proposal.

Senate GOP lawyer Drew Crompton commended House Republicans for taking the time to analyze off-budget funds for potential savings. But he added, he doesn’t think the “Taxpayers’ Budget” is an adequate solution.

“If there was this amount of money to be utilized, we would have used it,” he said. “We’re doing our due diligence, but there’s not $2.2 billion in reserve funds. It’s just that simple.”

House is back to work on budget, but the way forward remains murky