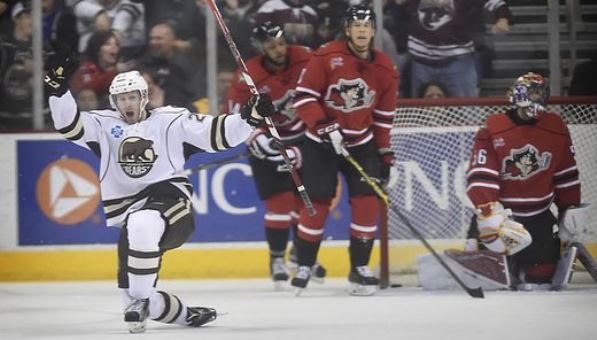 Hershey Bear Sean Collins (23) celebrates after hitting the first goal of the game Sunday, May 1, 2016, against the Portland Pirates at the Giant Center. (Michael K. Dakota, Lebanon Daily News)

And now the Hershey Bears will face an old foe to do it all again.

After evening their Atlantic Division Semifinal series one night earlier, Hershey eliminated the Portland Pirates in Game 5 Sunday with a 2-1 triumph at Giant Center. Ryan Stanton netted the game-winner at the 8:29 mark of the second period on assists from Jakub Vrana and Ryan Bourque. The Bears then survived a third-period score off Wayne Simpson’s redirect and an ensuing Portland blitz to advance via a 3-2 series win.

Hershey is slated to meet rival Wilkes-Barre/Scranton in a best-of-seven Atlantic Division Finals series beginning at 7 p.m. Wednesday back at Giant Center.

Bears goalie Justin Peters made 23 saves in the series-clincher and received his second straight honor as first star of the game.

“(Peters) was awesome. I think he definitely was the MVP of that series for us, no doubt,” Stanton said. “He deserves it. He works so hard all year, and he always puts in the extra work, so it was good to see him come through for the guys like that.”

Peters’ brilliance shone brightest over a tight second period and would have been amplified further had it not been for Stanton’s goal. The 26-year old defenseman finished off a well-orchestrated 3-on-2, carefully collecting Vrana’s cross-ice feed and depositing it from atop the left circle. Vrana and Bourque had initially sped out on a 2-on-1, until throwing on the brakes for Stanton and a trailing Pirate to join the fray, which later ended with a Hershey team celebration.

“Vrana made a good play, kind of delayed, made an awesome pass right over to me,” Stanton said, “and I just threw the puck through his five-hole.”

Simpson’s answering score ended a shutout streak of more than 100 minutes for Peters, which included tens of stops during Pirates power plays. The Bears held Portland to 1-for-24 with the man-advantage over the entire series, and the Pirates were 0 for 2 on Sunday.

“When my team puts up a wall like they did there, it’s real fun to be a part of. It’s exciting,” Peters said. “A couple elimination games there, that’s going to build a lot of confidence for our team there.”

Confidence was easy to come by early, as Hershey gained the better of play at each end of the opening period. Bears center Sean Collins struck first at the 14:19 mark, punctuating a brief stretch of Hershey possession that answered a far lengthier Portland hold on the puck.

McKenna was pulled for good with 1:20 remaining, moments before a Pirates timeout. Upon breaking from its huddle, Portland rushed the net repeatedly and peppered Peters, only to watch its season die in a crowded corner as 6,329 Giant Center guests stood in applause. Sitting at the bottom of the right circle, Collins one-timed a Liam O’Brien pass from behind the cage, sending it inside the far post to best stalwart goalie Mike McKenna (21 saves). Hershey went on to lead 9-7 in shots at stanza’s end, but trailed 24-23 by the final horn.

And that’s why Hershey will continue to chase the Calder Cup further into May.

*This article is part of a content-sharing partnership between WITF and the Lebanon Daily News.

Busy stretch of U.S. 11/15 in Marysville to close tonight