This Nov. 7, 2022, photo, released by the Pennsylvania Department of Environmental Protection shows a methane leak at a well owned by Equitrans Midstream at their Rager Mountain storage facility near Jackson Township, Pa. A vent at the underground natural gas storage well in Western Pennsylvania has been spewing massive amounts of planet-warming methane into the atmosphere for more than 11 days. (Pennsylvania Department of Environmental Protection via AP) 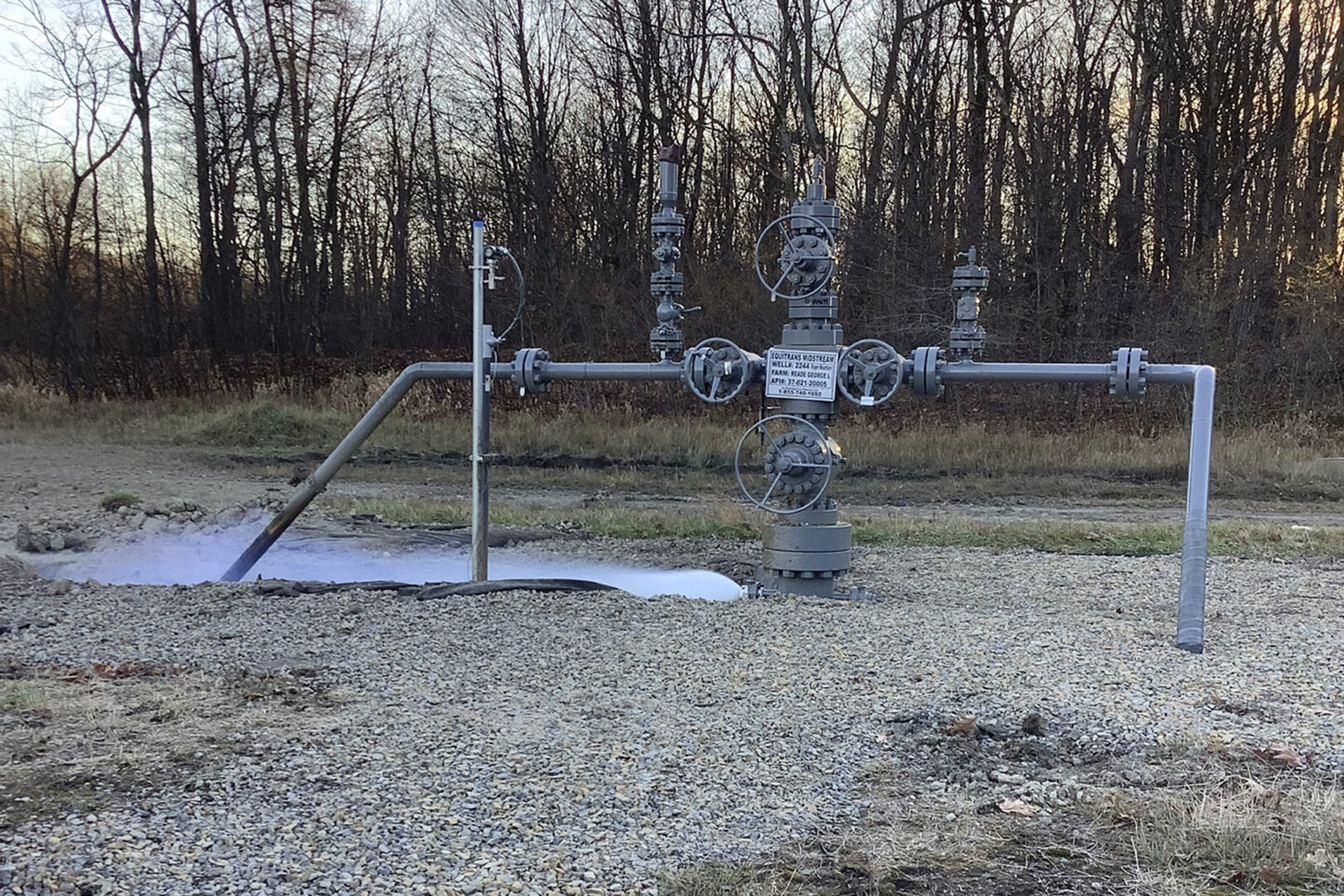 This Nov. 7, 2022, photo, released by the Pennsylvania Department of Environmental Protection shows a methane leak at a well owned by Equitrans Midstream at their Rager Mountain storage facility near Jackson Township, Pa. A vent at the underground natural gas storage well in Western Pennsylvania has been spewing massive amounts of planet-warming methane into the atmosphere for more than 11 days. (Pennsylvania Department of Environmental Protection via AP)

(Zelienople, PA) — A vent at an underground natural gas storage well in Western Pennsylvania has been spewing massive amounts of planet-warming methane into the atmosphere for more than 11 days and attempts to plug the leak have thus far failed.

Owner Equitrans Midstream said the well at its Rager Mountain storage facility, located in a rural area about 1.5 hours east of Pittsburgh, is venting about 100 million cubic feet of natural gas per day, according to initial estimates.

If accurate, that would total 1.1 billion cubic feet in emissions so far, equal to the greenhouse gas emissions from burning 1,080 rail cars of coal.

Pennsylvania environmental regulators issued the company notice of five potential violations of state law. As a precaution, the Federal Aviation Administration has restricted aircraft from within a 1-mile radius of the leaking well.

A written statement provided Friday by Equitrans spokeswoman Natalie Cox said “there are no immediate public safety concerns” and the company has been working with a specialty well services company to plug the leak, which was first reported Nov. 6.

The Rager facility is in Jackson Township, at the heart of the Marcellus Shale formation that has seen a boom in gas production since the introduction of hydraulic fracturing more than a decade ago. Residents living as far as four miles away from the leak told The Associated Press on Friday they could hear the roar of pressurized gas escaping from the well and could smell the fumes.

Tracey Ryan, who homeschools her two young children at her house about three miles away, said the air reeks of sulfur and the noise is so bad she has had trouble sleeping.

“When you’re laying in bed at night, it sounds like a jet plane taking off,” said the 39-year-old mother. ”It’s unreal, the noise that’s coming, and it’s constant. … Everybody just keeps telling us we’re safe. But it doesn’t feel safe if you can hear it and smell it.”

Methane, the primary component of natural gas, is colorless and odorless. But when the gas is processed for transport and sale, producers add a chemical called mercaptan to give it a distinctive “rotten egg” smell that helps make people aware of leaks.

Methane’s earth-warming power is some 83 times stronger over 20 years than the carbon dioxide that comes from car tailpipes and power plant smokestacks. Oil and gas companies are the top industrial emitters of methane, which, once released into the atmosphere, will be disrupting the climate for decades, contributing to more heat waves, hurricanes, wildfires and floods.

The new leak comes as the Environmental Protection Agency on Nov. 11 updated proposed new rules intended to cut methane and other harmful emissions from oil and gas operations.

The Rager facility has 10 storage wells with a total storage capacity of 9 billion cubic feet of natural gas. Equitrans announced Thursday the leak had been stopped when workers flooded the leaking well, but the hiss of venting gas returned early Friday morning.

Cox cautioned the estimate of 100 million cubic feet of natural gas leaking per day is preliminary and the company would be unable to provide an accurate account of the gas lost until an inventory verification study is completed.

The initial estimate would potentially put the Rager leak as smaller but comparable to the daily emissions from the worst uncontrolled gas leaks in U.S. history — a 2018 blowout at an Ohio gas well owned by a subsidiary of ExxonMobil and the 2015 disaster at the Aliso Canyon storage facility in California.

The citations issued against the company by the Pennsylvania Department of Environmental Protection include failures to properly maintain and operate the gas facility, creating a public nuisance and producing a “hazard to public health a safety.” The company was also cited for failing to provide state inspectors “free and unrestricted access.”

Lauren Camarda, spokeswoman for the state environmental agency, said that when members of a state emergency response team first arrived at the site on Nov. 7 they were initially barred from entering and told “access was restricted to critical personnel only.”

Cox said that when the state team arrived, Equitrans’ contractors were still in the process of implementing a safety boundary to avoid introducing a potential ignition source that could ignite the highly flammable methane leaking into the air.

The gas is coming from a vent designed to relieve intense pressures building up in the well and prevent a blowout. Cox said the company is now withdrawing gas from four storage wells to reduce the overall pressure in the field. Efforts to plug the leak were expected to continue through the weekend, including attempts to plug the well with concrete.

Edana Glessner, who runs a wedding venue 3.6 miles from the well site, said the smell was making her nauseous and impacted her business.

“You could hear it during the last wedding we had,” she said. “And it smelled, but everybody was OK with it. We said we’re really sorry.”