A cordoned-off street in Brighton Heights following a shooting on Oct. 28, 2022

6 people shot outside a funeral in Pittsburgh 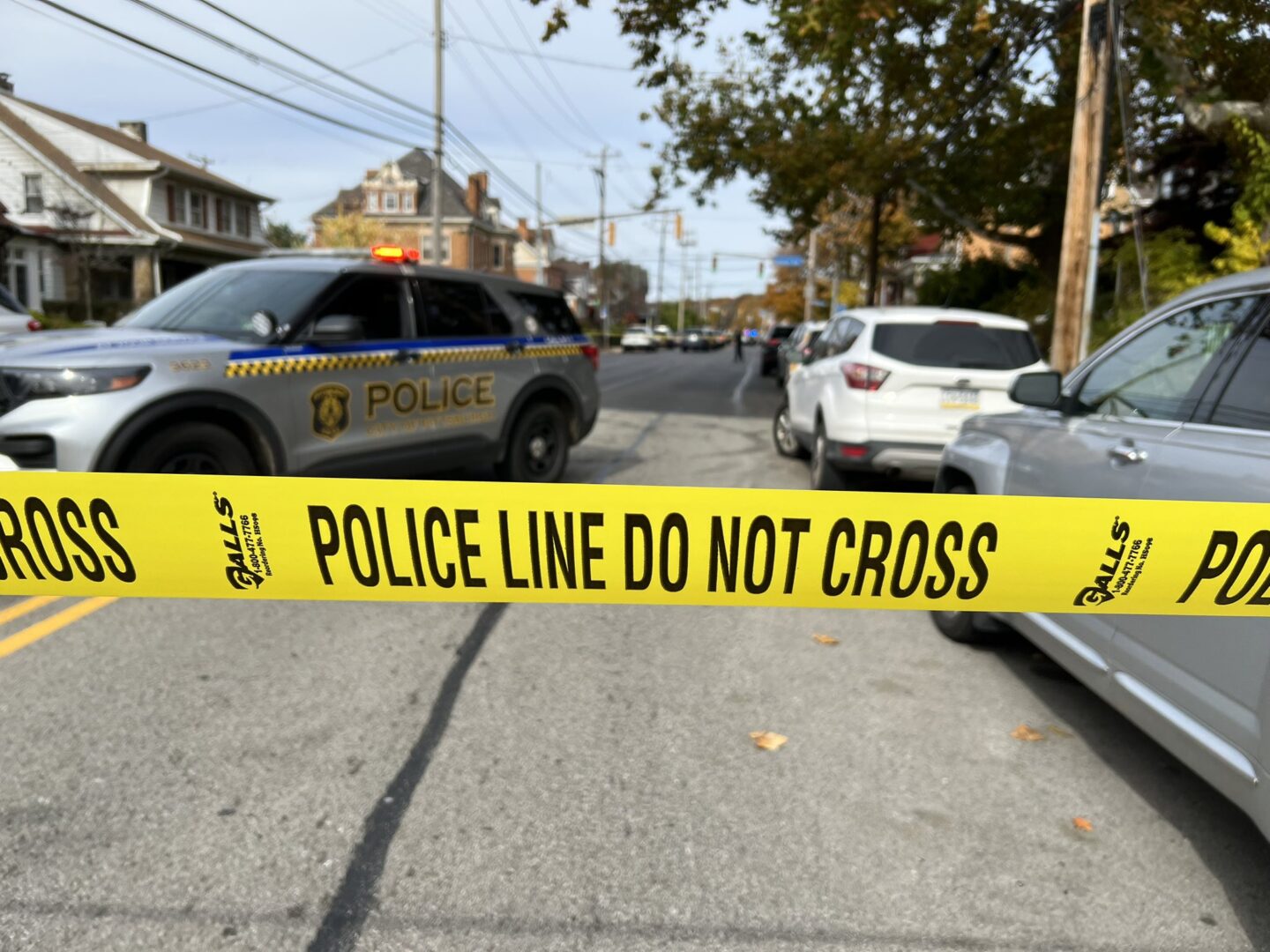 A cordoned-off street in Brighton Heights following a shooting on Oct. 28, 2022

Pittsburgh Police said six people were shot just after noon Friday outside a church in Brighton Heights where a funeral was underway inside for a man shot to death earlier this month on the North Side.

Five victims are being treated at Allegheny General Hospital, including one person who initially was listed in critical condition. All are in stable condition as of late Friday afternoon. A sixth person was taken to UPMC Children’s Hospital after the shooting, which Acting Police Chief Thomas Stangrecki termed “a horrendous incident.”

“We’re doing all we can to identify those responsible for this shooting and to hold them accountable,” Stangrecki said during a late-afternoon news conference near the shooting scene.

Also speaking near the church, Pittsburgh Mayor Ed Gainey called on residents who know information about the shooting to work with police investigating the incident.

“We need to make sure that this never happens again, and we will be working around the clock to do whatever’s necessary to apprehend those who did this heinous thing today,” Gainey said.

A former member of the state House of Representatives, Gainey also called on state lawmakers to enact stronger gun regulations.

“When we start getting tough on guns, then we get tough on crimes. Help us get these guns off the streets,” Gainey urged legislators in Harrisburg.

The funeral service was being held at the Destiny of Faith Church for 20-year-old John Hornezes, who was one of three people killed on Saturday, Oct. 15 in a shooting at the Sunoco gas station on Cedar Avenue in Deutschtown. Police identified the two others killed in that shooting as innocent victims and said Hornezes was the likely target. No arrests have been made in that shooting.

Police Cmdr. Richard Ford, who oversees the police major crimes unit, said there were multiple shooters involved. He added that police had reason to believe multiple people attending the funeral were targeted in the shooting.

Reports of the shooting at the church on Friday sent police from the city, Allegheny County and Pittsburgh Regional Transit departments as well as Allegheny County Sheriff’s deputies swarming to the neighborhood and nearby Allegheny General in response.

Police obtained video of the incident as well. Ford said they are investigating a motive in the church shooting Friday. Police will maintain a strong presence in the neighborhood through the next several hours, he said. Police would not release any information on suspects.

There’s been a shooting at Brighton Road and Benton Avenue at a nearby church. There are dozens of police vehicles surrounding the scene. This is in Brighton Heights. I heard multiple shots a little bit ago. pic.twitter.com/746acwPCyF

Pittsburgh Public Schools were scheduled for a half-day of classes Friday when the gunfire began. Police say they have alerted the schools that it is now safe to dismiss students.

Earlier, the department advised the public to avoid the area. Brighton Road is closed between Termon and Benton avenues.

The 3700 block includes the Destiny of Faith church, a senior-citizen high rise, a Rite-Aid pharmacy and multiple homes. 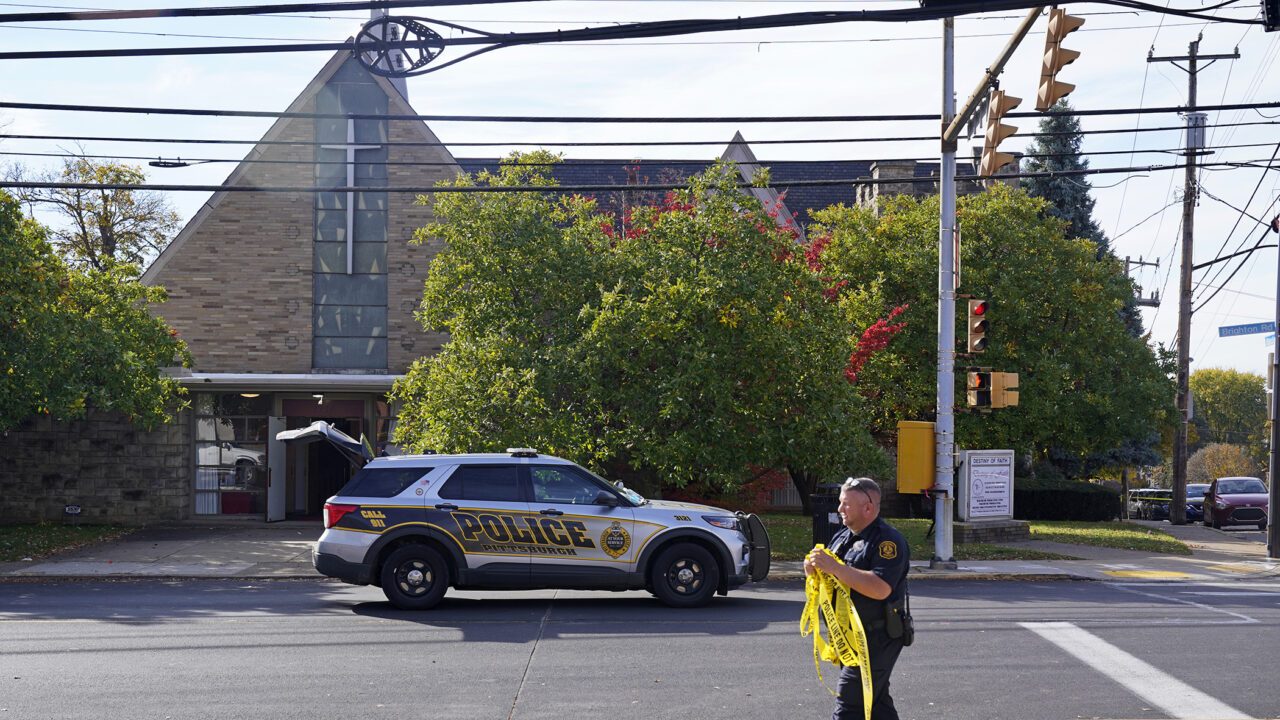 A Pittsburgh Police officer removes the Police Line barrier from around the scene outside the Destiny of Faith Church in Pittsburgh, Friday Oct. 28, 2022, where a shooting while a funeral was being held, left several people wounded. (AP Photo/Gene J. Puskar) 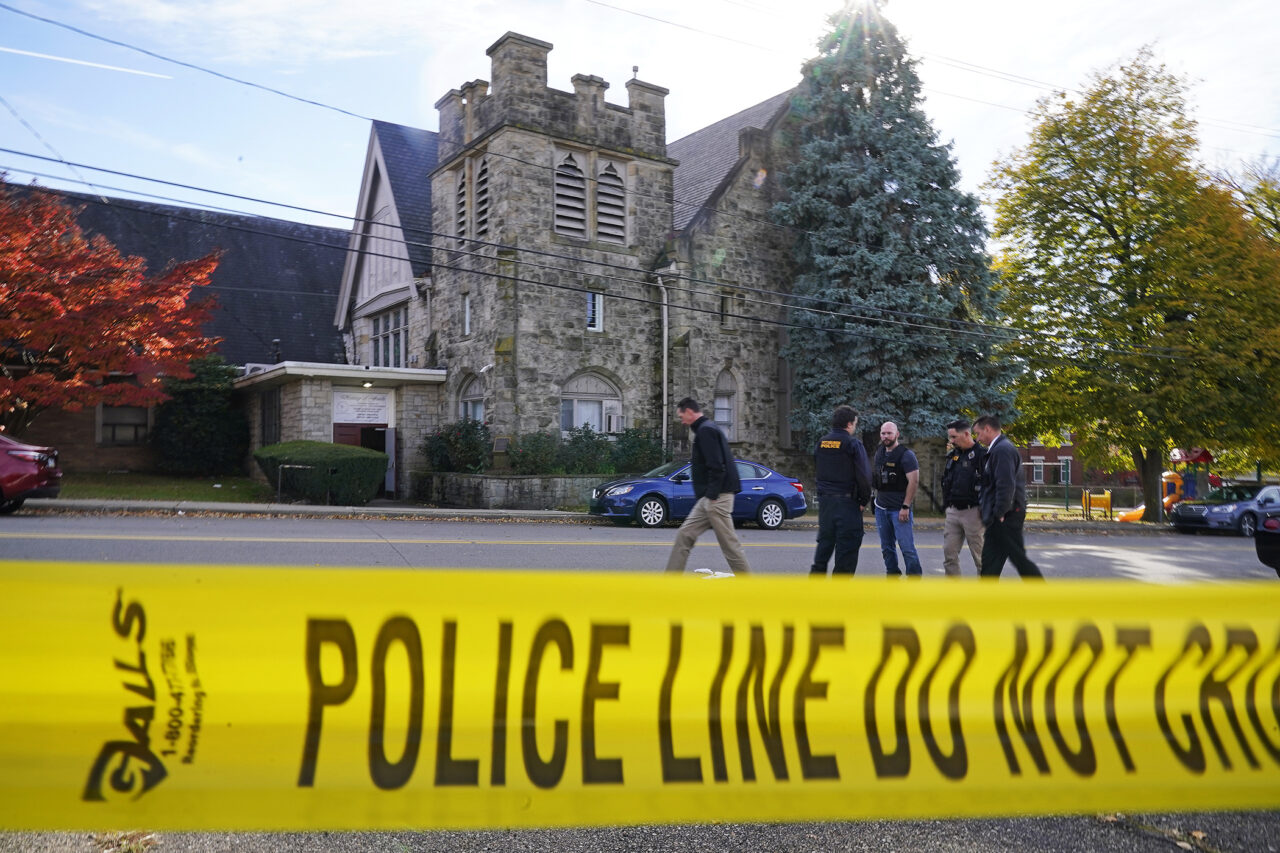 Police investigate the scene outside the Destiny of Faith Church in Pittsburgh, Friday Oct. 28, 2022, where a shooting while a funeral was being held, left several people wounded. (AP Photo/Gene J. Puskar) 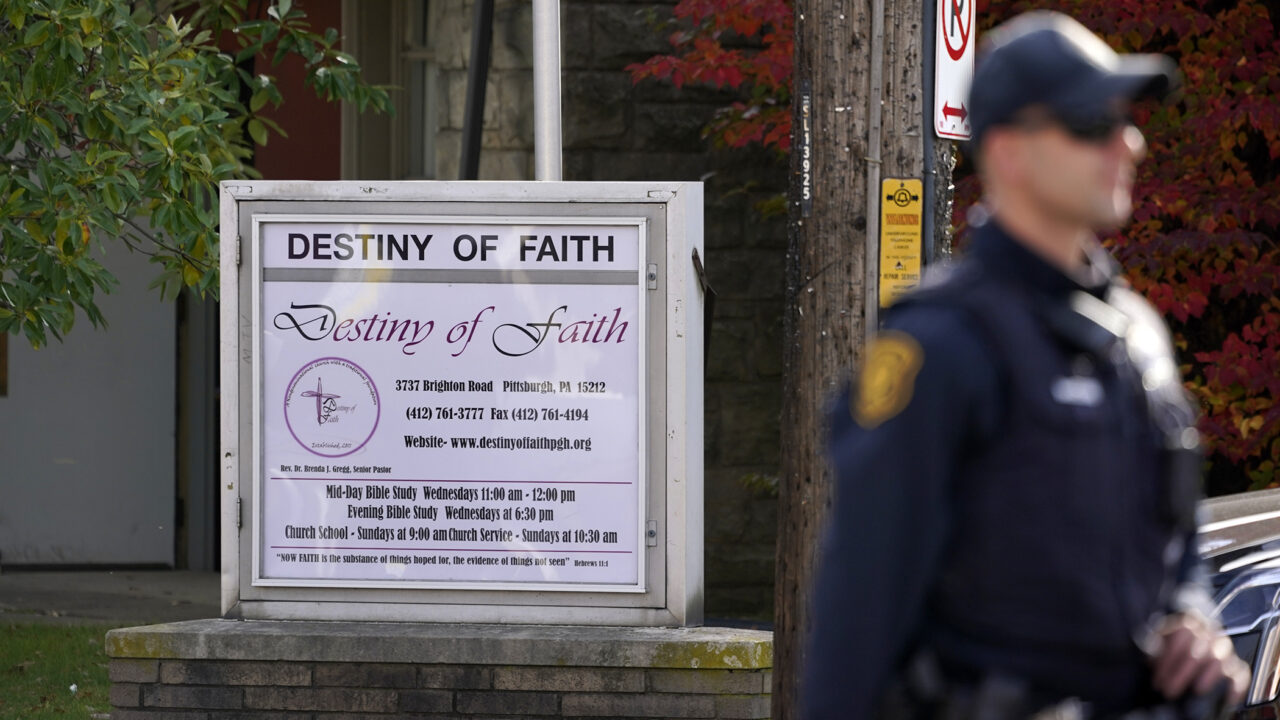 A Pittsburgh police officer stands outside the Destiny of Faith Church in Pittsburgh, Friday, Oct. 28, 2022, where a shooting while a funeral was being held, left six people wounded, including one person who was hospitalized in critical condition. (AP Photo/Gene J. Puskar) 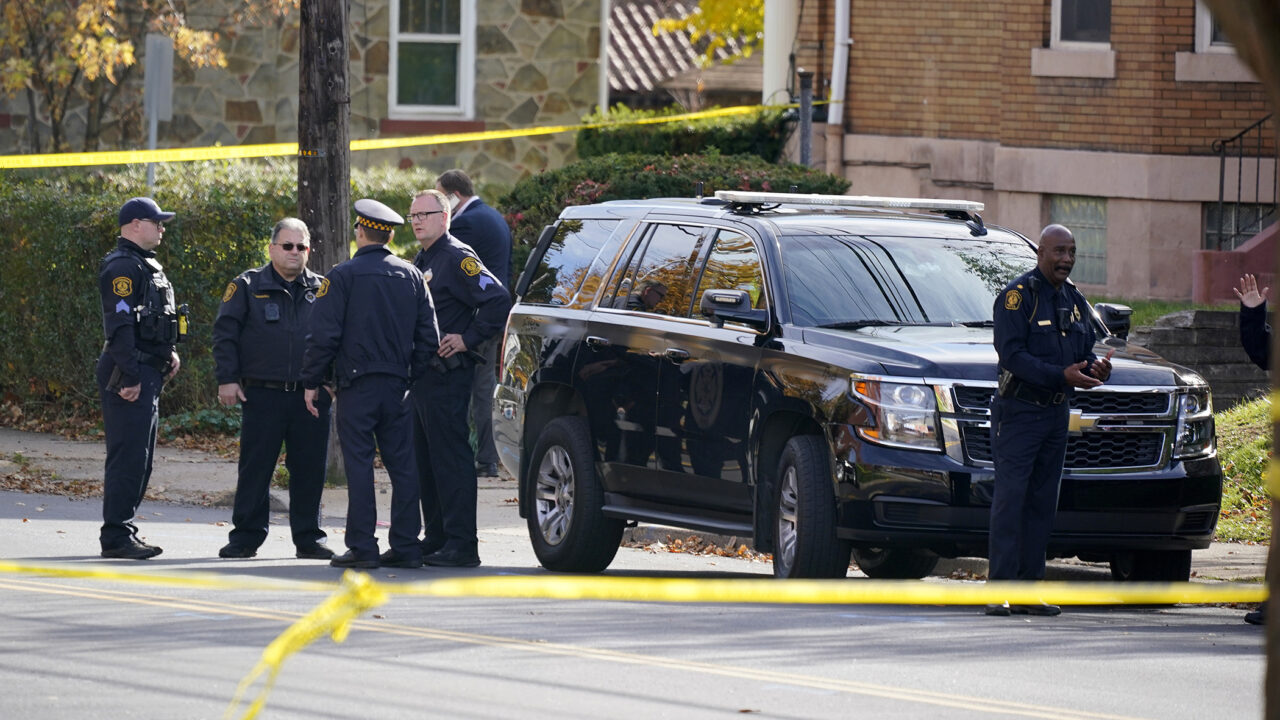 Pittsburgh Police gather outside the Destiny of Faith Church in Pittsburgh, Friday Oct. 28, 2022, where a shooting while a funeral was being held, left several people wounded. (AP Photo/Gene J. Puskar)

The Rev. Dr. Brenda J. Gregg. senior pastor of Destiny of Faith, said from where she stood inside the church at the time of the shooting, it was hard to tell whether gunshots were coming from the street or inside the sanctuary.

“This has been one of the most devastating days of my life,” Gregg said.

The church shooting Friday came one day after Pittsburghers gathered to remember the 11 people who died and honor the six people who were injured as well as the first responders who aided them after an antisemitic gunman invaded services at the Tree of Life Synagogue in Pittsburgh’s Squirrel Hill neighborhood.

This is a breaking news story and will be updated.

Ahead of the World Series, Phillies radio announcer Scott Franzke shares the art of play-by-play