GOP governors sent buses of migrants to D.C. — with no plan for what came next 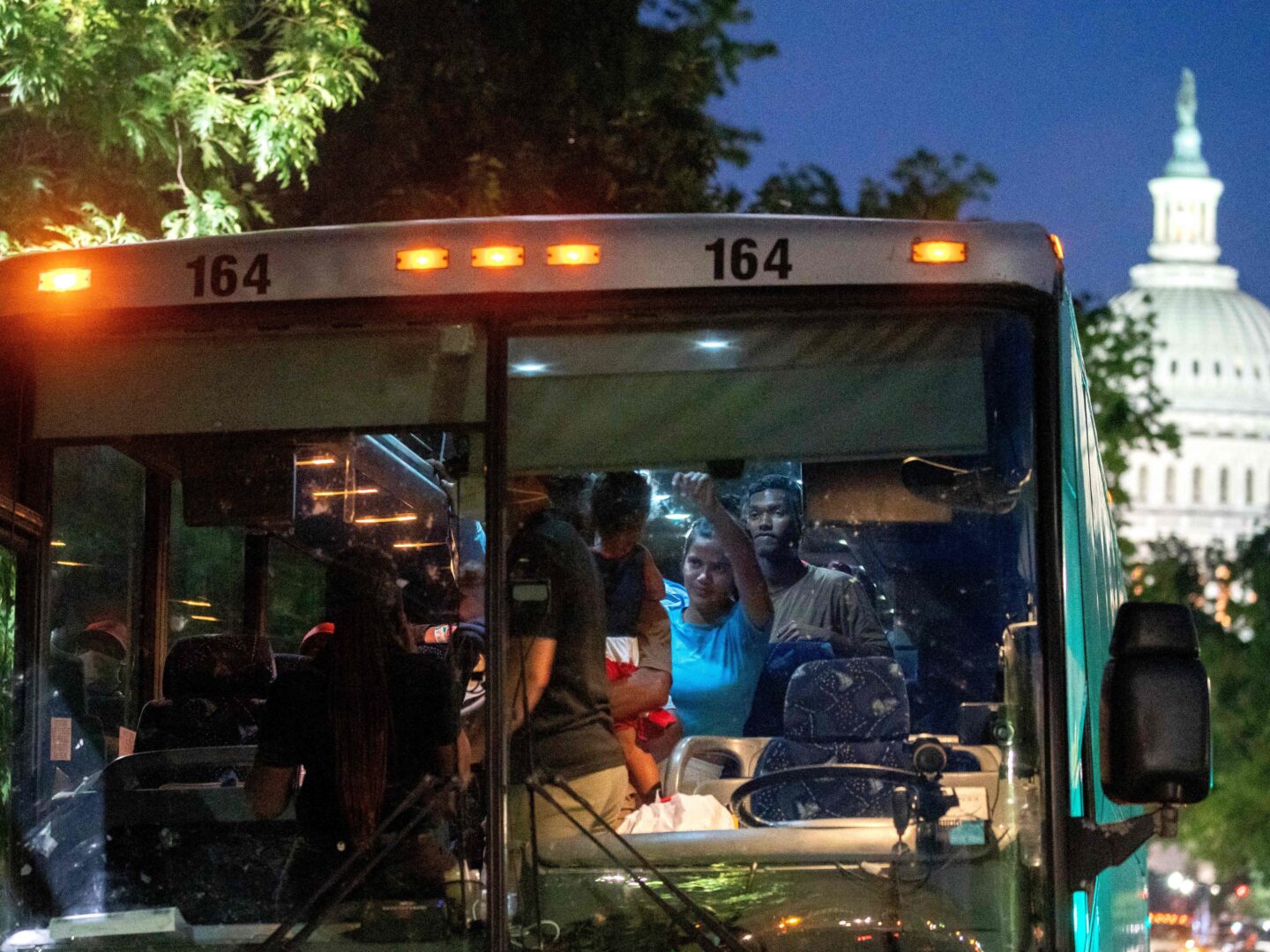 For months now, the governors of Texas and Arizona have been sending charter buses full of migrants and refugees to Washington, D.C.’s Union Station, just a few blocks from the Capitol building.

When they disembark, they find neither the local nor federal government there to meet them.

Texas Gov. Greg Abbott says he started sending the buses to D.C. because the Biden administration attempted to lift the pandemic-era emergency Title 42 order that allowed the U.S. to deny migrants entry.

According to Abbott’s office, more than 6,100 migrants have been bused to D.C. from Texas alone. They arrive six days a week, as early as 6 a.m. and as late as 11 p.m. — sometimes multiple buses each day. 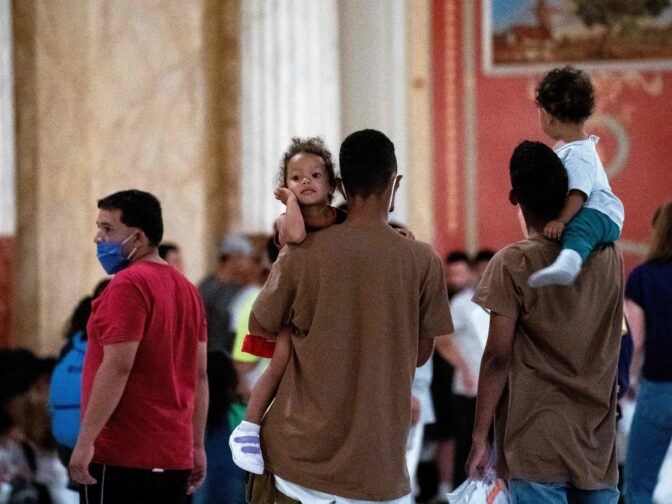 In response, D.C. Mayor Muriel Bowser says this is a federal issue that demands a federal answer. She and other local government officials secured a FEMA grant in June for an international nonprofit to offer emergency services to migrants.

So far, only local volunteers and nonprofit staff have greeted these buses at Union Station. Abel Nuñez is head of CARECEN, the Central American Resource Center, which stepped in to help people being bussed to D.C. when this all started.

“It was really crazy because they were just leaving them on the street,” said Nuñez, who first showed up at the station on April 16 after getting a tip from the D.C. Mayor’s Office on Latino Affairs that a bus was on its way.

“We knew it was on its way so we were there since 5 a.m. just waiting for them along with mutual aid organizations,” he said, adding that the first bus didn’t arrive till 8 a.m. “And it was incredible how shell-shocked these people were coming out of the buses.”

The organization soon learned that the migrants had been let out of immigration detention centers at the border and spent very little time — sometimes less than a day — at a shelter or nonprofit at the border before being put on the bus for a 36-hour journey. 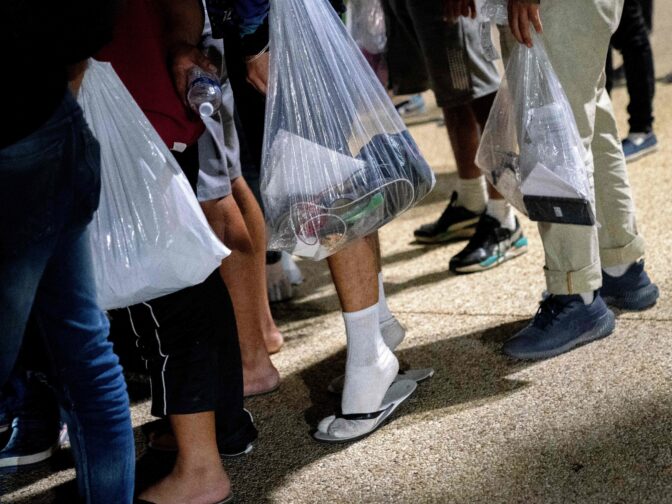 The federal government has to call up the D.C. National Guard because the district isn’t a state, and so far the government has not responded to her request. Additionally, some volunteers disagree with what they call a “militarized response” to the humanitarian crisis.

“The governor of Texas has pushed the respite work up to D.C. We’re not a border town so we are not used to doing this type of work,” Nuñez said. His organization has been helping migrants getting off the bus with meals, hygiene kits and a safe place to rest.

“For them, it was just a free ride,” Nuñez said. “They didn’t really have any other options and were offered a bus to the East Coast — Washington, D.C. — which some of them understood was closer to their final destination … so they were happy.”

But he added that with only local volunteers and nonprofit staff greeting the buses, and with no government support to greet them, the migrants were confused at the disorder that they found once they got to D.C.

“We have to recognize that the immigrants coming in were primarily from Venezuela, Nicaragua, Cuba… some folks from Central Africa … so they had [final] destinations such as Miami, New Jersey, New York or Tennessee [in mind],” Nuñez said.

“We need a place where we can receive them, give them a meal, and actually help them plan their next step. Even if that means staying in the D.C. area.” 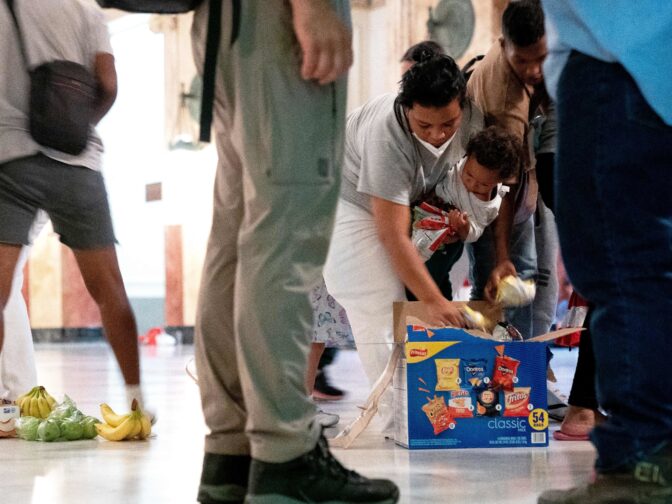 CARECEN has helped send some of the migrants to California or Texas, or wherever they have family or friends that can receive them. Still, aid volunteers say that about 10-15% of those who are dropped off by these buses have decided to stay in D.C. indefinitely.

One couple from Venezuela stayed at a volunteer’s home with their four children until their flight to Florida.

“Over there in Texas, when we were in the refugee camp, it was tougher because on the border there are military, so they treat the people like militants,” said Ronald, the husband. “I felt that we were in a better place. If we didn’t have her family I told her that we would stay here. We would stay in Washington.”

Critics — including some Republican state and local officials — have called Abbott’s plan to bus migrants to D.C. “political theater”. Still, Arizona Gov. Doug Ducey joined Texas and started busing migrants to the nation’s capital in May.

“I felt that he truly wanted to get a media hit out of this,” said Nuñez of Abbott’s move. “And that eventually two or three weeks later when everything would die down, he would stop doing it.” 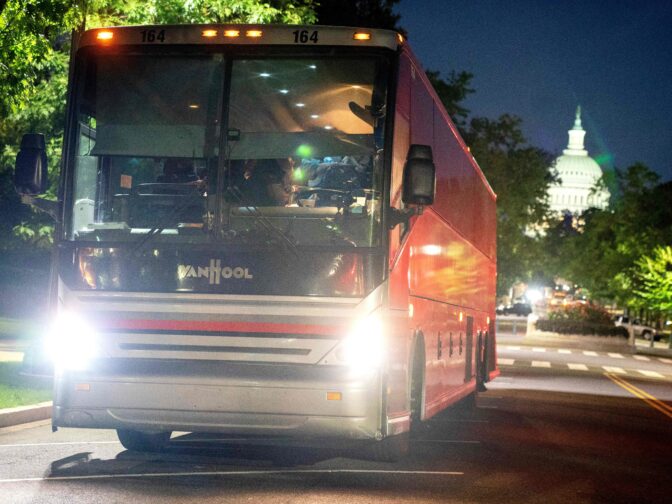 A bus from Del Rio, Texas, carrying migrants from Venezuela, sits near the US Capitol in Washington, DC, on August 2, 2022. – Since April, Texas Governor Greg Abbott has ordered over 150 buses to carry approximately 4,500 migrants from Texas to Washington, DC, to highlight criticisms of US President Joe Bidens border policy. (Photo by Stefani Reynolds / AFP) (Photo by STEFANI REYNOLDS/AFP via Getty Images)

When that didn’t happen, Nuñez said the community stepped in.

“I think this is an example where the local community rose up and said, ‘No, we are not going to have chaos in our city, we are going to be in solidarity with the people that are on the buses and help them to the best of our ability,'” Nuñez said. “Now we’re reaching our limit on that.”

But he added that resources from the city or from the federal government and other municipalities could really help. “I think we can do an amazing job of demonstrating to this nation what it is to really integrate newcomers into our communities.”