An election worker continues the process in counting ballots for the Pennsylvania primary election, Wednesday, May 18, 2022, at the Mercer County Elections Board in Mercer, Pa. Vote counting continues as Republican candidates Dr. Mehmet Oz and David McCormick are locked in a too-early-to-call race for Pennsylvania's hotly contested Republican nomination for an open U.S. Senate seat. (AP Photo/Keith Srakocic)

Pennsylvania primary voters turned out in record numbers. Here’s what drew some of them to the polls.

Whether the high-profile races for governor and U.S. Senate motivates voters to turn out this fall is an open question. 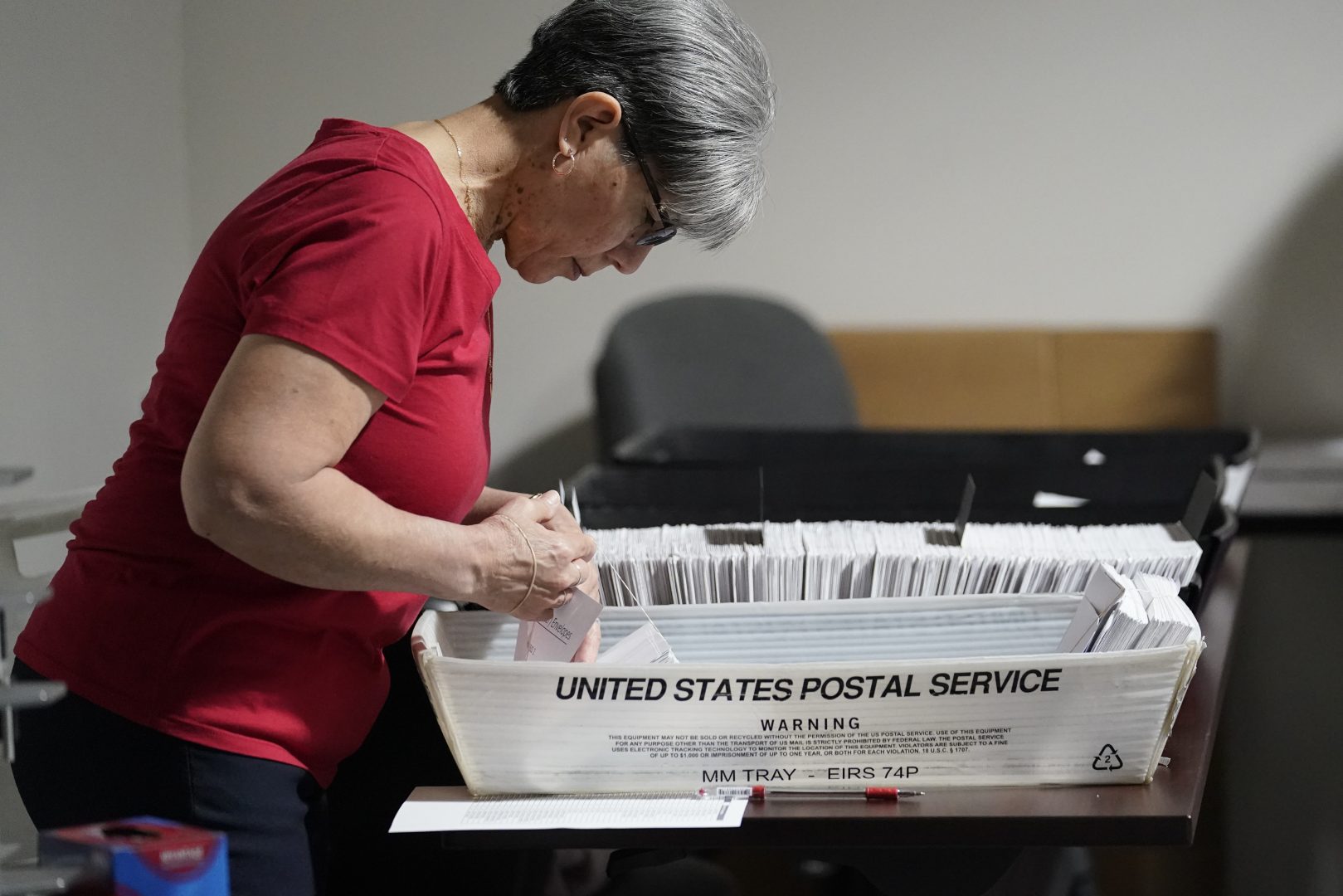 An election worker continues the process in counting ballots for the Pennsylvania primary election, Wednesday, May 18, 2022, at the Mercer County Elections Board in Mercer, Pa. Vote counting continues as Republican candidates Dr. Mehmet Oz and David McCormick are locked in a too-early-to-call race for Pennsylvania's hotly contested Republican nomination for an open U.S. Senate seat. (AP Photo/Keith Srakocic)

Clarification: We added a line to the story noting Peters spoke to WITF as a voter, and not as a representative of her employer.

Pennsylvania voters appear to be highly-motivated ahead of the midterm elections in November.

Turnout in last month’s primary was the highest for both Republicans and Democrats since 2002, according to the latest data from the Department of State. Despite anti mail-in ballot messaging by some high-profile Republicans, around 125,000 GOP voters statewide submitted their votes through the postal service. An even higher number of them used absentee ballots.

Whether they will return in similarly-high numbers this fall is an open question. But against a backdrop of two nationally-spotlighted races, four primary voters WITF spoke with said they’ll be part of the democratic process on Nov. 8.

Almost 400,000 more Democrats voted by mail or absentee ballot than GOP voters. The trend illustrates a wide partisan rift on the method as well as the effect of Republican-led messaging falsely asserting mail-in ballots are neither secure nor trustworthy. 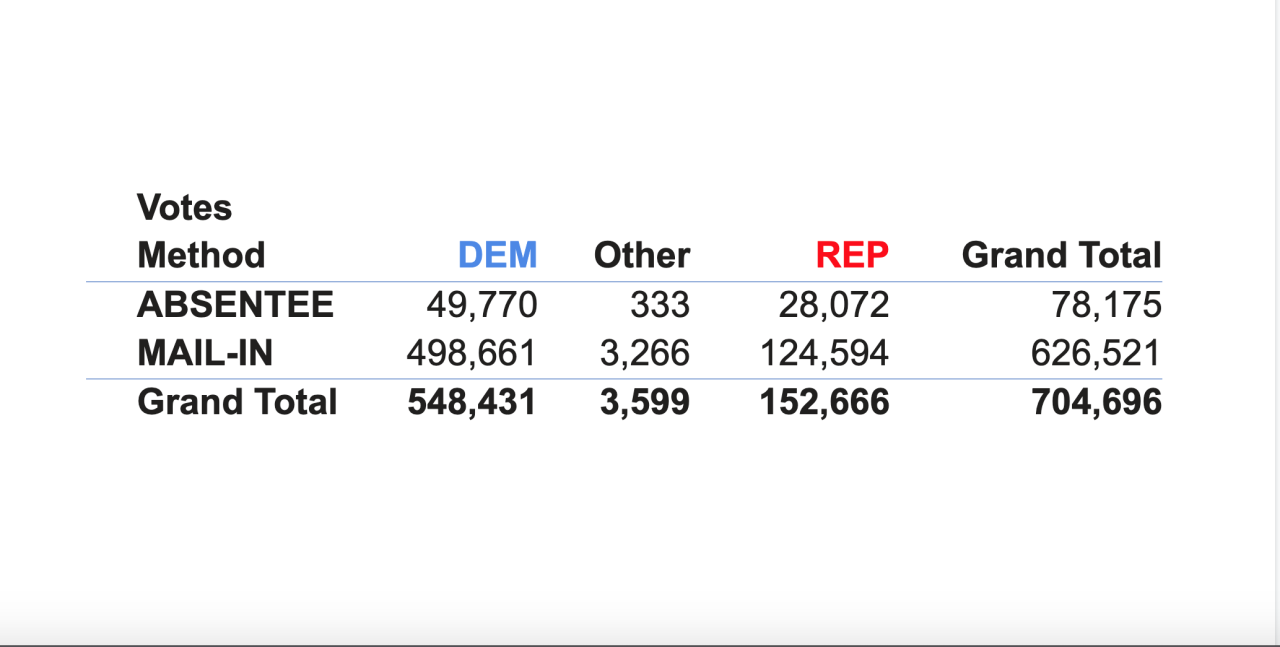 via Department of State

“Clearly what our elected leaders say matters. It matters how people talk about this,” said Berwood Yost, Franklin and Marshall College’s Center for Opinion Research Director.

Around 39 percent of GOP voters and 32 percent of Dem voters turned out statewide for an average of around 36 percent. In the 2018 midterms, average turnout was closer to 21 percent.

“Our turnout, this time, was higher than typical,” said Yost. “That said, this was not a typical election.”

For the first time in decades, party faithful got to weigh in on who should represent them in open races for the U.S. Senate and governor. The high-profile contests brought in a large number of candidates in both parties and attracted around $75 million in candidate and party contributions, according to data gathered by Open Secrets.

Interest in both races may have caught the attention of more voters. But Yost cautioned it’s too early to forecast a high turnout in the Nov. 8 election.

Midterm elections typically have lower turnout than presidential ones. Historically, around 40 percent of registered Pennsylvania voters on average have taken part in elections held midway through a presidential term. 57 percent have cast a vote when the commander in chief is on the ballot, according to Department of State data dating back to 1960.

Plus, only Republican and Democratic voters can participate in Pennsylvania’s primaries – and even they don’t fully participate. Last May, only about 70,000 more GOP faithful turned out than Democrats. Nearly five million Republicans and Democrats  – and more than one million others who couldn’t vote because they aren’t members of either party – stayed home.

“Every election is its own thing. And we don’t know what the context on the ground will be come November,” he added.

WITF reached out to ten primary voters and spoke with four. Three of them were Democrats who voted in they May primary and a fourth was a Republican. One lives in Western Pennsylvania, the other three in the central part of the state.

Republican Joel Sears is a school board member at York Suburban School District. When asked what drove him to the polls last month, he said casting a ballot is a civic responsibility for him.

Sears said all candidates should be talking about a long-time hot button issue in the Commonwealth: property tax burdens, which vary widely from county to county.

According to the most recent expenditure data gathered by Pennsylvania’s Department of Education, property owners in and around York have to pick up about 60 percent of school district expenses each year. By law, the state is supposed to share that burden with districts – a requirement that’s currently being litigated in state court.

As a school board member, Sears said he’s seen the imbalance first-hand.

“It’s just crazy. It’s an economic death spiral. I don’t hear anybody at the state level talking about this,” he said.

“The right way to go is for the state government to face the music and dance. Namely, increase the broad-based taxes so that some of these other obligations can be relieved from taxpayers, especially the school tax burden,” Sears added.

“These are the kind of things that are going to wake people up,” he added.

Democrat Katrina Peters, a paralegal who does contract work for Dauphin County’s Children and Youth agency, said voting represents a chance to have her voice heard. She emphasizes she is speaking as a voter and not for the agency.

“I vote in every election regardless. It’s so important. But this time, it feels like it’s higher stakes,” she said.

Peters, who WITF spoke with before the U.S. Supreme Court ruled in the Dobbs vs. Jackson Women’s Health Organization abortion case on Friday, said reproductive health tops her list of concerns. 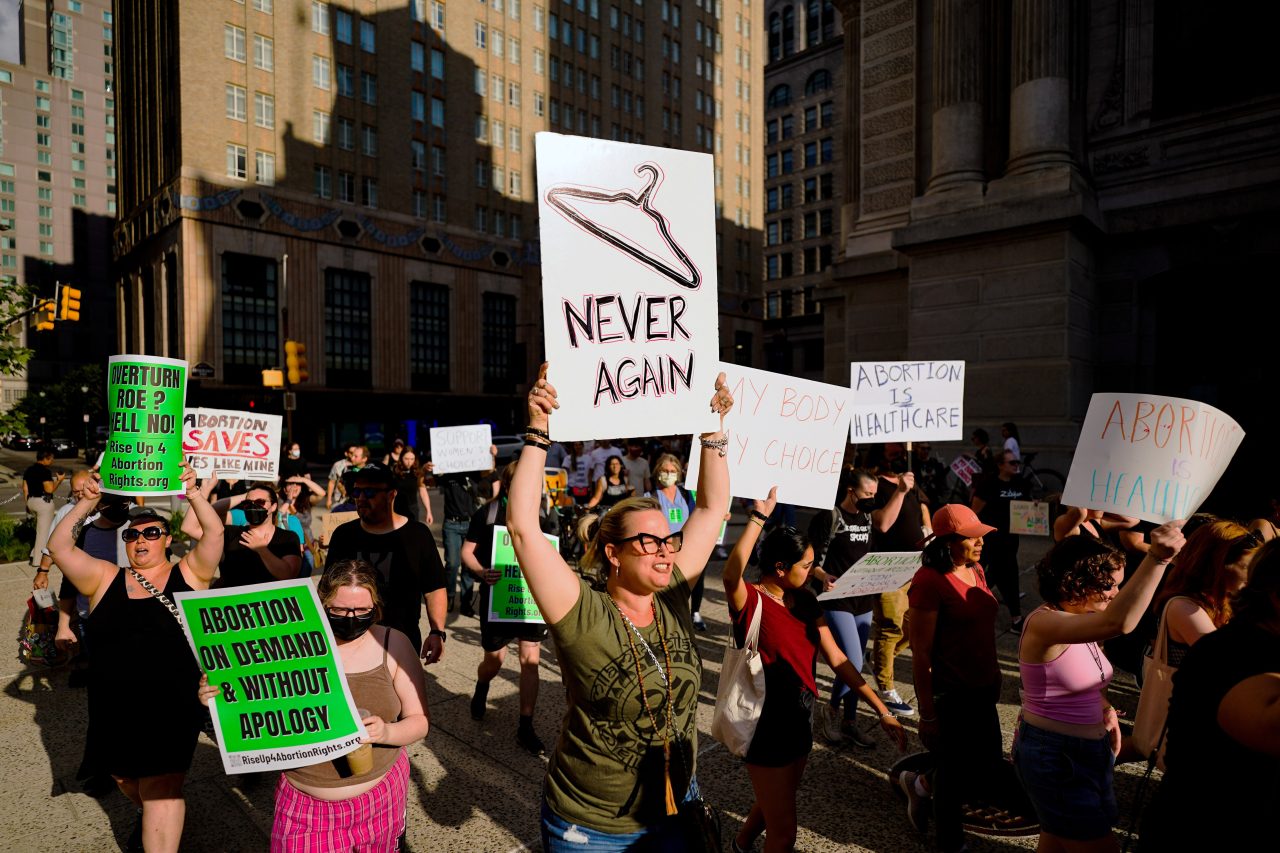 “I care very deeply about this, as I am a woman of child-bearing age. It is important to me,” she said. “I also work directly with a lot of people who don’t have access to those kinds of means and I don’t think people discuss it enough.”

Sixty-one percent of 941 adults surveyed from across the country said the overturning of federal abortion protections will motivate them to vote in November, according to an NPR/Marist poll released Monday.

Peters said she also wants candidates to be talking about a host of other issues.

“Gun legislation. Mental health. Our educational system. Those are definitely the issues I need them to be talking about on both sides. I want to hear both sides of that argument,” she said.

“Believe it or not, I kind of want to hear what Doug Mastriano [the GOP candidate for governor] has to say about all these things,” Peters added. “I probably am not gonna love it, but I need to hear it. I need to know.”

Democrat David Roach, a graduate student at the University of Pittsburgh, also cited abortion as a motivating factor for him.

“It’s not my right to dictate what someone else does with their body,” said the graduate student at the University of Pittsburgh. “I think that not voting would have been even more of a disservice to my friends and family who would be affected by some of the policies that some of the candidates want to enact.”

Roach said he was referring to state Sen. Doug Mastriano’s campaign for governor and his promise to approve a ban on abortion after six weeks of pregnancy.

He said another policy idea —  legalizing recreational marijuana — matters to him. Pennsylvania remains a tough-on-pot state while neighbors like New York and New Jersey have both moved to legalize the drug.

Roach said to get his vote, anyone who supports legalization should also back criminal justice changes, too.

“[We should be] expunging criminal records of people who are in prison for marijuana charges. You can’t make it legal for people to currently do it if people are in jail for those same offenses,” he said. 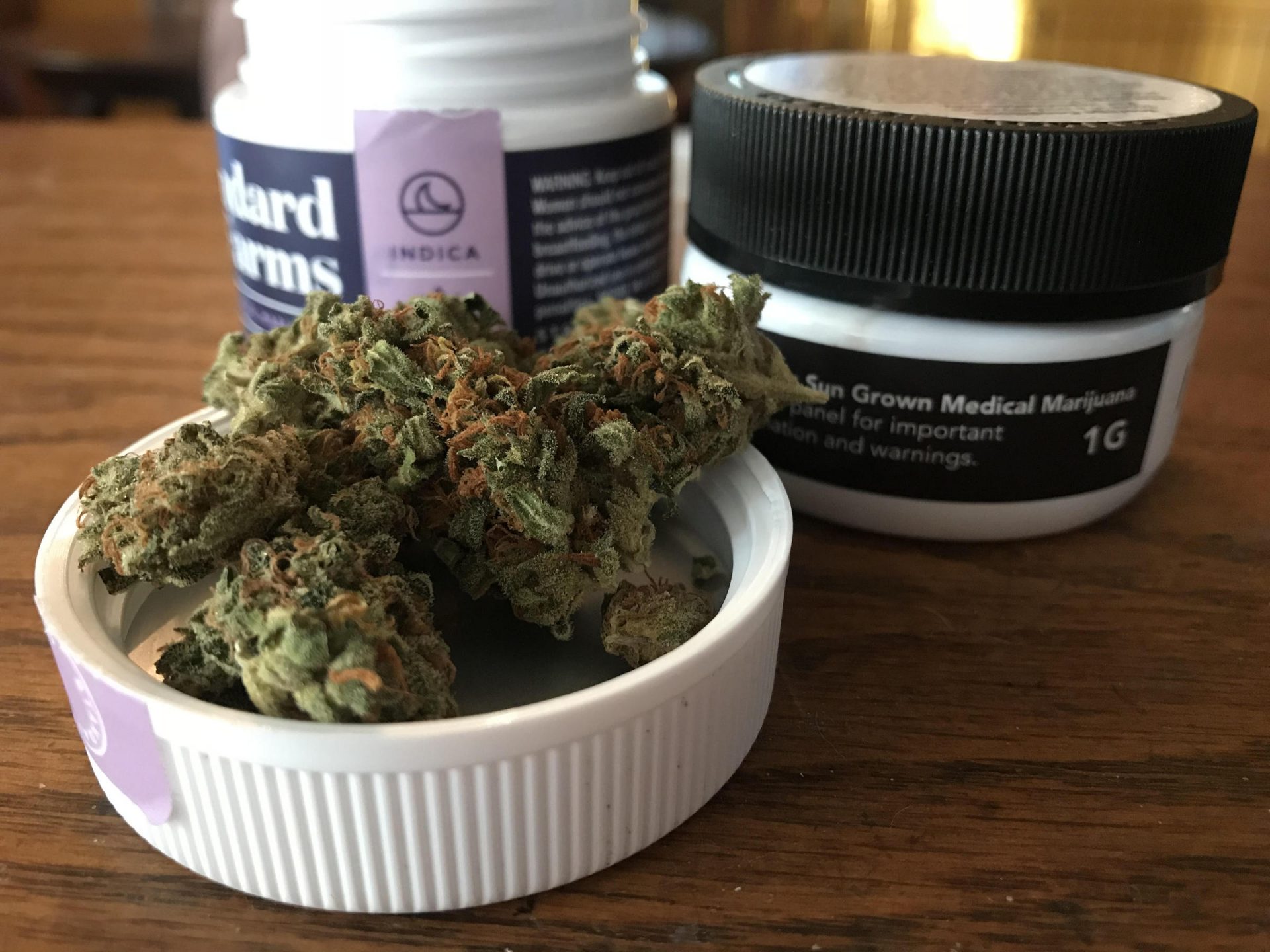 Sears, the Republican school board member from York County, said he opposes legalization – but noted Roach has a point.

“Let’s say there is an amnesty, but more importantly, it would not be considered a felony any longer. Well, I don’t have any problem with that. It doesn’t take legalization to decriminalize it,” Sears said.

All four voters who spoke with WITF said they feel the same way when it comes to how the state’s leaders are tackling the issues of the day. Pollster Berwood Yost said it’s a sentiment he’s seen in recent surveys conducted by his group.

“A sizable portion of people are just not happy with the way our politics is practiced, with its divisiveness, and they are also unhappy with the gridlock they see,” Yost said.

The approach Pennsylvania’s elected leaders use to claim or hold power are disappointing to  Democratic voter Terry Woodnorth of Lebanon.

“I don’t see any sign of breaking that cycle where the whole goal is always to win, as opposed to what’s best for our country,” Woodnorth said. “But I think this is the best system that has the potential for solving those kinds of problems.”

“Stop the negativity. Stop the flame-throwing. Take an issue. Unpack it. Explain it, and tell me what you’re going to do.”

As the nation is confronted with issues ranging from the economy to foreign policy, the Keystone State will again be in the national spotlight in November.

The U.S. Senate race could tip the balance of power in that chamber. The governor’s contest will decide whether Republicans will control two of the three branches of state government or whether they’ll have to work with another Democrat.

Members of Sam’s Capitol News Chatter texting club helped inform this story. WITF reporters are each hosting their own clubs through Subtext to better connect with our audience.