About 80 people protested the end of Roe v. Wade at the Pennsylvania State Capitol on June 24.

Gov. Tom Wolf says he isn’t entertaining any new restrictions. But that could change when he leaves office. 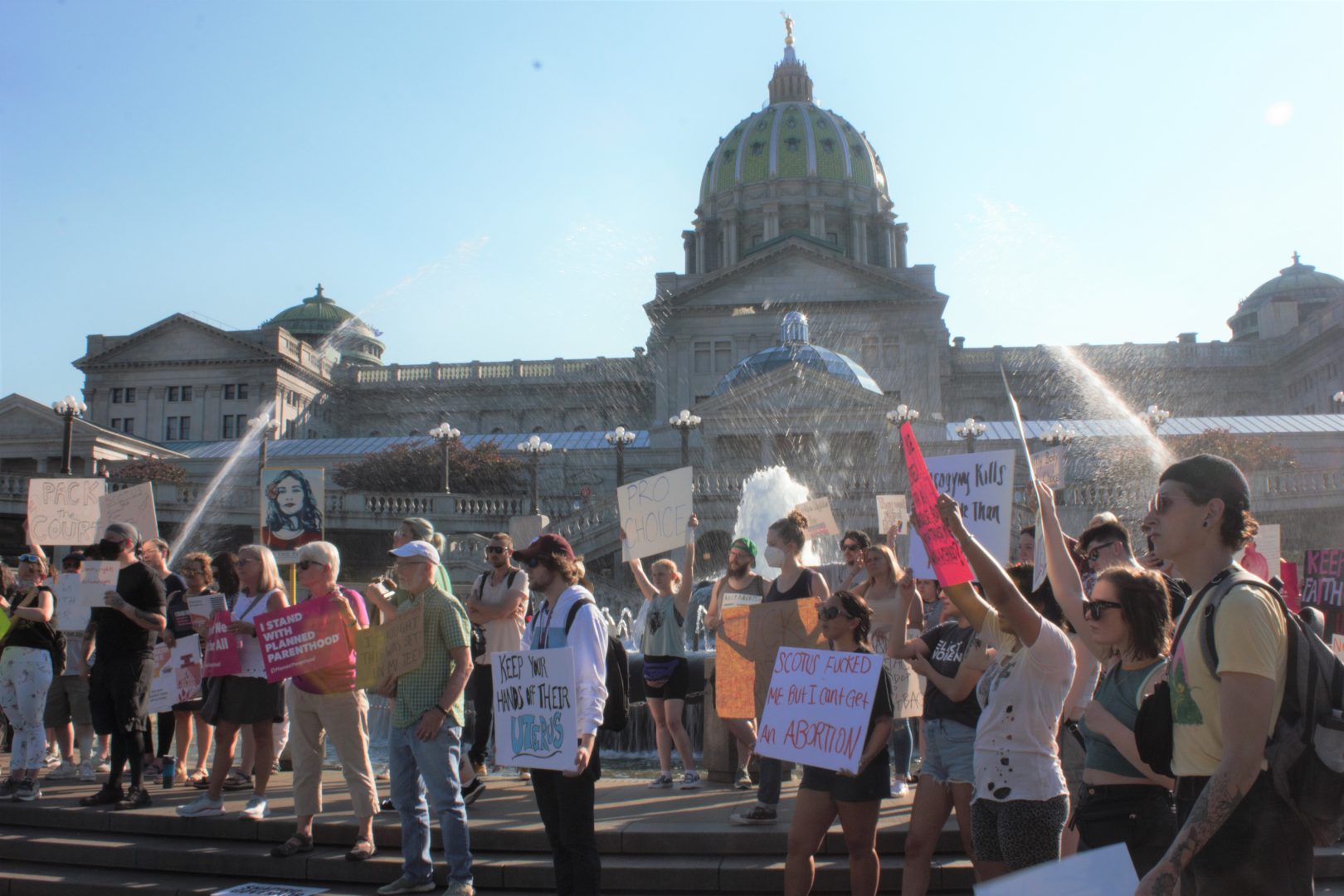 About 80 people protested the end of Roe v. Wade at the Pennsylvania State Capitol on June 24.

This story has been updated to more accurately reflect the nature of the two constitutional amendment proposals.

Pennsylvania’s current abortion law appears to be staying in place for now. Gov. Tom Wolf has repeatedly said he’ll veto any new restrictions on the procedure. It is currently allowed during the first and second trimesters of pregnancy

But they have kept up a steady stream of proposals. Friday’s U.S. Supreme Court decision overturning federal abortion protections has renewed conversations around them.

GOP lawmakers have offered seven bills to restrict abortion or public funding for the procedure since the start of last year. Another five from Democrats would expand access.

Under some Republican-backed measures, women would not be able to get abortions after six weeks of pregnancy or solely based on a fetal Down Syndrome diagnosis. Others would change the state constitution to remove any legal right to the procedure.

Pennsylvania is one of 14 states that directly fund such groups, according to a report from women’s rights advocacy group The Alliance.

“[We want to] ensure that every woman in Pennsylvania gets help and assistance for her children,” Gallagher said.

“I believe women deserve better than abortion. Abortion does not solve problems. It only creates more problems,” she added.

“We are funding centers that claim to help with abortion care and they end up being centers that do not offer any medical guidance or procedure for family planning,” Shusterman said.

Currently, women in Pennsylvania can have an abortion before they hit 24 weeks of pregnancy.

State-sponsored health insurance will cover the procedure, but only if the life of the mother is in danger or if a pregnancy resulted from rape or incest.

Most neighboring states have similar protections, but Ohio’s legislature wants a court to lift a stay on legislation banning abortion after six weeks. West Virginia’s state constitution does not offer the right to an abortion.

What happens in 2023 depends on who wins the Governor’s mansion this fall. The Republican candidate, state Sen. Doug Mastriano (R-Franklin), wants abortion banned after six weeks of pregnancy. Democrat Josh Shapiro, the current state Attorney General, would keep the current law in place.

Even if Shapiro wins, some Republicans say they’ll push for installing “sanctity of life” protections in the state constitution.

Two such proposals are currently pending. If lawmakers pass them this year and again next year, voters could weigh in on abortion restrictions as early as the spring.

“We’ve had several people from Texas. People will travel if they have family or friends that they can stay with, “ Reed said.

To prepare for the end of Roe v. Wade, the reproductive health provider has been expanding access at its clinics in Warminster, Bensalem, Wilkes-Barre, Allentown, York and Reading.  They are also opening a new site in Lancaster later this year. The group is also providing abortion via telehealth and mailing abortion medication directly to patients.

“This decision will make abortion harder or impossible to access for some state residents, and the need for travel would increase the ultimate cost. The biggest call to action at this time is donating to local abortion funds.”

Pennsylvania has 22 abortion providers. Nineteen of them are east of Harrisburg, the Philadelphia Inquirer reported.

“We’re devastated and we’re angry about this unjust decision and how it will really harm people across the nation, but we are laser focused on being here for anyone who needs abortion care in Pennsylvania,” Reed said.

House and Senate Republicans said Friday’s court ruling allows states like Pennsylvania to be the ultimate decider on abortion. While a change isn’t likely anytime soon, the House GOP signaled it stands ready to pursue further restrictions when the time is right.

“This ruling presents a necessary opportunity to examine our existing abortion law, and discussions around possible changes are already underway,” the caucus said in a statement.

Senate Majority Leader Kim Ward (R-Westmoreland) signaled she supports the current constitutional amendment proposals. Both would prevent any right to abortion from taking root in the state constitution. Senate Republicans said the legislature would still be allowed to regulate the procedure if voters approved the idea. West Virginia voters approved a similar move in 2018.

“Pennsylvania’s current law will remain intact until the governor is willing to work with the legislature in a bipartisan manner, or the legislature passes a constitutional amendment that gives the citizens the opportunity to pass a sanctity of life measure via the ballot,” Ward said.

“A majority of Pennsylvanians support access to safe health care, but, sadly, the political reality is that Republicans are more worried about the special interests than people,” the Hose Democratic caucus said in a statement.

Senate Democrats added they’re worried other rights that the Supreme Court granted under the 14th Amendment are under threat.

“Instead of stripping women of their rights and opening the door for others to lose fundamental rights as well, Senate Democrats will use our positions to identify real health challenges and solutions for women in this Commonwealth,” they said.

“Right-wing extremists have been strategically planning to dismantle decades long decisions to further their agendas and divide our country with policies designed to infringe upon our freedoms,” Wolf said. “They have done so one vote at a time, one election at a time across our beloved nation. We cannot allow this to continue.”

The two-term Democrat also suggested those who live in states with more restrictive abortion laws could seek the procedure in Pennsylvania.

“I vow to protect abortion access and reproductive health care in Pennsylvania,” he said.  “To women and pregnant people in surrounding states and across the country where this isn’t the case, you are safe here in the commonwealth.”

This is a devastating day in America.

A woman’s right to choose now depends on the state in which she lives, and the decision will be made by our next Governor.

Doug Mastriano will ban abortion with no exceptions.

I will keep abortion legal. https://t.co/a2dZY1Od2T

It is unjust. It is wrong. And I’m going to fight it with everything I’ve got.

Send me to the U.S. Senate, and I’d *proudly* vote to codify Roe v. Wade into law.

With accounts flush, budget talks in Pennsylvania come down to schools aid