An image of former President Donald Trump is displayed as the House select committee investigating the Jan. 6 attack on the U.S. Capitol continues to reveal its findings of a year-long investigation, at the Capitol in Washington, Tuesday, June 21, 2022.

Who you’ll hear from and what to expect in today’s Jan. 6 House committee hearing 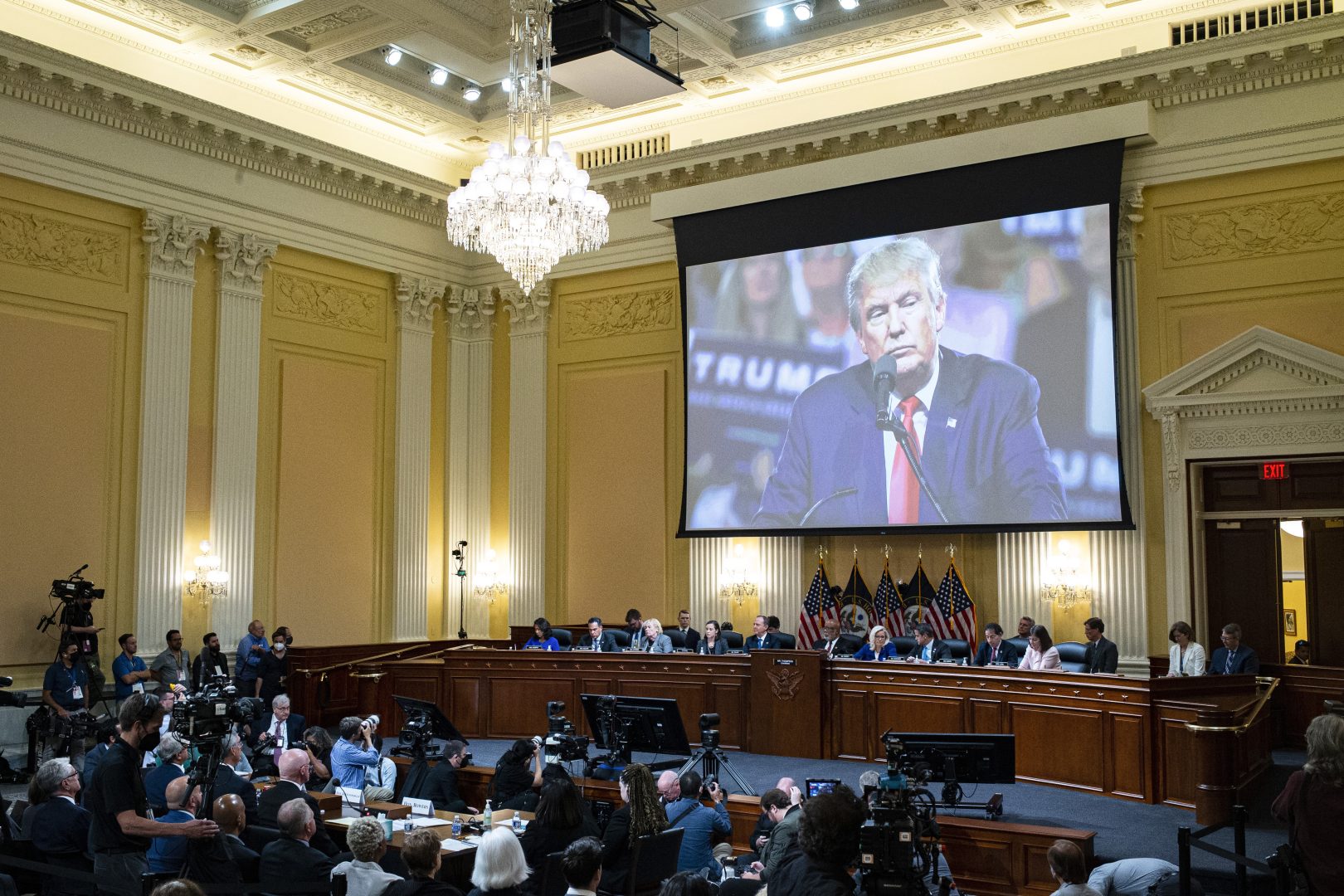 An image of former President Donald Trump is displayed as the House select committee investigating the Jan. 6 attack on the U.S. Capitol continues to reveal its findings of a year-long investigation, at the Capitol in Washington, Tuesday, June 21, 2022.

The fifth hearing of the House select committee investigating the Jan. 6 insurrection at the Capitol will focus on former President Donald Trump’s pressure on the Department of Justice to help him overturn the 2020 election.

Rep. Adam Kinzinger, one of two Republicans on the committee, will lead Thursday’s hearing, set for 3 p.m. It is expected to last roughly two hours like previous hearings.

This hearing was supposed to take place last Wednesday but was postponed for what panel member Rep. Zoe Lofgren, D-Calif., called “technical issues.” 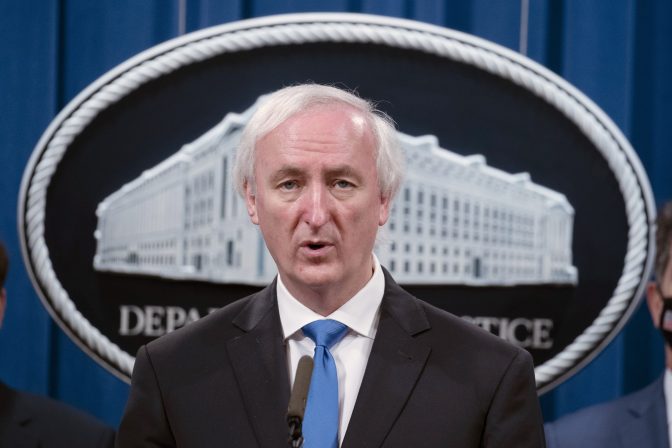 In this Sept. 16, 2020 file photo, then Deputy Attorney General Jeffrey Rosen speaks at the Justice Department in Washington. President Donald Trump urged senior Justice Department officials to declare the 2020 election results “corrupt” in a December phone call. That’s according to handwritten notes from one of the participants in the conversation. The notes of the Dec. 27 call were released Friday by the Democratic-led House Oversight Committee.

Acting Attorney General Jeffrey Rosen and former Acting Deputy Attorney General Richard Donoghue are among Thursday’s witnesses. Both refused to give in to Trump’s efforts to get the DOJ to advance his fraudulent claims of voter fraud and overturn the election.

When former Attorney General Bill Barr announced his resignation in December 2020, Trump badgered Rosen and Donoghue in at least nine calls and meetings, according to a report by the Senate Judiciary Committee.

“Just say the election was corrupt and leave the rest to me and the Republican congressmen,” Trump told the two men, according to their testimony.

Also to appear in Thursday’s hearing is Steven Engel, who headed DOJ’s Office of Legal Counsel. Engel was one of the officials who told the former president he would have no choice but to quit if Trump replaced the acting attorney general with environmental lawyer Jeffrey Bossert Clark. Clark was reportedly more willing to go along with Trump’s fraudulent claims of a stolen election.

Several other DOJ lawyers, including Donoghue, also threatened to quit if Clark was appointed.

“The President said ‘Suppose I do this. Suppose I replace him, Jeff Rosen, with him, Jeff Clark. What do you do?’ And I said ‘Sir, I would resign immediately. There is no way I’m serving one minute under this guy, Jeff Clark,'” Donoghue said in a piece of video testimony played at Tuesday’s hearing.

Clark appeared before the House committee in February for a deposition, but pled the Fifth dozens of times.

It’s unusual for DOJ lawyers at this level to testify in public about interactions with the White House, but President Biden said that executive privilege should not apply to conversations involving Trump’s efforts to overthrow the 2020 election. 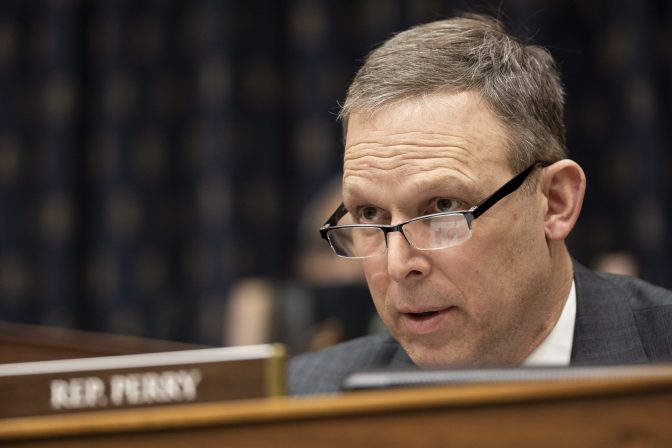 Perry described Clark as, “the kind of guy who could really get in there and do something about this.”

Republican Congresswoman Liz Cheney, vice chair of the committee, said Perry was one of numerous Republicans who sought presidential pardons for their roles in trying to overturn the election.

The lawmaker is running for re-election in the 10th Congressional District, which includes portions of Cumberland, Dauphin and York counties

How Trump pressured the DOJ

The committee plans to outline several ways in which Trump pressured the DOJ and tried to use it for his own personal agenda.

Committee aides said in a call with reporters that the hearing will lay out how Trump wanted the DOJ to publicly state there was election fraud. More testimony from Barr and other officials is expected.

The committee will also show how Trump asked the DOJ to file lawsuits with his campaign on behalf of his election fraud claims. He also pressured the DOJ to appoint a special counsel to look into his claims and he wanted it to issue letters to states to question the sanctity of their elections.

Thursday’s hearing will also detail a Jan. 3 meeting in the Oval Office between Trump and senior DOJ officials as the former president tried to place Clark as the head of the department. 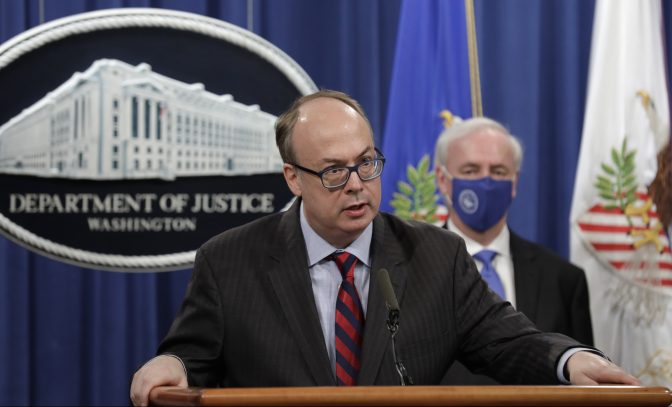 Acting Assistant U.S. Attorney General Jeffrey Clark is under scrutiny for his role in former President Donald Trump’s efforts to overturn his 2020 election loss. In this file photo, Clark is shown next to Deputy Attorney General Jeffrey A. Rosen during a news conference to announce the results of the global resolution of criminal and civil investigations with an opioid manufacturer at the Justice Department in Washington, Wednesday, Oct. 21, 2020.

In the last four hearings, the committee has laid out the case against Trump and how he was at the center of the election fraud conspiracy which ultimately led to the deadly insurrection at the Capitol on Jan. 6, 2021.

The committee has presented evidence for how Trump ignored several in his circle who said his claims of election fraud were false, and then proceeded to pressure Vice President Mike Pence and state election officials to overturn the election in his favor.

Thursday’s hearing is the fifth of several that were supposed to take place in June. But now committee members are saying the process could go into July.

Committee Chair Bennie Thompson, D-Miss., told reporters that today’s hearing will be the last for this month with more hearings to come after Congress’ July 4th recess. The House will reconvene the week of July 11, and Thompson indicated that’s the earliest hearings would resume.

Thompson said the new evidence the committee has includes hours of video footage handed over by a British documentarian who followed Trump, his family and aides, and conducted interviews with them, for weeks before and after the 2020 election.

Thompson also said there is “a lot of information to the tip line” that the committee has set up.

Where to watch Thursday’s hearing

You can watch the hearing starting at 3 p.m. ET on WITF.org. WITF will also carry NPR’s live special coverage of the hearings.