A video is played as an exhibit as the House select committee investigating the Jan. 6 attack on the U.S. Capitol continues to reveal its findings of a year-long investigation, at the Capitol in Washington, Monday, June 13, 2022. 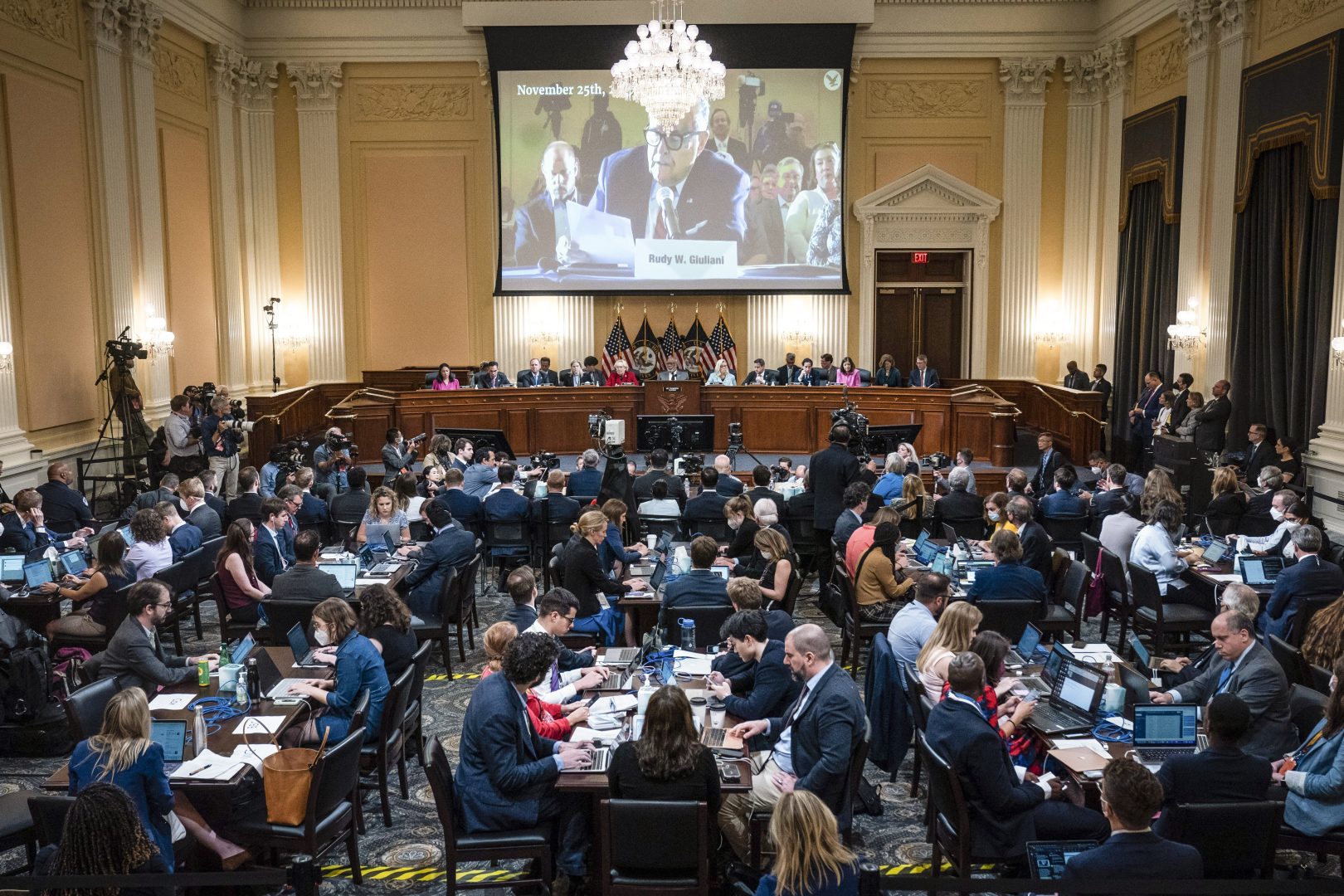 A video is played as an exhibit as the House select committee investigating the Jan. 6 attack on the U.S. Capitol continues to reveal its findings of a year-long investigation, at the Capitol in Washington, Monday, June 13, 2022.

In the text messages, Perry encouraged Meadows to talk to Jeffrey Clark, an assistant attorney general at the Department of Justice who was sympathetic to Trump’s plan to overturn the 2020 election. The two planned to advocate for Clark’s promotion to attorney general. A U.S. Senate report said Clark planned to say the DOJ was investigating Georgia’s election results, despite no evidence to warrant a probe.

Congresswoman Liz Cheney, vice chair of the select committee to investigate the Jan. 6 Capitol attack,  said in her opening remarks on June 9 that Perry and other Republicans sought presidential pardons for their roles in trying to overturn the election.

A spokesperson for Perry called the notion of Perry asking for a pardon a “soulless lie.”

The committee is expected to call the following witnesses at today’s hearing:

Rosen: we said no to all of it.

Richard Donoghue, former Acting Deputy AG, mentions a false claim (told to him by Rep. Scott Perry) that Pa. had 205,000 more votes than voters. The same day, Perry called Jeff Clark, “the kind of guy who could really get in there and do something about this.” @witfnews #Jan6

"Congratulations, you just admitted your first step or act you would take as Attorney General would be committing a felony…" pic.twitter.com/wVG7zGoTmP

THIS. Donoghue wrote this, he says a direct quote from Trump to him: "Just say the election is corrupt and leave the rest to me and Republican congressman."

Texts between @RepScottPerry and Mark Meadows from Dec. 26, 2020 shared by the Jan. 6 Committee today @witfnews pic.twitter.com/4tWQPcTwR3

Donoghue details a call with Rep. Perry on December 27 — a call supposedly made on Trump's behest — in which Perry pushed quickly debunked claims of fraud in Pennsylvania pic.twitter.com/dF2HeaFQ6f

On Dec. 31, 2020 @RepScottPerry shared a 20 minute conspiracy theory video with Mark Meadows. (Link seems to be below). I believe the content of the video is something about the Italian government changing votes. @witfnews pic.twitter.com/bwLxpc2PSD

Former Acting Secretary of Defense Christopher Miller said he was instructed by Trump to reach out to Italian authorities about the satellite/interference conspiracy theory. @witfnews #Jan6Hearings

Cassidy Huthcinson admits in testimony to the Jan. 6 Cmte. that Perry contacted her.

A Perry spokesperson previously called the notion of Perry asking for a pardon a “soulless lie.” @witfnews #Jan6Hearings pic.twitter.com/4ZUMBgixId

Hutchinson, who was an aide to former Trump WH chief of staff Mark Meadows, testified that numerous House Republicans asked Trump for a presidential pardon.

Witnesses told the Select Committee that Trump considered offering pardons to a wide range of individuals connected to the President. pic.twitter.com/LRJat3Algf