Vice President Kamala Harris spoke at a community center in Homewood about Pittsburgh's progress addressing lead poisoning. Kim Clark Baskin, a clerk for the City of Pittsburgh, spoke with Harris before the speech about the issue. 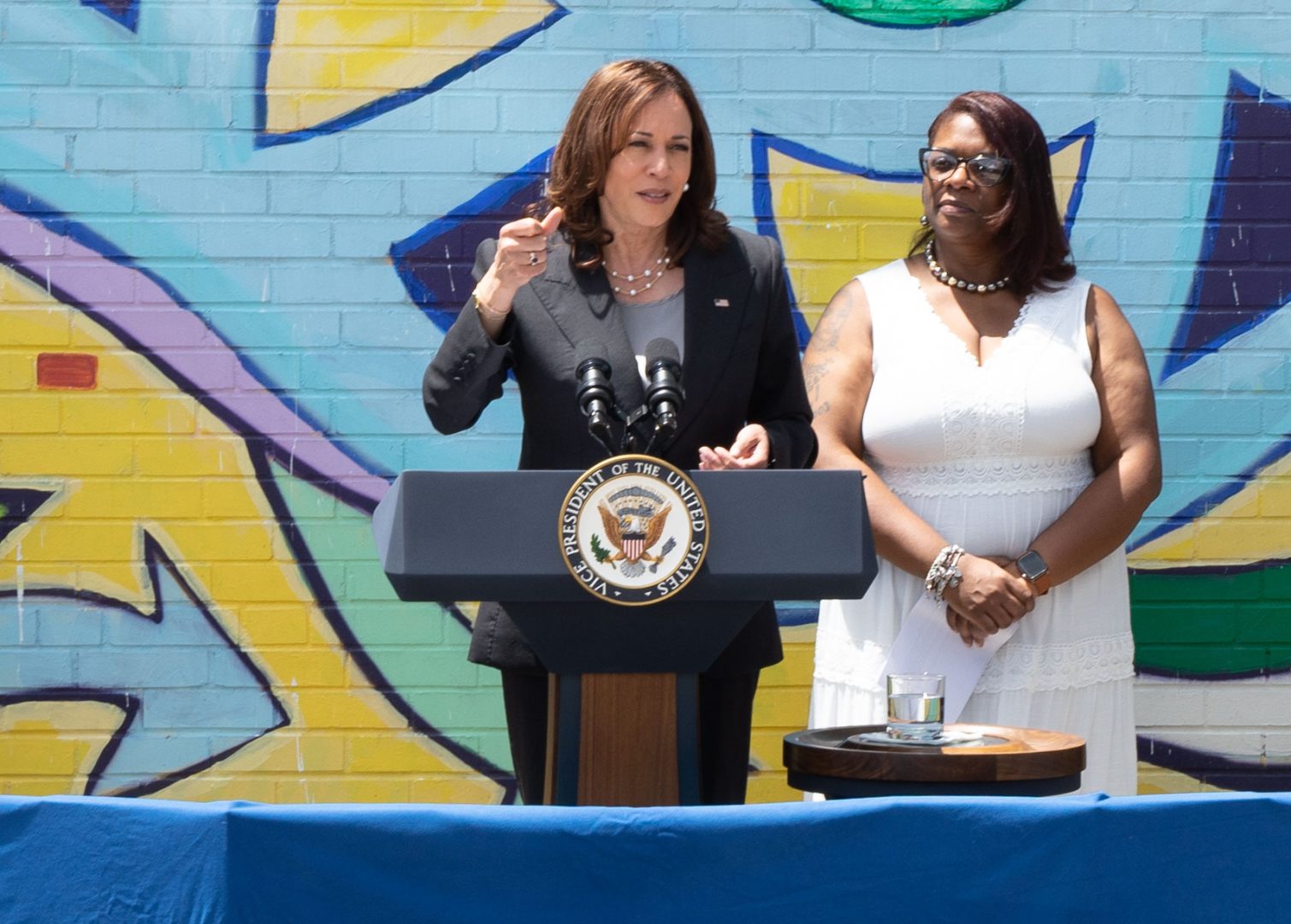 Vice President Kamala Harris spoke at a community center in Homewood about Pittsburgh's progress addressing lead poisoning. Kim Clark Baskin, a clerk for the City of Pittsburgh, spoke with Harris before the speech about the issue.

Six years ago, Pittsburgh city officials struggled to respond to drinking water contaminated with lead. But Vice President Kamala Harris put that memory squarely in the past during a stop in the Homewood neighborhood, pointing to the city as one of the country’s leaders in tackling lead poisoning.

The White House has set a goal to replace all lead drinking water pipes within 10 years, but the Pittsburgh Water and Sewer Authority is on pace to swap out its lead pipes in half that time. PWSA has also reduced the amount of lead in the drinking water by introducing a new water treatment, and lead levels are now well below federal guidelines.

Harris visited a community center in the Homewood neighborhood of Pittsburgh Friday to tout the White House’s effort to reduce lead poisoning. The $50 billion for water infrastructure in the bipartisan infrastructure bill was the largest infusion of federal money ever, Harris said. Fifteen billion dollars of that money is dedicated to replacing lead pipes that carry drinking water into homes, she said, and that’s due in large part to the efforts of advocacy groups.

“In large part, the work that we are doing is in response to the advocacy that has been coming out of leaders like the leaders here in Pittsburgh for years who have been demanding that we prioritize this as an issue,” she said.

Before her speech, Harris spoke to Kim Clark Baskin, a clerk for the city of Pittsburgh, who said that lead in the drinking water impacted the health of her son and father. An Allegheny County lead remediation program subsequently paid to remove all the lead from her father’s home, Baskin said.

The location of the speech, in the economically struggling neighborhood of Homewood, underlined Harris’ belief that government funding was needed because many of the people who need help the most couldn’t afford it. 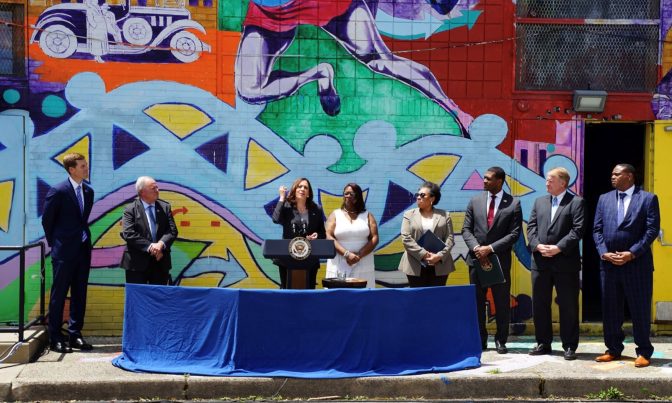 Vice President Kamala Harris speaks about lead poisoning alongside Pittsburgh local nelected leaders and the secretaries for the Environmental Protection Agency and the Department of Housing and Urban Development.

The Pittsburgh Water and Sewer Authority began replacing lead service lines in Pittsburgh after water testing in 2015 revealed lead levels above the EPA threshold. Even after PWSA was no longer required to replace lead lines, it has continued to do so with a commitment to replace all of the city’s lead lines by 2026.

Vice President Kamala Harris will be speaking at the Community Empowerment Association in Homewood this afternoon about the infastructure bill and abatement of sources of lead poisoning. pic.twitter.com/HkYPYs3wlh

The cost of replacing lead service lines and other major water infrastructure projects at both PWSA and the Allegheny County Sewer Authority have increased water bills much faster than inflation. PWSA has been recruiting low-income customers to its assistance programs to help lessen the financial burden. Other local water utilities either don’t have an assistance program or have had much less success recruiting low-income customers to sign up.

Marcia Fudge, the secretary of The U.S. Department of Housing and Urban Development, announced a $520 million grant program at the event, which can be used to address health hazards in the home, such as lead paint.

“We are announcing it here today because we know this community has stepped up in a way that so many have not,” Fudge said. “You have started to attack the problem, but we have a long way to go.”