Crozer-Chester Medical Center is one of Crozer Health's four hospitals.

The legislation was among a series of proposed bills that are intended to “deter private equity from abusing Pennsylvania health care systems in the future.” 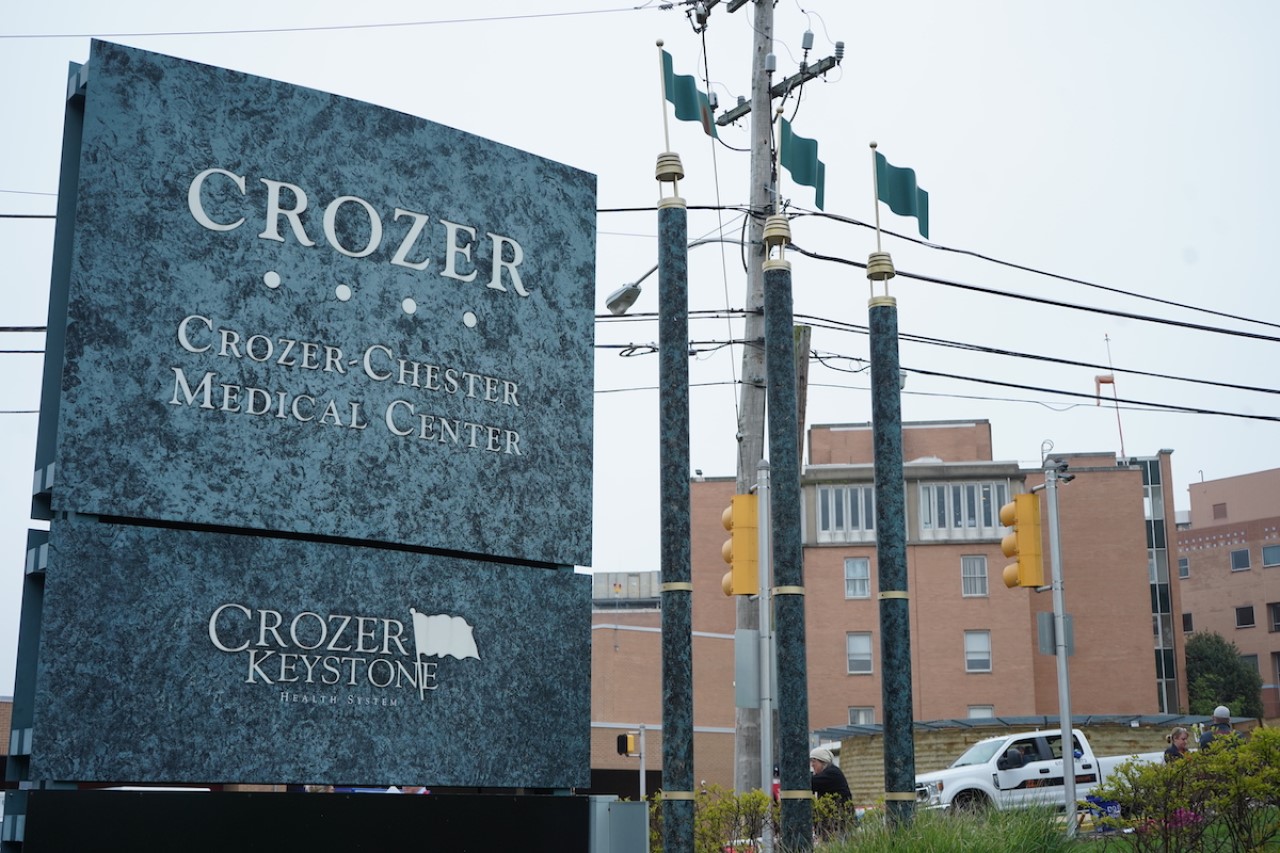 Crozer-Chester Medical Center is one of Crozer Health's four hospitals.

As the fate of Crozer Health hospitals remains tenuous, Delaware County elected officials unveiled a bill on Thursday that would prohibit for-profit entities from owning or managing hospitals in Pennsylvania.

That piece of legislation was among a series of proposed bills, announced during a press conference at the county courthouse in Media, which are intended to “deter private equity from abusing Pennsylvania health care systems in the future.”

“We’re here to send a clear message to predatory private equity firms and Wall Street looters, that their days of raiding our hospitals and nursing homes of their assets and then abandoning them to bankruptcy are numbered,” said State Sen. Tim Kearney.

Crozer has been on the cusp of a breakdown over the past several months. Vital wards have been closed, and many medical services have been shuttered across the four-hospital system. In April, the hospital system threatened to shut off paramedic service for municipalities.

While Crozer executives pointed to the pandemic as the cause of the financial troubles, state officials have blamed parent company, Prospect Medical Holdings, which bought the health system in 2016, and has a well-documented history of draining millions from its hospitals across the country. A similar crisis played out with Philadelphia’s Hahnemann Hospital, which opened in 1852, was bought by a California-based firm in 2018, and closed just a year later. 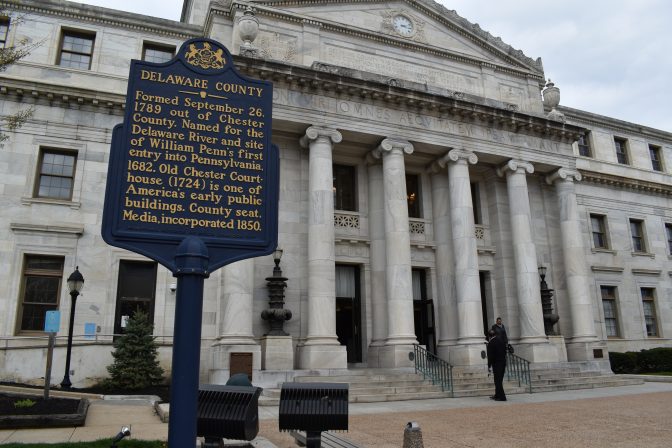 The Delaware County courthouse in Media, Pennsylvania, is seen on April 11, 2019.

In addition to keeping profits out of Pennsylvania health care altogether, the proposed legislation would:

– Require a 24-month moratorium on the transfer of ownership of a hospital, if one of the parties is a for-profit entity. The piece of legislation would also call for the Joint State Government Commission to study the impact of for-profit hospitals on Pennsylvania.

– Direct the attorney general to approve of any change in ownership of health systems.

– Mandate health system employers to provide a 90-day notice before mass layoffs as well as a minimum severance package.

Pennsylvania currently has no laws on the books that gives the state the power to vet or even block hospital deals. The private equity firm that previously held a controlling stake in Prospect was able to sell it to the company’s own executives while saddling the hospital chain with debt.

Kearney’s and his colleagues’ for-profit health care reform bills were modeled largely after Rhode Island’s regulatory set up. In fact, the Delco members of the General Assembly have been in constant contact with their New England counterparts.Kearney said he hopes the bills will prevent a crisis like the one facing Delco from happening anywhere else in the state.

“We’ve also talked to colleagues in California about some regulations as well that [they’re hoping] to put in place,” Kearney said.

While the memos in the state General Assembly have already been sent out, the legislation will be officially introduced in Harrisburg in the coming weeks. 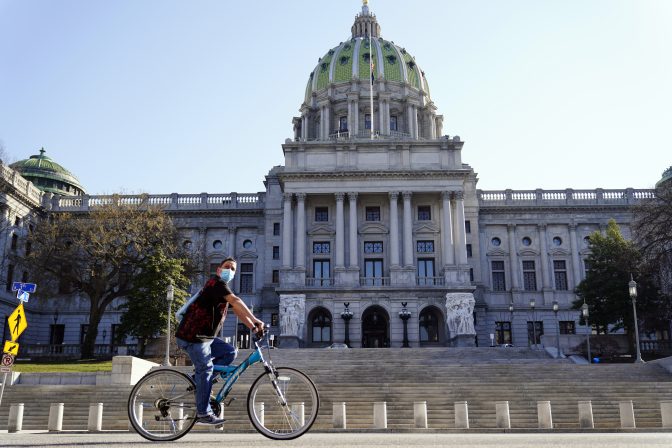 A cyclist rides past the Pennsylvania Capitol in Harrisburg, Pa., on March 22, 2021.  (AP Photo/Matt Rourke, File)

If passed, the legislation likely won’t have much effect on the current Crozer situation. But state officials said the bills are designed to prevent the next Crozer – or Hahnemann – from happening anywhere else in the Keystone State.

“We have an opportunity here to right many of the wrongs that have existed in one broken place. We need to get these bills on the floor in Harrisburg,” Zabel said.

Along with Kearney and Zabel, State Sens. Anthony Williams and John Kane, alongside State Reps. Jennifer O’Mara, Leanne Krueger, and Gina Curry, were joined at their press conference by health care workers and members of the public.

Delaware County Council Chair Dr. Monica Taylor said that the county is doing everything in its power to keep Crozer’s services open by continuing to have discussions with the health system and Prospect, while ongoing litigation plays out.

“We shouldn’t have to take legal action to ensure a health care system provides vital care to the residents that it serves,” Taylor said. “The county has immense concerns about the devastating impact that the sudden loss of critical services would have on our community.”

Jaime Blair, an organizer from Put People First! Pennsylvania, is part of a statewide grassroots organization of people in 44 counties, who are advocating for legislation to prevent hospital closures. Blair told WHYY News that there are 16 rural hospitals across the state at risk of being shut down. She said she wants a more organized nationwide response to the ills facing health care in the U.S.

“We know people on or excluded from Medicaid are hit hardest as hospitals that serve poor communities are targeted first for closures because profiteers can’t make as much money off of them,” Blair said.

She also highlighted a bill recently introduced in the state House calling for the establishment of an Office of the Public health Care Advocate which would be housed in the Attorney General’s office.

Peggy Malone, president of the Crozer-Chester Nurses Association, said she was “grateful” to see the elected officials standing up to Prospect.

However, she said that Crozer is still in a rough patch especially in the behavioral health and substance abuse units. Malone said that it is imperative that the patients still receive care beyond summer negotiations — and litigation — between the county and the company.

“We just want to make sure that this is sustainable. We are really hopeful that the sale with ChristianaCare goes through and Prospect Medical leaves, and then we can rebuild a hospital to the way it was before,” Malone said.

Earlier this week, ChristianaCare announced that it was purchasing Jennersville Hospital in Chester County from Tower Health. Malone said she is still optimistic that ChristianaCare can still follow through with its interest in also acquiring Crozer.

Why visiting a museum is good for your health.