Pennsylvania’s Capitol building in Harrisburg on the morning of Election Day 2020.

The push for more local control is likely to face an uphill battle with fellow legislators, as Pennsylvania has some of the laxest state campaign finance rules in the country. 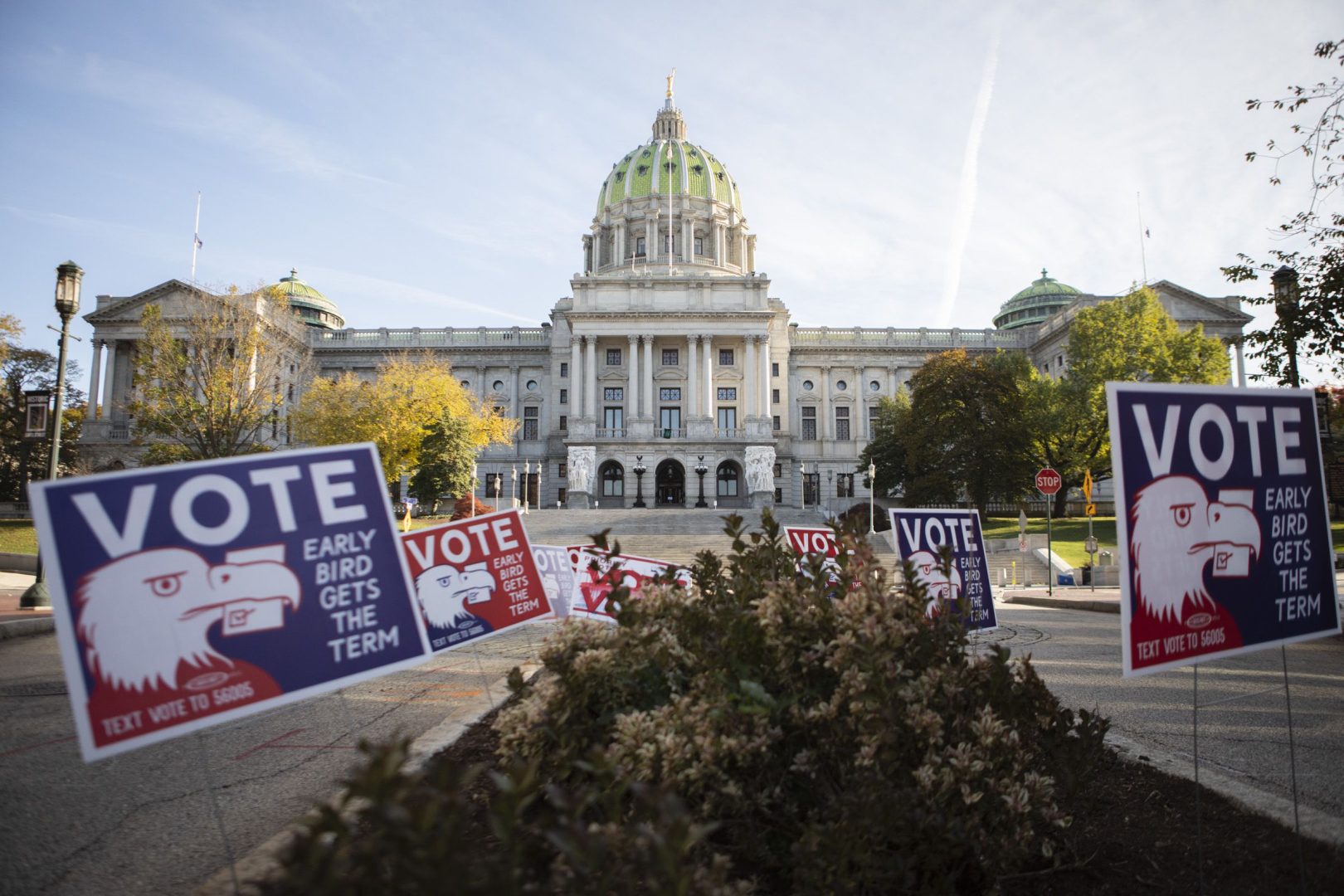 Pennsylvania’s Capitol building in Harrisburg on the morning of Election Day 2020.

(Harrisburg)— Over the past few years, megadonors and special interest groups have flooded Pennsylvania campaigns with millions of dollars in contributions.

One Pennsylvania lawmaker wants to change that, and plans to advance a resolution petitioning Congress to give state lawmakers more power to regulate the influx of outside cash in federal elections.

But the push for more local control by state Rep. Meghan Schroeder (R., Bucks) is likely to face an uphill battle with fellow legislators. Pennsylvania has some of the laxest state campaign finance rules in the country, and calls to tighten them have been ignored for decades in the legislature.

Schroeder’s resolution urges Congress to enact a “For Our Freedom” amendment to the U.S. Constitution to give state lawmakers the “authority to regulate [independent political spending] as they see fit in their respective jurisdictions,” according to a memo she circulated earlier this week to colleagues.

The proposed amendment would trump Citizens United v. FEC, the landmark 2010 U.S. Supreme Court decision that, along with subsequent rulings from the high court, allowed for the creation of super PACs — political action committees that can accept unlimited amounts of money from donors, unlike their PAC counterparts.

Craig Holman, an expert on campaign finance policy and a lobbyist with the consumer advocacy group Public Citizen, said states can control super PAC spending on state-level elections, but no one can control their spending at the federal level because of “poor reasoning” from the U.S. Supreme Court.

Holman said the court mistakenly believed that outside groups were incorruptible if they were “unaffiliated with candidates.”

Now, it is clear that is not the case, he said.

Super PACs are able to spend an unlimited amount of money on elections as long as they do not directly coordinate with a candidate. To bypass this rule, super PACs will indirectly support candidates by funding expenses such as advertisements, polling surveys, and more.

According to nonprofit watchdog OpenSecrets, about 2,000 organized super PACs have reported nearly $1.1 billion in total spending nationwide already in the 2021-2022 election cycle, as of June 7.

The amendment would not set any restrictions itself, but it would give state elected officials the ability to set rules on federal elections within their respective jurisdictions — which would include spending by super PACs.

“I believe the General Assembly in this commonwealth should have the ability to regulate the roles and transparency that govern our campaign finance systems,” Schroeder said at a news conference in the Capitol this week.

A report published by American Promise, a national nonprofit organization backing the amendment, found that the lack of local control over outside spending has led to hundreds of millions of dollars from out-of-state donors pouring into Pennsylvania’s U.S. Senate races in recent years, making it more difficult — and expensive — to win an elected office than ever before.

It warned that donations from these organizations — including so-called “social welfare” groups that aren’t required to disclose their donors — can distract voters from issues and increase attack ads at the expense of informational ones.

The report cites the 2016 U.S. Senate race as an example of outside donors influencing a Pennsylvania campaign.

Candidates competing in both the primary and general election received $120 million from super PACs, of the $170 million raised overall in that election.

With Pennsylvania set to be a key state in this year’s midterm elections, the report noted, residents can expect out-of-state donations to intensify as Democratic Lt. Gov. John Fetterman faces off with celebrity heart surgeon Mehmet Oz, who has been endorsed by former President Donald Trump.

“Pennsylvania is not a playground for billionaires in the D.C. consulting class,” said Bill Cortese, executive director of American Promise, who joined Schroeder at the news conference. “Pennsylvanians deserve to determine who leads their state and who they send to Washington.”

Cortese said some outside spending comes from dark money groups, which aren’t legally required to publicly disclose their donors.

“We have no ability to trace [it]. We have no idea where it came [from],” Cortese said of that money, adding that foreign actors can exploit that opacity to influence elections.

If the Pennsylvania legislature were to approve Schroeder’s measure, Pennsylvania would become the 23rd state to pass a resolution calling for more local control over outside spending on federal elections.

A two-thirds majority in both the U.S. House of Representatives and U.S. Senate is needed to approve the language of any proposed amendment. After that, the amendment would be sent back to state legislatures for ratification. Then 38 states would have to ratify the amendment for it to be enacted.

The latest amendment to the U.S. Constitution — the 27th Amendment, which governs congressional pay — took more than 200 years to be ratified.

Back in Pennsylvania, before Schroeder’s resolution can even get to Congress, it needs buy-in from a state legislature that has not made meaningful changes to its own campaign finance laws despite numerous efforts over the years to toughen the rules.

The state has the power to regulate and pass campaign finance laws regarding its state-level elections, according to Holman. However, Pennsylvania, unlike most other states, places no monetary limits on political contributions. Donors to high-profile statewide campaigns can — and do — make six and even seven-figure donations to candidates.

There are also few constraints on how campaign money can be spent, and no mandates to disclose details about how candidates choose to use those funds.

Bills to change the system have been introduced in nearly every two-year legislative session for the past decade, but have languished without even a hearing.

When asked why there has been no action on Costa’s past proposals, DeFrank blamed state Senate Republicans.

“Because the bill never received committee consideration, Senator Costa has tried to introduce the plan as an amendment on several occasions to various Election Code bills that have come before the Senate, however, that was also blocked by the Senate Republicans from consideration,” she wrote in an email.

Erica Clayton Wright, a spokesperson for state Senate Republicans, said, “It is difficult to comment on something that has not been introduced. We have not seen language nor do we know if [it] will be introduced.”