No evidence’ that it was gas from PECO’s system, but investigation could take a year 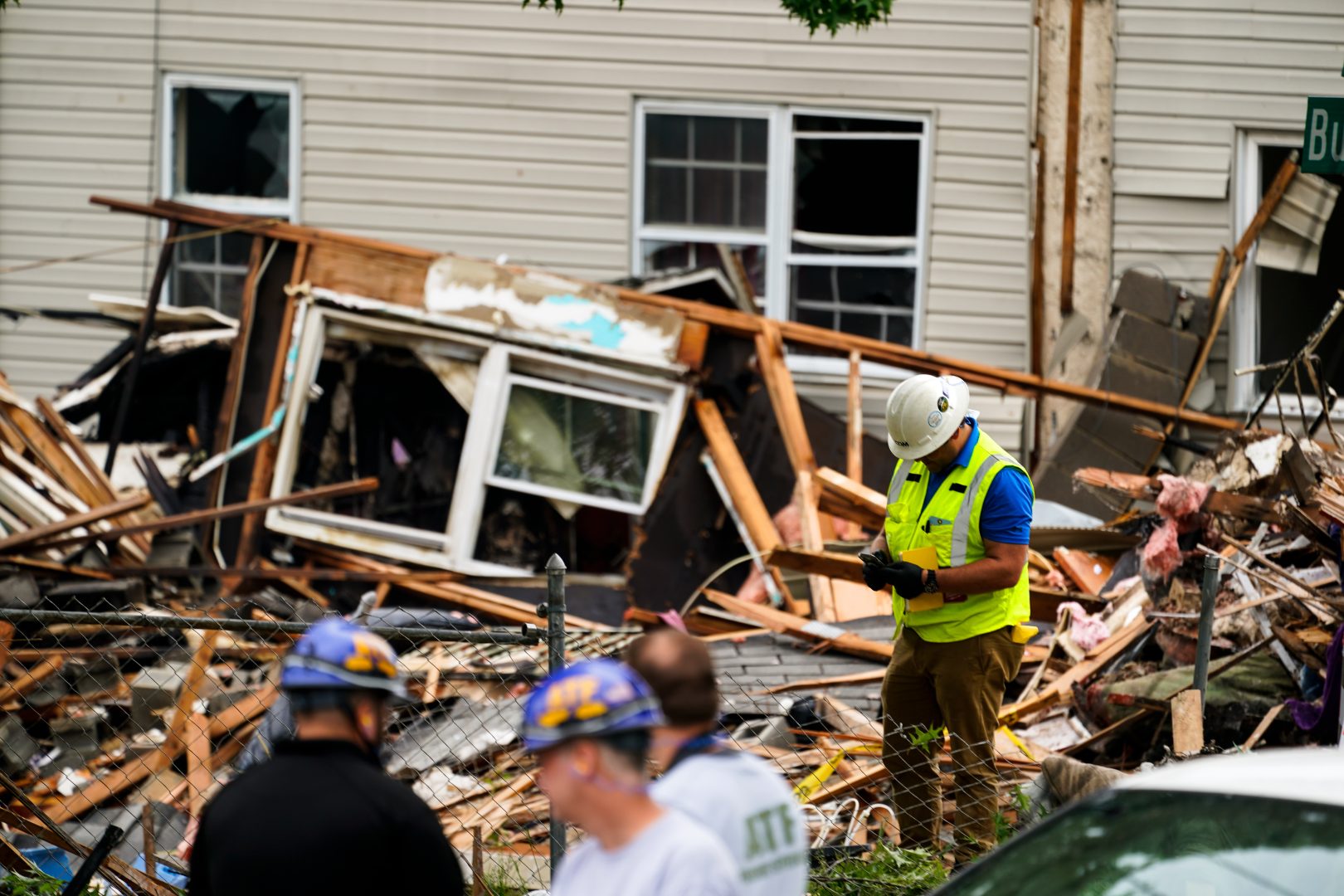 An investigation continues into the cause of a massive explosion in Pottstown, Montgomery County, which destroyed two homes and killed five people, including four children and their grandmother. The children’s two parents were injured.

The Pottstown Police Department is leading the investigation with the assistance of the Bureau of Alcohol, Tobacco and Firearms, the Pennsylvania State Police, and the Public Utility Commission.

So far, six houses in Pottstown were deemed “uninhabitable” by the Department of Licensing and Inspections, according to L&I Director Keith Place.

While the cause of the explosion remains unclear, officials have ruled out any type of drug activity, such as a meth lab.

Independent experts told WHYY that footage from the scene suggests that some type of gas is likely to blame.

“When you have this kind of mass destruction from an explosion, it’s usually going to be associated with some form of gas,” said Richard Kuprewicz, president of the energy infrastructure firm Accufacts. Kuprewicz has investigated pipeline explosions and often serves as an expert witness in related cases.

“It doesn’t mean it is,” he said. “You’ve got to run through the forensic analysis process.”

Kuprewicz said that could take weeks, or even months, to come to a conclusion.

“The science and art of forensic analysis of such terrible tragedies are well-established,” he said. “People have been killed. Houses were terribly destroyed. It takes a while to sift through all that destruction.” 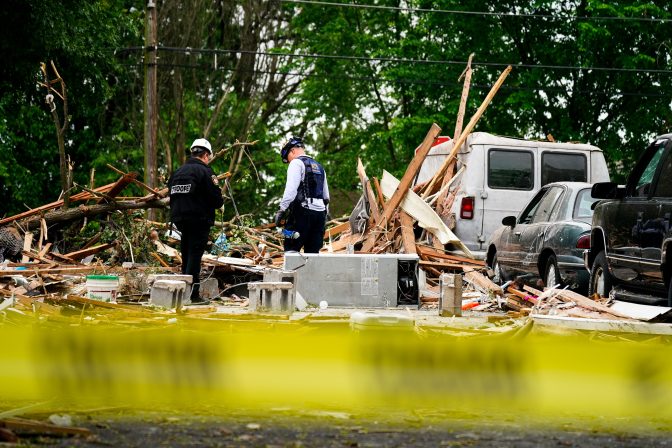 Investigators work the scene of a deadly explosion in a residential neighborhood in Pottstown, Pa., Friday, May 27, 2022. A house exploded northwest of Philadelphia, killing several people and leaving a few others injured, authorities said Friday. (AP Photo/Matt Rourke)

Neighbors reported smelling gas near the homes in the days prior to the explosion, which Kuprewicz says is not unusual in these cases.

While PECO has gas mains along Hale Street, neither the house where the explosion is believed to have occured, nor its adjoining twin home that was also destroyed, were connected to those pipelines through service lines. The company says it has since carried out excavations, pressure testing of the gas mains, camera inspections of the line, and call log analysis.

“To be clear, the investigations are ongoing, and we have not been advised of any final determinations by investigating authorities,” PECO said in a statement.

Kruprewicz said natural gas is lighter than air and will dissipate above ground. But, if it accumulates in an enclosed space, like a basement or a shed, and combines with the right amount of oxygen, it can explode. Often, it only takes a small charge from a light switch or even static electricity.

In the case of a gas main, Kruprewicz said a leak can travel underground horizontally through crevices, sometimes even tunnels dug by animals like gophers. In some cases, the odorant that is added to natural gas to warn of leaks will get absorbed by the soil.

“Those are the kinds of things that the investigators have to study and investigate in further detail, so that they can rule them out,” he said. “I’m not saying this was definitely a natural gas explosion. It could have been a propane explosion, which can be even worse because it has greater explosive force.”

What about propane? It’s a possibility that ‘has to be explored’

AmeriGas confirmed that a propane tank is on the property, and a company spokesperson said the propane supplier is continuing to cooperate with the investigation.

“We are devastated to hear of this tragic news and our hearts and prayers go out to this family and community,” said AmeriGas representative Brilynn Johnson in an email. “We look forward to seeing the results of the investigation once finalized.”

Kruprewicz said rarely does a propane tank actually explode. Instead, a valve can leak, and, unlike methane, propane is heavier than air and sinks to the ground, where it could find its way into a basement or other enclosed space.

“Being heavier than air, it is going to tend to flow like water to the lowest level,” he said “And then, if it reaches the right combustion mixture, it has an ignition source, it will explode. So, it’s just one of the potential possibilities that has to be explored.” 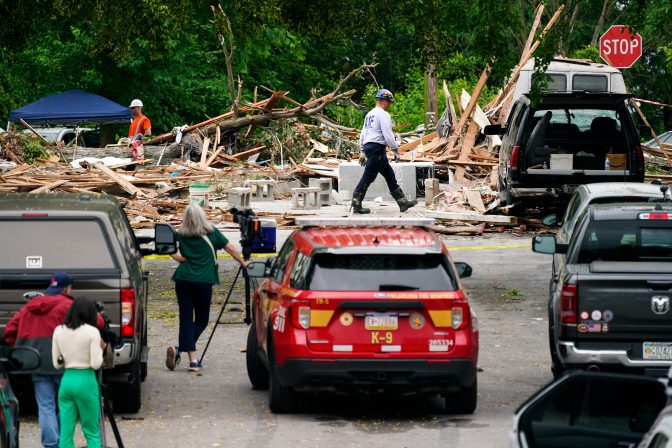 An investigator, center top, moves through the scene of a deadly explosion in a residential neighborhood in Pottstown, Pa., Friday, May 27, 2022. A house exploded northwest of Philadelphia, killing several people and leaving a few others injured, authorities said Friday. (AP Photo/Matt Rourke)

Investigation could take a year to conclude, PUC says

Investigators with the Pennsylvania Public Utility Commission’s Safety Division have been on site since the day of the explosion, according to a statement by PUC spokesman Nils Hagen-Frederiksen.In addition to aiding the investigation of the cause, the PUC is also responsible for determining whether there are any violations of state or federal pipeline safety regulations.

Hagen-Frederiksen said the investigation could take up to a year to conclude.

“It is important to understand that these are complex circumstances which may require extensive analyses by engineers and other experts, along with laboratory testing and other technical study before conclusions can be reached,” he said. 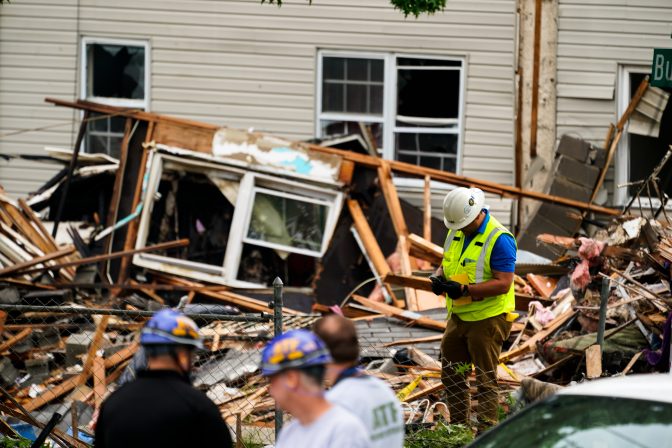 According to a Gofundme for the family, the father of the children who died during the explosion, Gene, was moved from the hospital to a rehabilitation facility on Friday, and the mother, Kristina, was still hospitalized on Friday, awaiting surgery.

The Tri-County Community Network is also raising money for the families impacted by the explosion.

Pottstown L&I finished inspections of neighboring homes Thursday afternoon, according to a statement from the borough, but it has not released its complete report. L&I Director Place hinted that more homes could be added to the list after a structural engineer completed inspections, according to a report from 6ABC.

Pottstown is now offering “courtesy” inspections for properties outside of the affected area. Residents can schedule a courtesy appointment by emailing or calling the Licensing and Inspections Department,

Editor’s note: AmeriGas is a subsidiary of UGI Utilities. WHYY CEO Bill Marazzo is on the board of UGI.